This morning, the Gender Equity, Safe Communities, and New Americans Committee heard from the Seattle Police Department about some key metrics they track on response times. The presentation gives lots of numbers and graphs. But as is almost always the case with data mining, the interesting story lies behind the data, if it can be teased out.

One key metric SPD tracks — because it’s been a national standard — is average response time for “priority one” 911 calls, from when the call is answered to when the police arrive at the scene. But as their data guru described, it’s now being recognized nationwide as a poor metric for understanding police behavior and for improving it.

You get a picture of how messy this is by simply looking at the list of records that needed to be excluded from the analysis: 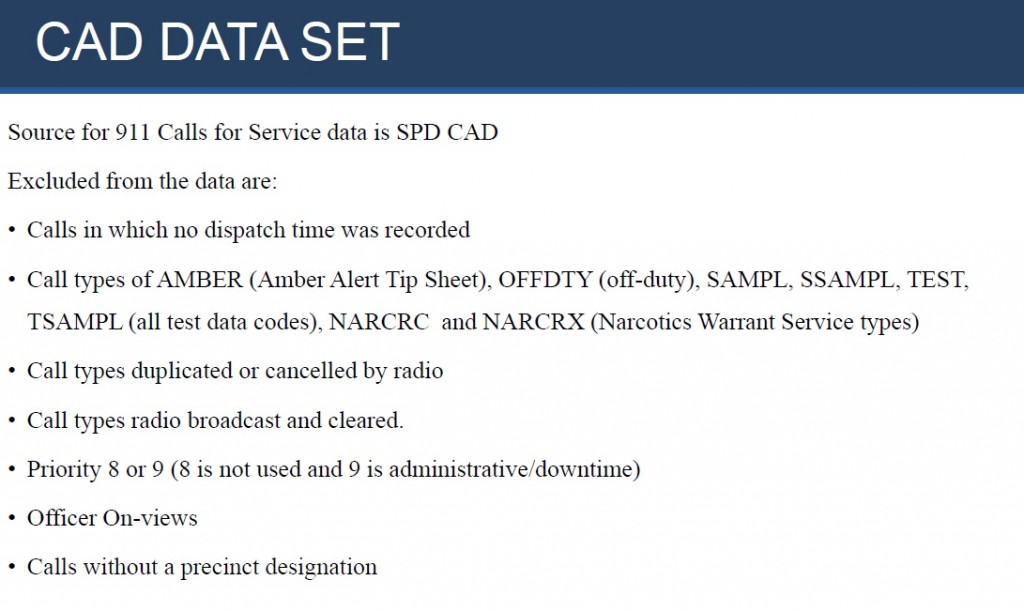 This doesn’t even start to touch on things like traffic conditions — one can certainly imagine that even with the lights and sirens it would take police longer to respond during rush hour than in the middle of the night (and increasing traffic might explain a good chunk of response time increases over the past five years).  So to truly understand this data we’d need to overlay traffic conditions at the time of the 911 call. Or we can look at a pet issue for Council member Gonzalez: police response to domestic violence 911 calls:

The chart above shows that the response time for domestic-violence assault 911 calls is on average two minutes longer than all other assault-related 911 calls. BUT: it’s been fairly consistent for five years, which — as SPD testified this morning — means that there is almost definitely something systemic happening. Their hypothesis: the “mandatory arrest” requirement for DV assault calls means that two police officers are required, and it might be that the extra two minutes is taken up by waiting for a second officer to arrive.

So it’s complicated. The big takeaway is that we should refrain from drawing big conclusions from a small handful of metrics. It doesn’t mean that everything is hunky-dory or that there aren’t issues with police deployment or response; it just means that finding and understanding those issues requires deeper analysis. There are no easy answers.

Council member Burgess praised the SPD staff for being “refreshingly transparent” in their conversations about data and metrics, and for making data available to the public. He also pointed out that we deploy fire department resources very differently than police (fire deploy from stations; police are usually on patrol when directed to respond) so it’s hard to even make that comparison.

The SPD group doing this data analysis is also working on the long-overdue staffing and deployment study report. They testified this morning that they have received the preliminary report from the outside consulting firm, and are “digging deeply into it.” While they wouldn’t give a specific deadline for delivering the final report, they did say “in the first quarter we should have solid answers.”