This afternoon’s discussion of the ailing Pronto bikeshare system had a little bit of everything: split opinion in public comments, financial wonkiness, city staff being grilled, and one eyebrow-raising revelation. 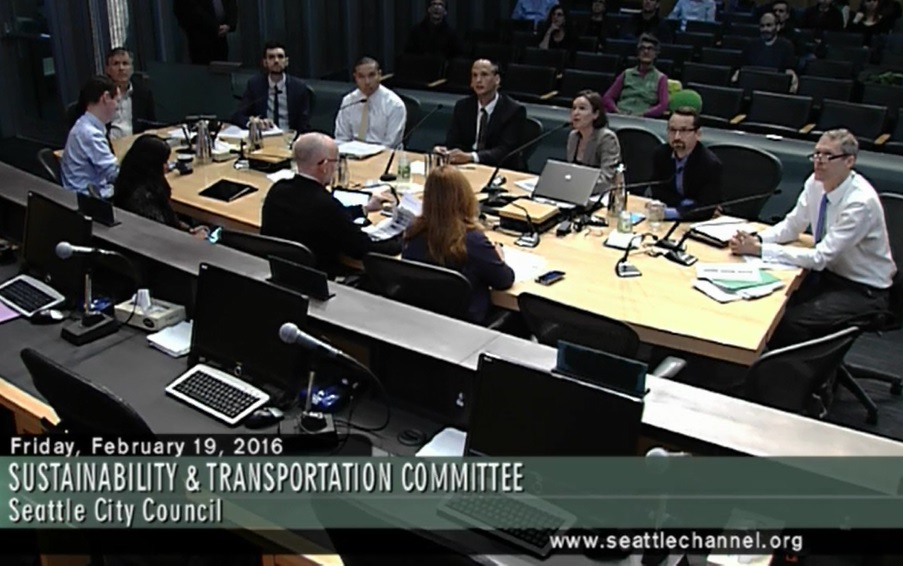 Sustainability and Transportation Committee Chair Mike O’Brien began the meeting by making clear that he was not expecting to get to an up-or-down vote today, but rather to advance the discussion and set things up for a vote at the next committee meeting on March 1st. Clearly the topic is attracting attention, because five of the nine council members were in attendance: O’Brien, Johnson, Sawant, Burgess and Herbold.

One nice thing about having a series of meetings on the same topic: the summary of “how we got here” gets shorter. For starters, here’s my writeup of the last meeting. In a nutshell: the bikeshare system was launched in 2013 in an arcane structure where it was owned by a nonprofit (Pronto) who in turn contracted the operations to a for-profit company (Motivate). Across the 500 cities that today have bikeshare systems, that is not a common method for organizing them. The three common methods are: owned by the city and operated by a non-profit or for-profit; owned and operated by a nonprofit; and owned and operated by a for-profit company. Each has advantages and disadvantages, but the mixed model chosen by Seattle results in the worst features of the other models: Pronto needed to borrow money to fund the purchase and installation of bikes and stations (bikeshare systems are capital-intensive), but the combined debt service and Pronto’s overhead costs left Pronto operating at a loss every year and unable to generate positive cash flow to fund further expansion. Because the built-out system wasn’t yet at critical mass in city coverage, it was stuck in a catch-22: it couldn’t grow revenues to build out further, and it couldn’t build out further to grow revenues.

Last October and November when the City Council was writing the city’s annual budget, SDOT let it be known that Pronto was operating at a loss, and asked for $5 million to fund further expansion of the system. The City Council wrote the $5 million into the budget, but with a proviso that SDOT needed to present a revised business plan and present it to the Council before the money would be released.

Earlier this month, SDOT brought to the Council the news that Pronto is insolvent, and won’t be able to pay its bills at the end of March. They proposed that the City spend $1.4 million of the $5 million in the budget to buy all of Pronto’s assets, essentially turning the bikeshare system into a city-owned program. SDOT would then put the operating contract out to bid again. But they argued that there are many potential business models that would be viable and rather than pick one ahead of time they would prefer to let companies responding to the RFP propose a revenue and business model for the program; this would give the city the most flexibility to choose among competing models. The problem: they wanted part of the money released now, for something other than expansion, and they didn’t have a business model as the proviso requests. And they need the decision in the next couple of weeks, because Pronto is about to go under. If it goes under, then the city would be responsible for repaying a $1 million federal grant that the program received to pay for bikes for the program. So either way, Seattle is paying at least $1 million to get out of this mess.

When the Council members heard this at the last meeting, it’s fair to say they were not pleased. They didn’t say “no,” but it was clear that they were far from saying “yes.” SDOT was asking for the Council to act on faith, and the track record of the program didn’t justify it. On the bright side, last year SDOT hired Nicole Freedman, who ran Boston’s bikeshare program; she brought experience and success (and she was the key proponent of SDOT’s new plan), but she was an unknown quantity to the Council. So they asked lots of questions and sent off Freedman and the SDOT folks with a pile of homework with a request to come back and present again today.

(ok, I’ll admit that didn’t seem like a short summary, but compared to watching hours of committee hearings and reading through a pile of government reports, trust me, it’s a breeze)

At the table today was Freedman taking the lead again, along with SDOT Director Scott Kubly, Calvin Chow from the Council’s central staff, and representatives from the city’s finance staff. They had clearly done their homework and knew their numbers. They made a forceful case that even without a detailed business plan, they could model the financials given the basic parameters of the system (bikes, stations, riders, capital costs, and user fees) and it all looks reasonable once you cut out the debt service and Pronto’s overhead costs. They also compared it to other cities (Freedman, to her credit, could recite the stats for several other cities mostly from memory) as a sanity check, and there wasn’t any obvious cooking of the books. Chow had worked with them to do a deeper look at Pronto’s financial history and on the looking-forward model, and while there were a few things that could use better explanations (e.g. whether the city’s in-house staffing really only requires .25 of one person’s time, as Freedman claims) the Council members didn’t manage to poke a lot of holes in it. In fact, Council member Burgess said he was very impressed with the financial modelling they had done – and Burgess is not easily impressed.

That was all relatively good news. The bad news – and the big eyebrow-raising revelation – is that back in November not only did SDOT know that Pronto was operating at a loss, they also knew that it was already insolvent. In fact, they gave Pronto $305,000 to keep it afloat until the end of this month so that they could put off the conversation with the City Council until this year. The most positive spin you could put on that move was that in November the Council focuses almost exclusively on the budget and would probably not have the time to look in-depth at how to move the bikeshare program forward. But you could also easily make the case that knowing that Pronto was already insolvent would have put their request for $5 million of expansion funding in jeopardy. Either way, the Council, and in particular committee chair O’Brien, was very unhappy to learn today that they knew about Pronto’s insolvency three months ago but withheld the information from the Council.

Overall the Council members present seem to be leaning towards supporting the purchase of the Pronto assets, making the program city-owned, and issuing a new RFP for operating it. Burgess said, “The issue for me is not whether to have bikeshare; I’m sold. It’s whether the city should be making the financial risk.” To that end, he pushed them on whether they could encourage organizations that respond to the RFP to be willing to share in the financial risk and/or to contribute capital toward the expansion costs. Burgess also noted that it’s really a $400 thousand question, since that’s the difference between paying $1.4 million to buy the program’s assets and run it, or shutting it down and repaying the $1 million grant.

Johnson pointed out that if the program is to go forward with expansion, a big question is what the goals are for that expansion since it affects many aspects of the program – not the least of which is station placement. Potential goals:

Johnson wanted assurances that SDOT and the Council could have a role in defining those goals before the RFP was sent out.

O’Brien requested them to come back on March 1st, and asked them to speak to three things then:

O’Brien ended the meeting by re-asserting that he hoped to get to a vote at the next meeting on March 1st — in time to save Pronto before it defaults on its bills at the end of next month.

A last note: the customary public comment session at the beginning of the meeting lasted almost an hour, and was split between those who support the program and those who oppose it. Clearly the program brings out strong opinions in the citizens of Seattle.

You can watch the whole discussion here.