Many of us heard about the Seattle homeless encampment known as “The Jungle” for the first time late last month when a double homicide occurred there. That same night, Mayor Ed Murray, King County Executive Dow Constantine, and Governor Jay Inslee agreed to a joint assessment of the site to gather data on the conditions there and the risks and hazards posed by its ongoing presence. That report is now in, and the City Council will be briefed on it tomorrow morning. And it’s far, far worse than you imagined. 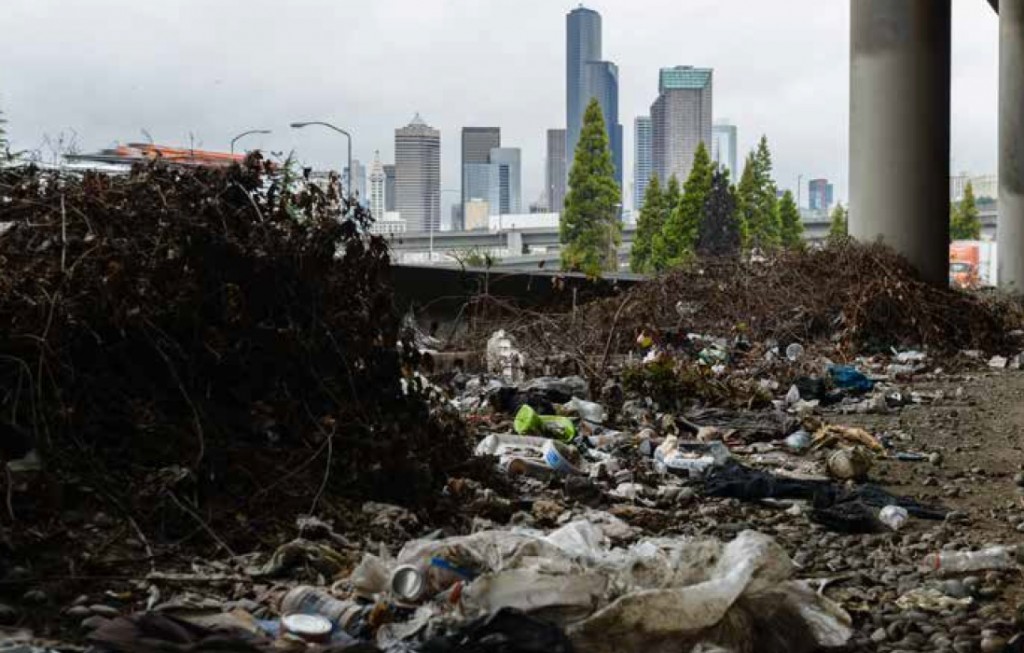 The assessment was done jointly, under the leadership of Seattle Fire Department chief Harold Scoggins, by several city departments, Seattle-King county Public Health, WSDOT (which maintains Interstate 5), and some local nonprofits who support the homeless with services. You can find their written report here.

First we should cover some basics, because the news reporting on the murders last month didn’t even begin to accurately describe the size and scope of this encampment. “The Jungle” covers about 150 acres under and adjacent to a 3-mile stretch of Interstate 5 (including greenbelt along the hillside next to the highway). The assessment team found 201 tents and other dwelling structures in the area, more concentrated in the northern half. And those were just the ones they could see; they know there are more in the wooded and overgrown parts of the hillside, and they know some residents pack up their tents and belongings during the day and return at night.

That bears repeating: 3 miles long. 150 acres. Hundreds of people living there. The Jungle is a small town, equivalent in population and size to three others in the state: Harrington, Prescott, and Spangle.

Except that The Jungle has no power, no running water, no sewer system, no sanitation services, and no on-site police or fire department presence. That’s not to say that SPD and SFD don’t go there: the fire department responded to calls there over 750 times in the last five years: 250 fires and over 500 medical issues. The police department responded over 70 times to reports of violent incidents over the same 5 year period, 17 of those were last year alone.

Without water and sewer services, human waste is dumped in makeshift latrine pits, in storm drains and catch basins, or sometimes just wherever. Likewise for food waste and hundreds of tons of solid waste (including used hypodermic needles). The human waste runs off into the storm drain system which dumps directly into the Duwamish River waterway. Rodent infestation and contamination is widespread, which contributes to the spread of disease. 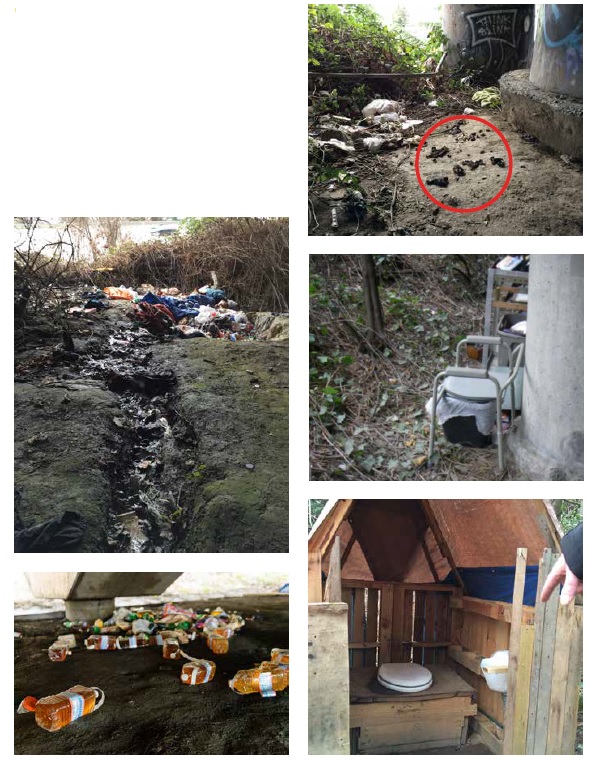 Propane tanks and butane canisters are also widespread, along with campfire sites. And the accumulation of downed trees, brush, and debris create a huge fire risk not only to the site itself, but to the Beacon Hill neighborhood up the hillside – and to the traffic on Interstate 5 above them. The concrete is burned in several places. 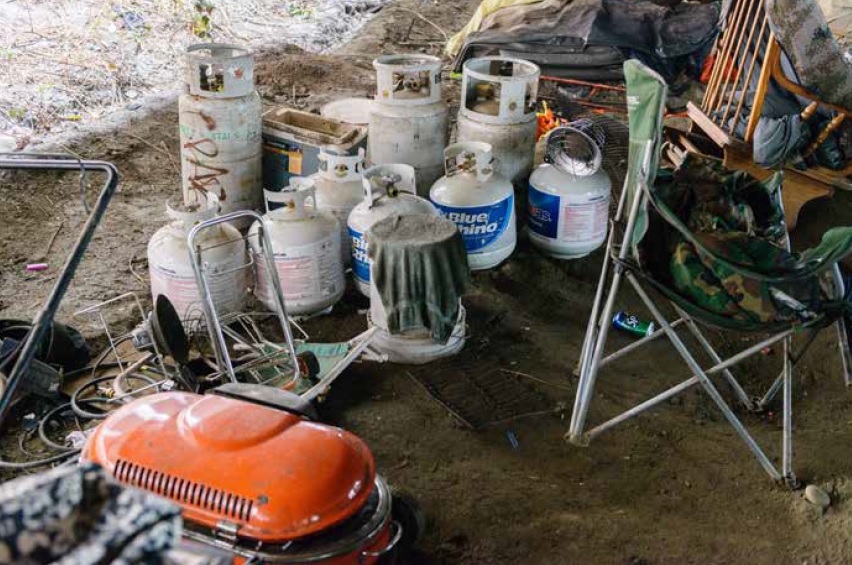 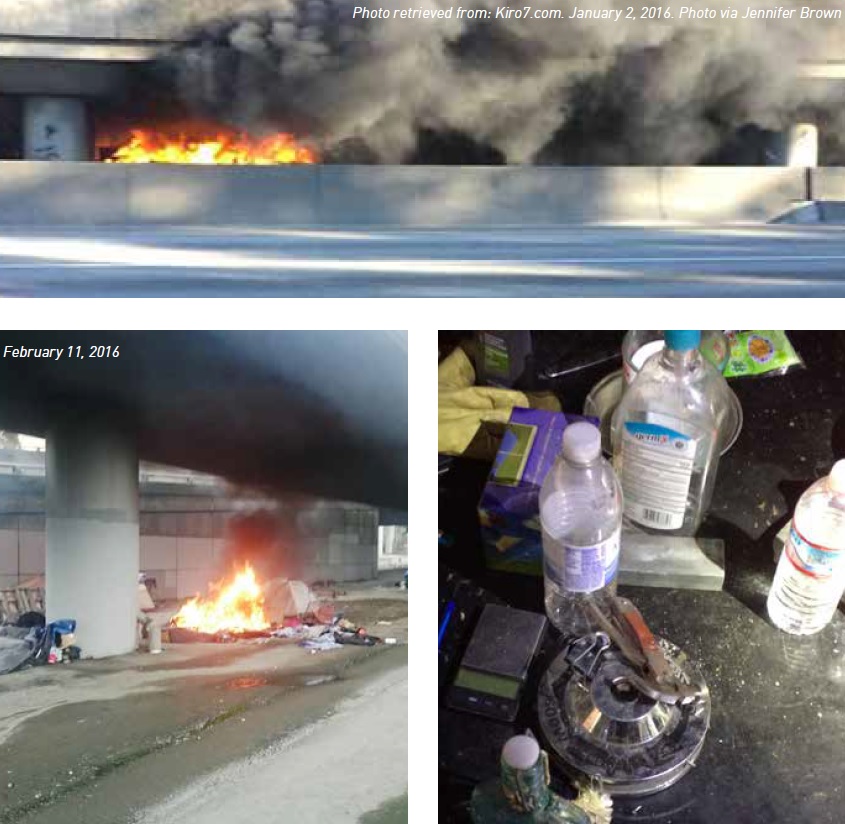 And on that note: accumulation of water, as well as the fires, have damaged the concrete infrastructure of the highway.

WSDOT maintenance crews need to get into the site regularly to keep the drainage system working correctly, inspect and repair road expansion joints, and look for wear on the structure. But fearing for their own safety – they report harassment and intimidation from the residents – they don’t go in without police escort. So I-5 maintenance in this 3-mile section, one of the most heavily trafficked in the state, is being deferred, even when it’s known that there is damage being done to the highway infrastructure.

Outreach crews also fear for their safety and often don’t go in without police escort, so people living their who are in need of humans services aren’t being reached.

The safety fears are warranted. Beyond the police reports, the assessment crew noted overt signs of criminal activity: drug sales, stolen bikes and electronic equipment, and drug use. The areas is also known for a high incidence of sexual assault. Even walking through there is hazardous, with human waste and used hypodermic needles scattered about. 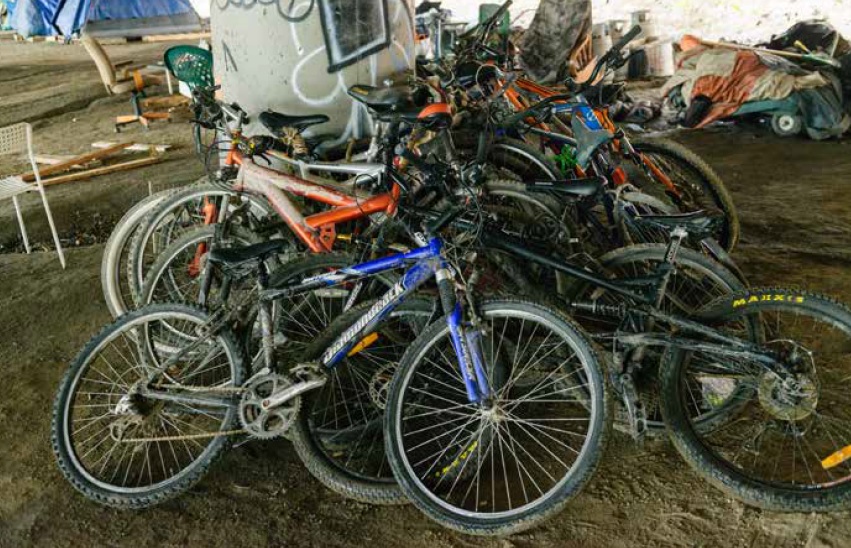 The Jungle is a human, safety, and environmental crisis — and tragedy — of enormous scale that threatens the people who live there, the neighboring communities, and everyone who travels along the highway above. That is now well documented.

The big question, filed under the category of “I don’t want those people’s jobs,” is: what does the city do about it? Even if you could convince the hundreds of people living there to all move to sanctioned shelters and encampments (which you can’t), all of those places are currently full; there is no capacity for hundreds more. We can’t evacuate the town; even if you could, there is no way to prevent people from just moving back in because the city can’t lock people out of the space and it can’t constantly patrol 150 acres over a 3-mile stretch. So do we start providing the services and turn it into, effectively, a sanctioned encampment for hundreds of people, with water, toilets, sanitation, and regular police presence? The scale of the effort that would take is mind-boggling. But the problem is so serious, and the hazards are so great, that something must be done. The city, county, and state can’t leave it the way it is.

That conversation gets real tomorrow. 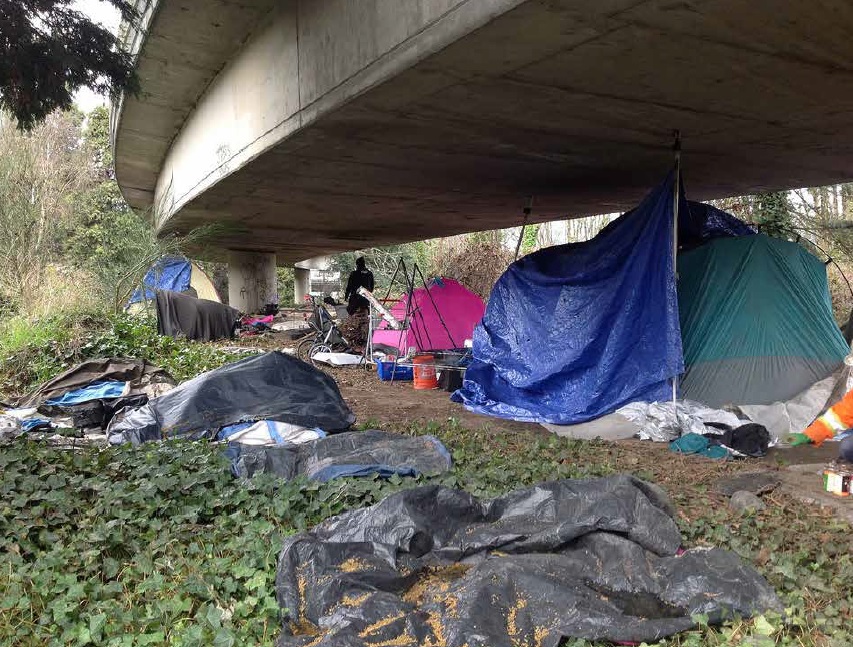 Photo credits: all photos were taken from the encampment assessment report.