The Sustainability and Transportation Committee held hearings this afternoon and this evening on the petition to vacate two blocks of Occidental Avenue in order to build the SODO Arena. And the sides lined up fairly quickly.

It’s worth beginning this with a refresher on the standard by which the City Council makes street vacation decisions. According to the policy, the Council must determine that to do so is in the public interest. There are three components that they must consider:

First: The City Council will consider the impact of the proposed vacation upon the circulation, access, utilities, light, air, open space and views provided by the right-of-way. These are defined by the policies as the public trust functions of the right-of-way and are given primary importance in evaluating vacation proposals. The policies require mitigation of the adverse effects upon these public trust functions. What constitutes adequate mitigation will be determined by the City Council.

Second: The Council will consider the land use impacts of the proposed vacation. A proposed vacation may be approved only when the increase in development potential that is attributable to the vacation would be consistent with City land use policies for the area in which the right-of-way is located. The Petitioner must provide specific information about what the vacation contributes to the development potential of the site.

Third: Proposed vacations may be approved only when they provide a long-term benefit to the general public. Vacations will not be approved to achieve short-term public benefits or for the sole benefit of individuals. Mitigation of the adverse effects of a vacation does not in itself constitute a public benefit. The petition must contain a specific proposal for meeting the public benefit requirement.

The petitioners, incorporated as ArenaCo, presented their petition at this afternoon’s meeting. They laid out the plan they envision for the site: 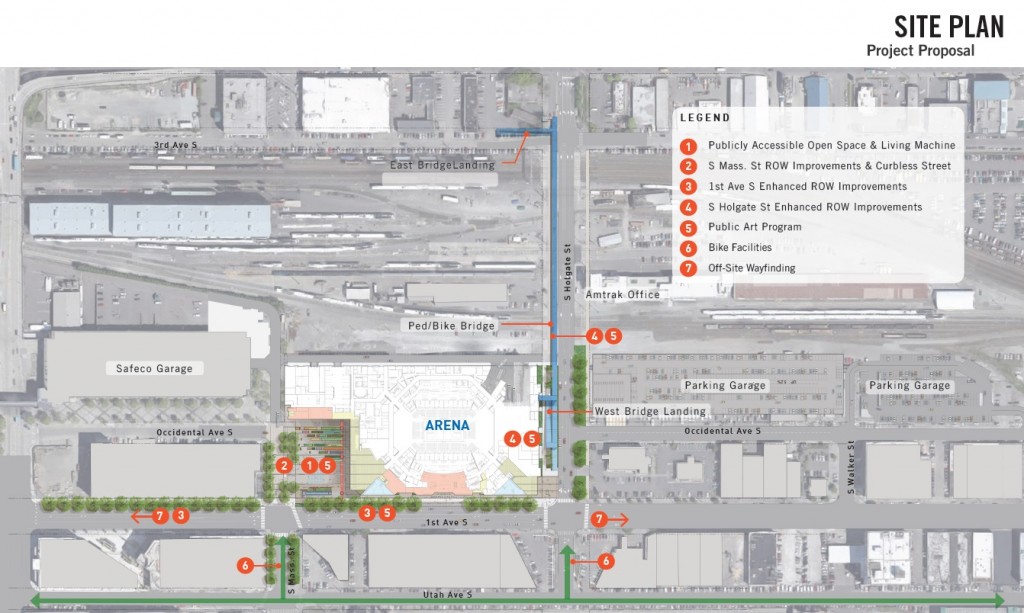 They took pains to highlight the public benefits that the city will gain in return for the street vacation. These include 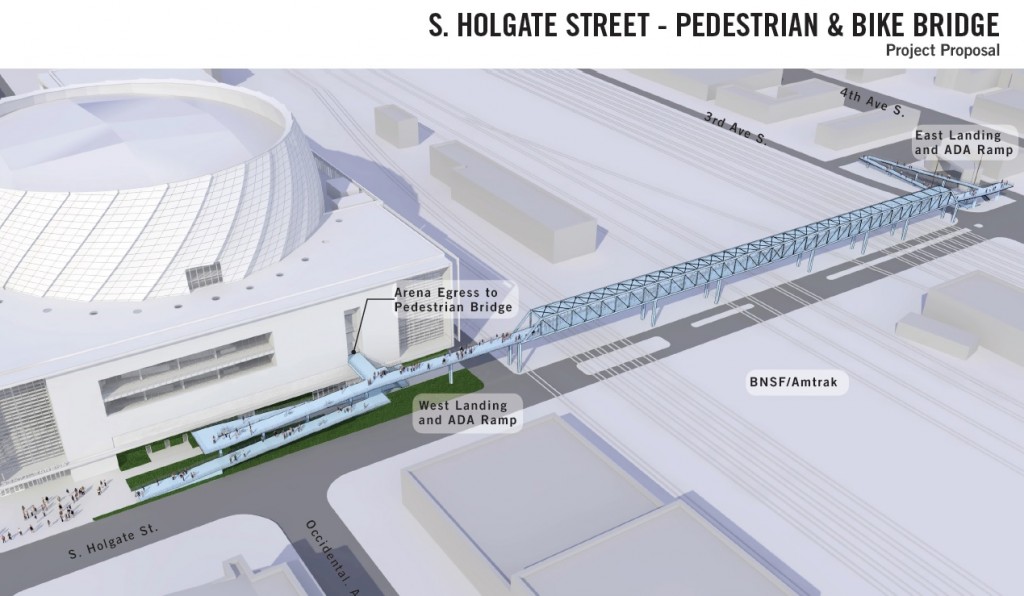 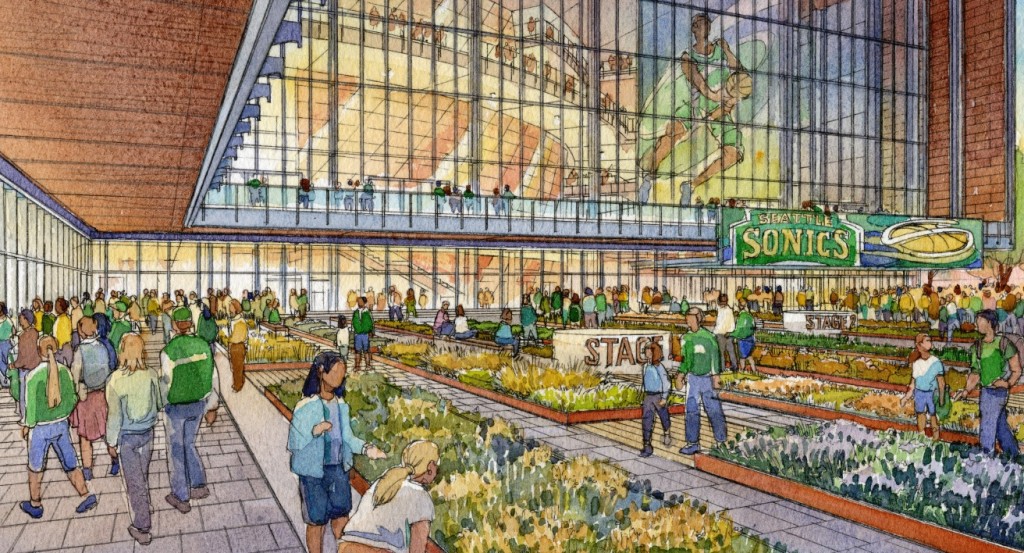 The public area features a “living machine” which will recycle stormwater and sewer water from the arena into “gray water” that will be used for a variety of uses in the facility.

So one question the Council needs to ask and answer is whether this is sufficient in return for vacating two blocks of street.

The bigger question, though, that the Council is being asked to consider is the impact upon traffic circulation in the area. In particular, representatives from the Port of Seattle are arguing that losing these two blocks of Occidental, and the extra traffic brought into the area by events at the area, will substantially impact freight traffic to and from the Port. Further, they are suggesting the impact will be so serious that it will cost the Port business and jobs. The counterargument by ArenaCo is that the arena events will be in off-peak hours during the evenings and weekends, and that since the capacity of the arena would only be 20,000 people (compared to 47,000 for Safeco Field and 72,000 for CenturyLink Field) the disruption to Port traffic would be minimal. Also, the MOU contains a provision creating a SODO Transportation Infrastructure Fund which would prioritize projects to aid the Port of Seattle. 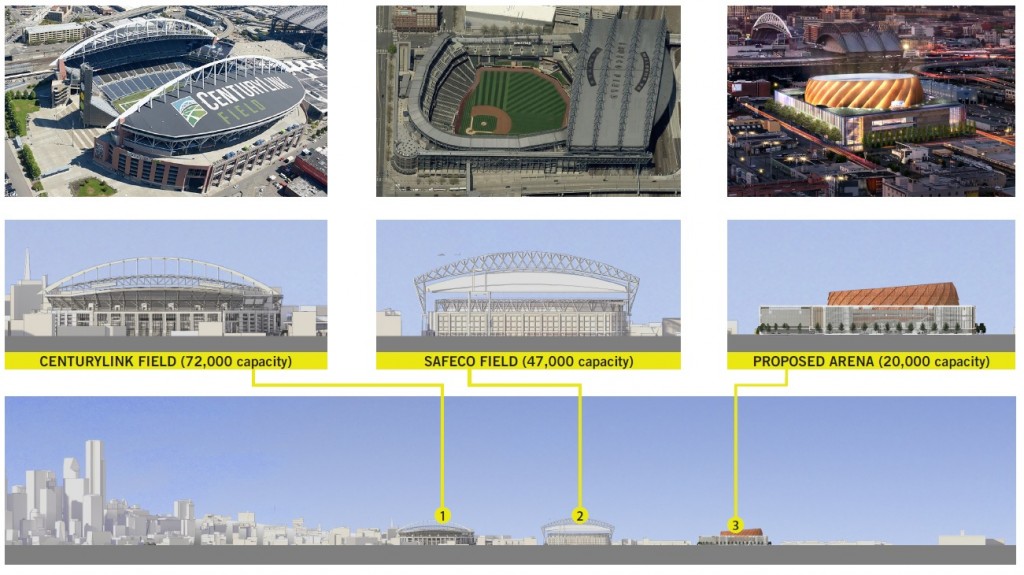 And that is the perfect lead-in to this evening’s hearing, a public comment session that drew a huge crowd overflowing into the Bertha Knight Landes Room one floor below Council chamber. All nine Council members were also present, which is unusual for an evening meeting and a clear indication that they all are feeling public pressure on the issue.

Sonics fans packed the place, wearing team garb. They spoke to how important the Sonics were culturally to Seattle and how badly they want the team back, and they reiterated the statements by Chris Hansen and the NBA that Key Arena, even remodeled, is not an option for an NBA team.  The opposition, in turn, was well represented by spokespeople for the Port of Seattle, unions representing port and freight workers, and the “Save SODO” movement. They painted a dire picture of what would happen to the Port and their jobs if the Arena were created. They also repeatedly suggested that since there is currently no NBA team — existing or expansion — identified that would move to Seattle, it is premature to approve the street vacation petition and argued that the Council should put it off until a future time while further exploring the latest study on future uses of Key Arena.  A few even went as far as to describe this as an epic battle between two futures: one with a strong maritime industry in Seattle, and one that turns SODO into a entertainment district — implying that there was no way the city could have both.

The public comment session went for two and a half hours, and six of the nine Council members hung in there until the end. They didn’t hear much that hasn’t been repeated endlessly in the local press, but they probably got a better sense as to the depth of feeling in both camps.

The next hearing on the issue will be April 5th at 2pm, in which SDOT and the Port of Seattle will each present their views on the petition.