Yesterday we saw the Parks Department leadership demonstrate that they haven’t yet built a strong working relationship with the Council committee that provides oversight to their work, and how that can go wrong.  Today we saw what happens when a department — in this case, the Human Services Department — builds  a relationship that is close and comfortable. Too comfortable.

It is a rare day when I utter the words “Alex Tsimerman is right.” Today is a rare day, apparently. In this afternoon’s Human Services and Public Health Committee meeting, after HSD Director Catherine Lester gave her monthly report, Council resident gadfly Tsimerman picked up a copy of her slides and declared the report “b——t.”

He’s right, and it is. In fact, the whole exchange between Lester and Committee chair Sally Bagshaw was perfunctory, revealing the mutual admiration society that has developed between the two that is now interfering with Bagshaw’s ability to provide effective oversight of HSD.

Lester’s report has only seven slides:  two title slides, two pretty graphics, one slide with “Faces of Human Services,” and two slides with actual content. The first lists what has happened in Q1, according to Lester: 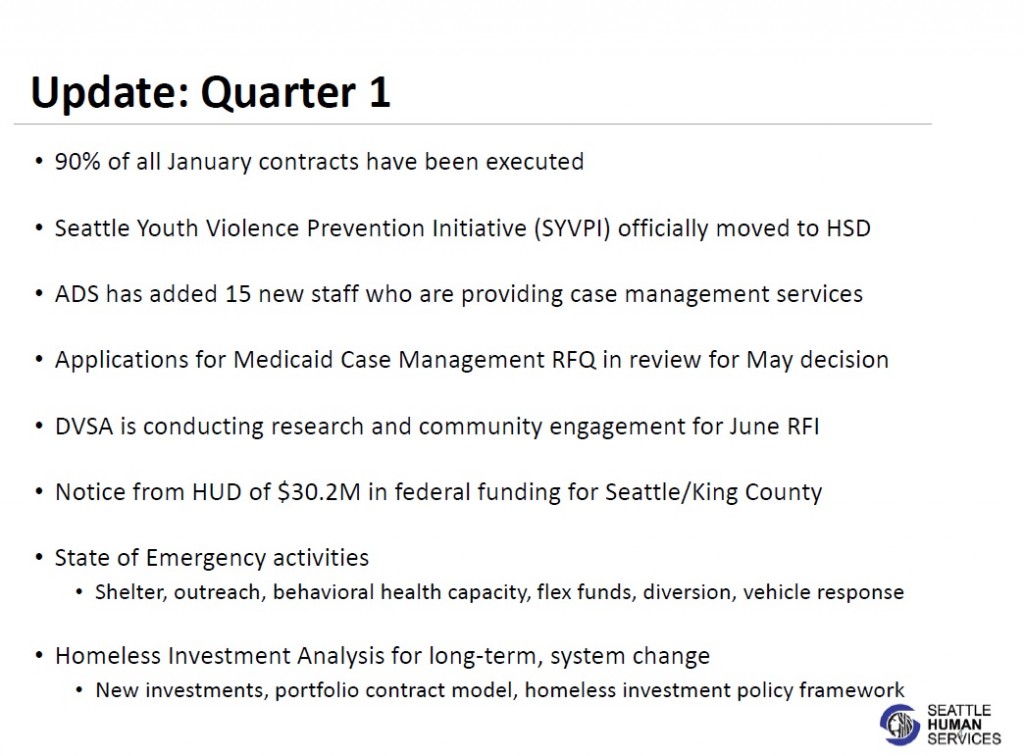 To recap: In mid-March, 90% of the January contracts have been executed (begging the question: how many of February’s?); there was a re-org; they hired some people; they are doing some work that should be complete in May and June; and HUD confirmed that they are giving Seattle and King County some money that’s already baked into HSD’s 2016 budget. Then we finally get to what should be the meat of the discussion: progress on both the short-term and long-term efforts to deal with the homelessness crisis — for which there are no details.

Lester did present a scorecard of “Making a Measurable Impact.” 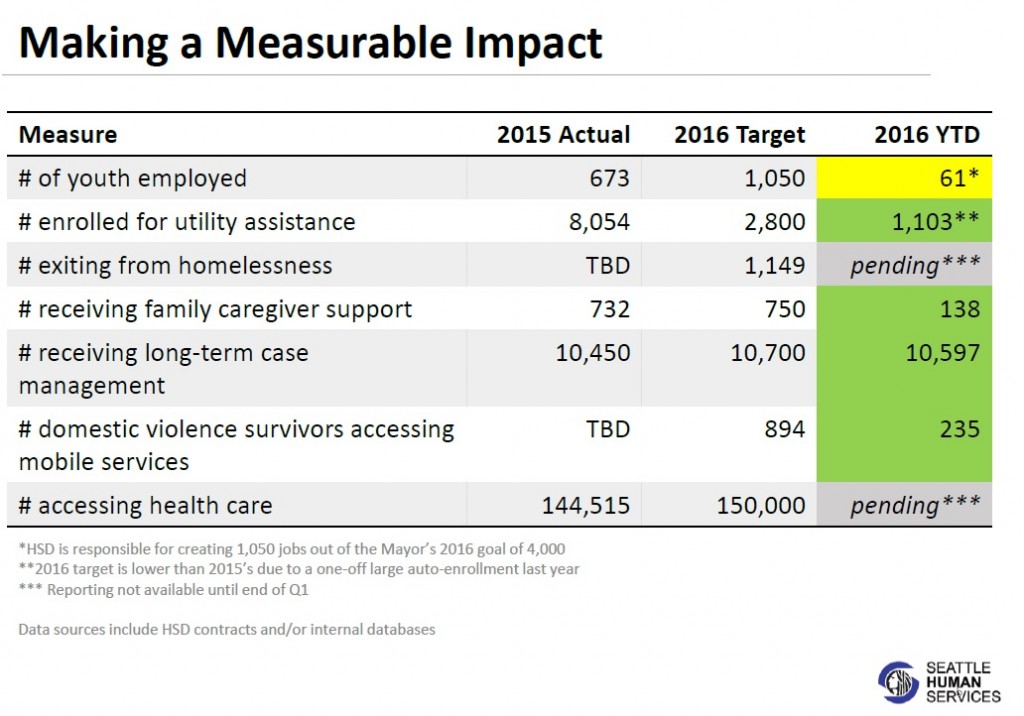 Of the seven metrics, two have no current data, and two don’t have data from last year. Of the others, “youth employed” is a misnomer because it’s really “youth internships;”  Lester explained that the vast majority are summer internships, not full-time employment. Only two actually represent outcomes (enrolled in utility assistance and exiting from homelessness), which Lester and Bagshaw have repeatedly claimed is the focus of the efforts vs. simply measuring the number of people in the system.

But more to the point: HSD is a sprawling organization with an annual budget of 130 MILLION DOLLARS. And this is the one and only slide with actual metrics that Lester chose to present to the Council committee charged with oversight. And only seven metrics. And it’s incomplete.

And she got away with it. Lester had to field few, penetrating questions. In fact, there were many signs that this was a “show hearing” devoid of serious critical thinking. Bagshaw admitted at one point that she was asking a “softball” question that she already knew the answer to. When she asked Lester what the Council could do to help her office and her personally with the homelessness response, Lester responded “That’s really sweet.” Lester gave vague, qualitative answers to most questions that were short on specifics, including as to when superstar consultant Barb Poppe, under contract to provide a report and recommendations on Seattle’s response to the homelessness crisis, would deliver her highly anticipated report. At another point, Basgshaw asked her “Are we comfortable that the data we’re getting from HMIS is consistent now, that we feel that it’s good data and information going in?”  Lester’s response:

“I think there’s been tremendous improvement in the data quality, and what I’m also really excited about is how the city is supporting the transition of HMIS to the county. That transition is happening this month and I think that it’s also going to allow us to integrate HMIS data with other data sources that give us a fuller package, such as data around corrections, data around mental illness and dependency of drugs, it’ll just give us a fuller kind of understanding of kind of the experience of an individual.”

This is a lovely vague non-answer and pivot to a different topic with better news. No follow-up from Bagshaw — she just let it slide.

I wish I could say this is a one-off, but it’s a trend. Here’s Lester’s monthly report for January. There wasn’t a monthly report presentation in February; it was skipped entirely (to be fair, Lester was asked to make more comprehensive presentations that month on the homelessness crisis, but that’s only one piece of HSD’s charter and budget).  Lester did mention today that HSD sends a monthly written report to Bagshaw, but I was unable to find it posted anywhere (I have asked Bagshaw’s office for a copy).  Lester also said that her department provides a biweekly report on the homelessness response and is setting up a Sharepoint site to allow Council members access to data, but none of that is publicly accessible without Public Records Act requests.

Here’s what is publicly accessible on HSD: their “dashboard” on the City of Seattle site. The dashboard is, in a word, a joke. Nothing for 2016 yet. The Housing numbers are all from 2014. Under Human Services, the metric for “emergency food and meals” claims to have met the 2015 goal, even though the most recent data point, November 2015, didn’t meet they year-end goal. The education metrics are even more bizarre; the “summer learning” metric claims to meet the July 2015 goal, even though the last actual data point is July 2014 (and doesn’t meet the July 2015 goal). Same for the “promote school readiness” goal. On “promote schoolchildren health” the last data point is March 2015, which meets the June 2015 goal so they apparently stopped tracking it then. The Civil Rights and Labor Enforcement metrics haven’t been updated since October 2015.

The closest thing to hard criticism in the briefing was from Council member Harrell, who observed that the city has done a poor job of explaining “the plan” for homelessness response so citizens believe it’s being approached piecemeal. He asked Lester to provide a 1-page primer on the plan that Council members and other city staff who get questions could use to explain it. Harrell is indeed right that they need to do that; but they also need to be far more transparent on what they are doing to execute on the plan.

The inescapable conclusion is that Bagshaw and her committee are failing to provide adequate oversight to HSD. Bagshaw has shown commendable enthusiasm for understanding the roots of the homelessness problem and partnering with HSD and King County to devise both short-term and long-term solutions, but she is leaving the impression that she has “gone native” and is far too involved with HSD to maintain her objectivity. Separation of powers in the branches of government is just as important for the City of Seattle as it is at the state and federal level. Bagshaw looks like she’s crossed the line.

All that said, HSD is a large department doing important, difficult, often underappreciated work. And it’s good that they are seeing the faces of the people they are trying to help; each one has an individual story and it’s well understood that understanding individual needs is critical to moving people on to a better place.

The State of Emergency that Mayor Murray declared related to homelessness is a clever mechanism for expediting a critical response, granting the executive branch additional powers. They have more control over allocating funds, and can skip the bidding process for procuring certain products and services.  But in such circumstances the need for thorough legislative branch oversight becomes even more critical, not less. We are asking HSD to run fast, but the price for more flexibility with contracts and dollars is additional transparency and competent oversight. The primary responder to the homelessness crisis, a department with a $130 million budget, is not being held to the high standard of accountability that is required of it. Sally Bagshaw is responsible for that accountability, and she needs to step up — and step back to regain an appropriate distance and objectivity.

You can watch today’s meeting here and draw your own conclusions.