This morning Council member Lisa Herbold organized a presentation and discussion on an aspect of affordable housing that has been chronically under-discussed and under-funded: preservation of existing affordable housing.

The conversation, which took place in the Affordable Housing, Neighborhoods and Finance Committee, was wide-ranging, but the problem can be neatly summed up in three slides. First, here’s the distribution of Seattle’s renters across income levels, and the number who are “severely cost burdened” meaning 50% or more of their income is going toward rent: 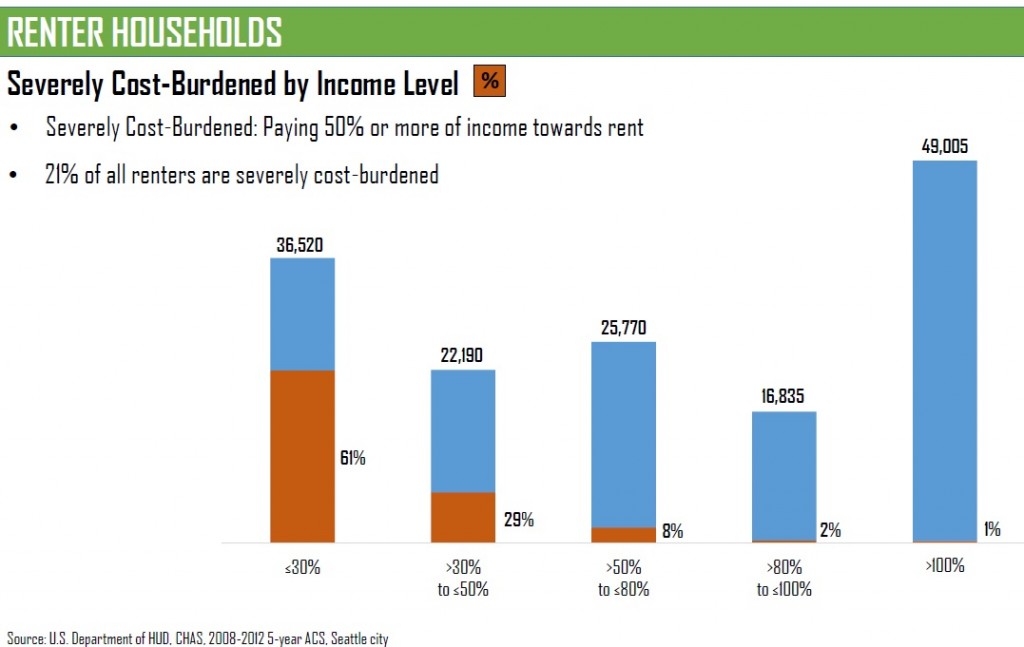 Here’s the distribution of apartment inventory in Seattle by rent: 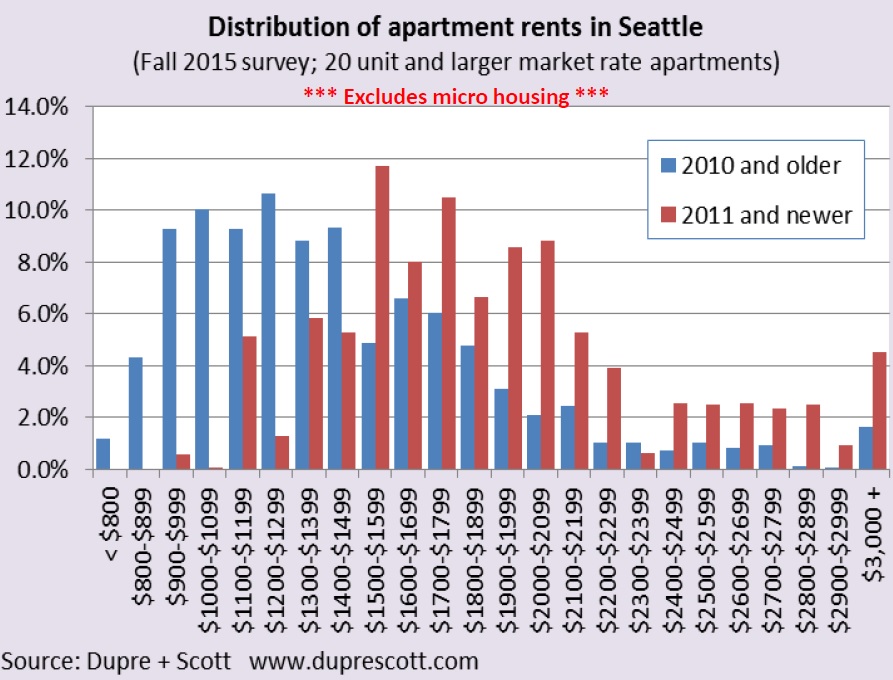 And here is what ties them together: matching income level with affordable rent:

There are several programs that prioritize providing housing for people below the 30% AMI threshold, since they are the most vulnerable and would nearly all be unable to find any housing without financial help. The current housing levy, and the Mayor’s proposed new one, both prioritize that group and devote the lion’s share of their resources to it.

But the workforce housing units are  in danger of disappearing: because they are older, and because market rates in Seattle are skyrocketing, there is strong incentive for building owners to tear down and build anew or to perform major remodels. In either case the new housing is rented out at market rate and the previous renters are displaced because they can’t afford the new rates.

Herbold’s intent with today’s discussion was to explore programs that would create incentives for building owners. In preparation she assembled a team, including members of her own staff, Puget Sound Sage, Homestead Community Land Trust, the Low Income Housing Institute, the Office of Housing and the City Budget Office. Together they created a memo laying out two ideas for programs:

The proposal put forth suggested a means to fund each of the programs (Herbold would like to see both created, as she sees them as complementary efforts).

As the conversation played out today, it became clear that the two conversations should be separated and sequential: identifying resources to allocate to address specific issues, and then matching them to programs. In reality it’s slightly more complicated than that, since the amount and timing of the funds required determines the sources, and some funds have restricted uses. But at a coarse level it’s a reasonable way to think about it, because there are two large buckets of money: the city’s General Fund, and the Housing Levy. There is a third source of funds that was also discussed today: the city’s bonding authority, which has several restrictions on its size and use but could potentially come into play as well. Office of Housing Director Steve Walker also pointed out that the city often leverages federal and state funds for housing projects, but those are often targeted at projects to benefit people making 60% of AMI or less, so they would likely not be available to supplement these programs.

Andra Kranzler from Herbold’s staff pointed out that the conversations around the 2016 Housing Levy ended with a consensus that it should continue to be focused on the 30% AMI level and below, though some of the Council members present seemed open to revisiting that. That will be a challenging conversation, since even with the dramatic increase in the size of the housing levy it is still insufficient to meet the needs of that demographic of renters. Funding preservation programs in the housing levy would take money away from the focus on the most vulnerable residents. The housing levy does a bit for preservation, but it is focused on preserving existing rent and income restricted housing already in the city’s portfolio, and acquiring and repurposing vacant buildings. The new programs proposed today would focus on affordable housing that is privately owned and currently occupied.

But Ben Noble, the city’s budget director, pointed out that the same financial issue exists if the programs use money from the General Fund: that is also a fixed pot of money, so any funds used for affordable housing preservation will be taken away from some other worthy city program.

There were other interesting aspects to the proposals today. Thanks to leadership from Council member (and committee chair) Burgess, owners of multi-family residential buildings are required to give a 60-day notice of their intent to sell the property, which gives stakeholders a chance to try to purchase it in order to prevent it from being gentrified. That is a powerful tool, but to-date there has been little put behind that to make the most of the opportunities that it brings to the surface.

Boyd Pickrell from Homestead Community Land Trust spoke to their efforts to support tenant buyouts of the building they occupy when they come up for sale, as one way to leverage the 60-day notice. They help tenant groups to organize, and provide a funding source that both enables a quick purchase and also prevents each tenant from needing to apply for a mortgage separately. Pickrell emphasized that home ownership opportunities are important for several reasons, including their “dual value” as both an essential service (housing) and an investment that appreciates over time.

Gonzalez also pointed out that the state legislature came very close to passing the preservation tax exemption, which would have helped tremendously.

Council member O’Brien said he was intrigued but had several questions that summarized the larger conversation that needed to happen:

O’Brien saw that big question  as “how do we preserve some of our existing affordable housing that currently is not subsidized, or maybe subsidized through other programs but those subsidies are going away?” He invoked the specter of rent control/stabilization vaguely, positioning these programs as a way to avoid it.

Herbold will continue to push the conversation forward to explore policies and options. She suggested creating a case study that would look at a range of options for providing financing.

It was a good start for a conversation on an important issue that is slipping through the cracks today, but the discussion has a long way to go. The timing of the 2016 Housing Levy will likely drive this as well, since that is currently the biggest pot of money aimed at housing and once it’s finalized for the fall ballot anything not in that proposal will be excluded from that pot for the next seven years.