This morning the Parks, Seattle Center, Libraries and Waterfront Committee heard a presentation on the recent tree cutting incident at the Duwamish Head Greenbelt in West Seattle, in which a lot of information was presented. Here’s a summary, in Q&A format.

Appearing in front of the committee was Jesus Aguirre, Director of the Seattle Department of Parks and Recreation; Scott Kubly, Director of SDOT; Joe Groshong of the City Attorney’s Office, and Ketel Freeman of the Council’s central staff. Both Parks and SDOT are involved because each manages some of the land where the trees were cut. 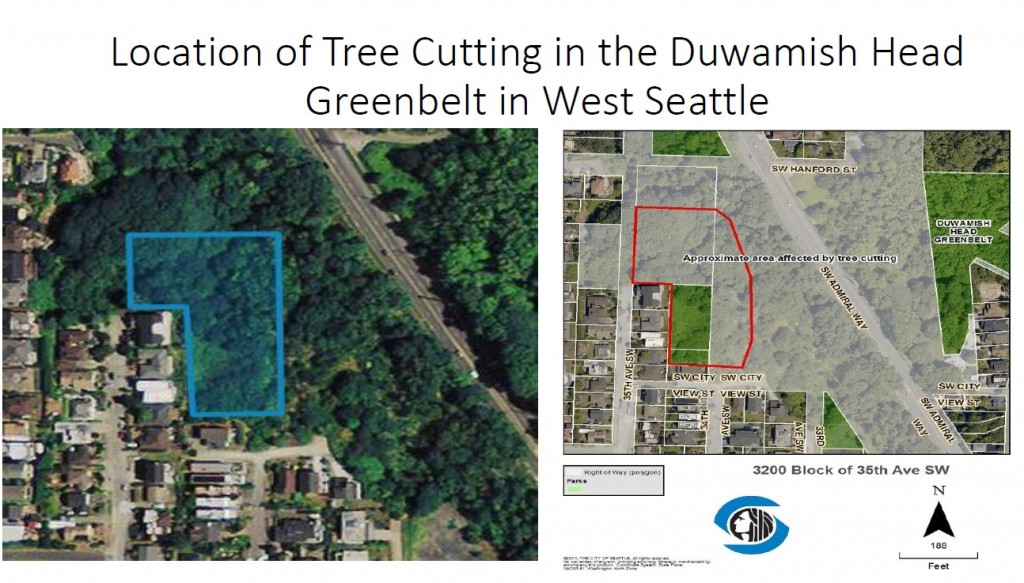 According to Parks Department Director Jesus Aguirre, the Parks Department has 6300 acres of parks and 2500 acres of undeveloped forested land. SDOT Director Scott Kubly didn’t specify how much land they manage in greenbelts and along streets, but it is also considerable. Much of it is hard to access and can’t be visibly inspected from streets. With limited staff, they are heavily dependent upon volunteer stewards (often organized through the Green Seattle Partnership) and complaints from neighbors.

Many neighbors who see tree cutting on public lands assume it is either city staff doing the work or approved under a permit issued by the city, so they don’t report it.

When someone finally did notice and report it, why did it take so long for the city to respond?

SDOT gets 2-5 inquiries per week related to trees, and they prioritize those for follow up. The highest priority are public safety issues such as a downed tree across a road. The second highest priority is permit inspections, i.e. when someone formally requests a permit to prune a tree on city property and city staff must come out and inspect the tree for propriety of the request. The third priority is reports of illegal cutting, though if the reporter says that the activity is actively going on they send an inspector out as soon as possible in order to try to catch the perpetrator in the act.

Council member Herbold suggested that illegal cutting in environmentally critical areas should be prioritized higher. Kubly said that there needs to be a response time for tree requests; currently SDOT has a 72 hour response time goal for pothole reports, but no goal for tree reports.

What are the penalties for the people who did this?

Joe Groshong from the City Attorney’s Office presented the following slide as a summary of the civil and criminal codes that the tree cutting may have violated: 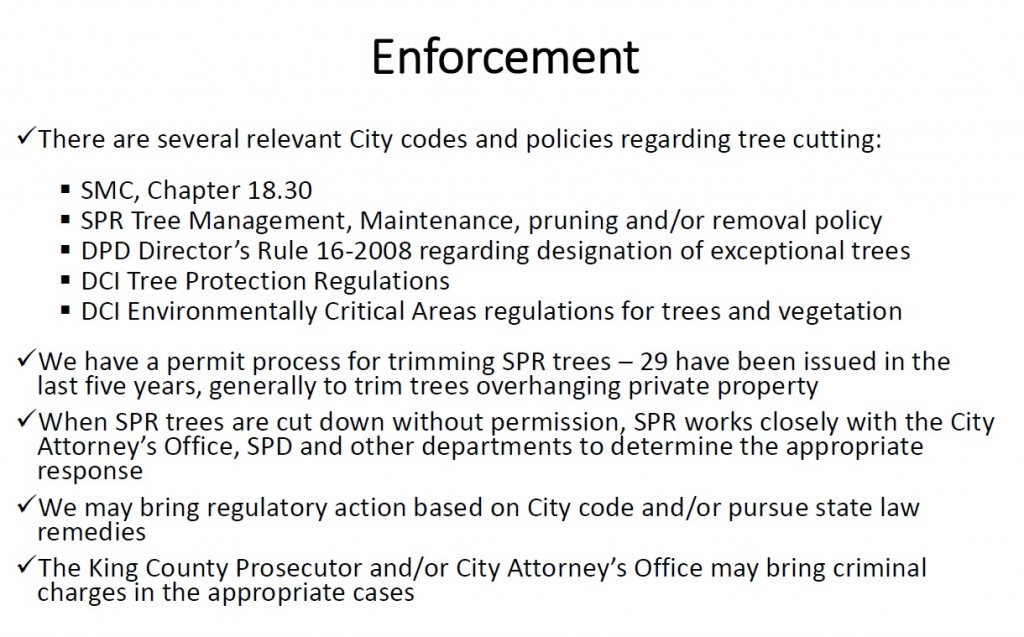 Also, the King County Assessor’s office has been asked to come out and re-assess the property values for approximately six houses whose views improved – which means they will likely pay higher property taxes.

What’s the current state of the investigation?

The City Attorney’s Office is conducting the civil investigation, working with SDOT, the Parks Department, SDCI and SPD to gather information. When they believe they have enough information they will proceed with civil and regulatory actions. The criminal investigation is handled by SPD; they let the City Attorney’s Office and the King County Prosecutor know when their investigation is complete, and then a decision is made as to whether to file criminal charges.

Groshong explained that he is unable to give further details on the investigation, because on the civil side it puts at risk the city’s ability to maximize recovery for the citizens of Seattle and on the criminal side they don’t want to “tip their hand” or otherwise jeopardize the investigation. Though it was strongly hinted that the Council members have received a more detailed briefing recently in executive session.

It was noted today that the city has a long-standing agreement with the homeowners association in the area where the tree cutting happened that allows for minimal pruning of trees and for clearing of invasive species – but nothing as drastic as what was done. According to Aguirre, “it looks like a clear cut area.” Here are some pictures: 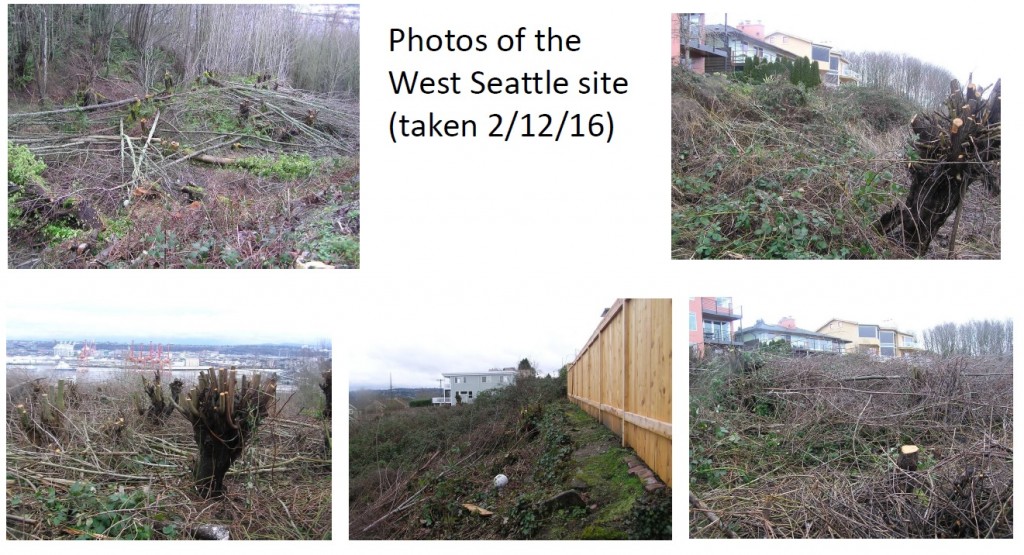 We want to be clear that the homeowners involved in the West Seattle incident did not have any agreement with the Parks Department to do any pruning or other work in the area. Superintended Aguirre was addressing a separate issue in Mount Baker where a homeowners association did have a permit to do work in that area. That agreement has since been put on hold as it may be in conflict with work being done by the Green Seattle Partnership. Superintended Aguirre was letting the public know what he has instructed staff to re-evaluate this agreement to ensure that the Parks Department does not have conflicting agreements with partners. Seattle Weekly did do a piece on that issue prior to the announcement to put the agreements on hold. (http://www.seattleweekly.com/news/963513-129/story.html) This issue was also brought up during public comment just before the start of the meeting started. Although this is separate from the West Seattle incident it is obviously related to tree stewardship more broadly.

What’s the state of planning for restoration of the affected land?

Council President Bruce Harrell was anxious to make sure that the ongoing investigation doesn’t impair the city’s ability to plan the restoration now – and he wants to see a plan soon.

The Parks Department and SDOT are already working on the plan. The area previously had deciduous trees (maples and alders), and the restoration plan will likely involve planting a mix of deciduous and conifers. In addition, the City Attorney’s Office has called in a geotechnical expert to assess the landslide risk, which is not imminent as the root systems for the cut trees are still intact and will continue to stabilize the hillside for a few months until they begin to die off.

The Council members were very interested in ensuring that the homeowners did not enjoy the benefit of improved views, setting up a situation where they can simply pay the fine as the cost of improving their views and property values. They asked whether it would be possible to bring in full-size trees rather than smaller, younger ones that will take years to grow. Reference was also made to Australia’s tactic of placing ugly billboards where illegal tree cutting occurs to punish the offenders by ruining their views. Council member Bagshaw noted that if full-size trees are brought in there will also need to be an irrigation system installed for them.

How can the city improve its operations so that it responds better next time?

Kubly listed several actions his staff are taking to identify “where we fell down” and how to improve processes for next time. He wants to see a “single point of entry” for residents to report tree issues, potholes, encroachments, and a number of other issues so that no one needs to hunt around for the right way to report an issue. He also wants to see the right kind of follow up, and as previously mentioned a response-time goal. In addition, SDOT is adding another tree crew via Move Seattle Levy funds, and they are creating a “tree asset database” for trees that they plant and inspect which will capture the value of the tree (including the environmental value for cleaning the air, carbon capture and hillside stabilization). And SDOT is writing a “tree capital plan” that will help them to determine how to value planting and pruning of trees in their care.

Council member Sally Bagshaw took it a step further, saying that she wants to see a “one city” approach to these issues where staff in one department know to look out for the interests of other departments and thus increase the overall number of eyes looking out for issues. Kubly said that he and SPU Director Ray Hoffman are already discussing that.

How can the city make residents who live adjacent to parks and greenbelts aware of their responsibilities?

Committee chair Juarez raised this issue in the meeting, hoping that the city can engage with both home owners and home associations adjacent to greenbelts and park properties to raise awareness of both residents’ responsibilities to respect those public lands and also how they can raise issues that they see.

No one had great answers on how to do this, but it was generally agreed that the many volunteer stewards who help to maintain the lands will be crucial to the process. 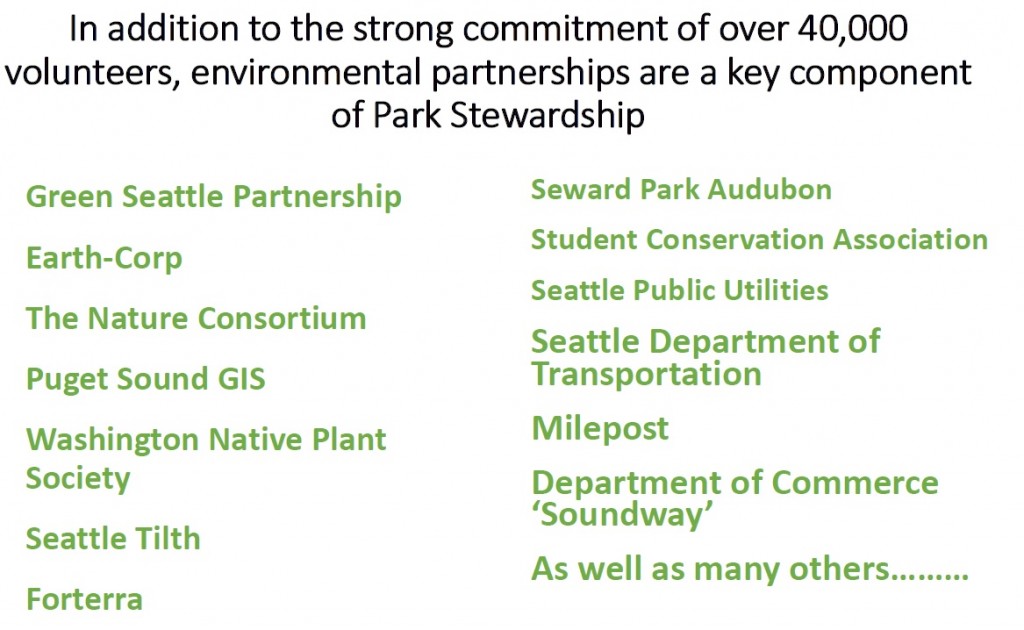 What are the next steps?

Juarez asked the presenters to come back with an update on the restoration plan and the investigation. Herbold is eager to look into the relevant legislation to ensure that the laws are sufficient in five areas:

Expect another status report in the coming weeks, and possibly some draft legislation from Herbold’s office as well.