The City Council’s ongoing debate over whether to vacate part of Occidental Avenue for the proposed SODO Arena will likely find a direction tomorrow. And the signs are pointing towards approval — with a lot of conditions.

This saga has gone on for several weeks, and I’ll spare you a recap of all of it. When we last heard about it two weeks ago in the Sustainability and Transportation Committee, SDOT was arguing in favor of a conditional approval, and the Port of Seattle was arguing against it. Their positions haven’t changed.

It’s committee chair Mike O’Brien’s job to get the bill to a resolution one way or another. The path he’s chosen is to author five amendments to the bill to add further constraints and conditions, and address at some level the Port’s objections.  That is a strong signal that he intends to vote “yes” assuming he can get his amendments through; five is a big investment of his time, one he wouldn’t make for a bill he intended to vote down. Council member Tim Burgess has proposed four amendments as well, signaling his intent; though it wasn’t really in doubt given his “good governance” approach in which honoring the spirit of the City’s MOU with Chris Hansen would be very important. Reports are that Council member Rob Johnson will also vote yes, while Council member Kshama Sawant has criticized use of public funds (or in this case, bonding capacity) to help the rich with their projects, so she would probably vote “no.” Council members Herbold, Gonzalez, and Juarez are unknowns.

Council member Bagshaw mentioned at this morning’s Council briefing that the Port of Seattle had approached her about an amendment requiring a supplemental Environmental Impact Statement to fold in the AECOM report on renovating Key Arena for NBA/NHL franchises, and she was leaning towards offering such an amendment. That suggests she, too, is trying to get to “yes.”  So overall it’s looking likely that the Council will find five “yes” votes.

The nine amendments being offered include:

At tomorrow afternoon’s committee meeting, SDOT will present once again, this time on the public benefits associated with the project. The city requires that vacation of public property can only be approved if the city gains public benefits that offset the public benefit lost by the vacation of the property. Of course, there is no mathematical formula that specifies how much public benefit is being lost, or being gained, so it’s a subjective, qualitative assessment. As one benchmark, the Council requested to see the list of public benefits the City received when vacating public right-of-way for Safeco Field, and SDOT dug up this list: 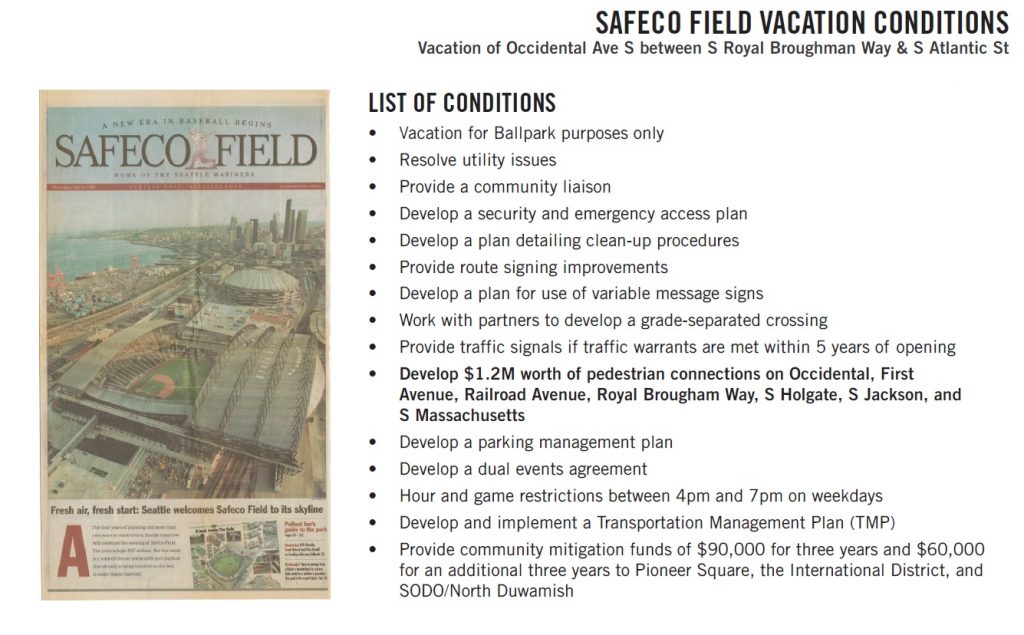 This list is sure to get a thorough review tomorrow.

SDOT’s presentation tomorrow digs deeper into many issues around the public benefits being provided by ArenaCo, including estimates of the costs for many of them. I won’t bore you with all the details, but here are the numbers for some of the bigger ones:

The Lander Street Overpass project is an interesting one. SDOT’s conditions for approving the street vacation include ArenaCo making a contribution towards the overpass project — and O’Brien’s amendments tighten that language further. The dollar amount won’t be decided until the arena and the overpass project are both fully scoped out. But the Lander Street overpass project, which has been on the books for almost a decade but never funded, has exploded back to life in the last two weeks, with SDOT discussing it publicly and submitting a FASTLANE application to the USDOT for funding (with a letter from the Mayor and City Council claiming that the city has prioritized the project). I’ve pointed out in the past that the train crossing at Lander Street is a much more significant impediment to the Port of Seattle’s vehicle traffic all day long than intermittent stadium traffic is (because this happens), so it wouldn’t surprise me if the sudden renewed interest in the Lander Street overpass is an attempt to get the Port of Seattle to back off their loud objections to the Arena. If the Port gets the overpass out of it, they’ve done well.

The street vacation for the Arena is still far from a done deal, but the wind seems to be blowing in that direction now. We’ll see what tomorrow afternoon brings. Expect an extended public comment session with many Sonics fans and many representatives from freight companies, followed by the SDOT presentation. The amendments themselves should go fairly quickly as they are all in the direction of tightening the thumb-screws on Chris Hansen. The only one that might be controversial is Bagshaw’s possible amendment to add a supplemental EIS for the AECOM report; some of the Council members might consider that a waste of time and money since Hansen has made it clear that he has no interest in Key Arena even if renovated, and neither the NBA nor the NHL have agreed that a renovated Key Arena is acceptable for their respective sports. But if someone is trying to count to five “yes” votes and feels that they need Bagshaw, it might go through.

What happens tomorrow, and after that, depends on who shows up to the committee meeting. The committee has three official members, but under Council rules all nine Council members may attend and vote at all committee meetings. Those who show up tomorrow will influence which amendments get adopted, and can vote on the final version to be recommended to the full Council for final adoption at their Monday afternoon meeting. Of course, when it comes before the full Council there is another opportunity for it to be amended, so what gets voted out of committee may still not be the bill’s final form. Also, if the vote in committee on the final amended bill is not unanimous, then a “divided report” is sent to the full Council and the Council must wait another week before considering it for adoption. In short: the fast path is unanimous approval in committee tomorrow and then a vote on adoption by the full Council next Monday; the slower path is a divided report tomorrow followed by consideration by the full Council on Monday, May 2.

Its been a long, contentious path to get to this point, and tomorrow night we will have a very good idea whether the street vacation will get approved by the Council — and whether the Arena (and the return of the Sonics) is one step closer to reality.