First there was Flint, Michigan’s horrific revelations of high levels of lead in the city’s water supply. Last week, Tacoma revealed that it had found high levels of lead in samples taken from older homes, and this morning it was reported that two Tacoma schools tested for lead in its water last year.  This has raised questions about whether the residents of Seattle should also be concerned about lead in their water. This morning, officials from Seattle Public Utilities briefed the City Council on the issue, and the good news is that almost no one in Seattle should be worried. But understanding how lead gets into the water, who is at risk, and what SPU does to ensure our water is high-quality, is a complicated affair worth taking a few minutes to understand.

First, thanks to SPU’s Director Ray Hoffman, Director of Drinker Water Quality Wiley Harper (whom Council President Harrell forever dubbed “Wiley the Water Guy”), and Corporate Policy & Incident Commander Sheila Straley for a very informative presentation this morning and for updating the information on SPU’s web site. Their depth of knowledge and fast work to re-test and reassure us on the quality of our water is commendable.

Our water comes from two sources: the Cedar River and Tolt River Watersheds. 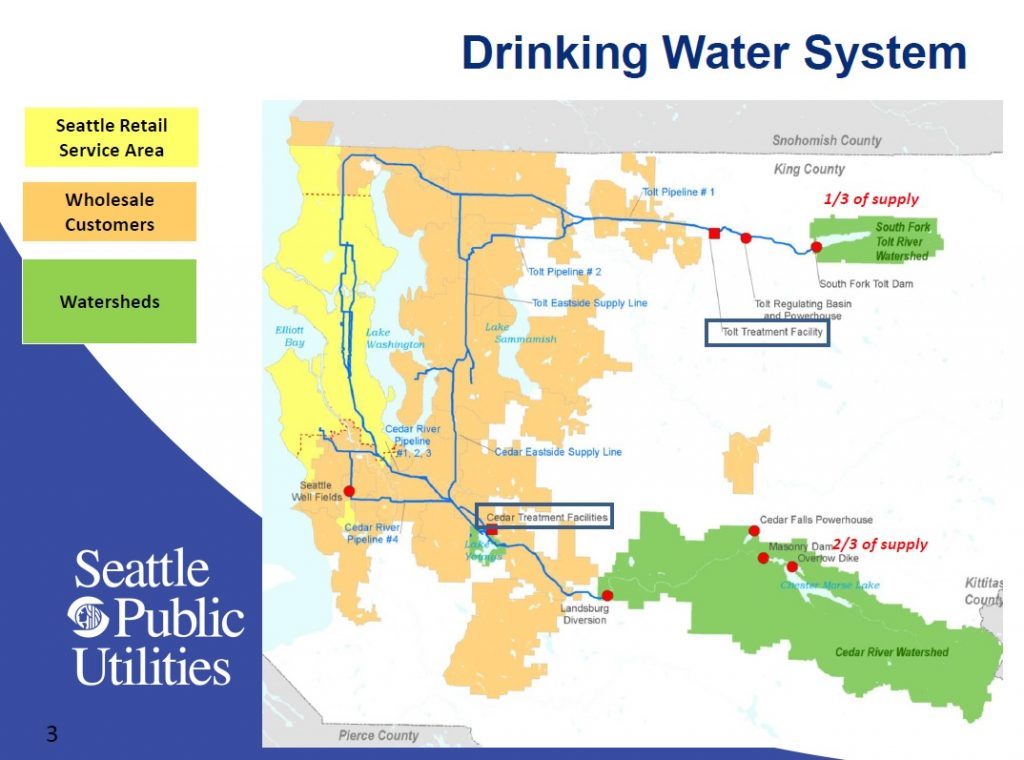 The water goes through a treatment plant close to the source, and is brought through large pipelines to Seattle where it is distributed across the city through a network of water mains. An individual building (residential, commercial, industrial, etc.) taps into the nearest water main, probably under the street it fronts, and then brings a much smaller pipe through a water meter and into the property.

SPU maintains the system, including the treatment, distribution and pipes, from the source through the water meter on the property; from there on it’s the property owner’s responsibility.

There are different issues in separate parts of this system, so let’s separate it out into three parts:

The overriding principle is this: over time, metal pipes corrode and can start leaching into the water that travels through them. All metal pipes will corrode, but the speed at which they will do so depends on several factors, including the type of metal, the acidity of the water, the temperature, and whether the water is stationary or moving. Corrosion and absorption happen faster if the water is more acidic, and/or warmer, and/or in stationary contact with the pipe.

Because of this, at the Cedar River and Tolt River treatment plants calcium oxide (aka “lime”) is added to the water. This makes it less acidic and more alkaline, and reduces corrosion of metal pipes throughout the system. It also leaves lime deposits inside the pipe which act as a protective layer.

It’s important to realize that parts of Seattle’s water distribution system, including the pipes in buildings, range in age from brand new to over 100 years old. Over that time, the best practices, codes and regulations for water pipes have changed several times.  The city does its best to keep records on what kinds of pipes are where through the entire system they are responsible for, i.e. the water mains and the service lines. The water mains themselves are not a source of concern; instead, let’s focus on the service lines.

It was common practice for many years on the East Coast to install lead service lines; it was far less common on the West Coast, and SPU never used them. Seattle’s 195,000 service lines are mostly copper, with a smaller percentage of plastic and galvanized iron or steel.

The copper pipes are generally fine, though some installations prior to 1980 may have used lead solder to join pipes. Seattle banned lead-based solder that year, and it was prohibited across the US in 1986 along with lead pipes. Records were not kept on when and where SPU used lead-based solder, but the risk of significant lead leaching from a small amount of lead solder on older installations is low. The bigger worry is houses with galvanized pipes: across the city there are 9,000 known galvanized service lines. Of those, 8,000 are pipes of 1″ diameter or smaller (suitable for a house, but not for other buildings that need larger water supplies). The concern is that some fraction of those, constructed before 1930, have a special fitting called a “gooseneck,” made of lead, that connects the service line to the water main. They were made of lead because it’s a softer, more flexible metal, and because the health hazards of lead were not known at the time. As the city does repair and maintenance work on service lines and water mains, they replace any lead gooseneck fittings they find; their data suggests that 1 in 4 galvanized metal service fittings have a lead gooseneck — so a total of 2,000 across the city. 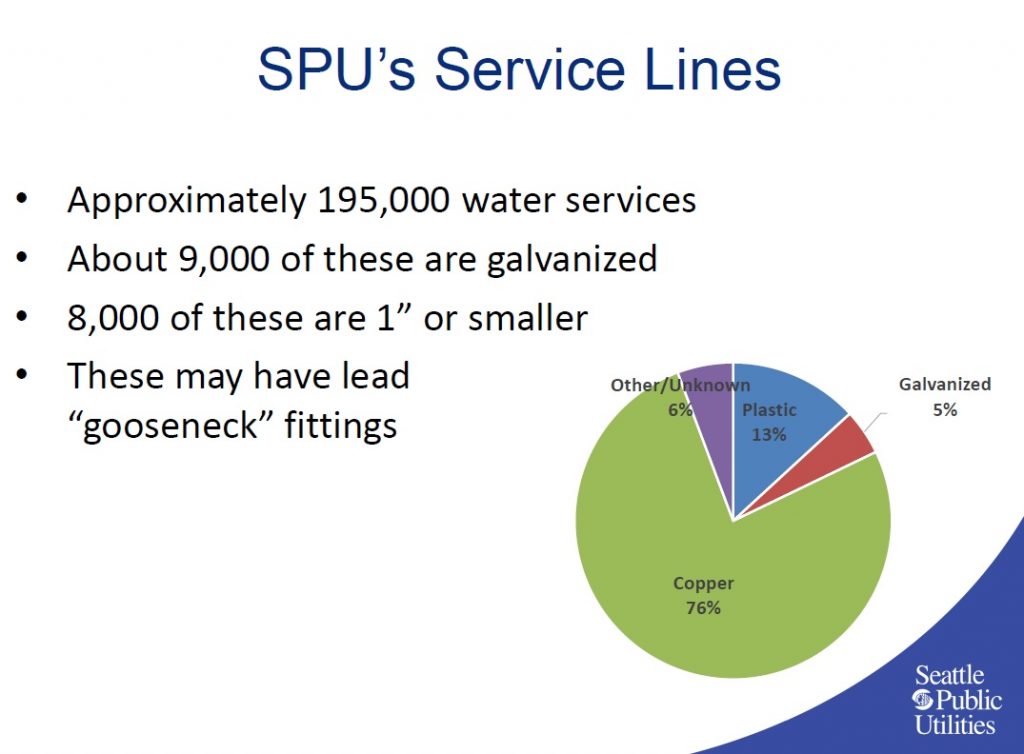 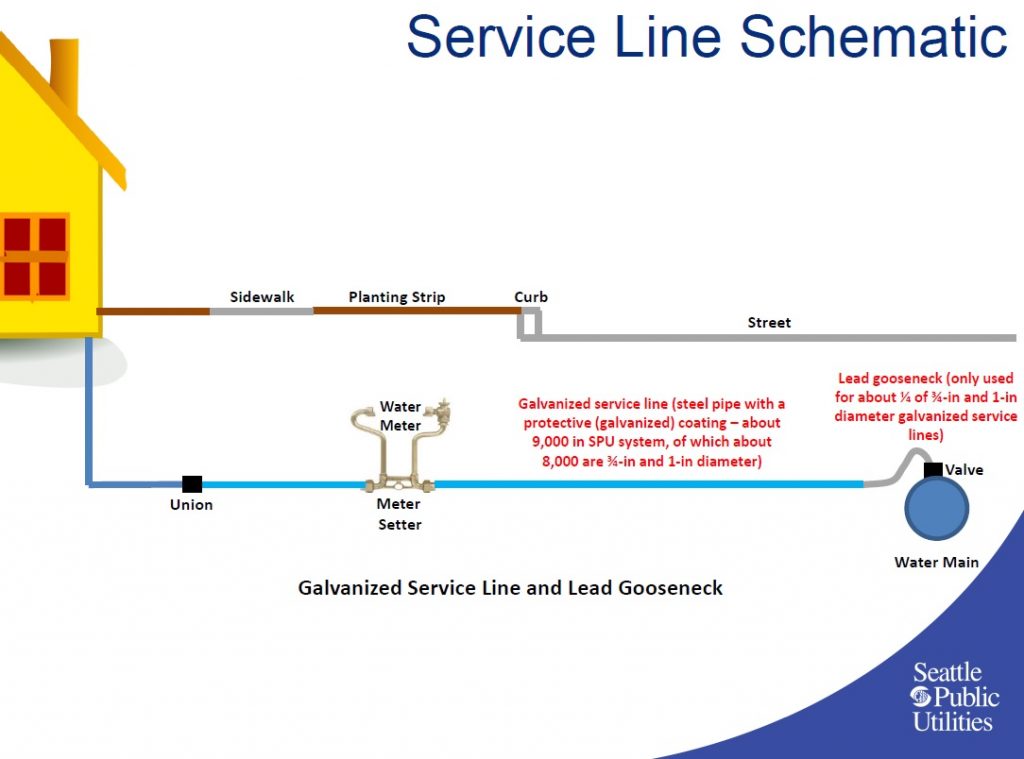 Here’s a picture of a gooseneck, from SPU’s presentation this morning: 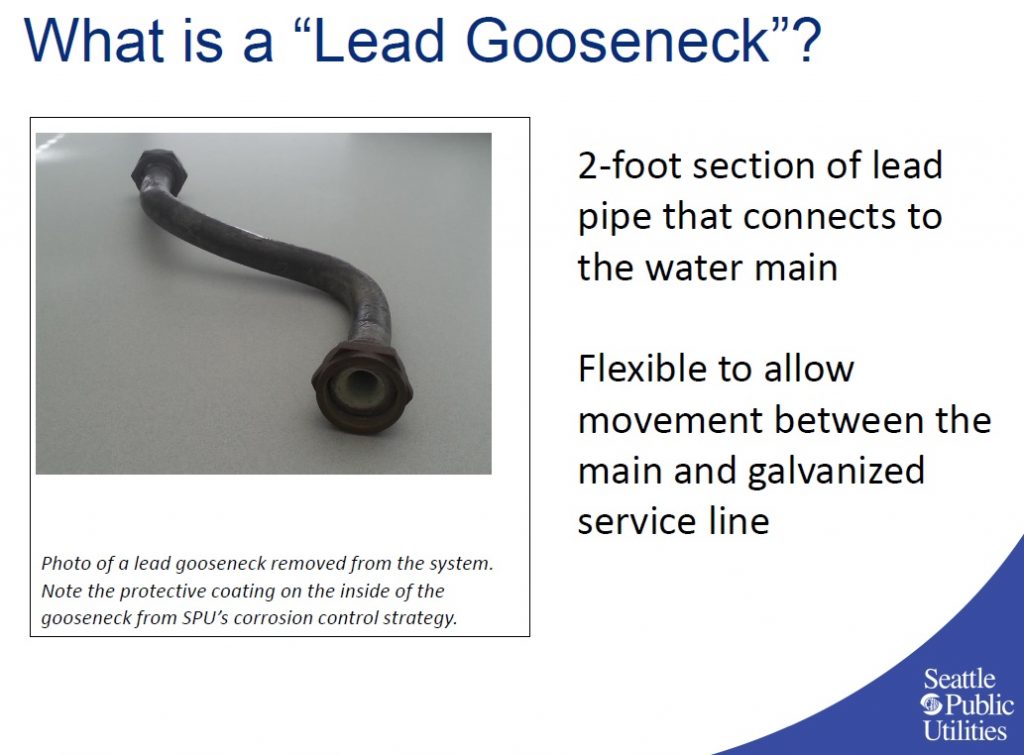 To recap: of the 195,000 service lines in the city, there are probably about 2000  with a 2-foot lead gooseneck fitting. The lead goosenecks are all in houses built before 1930 with a galvanized metal service line.

Here’s a map showing where the 8,000 galvanized metal service lines are. You can see they are, as expected, clustered in older neighborhoods: Ballard, Greenwood, Green Lake, Fremont, Wallingford, Ravenna, with concentrations in a few other scattered places. 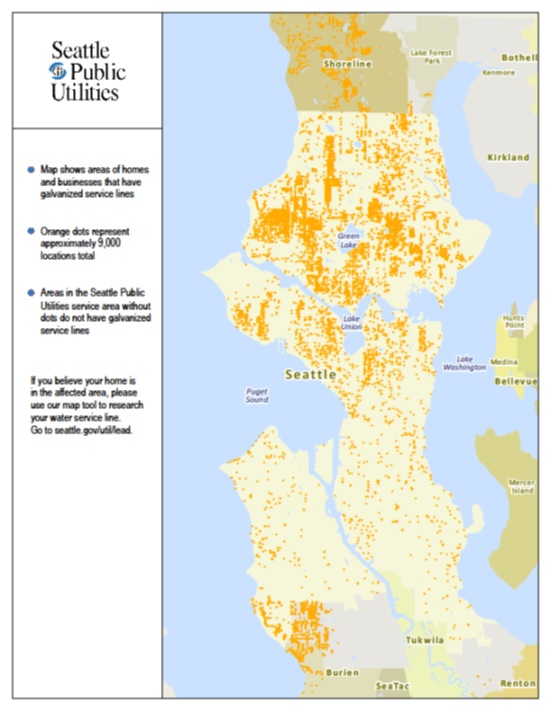 Guess what? SPU has built a tool for you to find out exactly what type of service line your house has. Go to this site, type in your address, and click on your service line. If you don’t see the word “galvanized” then you’re fine.  And MAJOR KUDOS to SPU for getting this tool built and posted quickly.

Now even if your house has a galvanized metal service line, you still have no reason to panic. First, only 25% of those houses have a lead gooseneck fitting. And even if yours does, because the city treats the water to reduce corrosion, there is a minimal amount of lead leaching into your water.

This is an excellent time for a quick explanation of what happened in Flint, Michigan. Flint has a large number of old houses with lead service lines. For the decades that Flint was buying their water from Detroit, everything was fine because Detroit also treated its water to reduce corrosion and leaching. But recently when the city switched over to sourcing their water from the Flint River, they stopped treating it for corrosion — and lo and behold, all of those old lead pipes started leaching lead into the water.

Back to Seattle. As long as the city continues to treat the water to prevent corrosion (and it will — Tolt and Cedar River water is naturally more corrosive) there is little to worry about from lead pipes or lead solder; the lime actually forms a deposit on the inside of the pipes to prevent corrosion and leaching. But it sure would be nice to have data confirming that the lead levels are fine. Good thing SPU’s got that covered too.

The last extensive test on Seattle’s water was in 2013. The federal government requires water be tested on a regular basis; cities like Seattle with an excellent record for water quality are required to do it less often, while other cities must do it annually.

The test regimen requires collecting water samples from 50 locations around the city. According to federal standards, it’s acceptable if 90% of those samples have 15 micrograms per liter or less of lead. In the city’s 2013 test, 90% of the samples had 3 mcg/L or less. In other words, it passed with flying colors.

But in case you’re not happy with 3-year-old test results, neither is SPU — especially with the news about Tacoma last week, since Seattle and Tacoma have similar water distribution infrastructure. So last week SPU went out and conducted a quick test of 5 locations, chosen from homes built before 1930 with galvanized service lines — the worst case and the center of the concern. They couldn’t verify that quickly (and without digging up streets and yards) whether those houses had lead gooseneck fittings, but it was a good first approximation. Of the five samples, the highest lead reading they received was 1.95 mcg/L. And further, as they let the water run longer, the lead levels dropped to 0. They are going back now to test more houses and to verify which of their test locations actually have lead gooseneck fittings. Also, this summer SPU will do the full 50-location test as required every three years.

Time for another recap: if your house was built before 1930 and has a galvanized service line, there’s a 25% chance that it has a lead gooseneck, but SPU is doing its job and there is no sign that lead is leaching into the water.

Now there’s a third part of this that we haven’t discussed at all: the pipes in your house. The City doesn’t keep records on whether lead pipes, or copper pipes with lead solder (a possibility for houses built before 1980) were used in residences, so you’re on your own here if your house was built before 1986. A plumber can verify for you whether the pipes in your house are lead; verifying lead solder is probably more difficult.

If you’re still worried (you really shouldn’t be), here are things you can do:

Here’s SPU’s web page with information on lead in the drinking water, and here is their presentation from this morning. Now stop worrying and get some sleep.