There’s no question that the “small but mighty” Office of Labor Standards needs to grow. The question is how to pay for it.

The Office of Labor Standards, or OLS, is a young city department; it was created only two years ago. It came into being because of the City Council’s recently-acquired preference for writing its own labor laws ( most municipalities rely on state and federal laws rather than write their own).

Seattle now has four major labor laws, all enacted in the past four years:

It also has two more chugging their way through the legislative process this year: secure scheduling, and paid family leave.

Business is booming: currently OLS has 135 open investigations and 70 pending inquiries which may turn into investigations. Plus, the City Council recently voted to give OLS authority to open its own “directed investigations” rather than just investigating on the basis of filed complaints. In short, these folks are swamped.  OLS Director Dylan Orr has called his department “small but mighty.” Both adjectives are warranted. Last year the entire office was a mere 7 people. They gained two more positions with the 2016 budget, and the Mayor has just asked the Council to approve two more “emergency” investigator positions, so soon they might be up to 11. but in the first three months of 2016, OLS completes 129 investigations and identified 30 violations that awarded more than $240,000 in remedies to workers. But they are falling behind; their goal is to investigate and resolve all complaints within 180 days, but as of March their average was 188 and growing. Their investigations are often complex and always fact-based, which requires more investigation. And more often than not their investigations are company-wide rather than focused on one employee.

The Mayor has committed to a dramatic increase in funding for OLS starting in 2017, increasing its budget from the current $2.2 million up to $5.8 million. This would grow their headcount from 11 to 22, and add an additional person to the City Attorney’s office to assist OLS fulltime. It also increases the funding for much-needed outreach and education both to employees and to employers. The Seattle business community has recently complained that the city is not doing nearly enough to educate employers on the city’s labor laws, though it’s happy to investigate and fine them for breaking those laws. In response, the Mayor’s proposal increases that line-item from $950,000 to $2.3 million in 2017.

None of that is terribly difficult or controversial. The hard part is finding $3.6 million in the city’s budget to pay for the growth.

Earlier this week, the Civil Rights, Utilities, Economic Development and Arts Committee was briefed by City Budget Director Ben Noble on the Mayor’s ideas for where to find the money. He has three:

What the Mayor didn’t propose, somewhat controversially, is to fund the increase out of the city’s General Subfund, the place where the current $2.2 million budget comes from. This raises a larger philosophical point about budgeting and funding programs: all the tradeoffs of funding something out of a big pot of money, or finding a dedicated source of money that has some connection to the intended use. Both have trade-offs: the General Subfund is fairly resilient to economic swings because its revenue sources are well diversified, but it’s spoken for so some other expense would need to be cut by the same amount. A dedicated funding source can sometimes make logical sense, such as taxing businesses for labor law enforcement based upon the number of employees they have; but it’s a new tax, and no one likes new taxes. You can also potentially mix the models, such as leaving in place the $2.2 million of existing General Subfund  dollars and then adding a smaller tax to cover the rest, but there’s no precedent for that in Seattle’s budget. For that matter, the general policy is that dedicated sources of funding for a particular program are discouraged — though there are a handful of exceptions.

The Council members present were clearly struggling with what the right model was. O’Brien and Herbold were leaning in favor of a dedicated source, justifying it as a fee rather than a tax. Noble thought that was an interesting idea, but cautioned them that a fee would need to be tied to the costs that are incurred, and there are legal questions about what costs are allowed to be recovered. Sawant was a bit more cautious; she acknowledged the precedents for dedicated funding sources, but thought that there was a political question being raised as well: is labor enforcement a service requiring a fee, or a policy that needs to be funded? Herbold asked whether any other cities have a dedicated funding source for labor law enforcement; Patricia Lee of the Council’s central staff could not identify any based upon her research.

Even if one bought into the notion of a dedicated funding source, each of the Mayor’s three options have their upsides and downsides. Given the size of Seattle’s work force, the annual employee hours tax would need to be $16.50 for each fulltime-employee in order to cover the $5.8 million OLS budget; that’s just over one hour of pay at Seattle’s soon-to-be $15 minimum wage.

On the business license fee: currently there is a two-tier structure: $55 for a business with annual gross revenues under $20,000, and $110 for the rest. To generate $5.8 million in additional revenues, the fees would need to be $95 and $190 respectively — a 73% increase. A union has put forth the idea of wrapping the employee-hour tax above into the business license fee; the downside to that is today the paperwork for business licenses are simple because the fees are fixed, not calculated; if it’s based on employee-hours it will be different for every company, which will increase the complexity and predictability of business license fees, as well as the staff workload for verifying them. Further, it’s not entirely clear whether it can be used for raising revenues vs. cost-recovery.

The B&O tax has a state-mandated cap on its rate, and the City of Seattle is already very close to its maximum. To raise $5.8 million would require raising it be 2.1%, which might put it over the cap and require voter approval.  The law is somewhat vague on exactly how the cap is calculated, though.

But the strange thing about the proposal to fund OLS is that last week Noble presented to the Budget Committee a revenue forecast for 2017 and beyond, in which he included proposals from the Mayor to both restructure the business license tax into several tiers, and also increase the B&O tax. Both would increase revenues, and part of those additional revenues would be used to fund OLS.. 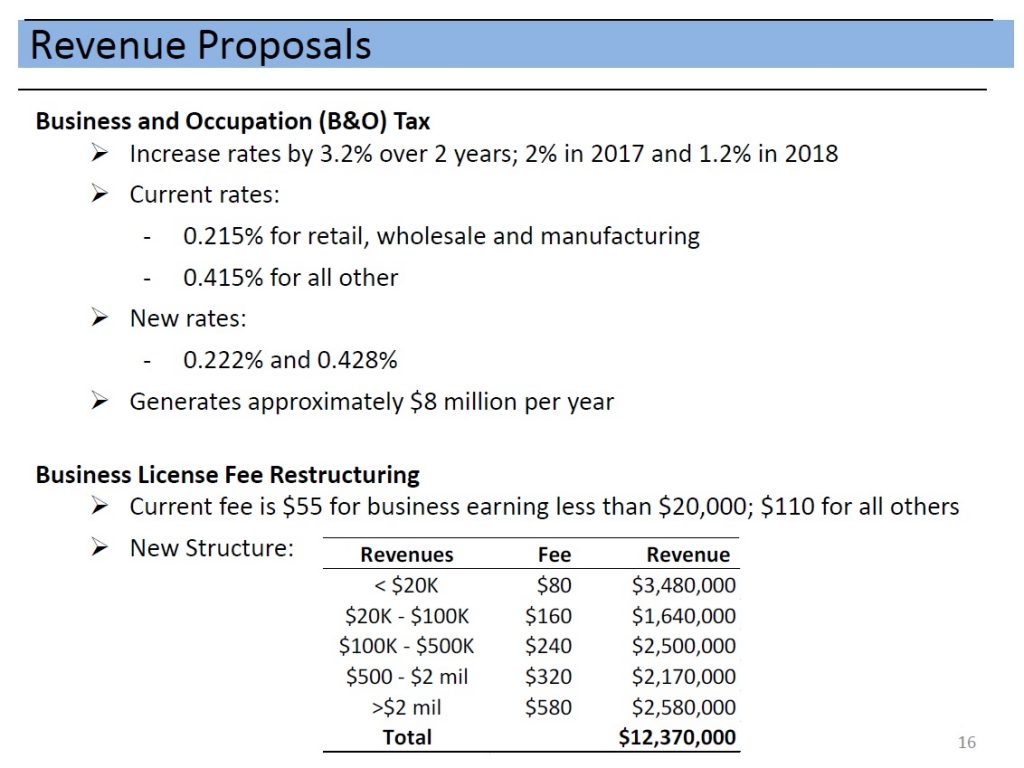 It’s not clear at all why the Mayor floated a separate proposal about funding OLS, when he is building it into his baseline 2017-2018 budget and proposing different models for the same potential revenue sources.

The Council members peppered Noble and their own staff with questions, for which they promised to do research and bring back answers. They will also follow up in executive session with the City Attorney on the legal questions raised (meaning it will be a private, attorney-client privileged conversation to get legal advice). Herbold committed to working with the staff and her colleagues on a specific proposal for funding.

One way or another, OLS will get funded next year. We may even see its budget go higher than $5.8 million if secure scheduling legislation is enacted this year. We’ll probably have a better idea come July, when the 2017-2018 budget development process begins in earnest, which revenue sources they intend to tap.