School was in session this afternoon at the Energy and Environment Committee, where Seattle City Light’s sources for electricity came up repeatedly. The first lesson was in the monthly report of Seattle City Light (SCL) CEO Larry Weis. Weis reported that the recent warm weather has led to greater snowmelt in the mountains, which in turn has led to an oversupply of hydroelectric power in western markets. That has depressed wholesale power prices — which would be a good thing if SCL were a net buyer, but it actually sells excess power generation from its hydro plants into the wholesale markets. That means that the utility is not meeting its revenue goals.

SCL has a mechanism for managing this: a “rate stabilization” account to smooth seasonal and weather-related fluctuations in revenues due to the power market. Excess revenues are added into the account, and when revenues drop money is withdrawn to balance the budget. But if the fund balance drops below $90 million, a 1.5% surcharge is automatically added to electric bills until the balance is back above $100 million. As of the end of April, the balance was $96 million, and Weis warned that the surcharge could be activated in the fall. The rate stabilization fund was established a long time ago, when the population of Seattle was smaller and SCL’s exposure to market fluctuations was much higher; the question was raised this afternoon as to whether the fund still needs to be that large. Weis and the Council staff plan to review that further.

But the agenda item that got top billing this afternoon was a resolution stating the Council’s opposition to nuclear power, in a discussion that in many ways was a replay of one from two years ago. Committee chair Kshama Sawant once again opened up her meeting to give environmental groups an unopposed opportunity to argue for the closing of the only nuclear power plant in Washington State, the Columbia Generating Station (CGS).

CGS has a colorful history, as the last remnant of the ill-fated WPPSS public utility that would attempt to build five nuclear power plants, but went bankrupt in one of the largest public bond defaults in the nation’s history. WPPSS was renamed Energy Northwest and continues to own and operate CGS.

Energy Northwest has not given up on its vision of more nuclear power in the region, but SCL has told them that it is not interested in investing in nuclear plants. The resolution under consideration today throws the Council’s backing behind that view in opposition to new nuclear power. Mayor Ed Murray also supports that view and has agreed to sign the resolution.

But the Mayor is not on board with shutting down CGS, and so today’s resolution is a compromise that stripped out the call for closing CGS from the original version. Sawant thanked Weis for his shuttle diplomacy to hammer out the compromise.

Nevertheless, today’s presentation was mostly another lengthy argument for closing CGS, as told by Charles K. Johnson of Oregon-Washington Physicians for Social Responsibility, and Jerry Pollet and Peggy Maze Johnson of Heart of America Northwest. (aside: Pollet is also a well-known state representative; Heart of America is his job when the state legislature is not in session)

About 4.5% of Seattle City Light’s power comes from the Columbia Generating Station, through the Bonneville Power Administration (BPA) which runs the wholesale electricity market in Washington and is under contract to purchase 100% of CGS’s 1170 megawatt production.  But BPA also manages much of the “green” production in the state, including wind and especially hydro power. 90% of SCL’s power is from green sources, and the utility is BPA’s second-largest customer. That gives SCL some serious political capital if the city wanted to push for the closing of CGS.

Poor design. The Mark II reactor has a design similar to the ill-fated Fukushima reactor in Japan. And we all know what happened there.

Earthquake danger. When CGS was built 45 years ago, far less was known about the extent of earthquake dangers in the Pacific Northwest, including on both sides of the Cascades. Recently the Nuclear Regulatory Commission has asked for CGS to re-assess the earthquake hazard risk and exposure for facilities on the Hanford nuclear reservation where CGS is sited. The first part of that work is done: assessing the earthquake magnitude and frequency. The second part is due next spring: assessing the facilities’ ability to withstand the range of earth movement likely to occur. But that hasn’t stopped today’s presenters from already drawing their own conclusions about the safety risk; they claim that CGS could see an earthquake twice the magnitude of what it was designed to withstand. And because the plant is on the Hanford reservation, surrounded by huge amounts of stored nuclear material (some in leaking tanks), the risk is multiplied: damage to any of the facilities there creates additional problems and hazards for the others.

Energy Northwest debates those claims, and they have a point: the activists are dramatically oversimplifying the way earthquake hazards are evaluated. Hanford has a number of nearby faults, and could also be affected by major earthquakes as far away as the Cascadia Subduction Zone off the Washington coast. Here’s a map of just the nearby ones (red lines are faults): 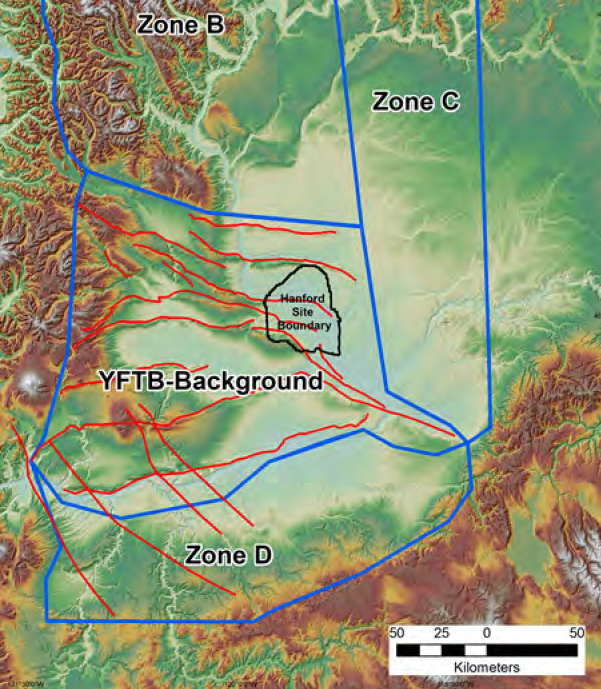 Each one of these has a separate profile: how frequently it has events, magnitude and length of the events, direction of earth movement, and frequency of the shaking. Each of these factors is important, as well as the distance from CGS, because they each determine how much damage a quake could do. Building foundations and structures are designed to withstand particular kinds of motion; they also have resonant frequencies that make them particularly susceptible to particular frequencies of shaking. The structural analysis needs to profile each of the faults and the kind of earth movement it would cause at the CGS site, then model what that would do to the CGS buildings. It’s entirely possible that a moderate quake at a low frequency could do far more damage than a high-magnitude quake at a different frequency. Or one that moved earth north-south could cause huge problems while one that moved vertically would do little damage. Or a moderate quake that lasted two minutes would be worse than a large one for fifteen seconds. Modeling earthquakes and earthquake resistance is very, very complicated.  We will need to wait for the full analysis next year to understand the real risk.

CGS generates radioactive waste. That residual material is dangerous for hundreds, if not thousands, of years. Hanford is already the largest storage facility for nuclear waste in the western hemisphere, and it’s not doing a particularly good job of it. Underground storage tanks have been leaking radioactive, toxic and carcinogenic materials into the ground, and it is slowly seeping towards the nearby Columbia River.

CGS is expensive to operate.  They argue that CGS’s power is more expensive than the market rate, and is costing ratepayers $100 million annually beyond market costs. Energy Northwest debates those figures.

CGS’s electricity can be replaced economically with carbon-free alternatives.  This is undoubtedly true, especially with the rapidly-dropping price of solar power.  It is important to note, however, that it’s critical to have a diverse set of power sources in order to reliably deliver 24x7x365 for years. Renewable sources each have their strengths and their liabilities: solar doesn’t work at night and requires large areas; hydro is subject to seasonal rain/snow fall, not to mention climate change, and usually involves damming rivers which can cause problems for fish runs; wind power is subject to weather, and causes problems for birds. One absolutely can build a diverse portfolio with 100% renewable sources, but it takes work and it’s not issue-free. The current issues SCL is having with trying to sell its wholesale hydro power just points to how messy the renewable power business can be.

Even if you don’t agree with the activists’ arguments, it’s certainly true that nuclear power has no future in this state with the embarrassment of riches in renewable power here and south of us. And CGS is 45 years old, outdated, and reaching the end of its usefulness. It wouldn’t be surprising if SCL stopped buying nuclear power altogether in the next 12-24 months, and BPA announced shortly after that a target date for shutting it down. Of course, the seismic study due next June might end up accelerating that schedule further.