Five weeks after Mayor Murray and Council member Kshama Sawant unveiled draft legislation to prevent slumlords from raising rents, the bill finally made its appearance in the Affordable Housing, Neighborhoods and Finance Committee this morning, and after some fairly superficial amendments it was passed out of committee.

The ordinance was very carefully designed, and with good reason: with a statewide ban on rent control in place, this measure needs to differentiate itself from what would be considered rent control enough to avoid being thrown out in court.  So in practice the ordinance would simply delay a rent increase until the property passes a city inspection. How that process works is complicated enough to require a flowchart: 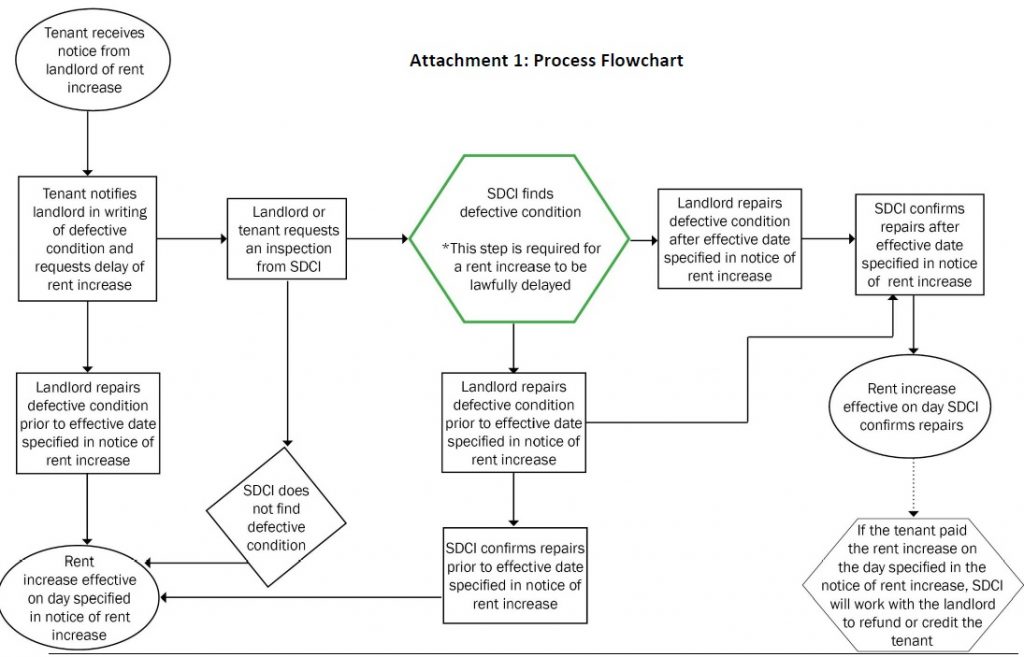 Landlords are already required to provide tenants with written notice of a rent increase, either 30 or 60 days before its effective date. Under the new ordinance, if a tenant’s property does not meet city code then the tenant has a period of time to file a complaint with the Department of Construction and Inspections (SDCI). SDCI sends out an inspector and if the code violations are verified, notifies the landlord that the property must be brought up to code before the rent increase can go into effect. Once the landlord completes repairs, SDCI re-inspects, certifies the property as meeting code, and the rent increase goes into effect on that date or the original effective date, whichever is later.

The simplest case is when all that happens before the effective date of the rent increase, but things can get more complicated. If the first inspection (verifying the violations) doesn’t happen until after the effective date, then the tenant still must pay the new rent; if subsequently the SDCI inspector verifies the violations, the rent rolls back to the original rate until repairs are made and verified, and the landlord must refund the additional rent collected above the original rate. This is important context for the one amendment proposed today, in two different forms, to deal with these overlapping deadlines.

The ordinance in its original form was intended to incent landlords to fix repairs quickly. To that end, tenants had a ten-day period after notification of a rent increase to file a complaint with SDCI that would delay the increase. Council member Sawant and housing advocates argued that this was insufficient time, given that tenants need to learn about their rights, assess the situation and file a complaint — all while dealing with everything else in their normal lives. This led to two competing amendments: one by Council member Burgess that would extend the ten-day limit to 15 days for a 30-day notice and 30 days for a 60-day notice, and one by Sawant that would extend it to the effective date of the rent increase. It was an interesting debate with good points on both sides: Burgess argued that his version would likely get code violations fixed faster (usually before the effective date of the violation), and that Sawant’s would likely lead to more delayed effective dates, more refunds, and generally more process and paperwork. He also pointed out that tenants can request an SDCI inspection any time and if code violations are found then the department’s enforcement powers come into play to get code violations fixed quickly (and fines assessed if appropriate). Sawant didn’t disagree with any of those points, but argued that the balance of power already favored the landlord and tenants should not be given further time pressure — in fact, they should be given as much time as possible.  In the end, Sawant won out; her amendment was adopted by a 4-1 vote, with Council members O’Brien, Herbold and Johnson joining her and Burgess the sole dissenter.

A handful of other amendments were also adopted:

You can find all the details on the amendments here.

The final, amended version of the ordinance was approved unanimously, and heads to the full council for final approval next Monday afternoon.

SDCI has a nice web site loaded with information for tenants. It includes this document explaining tenants’ rights (and available in several languages) and this list of potential code violations.