Yesterday the Seattle Design Commission delivered its annual review for 2015 to the City Council, and as part of that presentation discussed their project to look deeply into issues around “privately owned public spaces” or POPS.

Every year the Commission, which is chartered to “advise the Mayor and City Council on projects affecting the public realm,” looks at one issue in-depth. Last year they looked at the increasing number of requests for street and alley vacations and how they are affecting the city’s transportation grid. This year they took on POPS, a closely related issue.

When a development project makes a request for the city to vacate an alley or a portion of a public street (in effect selling it to the developer), or when it asks for easing of zoning restrictions, there is an expectation that the citizens of Seattle will receive public benefits in return sufficient to make the project “in the public interest.” More often than not those public benefits have taken the form of some area of the development being declared “public space.” Legally the space remains private property, but it is encumbered with rules that force the owner to allow the public at large to have reasonable access and use of the space — thus the term “privately owned public space.” POPS is usually extra-wide sidewalks, courtyards with outdoor cafe-style seating, and landscaping to bring some additional greenery into urban settings.

In practice, however, the POPS usually are designed as extensions to the development projects and serve their tenants far better than the public at large. They are designed to look like they are part of the buildings, which sends a signal that they are private, not public — if it looks more like the building than the surrounding neighborhood, everyone assumes it’s part of the building. Their adjacency to building lobbies and street-level retail space also communicate their intended use. Worse, many property owners instruct their security personnel to enforce the building’s rules and regulations within the public space, including restricting free speech and other activities that the owner or tenant might disagree with. Owners and tenants also often commandeer the public space for private events for their own employees.

Earlier this year, the “Amazon alley” street vacation proposal stirred up these issues, as Amazon had developed a reputation for ejecting people from the public spaces on their property. The Council ended up approving Amazon’s request, but voiced a desire to revisit the city’s guidelines for POPS. Since then, nothing has happened on that issue.

The Seattle Design Commission’s investigation into the issue led them to compile an insightful list of observations on how POPS have been abused, or at least have not lived up to their potential public good: 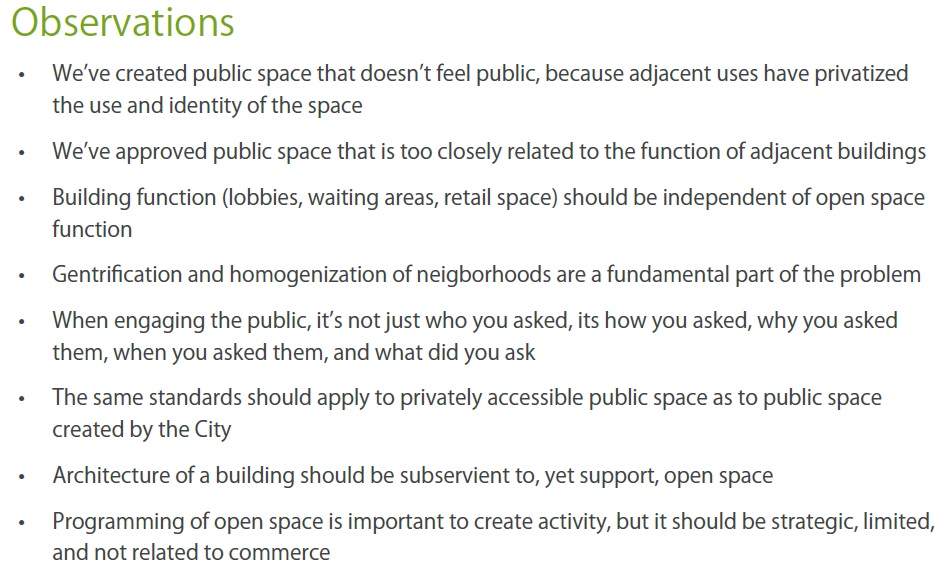 The list, and the subsequent discussion, brought out some important insights. A key one is that POPS should meet the same standards as publicly owned spaces such as those managed by the Parks Department; they should stand alone as valuable, usable spaces independent of the design and use of the adjacent building. Another insight: it’s not enough simply to design a nice space and declare it open to the public; you need to attract people to the space and give them reasons to want to stay there.

This resonated very strongly with the Council members, and they encouraged the Seattle Design Commission to move forward with their next steps to gather data on existing POPS, use that information to revise their own guidelines, and apply those standards to projects in advance of formal reviews to drive more equitable outcomes. 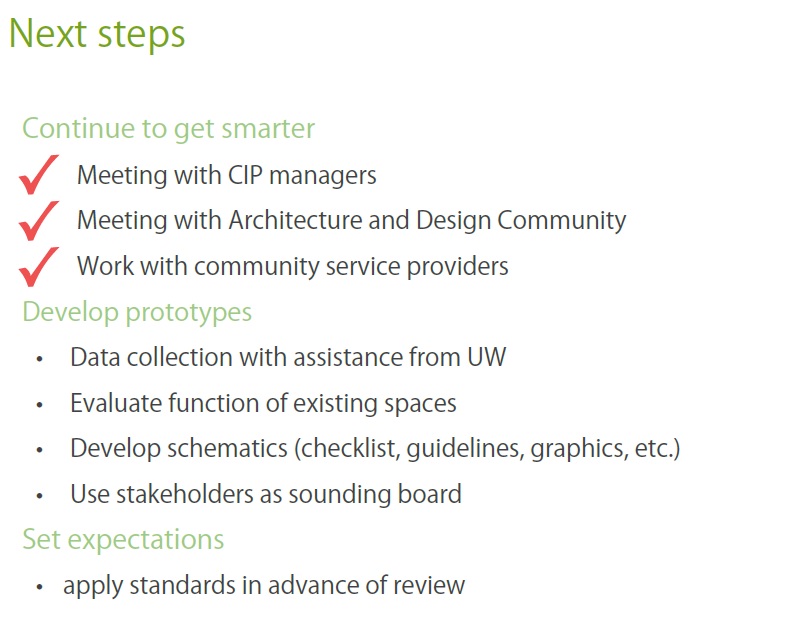 SDC also noted that they are experimenting with a more assertive approach on a project currently under review, in which they asked a developer to submit an operation and management plan for the POPS as part of the formal review process so that they rules around access and free speech can be reviewed, approved and codified well in advance (probably years) of the space opening to the public.

SDC’s hard look at POPS and efforts to more aggressively the “public benefit” aspect is all good news. Hopefully it will serve as an example for the Council to follow in updating its own guidelines, however, rather than an excuse for them to ignore the problem in the hope that the SDC will take care of it for them.