Last Tuesday the Council’s Sustainability and Transportation Committee heard a presentation on the 2035 Comprehensive Plan’s Transportation section, in one of a series of presentations to various Council committees on the different sections that make up the Plan.

As a reminder, the review schedule for the Comprehensive Plan looks like this: 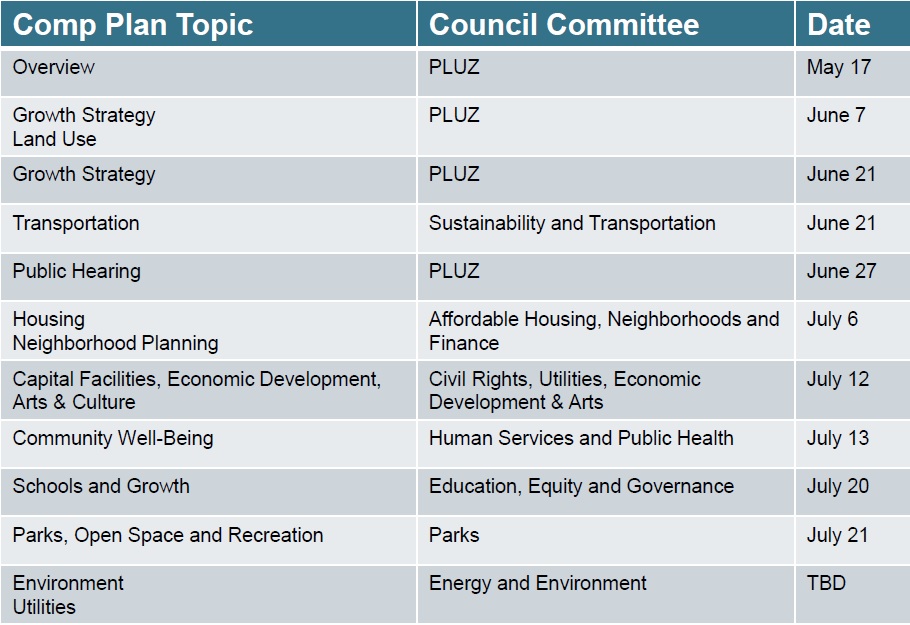 Also: tonight at 6:00pm, there will be a public hearing in Council Chamber on the Comprehensive Plan, so if you have thoughts, that will be one of your opportunities to voice them.

In the presentation, the three main goals of the transportation section (or “element”) were laid out:

Rather than walk in detail through the entire section, the presentation focused on four big issues that the city staff wrestled with in updating the plan:

They proposed that streets have three “zones” of right of way: pedestrian space, vehicle travelway (including bike lanes), and a “flex zone” that could be used for a variety of things — and that most of the discussion and debate revolves around how to allocate flex space.

They think about this as a conversation about the six essential functions of right-of-way:

There is a complicated mapping between the three kinds of right-of-way and their potential functions, with flex space being used for most of them. That complicates the conversation about how to allocate flex space, as we try to balance competing needs. 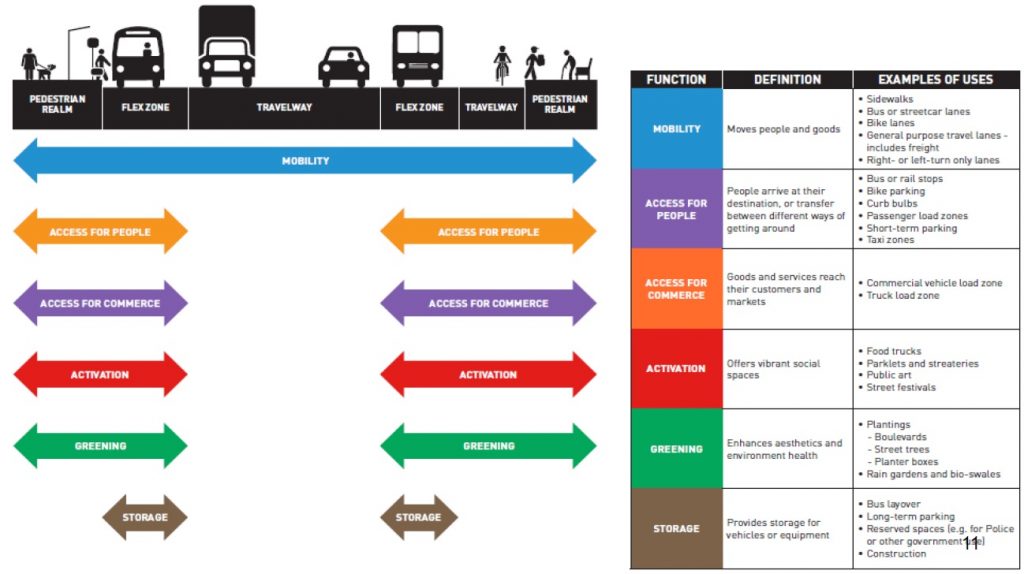 The key to making good decisions about how to allocate that right-of-way space is to answer the fundamental question: what are the different functions that a particular right-of-way needs to do? And you don’t answer that question on a city-side basis; you answer it by focusing in on the neighborhood, the zoning classification, all the way down to the block and lot.  Right of way in a single-family residential neighborhood needs to do very different things than in a neighborhood commercial area, an industrial area, or a downtown commercial area. Even within commercial areas, shopping centers need very different right-of-way than office buildings or entertainment districts. All that comes into play. The city staff also pointed out that right-of-way can be used different ways at different times of day, such as arterials that move a lot of cars during peak weekday commute hours but have plenty of capacity for parking the rest of the day. They are committed to using all of these factors in determining how to allocate right-of-way, and especially flex-time on the city’s roads.

The second big issue, level of service (LOS), is equally tricky but they are proposing a fairly significant change to align with updated priorities in the Comprehensive Plan. Since 1994, the Plan has used a metric for LOS called the “volume to capacity ratio” — what is the volume of traffic along a street compared to its theoretical maximum capacity.  The problem with this model is that it is very vehicle-on-roads centric, when in fact the goal of the transportation plan should be to enable the six functions outlined earlier (none of which are “move cars.” In the end, we care about moving people and moving goods, not really about the cars, trucks and buses that move them. The old metric also doesn’t look at our multi-modal transportation system holistically.

The new metric being proposed is “single-occupancy vehicles as a percentage of all the person-trips that people take in the city,” or “mode share.” It allows for analysis of how moving people from one mode of transportation to another can change the efficiency of our roads, like this:

This is important because at this point, Seattle is built out, and there is no room to add more roads (except underground at enormous expense); the main way we will move more people and goods is by finding more efficient ways to use the roads we already have.

The old LOS overlays a map of Seattle with “screenlines” in various places and count (or forecast) traffic the crosses them as a way to identify the most important traffic flows in the city. 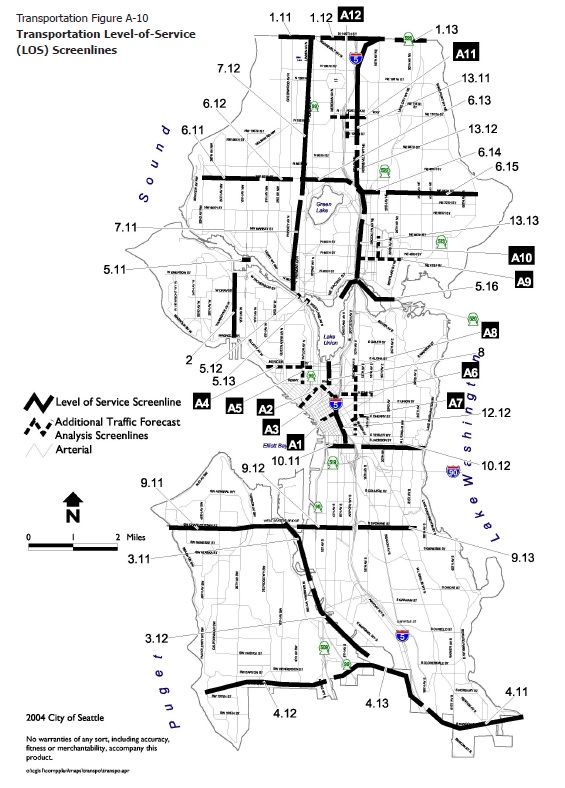 But in the new LOS system the city is divided up into zones, with goals for the maximum percentage of traffic that is single-occupancy vehicles during peak afternoon hours (3pm to 6pm) — since that is the time when Seattle overall is most congested. 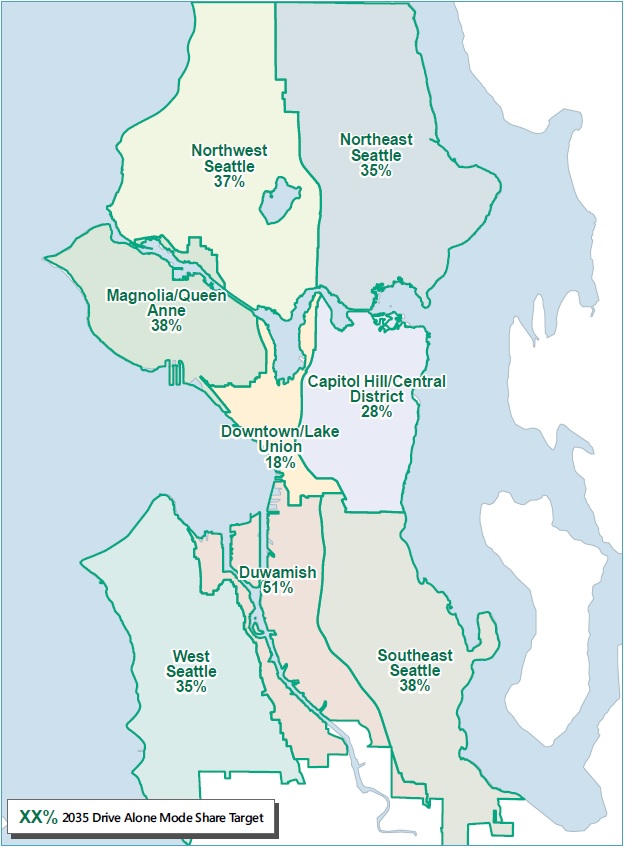 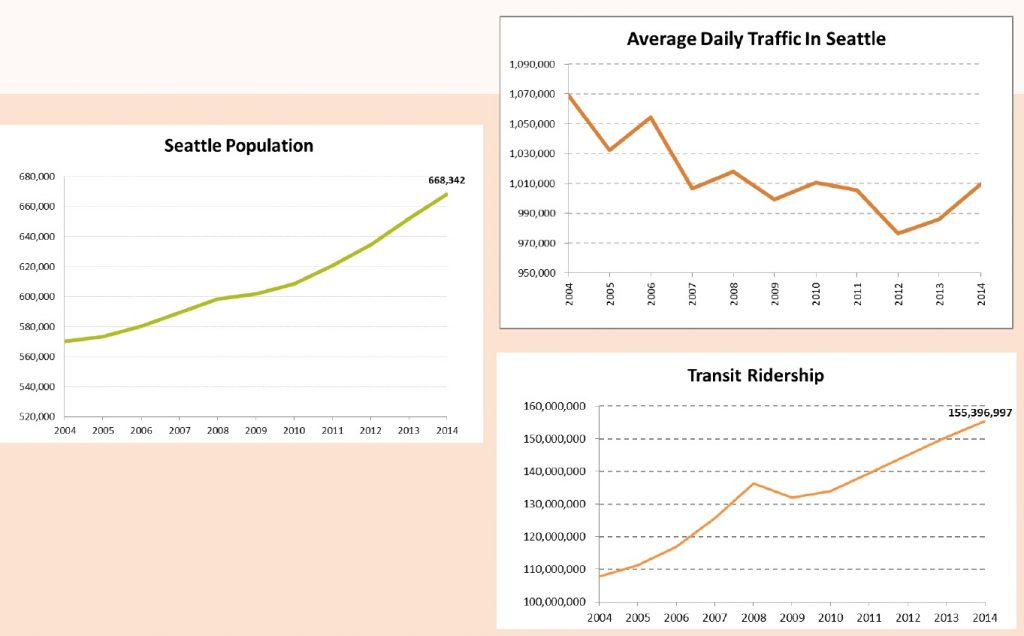 In the context of this focusing squarely on reducing (or keeping constant) the number of single-occupancy vehicles is a good thing. It’s probably over-simplifying to focus on only one metric, though.

The third big issue is safety; the last version of the Comprehensive Plan said little about it, but with Seattle’s new “Vision Zero” initiative to end traffic deaths and serious injuries by 2030, it needed to be incorporated and the two plans aligned.

The fourth issue involves aligning and coordinating the separate plans for different modes: freight, bicycles, walking, buses, street cars, light rail, and cars — with particular focus on the ones that need to share streets.

Council member Mike O’Brien, chair of the Sustainability and Transportation Committee, raised a couple of considerations in giving his feedback. First, he asked how the city thinks about transit investments when we ask developers to pay for traffic mitigation for their construction projects such as a new office building or condo high-rise. The city has indeed been thinking about that and would like to have a menu of options to present to developers that will influence the mode-share LOS metric, such as reducing the amount of parking they provide, giving out bus passes to its residents or employees, or even providing bike lockers and showers. They are open to the idea of investing in capital projects as well.

O’Brien also critiqued the way the current draft of the Comprehensive Plan addresses community engagement. The old Plan talked about it in every section; the new plan consolidates it into one “Community Engagement” section that is intended to apply to the entire document, but unfortunately gives many the impression that community engagement has been de-prioritized. O’Brien suggested that more explicit references to the community engagement plan should be added to every section so people know where to look to find it — and don’t simply think it was taken out.

Council member Rob Johnson, whose Planning, Land Use and Utilities Committee is spearheading the review of the Comprehensive Plan, raised some other topics that need further discussion:

O’Brien closed out the discussion by noting that there is still more work to on the transportation section do before it’s ready to be approved, but it’s a thoughtful start at wrestling with some difficult issues.