This morning the Council took up a potential increase in rates for solid waste disposal services in Seattle. The reason for it is fairly simple, but the execution is fairly convoluted.  Seriously, you’ll want to understand this, but it’s going to make your head hurt.

As a publicly-owned utility, Seattle Public Utilities’ budget is designed to break even: rates are set so that revenues cover expenses. 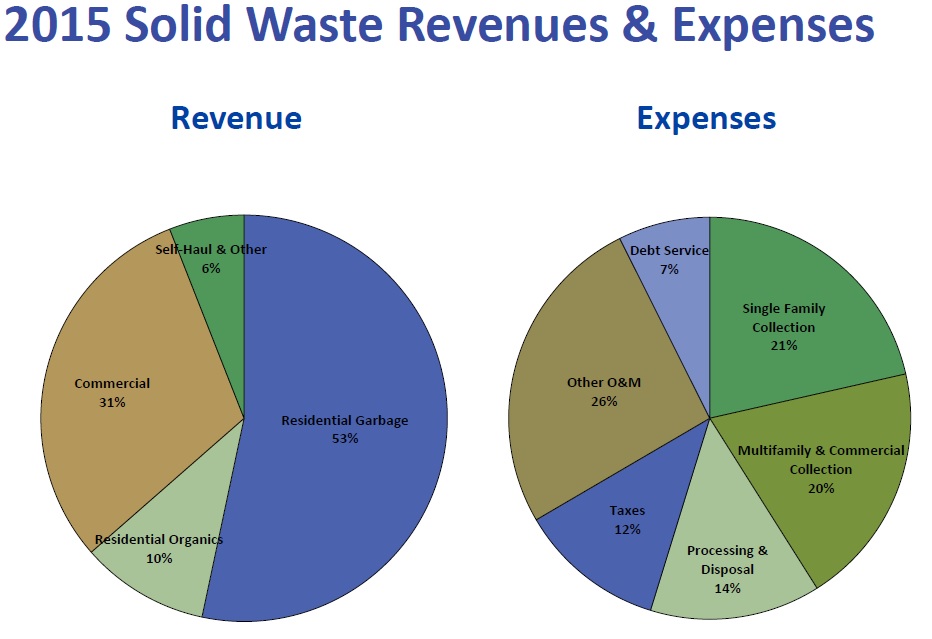 But there’s a trick in here that makes SPU a profit center for the city: the utility pays a tax imposed on all companies in the city that do solid waste collection and disposal. There are a handful of other small companies that provide haul-away service for construction sites and the like, but the vast majority of the solid waste tax revenues are paid by SPU — and as you can see in the pie chart on the right, it represents 12% of its expenses.   Two important points:

The city’s budget is in a bit of a bind: revenues are going up, but not as fast as expenses. The City Budget Office’s projections show it mildly in the red over the next few years, and it’s desperately looking for new sources of revenues to pay for expanding the police force, response to the homelessness crisis, affordable housing programs, and more. Yesterday the Council approved the Mayor’s proposal to increase the B&O tax and business license fee, and earlier this month it agreed to sell the Pacific Place Garage. It approved putting the Housing Levy on the ballot, and it is working its way through to approving the Mandatory Housing Affordability program to raise money for affordable housing.

In that spirit, the Mayor is proposing to raise the solid waste utility tax to raise additional revenues for the city from the current 11.5% to 14.2%, effective in April of next year. 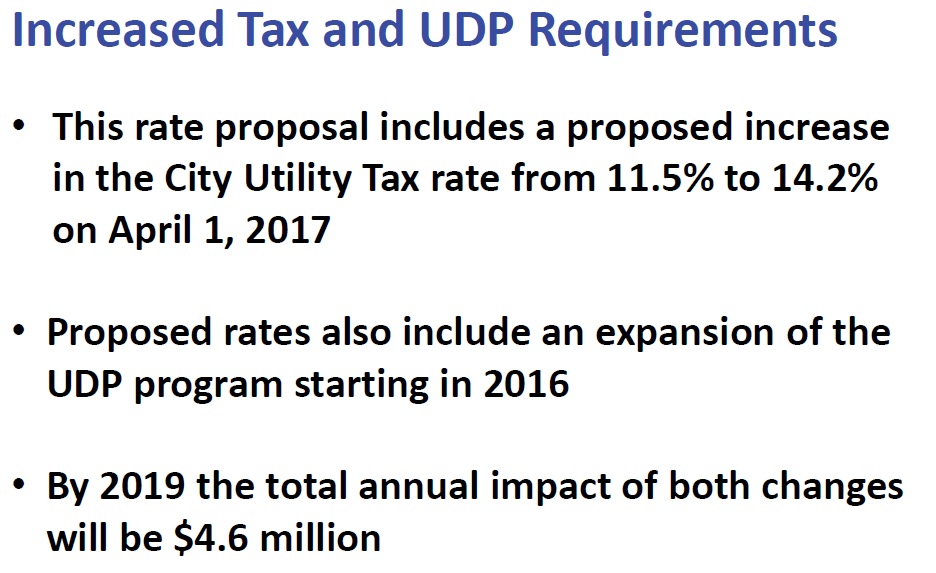 The Mayor already has a plan for how to spend the money.

Much of it will go to fund programs that are part of the city’s response to the homelessness crisis. Some will pay for the Clean City program’s efforts to clean up graffiti, illegal dumping, and litter pickup in city parks and the right-of-way. It will also fund pilot waste collection programs in Business Improvement Areas.

So what will be the effect on rates?  We’ll get to that in a moment, but there are a few other items that we need to factor in first. On the expense side, SPU and Seattle City Light have been expanding their Utility Discount Program (UDP) for low-income households; they already have 20,000 signed up and are marching quickly toward their initial goal of 28,000. But those discounts are an additional expense for SPU (and SCL, but that’s another conversation), so they need to be figured into the rate increase as well.  SPU also has some increased expenses for capital projects, including the new NCIS billing system and the North and South Transfer Stations.

On the savings side, SPU has actually been very effective at driving costs down. They re-bid their recycling contract and got favorable terms that saved the utility $1 million per year. They refinanced bonds to reduce their debt service payments, and they are using their cash balance more effectively to save on short-term debt expenses. If we looked at those factors alone, they would lead to a decrease in rates. 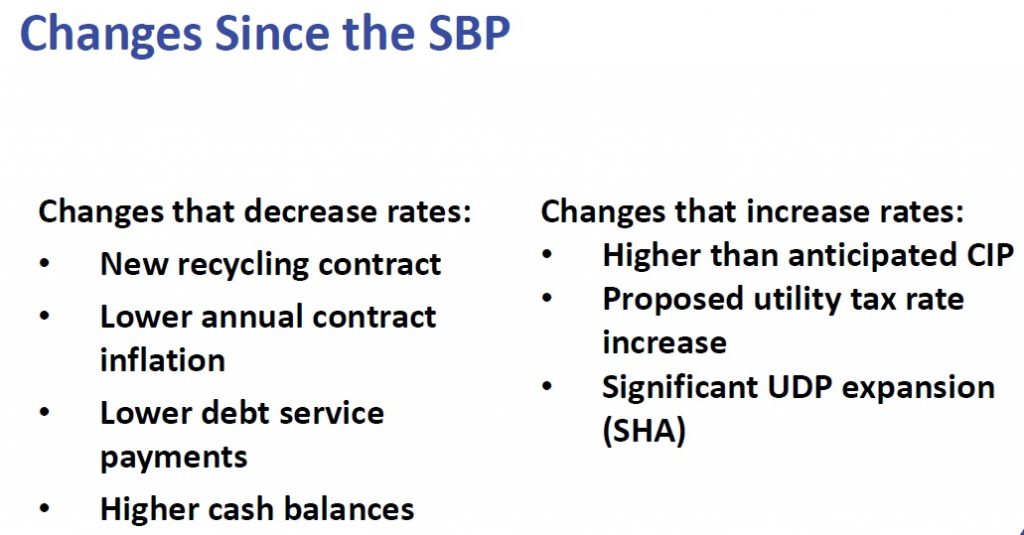 But when you put the tax increase, the UDP, the capital expenses and SPU’s cost savings together, you get this:

Compared to the rate increases that have already been approved in SPU’s Strategic Business Plan for the next few years, a typical monthly residential solid waste bill will be 65 cents higher next year, 10 cents higher in 2018 and 70 cents higher in 2019.  Alone that doesn’t seem much, but on top of the rate increases that are already coming, it starts to get big:  7.2% in 2017, 1.8% in 2018, and 3.9% in 2019, for a cumulative increase of 13.6% by 2019. In a time when consumer inflation has been consistently around 2%, that’s a pretty steep hike.

So basically what’s happening here is instead of allowing SPU’s customers to reap the benefits of a number of cost savings at the utility, the Mayor is offsetting savings with a tax increase that will keep the rates close to where they were planned to be — but put some more money into the General Fund.

Today’s presentation was a first conversation only; the tax and compensatory rate increase will be formally put up for vote in the CRUEDA committee on August 9th. It will be interesting to see whether any of the Council members push back or just let it slide through, since they all have pet projects they would like to find funding for.

There’s one more twist: if the Council does in fact pass the tax increase, then by state law the citizens of Seattle will have the opportunity to call for a referendum to reverse it. The referendum is not automatic; someone will need to file a petition and then within 30 days gather the signatures of at least 15% of the registered voters of Seattle in order to place it on the ballot. That’s a bit of a tall order, but these days nothing can be ruled out.