Wednesday morning the City Budget Office brought to the Council their second-quarter budget update: a collection of changes to the 2016 budget over the last three months to square it up with shifting priorities and any changes in the reality on the ground.

The good news is that the City received $3.9 million in external funding, from federal, state and county governments, for a variety of purposes.

But it also added about $40 million of spending as well, across 44 separate line-items. But the city budget is complicated, so let’s unpack that a bit.

$19 million covers the cost overruns for NCIS, the new billing and customer information system for Seattle City Light and Seattle Public Utilities. The money comes out of the funds for the city’s four utilities: water, drainage and wastewater, solid waste, and electricity. There will be rate increases to compensate for the increased expenses.

About $15 million is taken from a variety of accounts set aside for specific purposes (because of restrictions on how different kinds of revenues can be used), including:

Where things get touchy is the third big bucket of spending: from the General Subfund (GSF), the catch-all for expenditures that are being paid for from unrestricted revenues. Generally speaking all the city’s revenues are already committed to expenses, so if the Mayor wants to send more on something he needs to either cut expenses elsewhere or find a new source of revenues. The Q2 budget update has $5.8 million dollars of new GSF spending. $1.2 million is covered by new revenues, including grants. Another $2 million was set aside in the General Reserves fund in the original 2016 budget, which tends to happen when the Council expects to spend money mid-year but wants to hold back the money until there is a specific plan in place or a particular condition is met. That leaves $2.6 million, which the Mayor and Budget Office are proposing also to take from General Reserves; that’s not ideal, but given that the city’s total budget is over $1 billion, we’re talking about an amount that’s practically a rounding error. The natural, uncontrollable variation in many of the city’s revenue streams (like construction permit fees) are larger than that.

Most of the $5.8 million will be spent on one item: funding 42 new police officer positions. This is part of the Mayor’s plan to add a total of 200 new officers; 100 have already been funded and are in the pipeline, and these 42 would start the hiring for the remaining 100. Another $100,000 would go toward the Mayor’s action plan for improving public safety in the Chinatown/International District. $600,000 is an internal payment from the City to Seattle City Light to pay for street lights; it turns out that until recently the city didn’t have an accurate count of the number of streetlights, and had been underpaying.

The Q2 update also authorizes 79 new employee positions in city government. 42 of those are the aforementioned SPD officers; 20 are for the Department of Construction and Inspections, to deal with both the recent surge in construction projects in the city as well as the new tenant protection ordinances  that require enforcement. 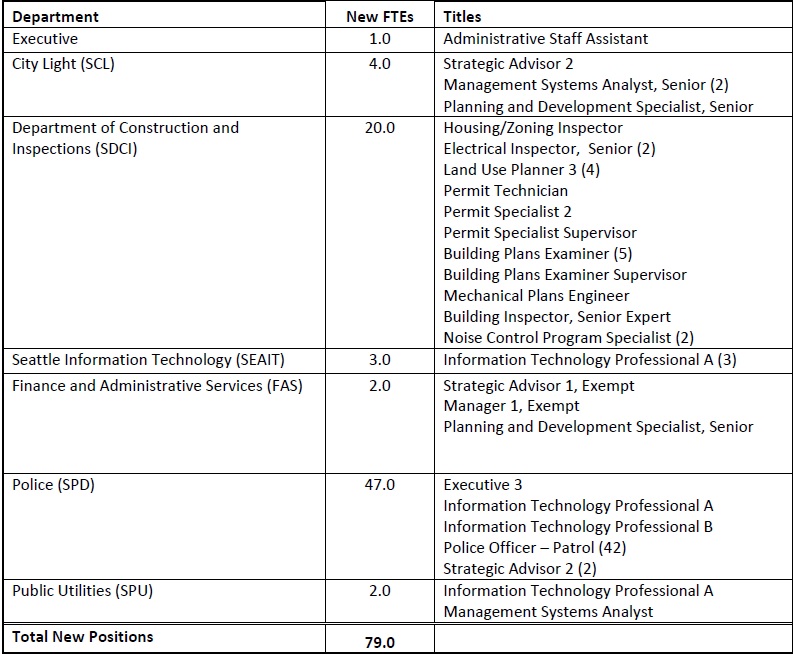 This was the committee’s first briefing, so they took no action. They are likely asking many detailed questions behind the scenes right now, which might lead to some tweaks when they next meet in two weeks.