When the Parks District Levy passed in the fall of 2014, the City Council committed to investing in a performance review and management of the Department of Parks and Recreation to ensure that levy funds would be spent well. They allocated $317,000 in the 2015 budget, and in the fall of 2015 Matrix Consulting was hired to perform a review. Last Thursday, Matrix delivered their draft report to the Council’s Parks, Seattle Center, Libraries and Waterfront Committee. (presentation here)

Matrix was asked to assess three specific areas of focus:

The consulting firm did several things in developing their report: they surveyed Parks department employees, they visited several city parks and did their own assessment in addition to surveying park visitors on their views; they looked at existing department practices; and they compared Seattle’s parks department with those of similar-sized cities.

There’s some good news: both Matrix and park users generally find Seattle’s parks to be well maintained. Some have issues with graffiti, others have bathrooms that need more frequent cleaning, but overall parks are in decent shape.

But let’s take a step back and look at the larger context of the Parks Department. Seattle’s collection of parks looks very different from all the other cities: a slightly higher acreage than the others, but far more parks in pure number: 465, almost twice the number of Denver, the next highest.

Seattle’s parks maintenance budget is middle-of-the-pack, but it has the largest number of full-time employees.

The numbers are a little more meaningful if you look at them as ratios. Portland and Seattle are outliers: Portland has a huge amount of acreage but in a relatively average-to-low number of parks; Seattle has an average-to-high amount of acreage, organized into a very large number of parks. Seattle’s staffing per acre is pretty reasonable, but its staffing per park looks very low. Expenditures per acre is low; its expenditure per park is ridiculously low.

But those four ratios alone don’t tell the whole story; what they’re missing is that not all parks are the same, and not all park acres are the same. Broadview Park is one tenth of an acre; Discovery Park is 512 acres. Seattle has mini parks, pocket parks, neighborhood parks, community parks, large urban parks, downtown parks, greenways, greenbelts, specialty gardens, and golf courses. It has parks that are used heavily, and others that see much less traffic. It has old parks, and new ones. It has ones with large swaths of natural woods, and others that are mainly parking lot and playground.

Which leads us to one of the bigger problems at the Parks Department: it’s managing maintenance tasks across all of its parks using an antiquated system (called PLANT). It lists maintenance tasks for various parks and allows for tracking of time spent. But maintenance workers submit timesheets on paper rather than entering data directly into the system, and a year ago only about 50% of the timesheets were being submitted (P&R claims that number is now 75%). But the worse problem is that PLANT doesn’t support the modern standard for park maintenance. The best practice today, as explained by Matrix, is “asset and work order management” in which an inventory of assets at each park is kept, including restrooms, play equipment, parking lots, and walking paths. Each asset has an assessment of its current condition and a history of maintenance work performed. More importantly, each asset has a customized maintenance plan, based upon both the intensity of use and its condition.

This is a really important point: not every park restroom or playground needs the same level of maintenance. Beyond the level of use it gets, its condition is very relevant: a newer and/or updated bathroom requires less maintenance than an older one (and taken to the extreme: many park visitors will think that an old park restroom is dirty and poorly maintained regardless of how often it is serviced). To do maintenance right, the department needs to have a current assessment of every asset’s condition and intensity of use, assign an appropriate maintenance level based on those factors as well as the type of park and the time of year, and then allocate the right amount of maintenance resources to that asset to meet the standard.

Today, without any of the infrastructure to do that, the department assigns a generic “gold standard” to everything without regard to its condition . Sometimes they meet it; mostly they don’t.

According to Matrix’s assessment, the “gold standard” currently being used is far higher than is required, and it leads to an inability to properly prioritize maintenance work — and to appropriately assign resources. And the math bears that out: Parks and Recreation has  the equivalent of 249 full-time maintenance employees; that would be enough to cover about 2/3 of the number of hours required by the “gold standard” maintenance plan. But as we saw earlier, Seattle’s staffing level is on par with comparable cities; it’s just not being used well.

The math also shows another problem that stems from the department’s outdated practices: they can’t track their own maintenance employees.  With their current staffing level, they should have about 425,000 hours of labor. Instead, they only have about 219,000 — just over half. In the committee presentation, Parks officials claimed that it could be several factors, including poor tracking of hours (which would match the observation that many timesheets aren’t getting submitted), vacancies, and extended leave. Council President Harrell was unsatisfied with that response; while he claimed that he hasn’t observed parks maintenance staff goofing off, he expected the department to investigate all possibilities, including that they aren’t working efficiently and aren’t being managed effectively.

Now the good news is that the Parks Department is working on implementing a new, modern asset-management and work-order system, which they expect to have fully rolled out in the first quarter of 2017. Parks is also doing a comprehensive condition assessment in all of its parks as part of collecting data to feed into the new system, and they pre planning a “citizen assessment” program where trained citizens help to do ongoing assessments of approximately 10% of the city’s parks each year.

Having the new asset management system in place also creates data for informing and managing the capital investment program, prioritizing the assets most in need of replacement or refurbishing.

To the credit of Parks Department, Harrell did also acknowledge that its budget was cut considerably during the recession, and not much money was put back in until the Parks District Levy was passed in 2014. Seattle is starting to see the benefits of that levy: in 44 parks the number of restroom cleanings recently doubled from twice a day to four times a day.

A topic that didn’t get any discussion with the Council was the employee survey results in the draft report. While there were many positive aspects, it did point to issues with managers and supervisors, and the effect of the limited budget on equipment. 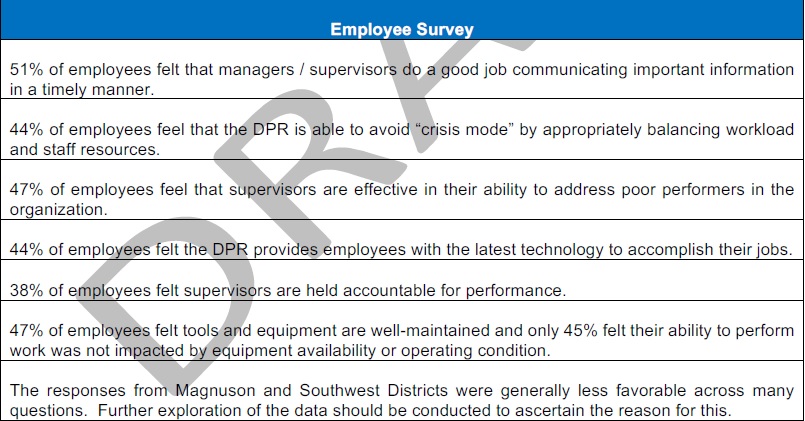 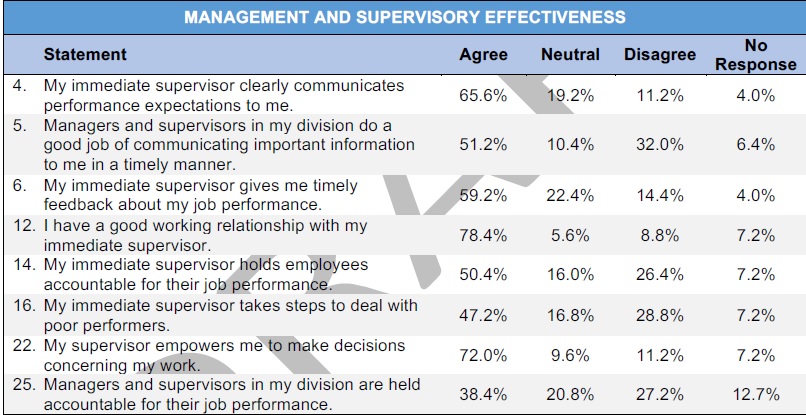 The department’s maintenance staff is divided into nine districts, each of which has crews which cover parks along a route in its geographic area. The Magnusen district team employees had particularly low survey scores on many aspects.

Matrix made a long list of recommendations, with the new asset-management system topping the list. Also included were guidance on establishing new park maintenance standards once the new system is in place, as well as work prioritization, staff allocation, and ongoing re-assessment. In addition, they recommended that the department be more transparent and proactive in publishing information to the citizens of Seattle, and re-think its overall performance assessment both in the short-term and long-term. Finally, they recommended several other areas to be assessed that were outside the scope of this first report:

The big takeaway is that Parks and Recreation is doing well, if the standard being used is that of a mid-twentieth century parks department that has struggled for funding until very recently. But Seattle’s portfolio of parks, with a very large number of small parks, looks very different than all its peers, and the department desperately needs to modernize many of its practices, including IT, data collection, asset management, planning, and management in order to effectively steward the city’s parklands.

The good news is that Parks and Recreation is under new leadership with Jesus Aguirre as director. Aguirre is determined to make improvements, and seems up to the task. His deputy superintendent, Christopher Williams, promised the Council that he would deliver a business plan that would address many of Matrix’s recommendations within 60 days — possibly too late for changes in next year’s budget.