Last Wednesday the Council returned to the question of unionizing Uber and Lyft drivers. It’s still a mess, and the Mayor is making it worse.

Last December the Council passed an ordinance granting Uber drivers the right to unionize. That was the easy part; the harder part is the “rulemaking” required to operationalize that. In traditional form, the Council’s ordinance left the rulemaking to the executive branch, and required that the process be completed by September 19th.

The Mayor took the unusual step of neither signing nor vetoing the ordinance, opting to allow it to become law without his involvement. In an announcement accompanying his decision, he stated that he felt the bill had serious flaws.

For some reason, the Mayor passed the rulemaking to the Finance and Administrative Services (FAS) department, instead of the Office of Labor Standards. This was new territory for them, but they plunged in anyway. They asked Uber, Lyft and the other transportation-network companies to provide demographic information on their drivers to inform the process, but to no one’s surprise the companies chose not to respond.  In June and July, FAS organized seven stakeholder meetings with drivers and management representatives to understand the issues; in total they had about 200 participants (for context, there are about 13,000 licensed and permitted for-hire drivers in the Seattle area). 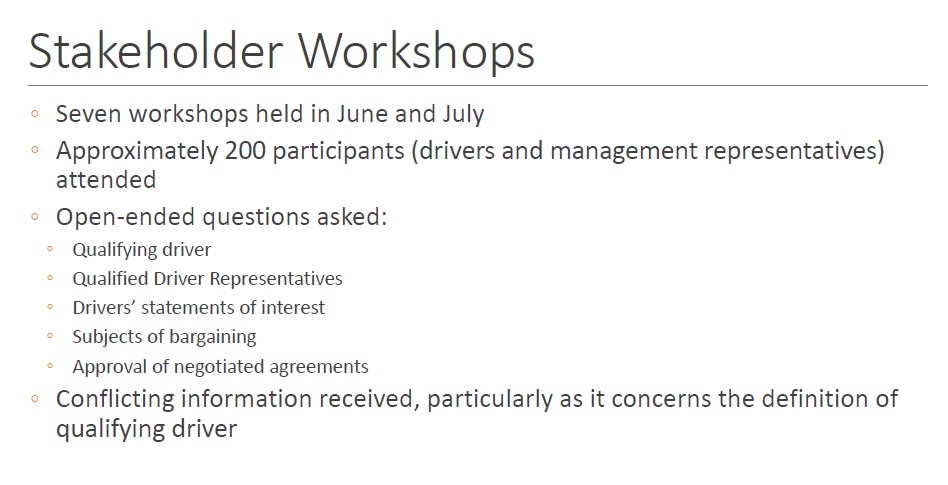 Unfortunately, (as previously discussed) there was a deep split among the drivers on the question of who should be a “qualified driver.” That’s because there are at least two sub-communities of drivers: those who drive as their fulltime job, and those who drive part-time for supplemental income. The issues they care about overlap but not perfectly, and many of the fulltime drivers would like to exclude part-time drivers from the set of qualifying drivers so as not to impede their ability to negotiate better terms (part-time drivers care a lot more about flexibility than about maximizing hourly pay).

Since they didn’t discover the depth of the divide until July, they have had little time to propose a solution –or, as Council President Harrell is fond of saying, just “rip the band-aid off” and make a hard decision. So FAS and The Mayor’s office have come back to the Council and asked it to extend the deadline an additional six months.

In response, Harrell’s office drafted a bill to do just that, and when it came up for discussion last Wednesday at Harrell’s Education, Equity and Governance Committee, he and Council members Juarez and Gonzalez took the opportunity to ask FAS and the Mayor’s designated representative, David Mendoza, some hard questions.

First question: what do they intend to do with the extra time?  FAS’s big idea is to conduct its own quantitative survey of drivers in order to collect the data that the companies refused to hand over.

Harrell didn’t think that would be enough; he wanted to see FAS do real stakeholder outreach (with more than 200 people) to try to broker a compromise on the “qualifying driver” question. FAS and Mendoza balked at that, expressing skepticism that a compromise would be found.

But Harrell and Gonzalez observed that a survey does not take six months to complete — why do they need so much more time? And that’s where the conversation got interesting — and contentious. Mendoza responded that the rest of the time was for “the legislative process.”

Wait a minute — what legislative process? As Harrell pointed out, the original ordinance says very clearly that the executive branch owns the rulemaking process, which should take place outside of the legislative process. Mendoza’s response was stunning: he reminded the Council members that the Mayor had not signed the legislation into law, and Mendoza let them know that he preferred that the controversial decision on “qualifying drivers” should be done through legislation, not rulemaking. In other words, Murray is evading a tough decision that clearly belongs to the Executive Branch by passing the buck over to the Council (in fairness to the executive branch, FAS is moving forward with rulemaking on other aspects of the ordinance; so far this is the only issue they are attempting to evade).

This was new information to the three Council members present, and Harrell in particular was pissed. Under questioning from the Council members, Mendoza was forced to admit that the Mayor wouldn’t even commit to signing the eventual legislation deciding the “qualifying driver” issue. Murray’s message was clear: this is the Council’s mess, and he will take no responsibility for it.

Harrell heard that message loud and clear, and was ready to drop the extension altogether, leaving the original September 19th deadline in place. Since the executive branch was pushing the problem back on the Council without any sincere offer to help solve it, he didn’t see much point in helping the Mayor out of his own hole. Leaving the deadline in place would force the issue, requiring the Mayor to either flout an enacted city ordinance or step up and decide the issue (it didn’t help that FAS didn’t get around to doing their stakeholder groups until June and July).  Cooler heads prevailed, though, and in the end Harrell, Juarez and Gonzalez passed a 60-day extension (until November 13th) out of committee that will either get approved by the full Council in its first meeting in September, or if behind the scenes negotiations go well, turn into a longer-term extension with a specific work plan that would get the city closer to a decision.

There is plenty of dysfunction to spread around. Beyond the Council passing legislation last year that forces that forces the Mayor to make an unpopular decision, and the Mayor now passive-aggressively refusing to abide by enacted law, at last Wednesday’s meeting the regional head of Uber showed up and spoke during the public comment session. Despite her company’s continuing refusal to provide data to the city, she insisted that the city must allow all drivers to participate as “qualified drivers” — a self-serving statement as it would dilute the voter base to Uber’s advantage in negotiations.

So far, Uber is coming out on top. The status quo favors the company. An extended rulemaking process favors it. Dueling city legislative and executive branches favors it. A large, diverse base of drivers divided against itself favors it. It’s not impossible for the city to get its act together — yet — but the current trend does not inspire optimism. Perhaps Council member O’Brien, the original bill’s sponsor, will step up and try to sort the mess out.