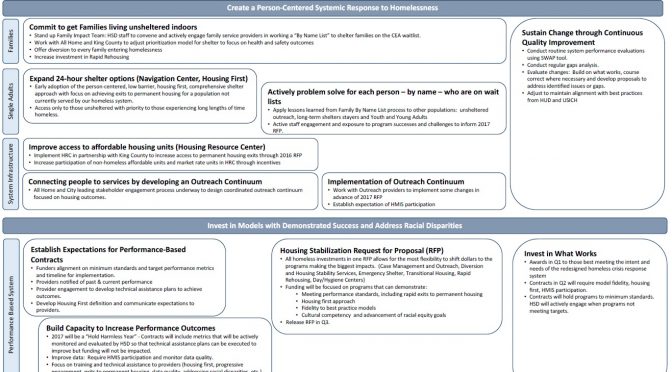 This is the second installment of a two-part report on last week’s big announcements around the city’s response to the homeless crisis in Seattle and King County.

In response to the Poppe and Focus reports discussed in Part 1, the city’s Human Services Division (HSD) announced a new initiative to respond to the homeless crisis called Pathways Home.

The Pathways Home initiative is an attempt to adopt many of the recommendations in the Poppe and Focus reports, which are spread across a number of programs and issues. 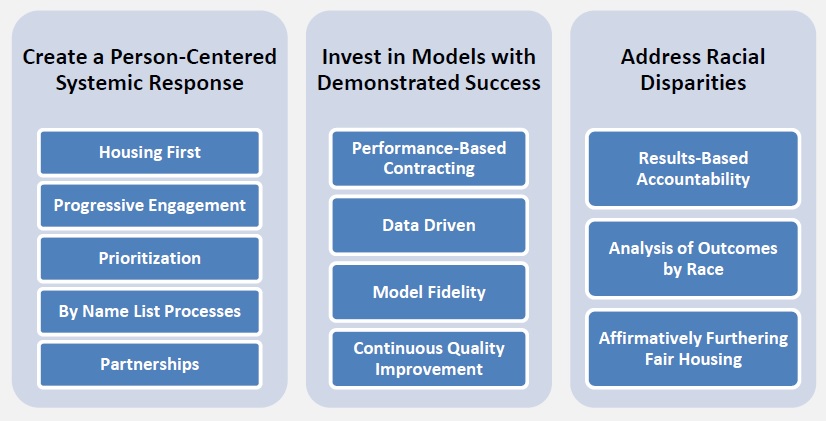 Among the recommendations that the plans adopts:

The plan also makes vague commitments to other big principles without any details or concrete next steps for achieving them. Those include: 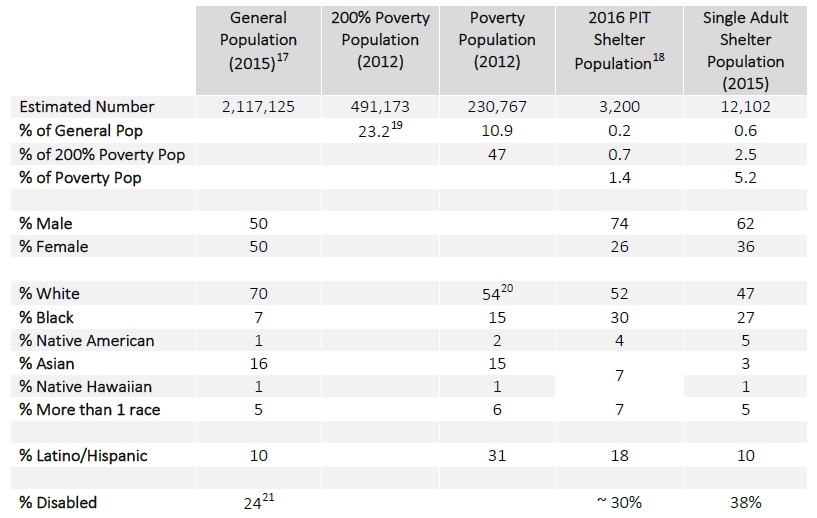 The plan also tries to take credit for several things already in place, including:

And it doesn’t speak to several issues raised prominently in the report. The most obvious hole is the governance issue with All Home. Seattle, as the biggest player among the funders, ought to be leading the charge to reform All Home’s governance structure but is silent on the issue.

But by far the biggest issue is the lack of substantive and timely reform of the shelter system. Creating a 75-bed Navigation Center is a start, but a small one. Beginning in 2018 — 15 months from now — HSD claims that it will require shelters to meet the new performance standards, including HMIS and CEA participation, and lower barriers to admission. But it has not committed to requiring shelters to be 24-hour, and that is a huge problem. The plan says, “By embracing a housing first, low barrier, service-oriented shelter model, the City is committed to making shelter accessible and moving away from survival-only shelter models to comprehensive shelters that focus on ending a person’s homelessness.” That’s a lovely vague sentiment that evades the hard decisions required to truly expand 24-hour shelter availability, let alone to make it universal in the shelter system.

The plan is also light on efforts to increase the availability of affordable housing units. It makes reference to the 2016 Housing Levy, and to the Seattle Housing Authority (SHA) as a key partner, but its big bet is a new Housing Resource Center (HRC) that it claims will have a magical ability to convince landlords to participate in affordable housing programs when past efforts have failed:

“There is not a city in the country that has enough affordable housing stock to serve everyone in need, and Seattle is no exception. In order to increase access to units, the HRC must also focus on increasing the availability of private, market rate units for people exiting homelessness. This will require engaging with private developers and property managers to help them understand the financial argument for including their units in the Housing Resource Center. This is a different approach to the way our community has historically engaged landlords, with a focus on the civic responsibility and being a good neighbor to those in need. While that approach has secured the participation of some landlords, it does not appeal to the business needs of a property developer. Rather than having a social service focus, the staff at the HRC will have a real estate focus and can recruit both affordable and market rate units based on sound business arguments and incentives for participation.”

The plan also ignores the issue raised by both Focus and Poppe that the city does not prioritize its own publicly-funded affordable housing toward re-housing the homeless.

And finally, it does not mention the critical shortage of clinical treatment facilities and programs for homeless people with mental health and/or substance abuse issues. Even if they are sheltered under a “housing first” policy, without the programs available to treat them they will not be able to successfully exit back to stable, independent living in permanent housing.

The good news in the plan is that the city is honestly embracing many of the critiques raised by Focus and Poppe in their reports, and finally starting to get its act together on creating a funder-driven, person-centered system that collects and analyzes data and uses it to improve performance.  The bad news is that it took far too long to get to this point, it will take into 2018 to really get it working (assuming everything goes according to plan), and several important issues are still not addressed. 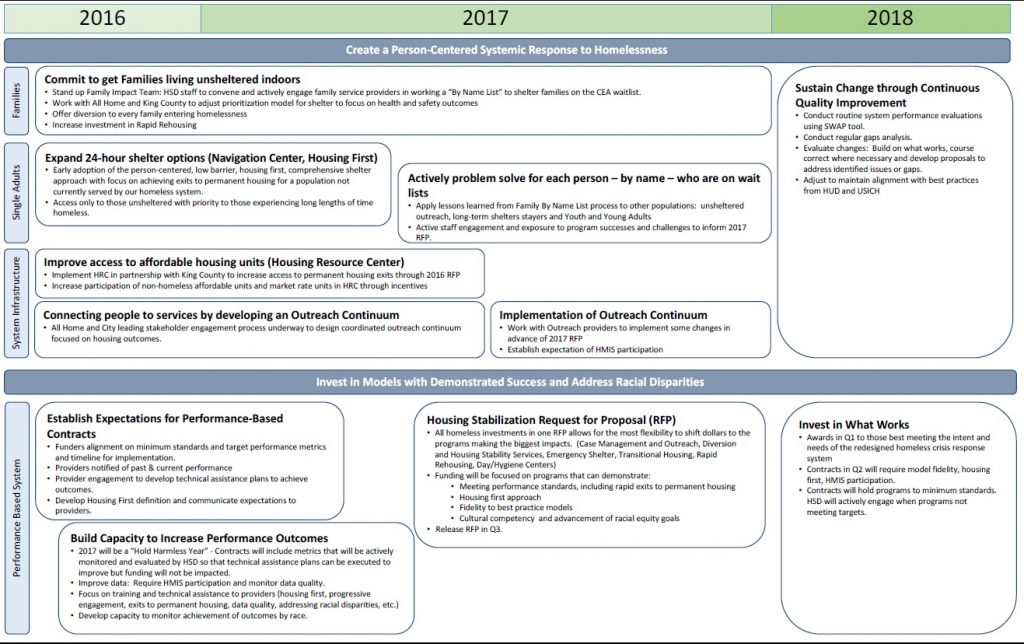 The rubber hits the road, though, in late November when the Seattle weather turns cold enough that living outside becomes hazardous. Under the new plan, this winter’s homeless response will be, to a first approximation, no different than last winter’s. If everything works out, then in December the pilot Navigation Center will open 75 beds of 24-hour, low-barrier shelter space, but that will hardly make a dent in the need for comprehensive shelter in Seattle. And none of the other shelters funded with public resources will be required to change their hours, restrictions or outreach practices for another year.

In fairness to the providers, running a low-barrier, 24-hour shelter is far more expensive and logistically complex than an overnight, selective-admission shelter; the city certainly can’t expect existing shelters to make the shift overnight — even if they could afford it today, which most can’t. And HSD’s budget for shelters will need to change (and increase) dramatically if it wants to drive a change from the broken shelter system today to an effective, comprehensive one.  That will be an enormous challenge for HSD, the Mayor, and the City Council as they enter the fall budget development process.

Nevertheless, reforming the shelter system is the most important step the city must take, and it must do it immediately because nearly all the problems start to get better when there is an effective, comprehensive 24-hour shelter system in place. People can come in off the streets knowing that they have a safe place that meets their needs. The shelters become a vehicle for the coordinated entry system and for effective outreach and referral to services. People can more effectively move toward getting re-housed as they stabilize. And the argument over unsanctioned encampments fundamentally changes — and eventually subsides — as comprehensive shelters become a valid, recognized and preferred alternative to continuing to live outside.

One of the key recommendations of Focus and Poppe is “Act with urgency and boldness.” The Pathways Home plan is a constructive step forward, and over time if funded appropriately and executed well it will substantially improve the city’s homeless crisis response. But its actions lack true immediacy and fail to rise to the call to urgency — it’s a two-year plan that nibbles around the edges for the first six months or more while it builds capacity and plans for restructuring future contracts with providers. By March it will be clear that we as a city have once again failed the vast majority of our homeless brothers and sisters through the winter as we respond with neither boldness nor urgency. Certainly the more fundamental and far-reaching structural changes will take time to enact, and that needs to run its course. But the question that must be asked and answered immediately is “What can we do now to accelerate the expansion of comprehensive shelters in time for this winter?” The Pathways Home plan neither asks nor answers that question, and that is its biggest failing.