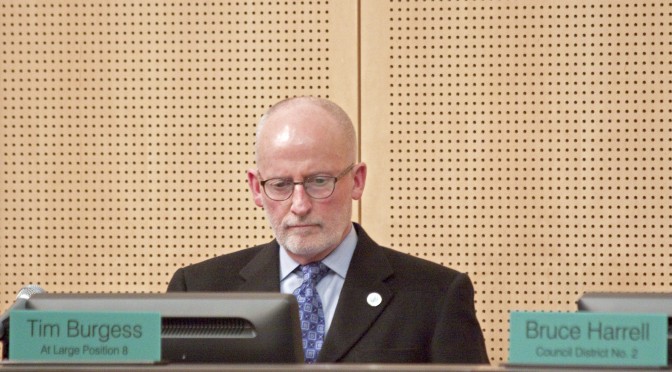 The City Council has eleven meetings scheduled this week. Yikes.

Monday morning’s Council Briefing will include a review of the Mayor’s committee appointments of young people through the Get Engaged program.

Tuesday morning the Civil Rights, Utilities, Economic Development and Arts Committee meets. It will take up the secure scheduling ordinance again, hoping to finish consideration of amendments (Council member Burgess is likely to propose some) and to vote to send the bill to the full Council for final approval.

Tuesday afternoon the Energy and Environment Committee meets. It will consider the bill adopting SCL’s retail rates for 2017 and 2018. This is intended to be a pro-forma action based on the rates already in the Strategic Plan, which the Council has already approved, but it will be interesting to see whether committee chair Kshama Sawant chooses to re-litigate her previous objection to having lower rates in some cases for larger business customers than for residential customers. UPDATE: Sawant has said she will vote against the rate change.

The Energy and Environment Committee will also consider a proposed ordinance, introduced by Sawant, that would limit the amount of security deposits and move-in fees that residential tenants may be charged and allow tenants to pay security deposits, non-refundable move-in fees, and last month’s rent in installments. It’s very curious that this has been referred to Sawant’s committee, rather than either the Affordable Housing or Civil Rights committees, and suggests that there may be political issues with moving this forward through the Council — at least in the bill’s current form.

Wednesday morning the Gender Equity, Safe Communities and New Americans Committee meets. It will hear a presentation from Moms Demand Action on its Be Smart gun safety program. It will also hear an update on SPD’s response to the City Auditor’s recommendations on reforming its management of overtime.

Wednesday at noon the Sustainability and Transportation Committee meets (rescheduled from last week). At noon there is a special short meeting of the Full Council, and at 2pm the Human Services and Public Health Committee meets. The agendas for the meetings have not yet been published, but it’s expected that the HS&PH committee will discuss last week’s introduced ordinance to restrict “sweeps” of homeless encampments (committee chair Bagshaw has promised final legislation by the end of the month).  UPDATE: The S&T meeting will discuss a “bold new initiative” to electrify Seattle’s transportation system, and the Freight Master Plan. The HS&PH Committee will take up the EDGE (aka the “Jungle”) cleanup operation plan submitted by the Mayor last week.

Thursday afternoon, the Planning, Land Use and Zoning Committee meets to continue its deliberations on the 2035 Comprehensive Plan.

Friday at noon, the Civil Rights, Utilities, Economic Development and Arts Committee will meet again, and at 2pm the Parks, Seattle Center, Libraries and Waterfront Committee meets. The agendas have not yet been published for these meetings.  UPDATE: The Friday CRUEDA meeting will consider the appointment of Mami Hara as new Director of Seattle Public Utilities. The Parks committee meeting on Friday will take up the recently-released community center strategic plan.

I’ll update this most Monday morning, after the Council Briefing, when there will be more information about the agendas for the various committee meetings being held this week.  See updates above.