Yesterday afternoon, in a surprise move the Mayor and three Council members announced that the controversial North Precinct police station would be paused for reconsideration.

I won’t rehash the history of the project again; you can read my previous coverage here and here.

Mayor Ed Murray joined Council members Lorena Gonzalez, Tim Burgess, and Debora Juarez in announcing that the North Precinct project would be taken off its current schedule to “conduct a Racial Equity Toolkit review of the proposed precinct, and review key design elements that increased the project cost.” Gonzalez, Burgess and Juarez were the most vocal supporters of the project: Burgess is a former police officer, Juarez’s district covers much of the North Precinct, and Gonzalez chairs the Council committee that oversees the Seattle Police Department.

The announcement makes clear that the four officials are still committed to building a new North Precinct police station — just not the current proposal. The new plan involves not only completing the Racial Equity Toolkit evaluation required by last month’s Council resolution, but also specifically revisiting elements of the plan to reduce the overall cost.

While it’s painful for Burgess and Gonzalez, who have both tried to negotiate an acceptable compromise, the big loser from this announcement is Juarez, who stuck her neck out the farthest in full-throated support for the new precinct. Despite the face-saving attempt in the announcement to assert that the project is still alive and just taking a step back and slowing down while the city leaders listen to the community, there is no fixed timeline given for completion of the Racial Equity Toolkit analysis, nor for the redesign to reduce the cost. So the big question is whether the North Precinct project will ever come back to life.

Council member Sawant is betting the answer to that question is “no.”  She and her “block the bunker” supporters celebrated last night, and are already planning a rally to organize for part two: getting the funds reallocated to build 1000 units of affordable housing. Of course, “the funds” is a squishy term, since the money wasn’t sitting in a bank waiting to be spent; the plan was to issue $100 million of municipal bonds to fund the project and cover the balance with cash assets (with only $15 million of that already identified and set aside). Nevertheless, this is classic Sawant strategy, using the momentum from one win to push forward to the next. But it’s important to note that she and her army of supporters are giving no ground, and will fight to the end so that no North Precinct building is built — not even a scaled back one. They even staged a tour of the existing station (with press and activists friendly to their cause) last Friday to make the case that a new station is unnecessary. The take-away: putting this project back on the table, in any form, will be met with populist resistance.

Council member O’Brien, who joined Sawant last month in opposition to the resolution keeping the project alive (while falling short of approving it), issued a statement squarely aligning himself with Sawant and the activists and positioning the project as “taking the necessary pause to reflect on whether this is the best use of our dollars” — an existential question rather than a question of scale. It will be difficult to sell him on reviving it.

Council member Johnson also had a statement, suggesting that he leans in favor of building a new station with a different design, but leaving himself wiggle room by positioning it as “the next design” rather than a revision of the existing one.

As of this writing, Council members Harrell, Bagshaw and Herbold have not issued statements. All three voted in favor of last month’s resolution to keep the project alive, but none of them could be labeled advocates. It wouldn’t be surprising for them to stay clear of the fray until the Racial Equity Toolkit analysis is done and a revised design is produced — if that day ever comes. They have nothing to gain by taking a side today, and nothing to lose by sitting on the sideline.

The most interesting positioning yesterday was the Mayor’s. He blamed the project on his predecessor, Mike McGinn, as a means to embrace derailing it for now and ditching it entirely if politically expedient in the future. In an interview with KING5 , Murray said,

“There was an attempt by my predecessor to make a proposal that combined several precincts in one and made the building more expensive. It was built to the highest environmental standard, it made the building more expensive. There are real tensions in this community around race and policing. So I think we need to back up. Can we build a less expensive building? Should we build more than one precinct in the north end? And we need to spend time having a discussion around how this police station can work with the issues of police reform that we’re trying to address in this city and in this nation when it comes to the issue of race.”

While he raises many points about the questions that should be asked and answered, the finger-pointing at McGinn deserves some serious fact-checking, and it simply doesn’t stand up to scrutiny.

As documented in Murray’s official bio, he took office on January 1, 2014. At that time, there were five police precincts, including the North Precinct covering the same territory as it does today. But courtesy of the Internet Archive, we can look back over the years and see that all the way back to 2002 and at every point in between there have been the same five police precincts. The new North Precinct station is simply a replacement for the existing one, serving the same (admittedly huge) area of the city.

But let’s also look at the underlying assertion: that the North Precinct was planned and designed under McGinn’s administration, not Murray’s.

Here’s the timeline for the project that the city presented back in June. 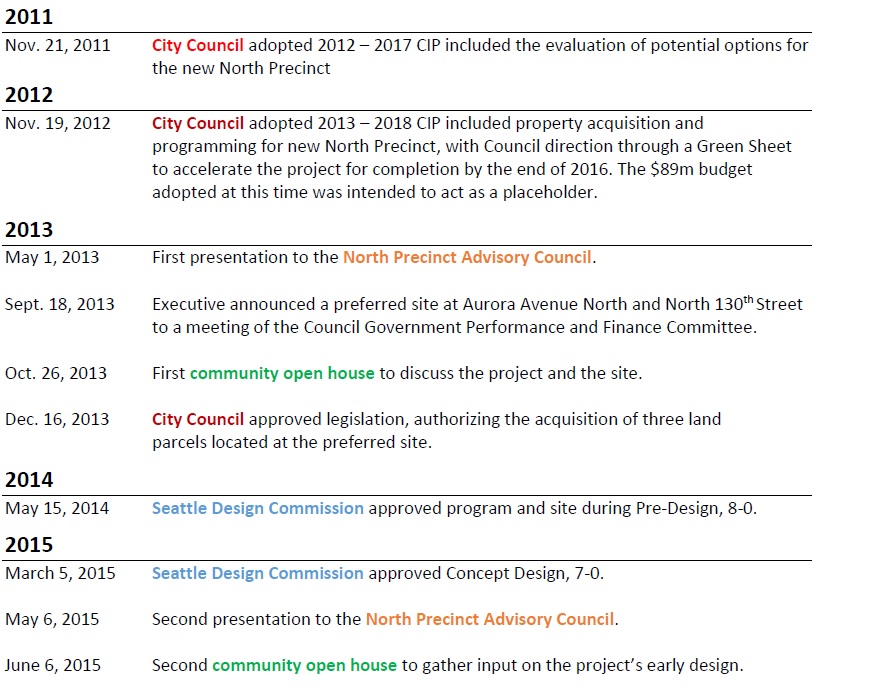 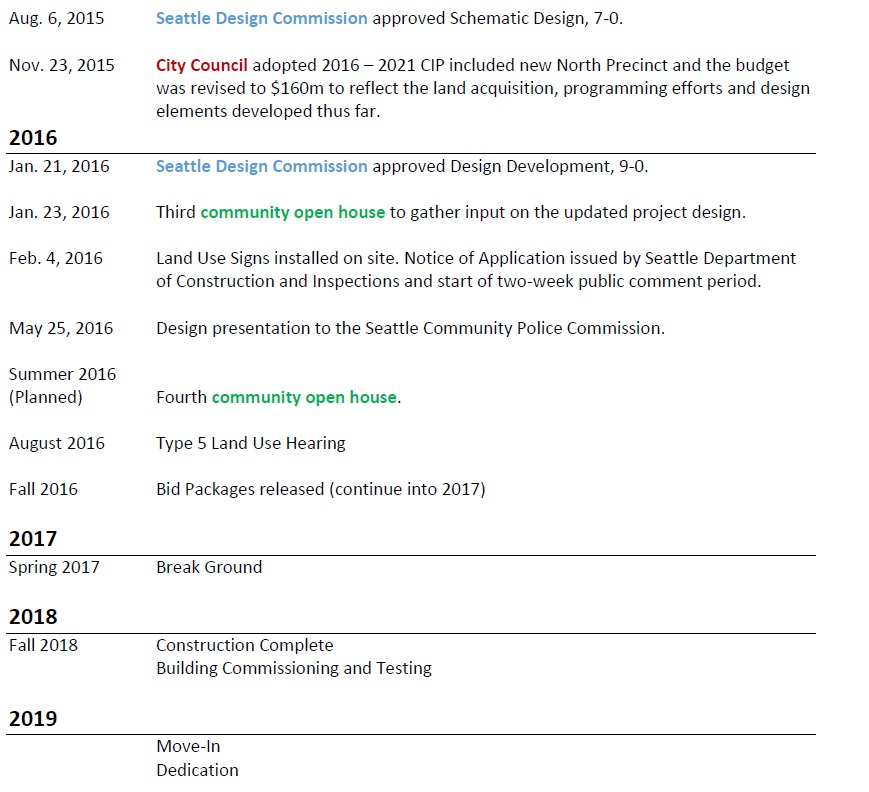 On January 1, 2014, when Murray took office, the city had acquired land for the project and had established a placeholder budget of $89 million, but it did not have a design for the building yet. The first iteration of the design wasn’t made public until a review with the Seattle Design Commission on May 15, 2014, more than four months into Murray’s tenure — and more than enough time for him to assume responsibility for the project and redirect it as he saw fit.  And the budget wasn’t raised to $160 million until November 2015, almost two full years into Murray’s term as Mayor. You could blame McGinn if you objected to the placement of the site, but the building design — and the ridiculously high budget — is squarely Murray’s responsibility. The high environmental standards, the “critical infrastructure” seismic reinforcing, the training facility, the community meeting rooms, all were introduced on Murray’s watch. It’s completely disingenuous for him to blame that on McGinn.

So where does that leave us? Three Council members want to see a revised project move forward, and the Mayor is voicing his support but is also carefully distancing himself so that he could drop it with minimal political repercussions. One Council member wants it declared dead and the money spent elsewhere, and another is leaning heavily in that same direction. Four Council members are playing it safe and not committing to a path forward. The “kill the project” camp has already built a formidable, loud and disruptive activist movement, and any attempt to revive the North Precinct with a new design will be met with fierce resistance regardless of the price tag or the design’s merits. Without a secure majority in place, and with an election for Mayor and some Council positions coming up next year, the city’s elected officials may decide to spend their political capital elsewhere rather than stage an ugly fight in an election year. So this may be the last we hear about the North Precinct station for several months, and perhaps years.

As an aside: I suspect the Seattle Design Commission is fuming, given that they wasted time on a review of the latest North Precinct revision mere hours before the project was derailed.