This is the first in a multi-part series of articles on the Seattle city budget. Quite frankly, I have no idea how many parts there will be in this series. The Mayor’s proposed budget is over 1600 pages, and I’ve barely scratched the surface, so I don’t yet know what I’ll find as I dig in. Plus, the Council hasn’t even begun their work on modifying it, and I have no idea how many articles will need to be written about that process over the next eight weeks. So bear with me as we walk this path together; I promise you it will be worth it.

The Mayor proposes spending almost $5.4 billion in 2017, and over $5.5 billion in 2018 — a 5.7% increase next year, and another 4.1% the following year. The best word to describe this proposal is “incremental,” as there are no major restructurings and the money is fairly well spread around. That said, the money — and the increase — is concentrated: the ten largest departments have about 86% of the budget and receive 78% of the increase in funds. So for the purposes of understanding where the money is going, as a first approximation we can ignore 41 of the 51 departments and just focus on the top ten.

The ten largest departments are (with their actual 2016 and proposed 2017 budgets, in thousands of dollars):

You may not recognize the last item on the list: Personnel Compensation Trust. This is a collection of six different funds covering various personnel expenses, including life insurance, unemployment insurance, and transit benefits. The vast majority of it ($210 million in 2017)  is in one fund: healthcare for city employees. Seattle will spend nearly a quarter of a billion dollars next year on city employee benefits, more than it spends on the Fire Department.

Here’s another way to look at the “top ten” departments: 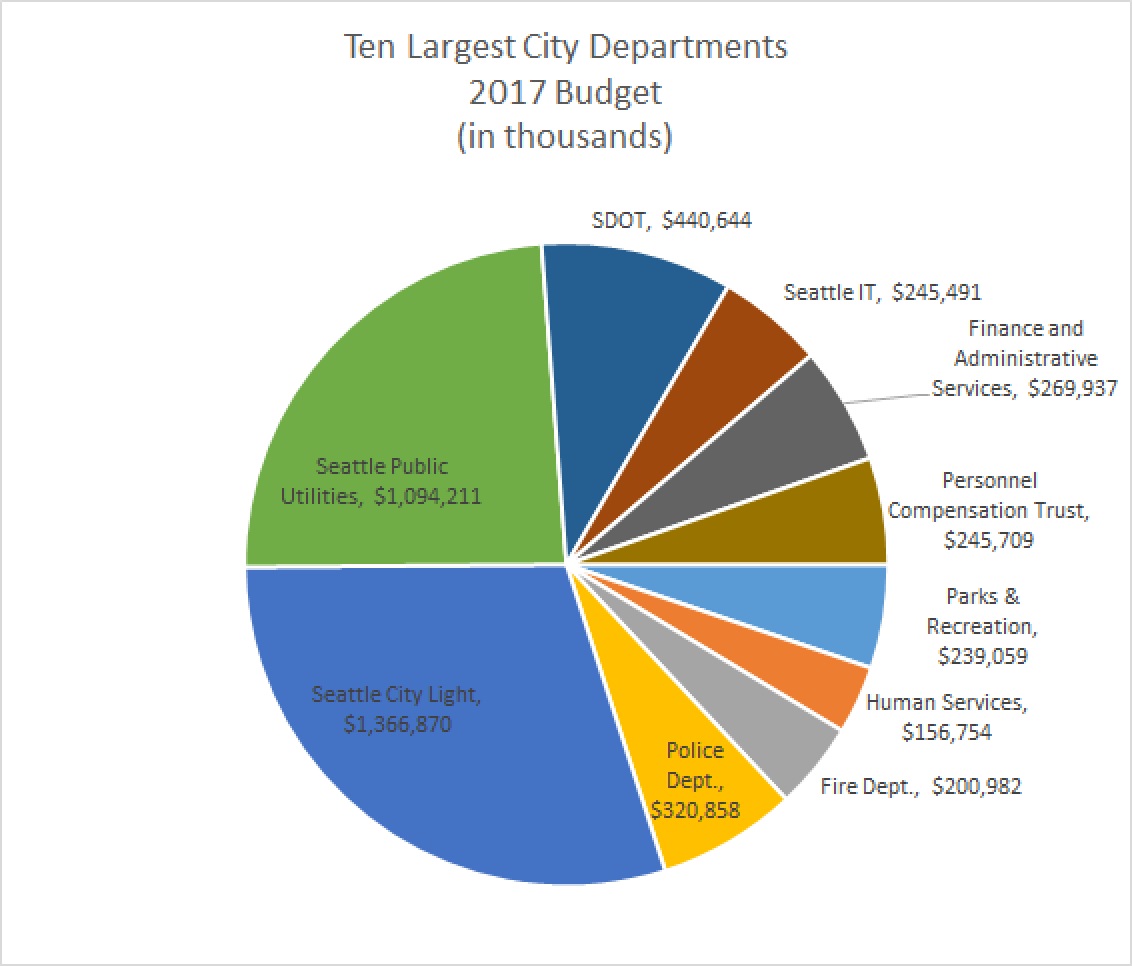 You can see that there are two big fish:  Seattle Public Utilities and Seattle City Light.  You could almost make the case that these two should be left out of the entire discussion, since each runs as a separate company with its own profit & loss sheet and its own revenue model to balance out its expenses. But their footprint in the city is huge: they have infrastructure everywhere; they deliver critical services to residents, businesses and other city departments; they share city resources such as IT; and they pay taxes that fund other parts of city government. And they are both under the control of the Mayor and the City Council.

You do see a big relative bump up for Seattle IT: this is a new department created this year by consolidating 650 IT staff from across city government into a single monolithic organization. On top of that, they are building out a new “next generation data center” for the city. But most of the budget jump is simply dollars and people being moved from other departments as the consolidation ripples through the city’s budget.

You also see SDOT’s budget bounce down and back up. I enjoyed this snippet from its chapter of the budget: 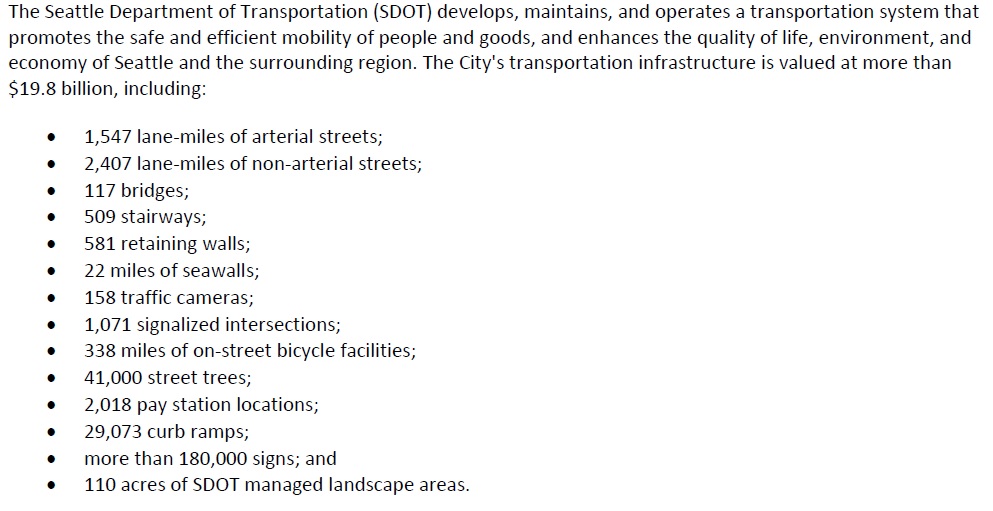 The big swings in its budget come from three sources: natural variations in capital projects from year to year, the ramp-up of projects paid for by the Move Seattle Levy, and the “Center City Connector” streetcar project in 2018.

Seattle Public Utilities also sees some modest growth, most of which is due to a variety of capital projects.

The rest of the top ten departments are, quite frankly, pretty boring. Human Services  sees a 10% boost in 2017 mostly due to a $12 million increase in funding for the homeless crisis response, but gives a bit of that back the following year. The Parks and Recreation Department will begin to receive additional funds from the recently-passed Parks Levy next year, and those dollars will be spread across a number of programs.

The Mayor’s Office published a bullet-list of highlights from his budget proposal. If you listen carefully, you can hear Julie Andrews singing “These are a few of my favorite things” in the background while he introduced them (or perhaps that was the activists who were locked out of Council Chambers). Several of his highlights are from the “top ten” departments, including:

The Mayor also lists a number of other investments, including early learning programs, career opportunity programs for youth and underserved communities, and a variety of access, equity and inclusion programs. All great things to spend money on, but they’re relatively small amounts of money in small departments, rounding errors in the context of a $5.4 billion city budget.

The big take-away is that there are no “game-changers” in this budget. It’s mostly predictable, incremental spending spread broadly, with the bulk of the new money going to the largest departments.

Despite the booming economy in Seattle and the big problems the city faces such as housing and the homeless crisis, the Mayor’s incremental approach is necessitated by the revenue forecast for the next few years. We’ll dig into that in Part 2.