Today Mayor Ed Murray, City Council President Bruce Harrell, and Council Budget and Finance chair Tim Burgess sent a letter to Wells Fargo backing out of a $100 million bond financing deal because of the recent allegations of illegal business practices at the bank.

Just two days ago, The City of Chicago put on hold its relationship with Wells Fargo for a year, following in the footsteps of California and Illinois.

In addition to one-off financing deals with as this one, Wells Fargo has a contract with the City of Seattle, signed in 2013, to provide general banking services including:

The banking services contract runs through December 2018, with options for 1-year extensions after that. Today’s letter does not say that the city is terminating that contract, nor does it speak to whether it has the right to do so. But it does say:

If we are to consider continuing a relationship in the future, it is essential that you provide us with detailed information about how you intend to rectify this situation, make reparations to those harmed, and ensure something like this never happens again.

I asked Benton Strong, the Mayor’s communications director, whether that meant the city was looking at terminating the contract now or instead looking for Wells Fargo to justify extending it beyond 2018. He didn’t commit to either option being on or off the table, but simply said that the city would like to hear the bank’s response first.

That’s actually a fair response. The $100 million bond financing is a lot of money but it’s just a single transaction, and with the city’s stellar credit rating it will have no problem finding another bank to take it. The general banking services contract is another matter altogether. Here’s the description of the scale of financial transactions that the city does (from the RFP for the banking services contract):

The City deposited over $3 billion through its operating account during the year 2011. The City’s average bi-weekly payroll is approximately $30 million, of which over 90% is direct deposits to the employees’ bank accounts. Employees not enrolled in direct deposit receive paper checks. Payroll is processed bi-weekly for just under 12,000 employees. Retirement is processed on the 1st and 15th for approximately 7,000 retirees. In 2011, the City issued over 150,000 Accounts Payable checks and 2,000 wires for $850 million and $2 billion respectively. The City issues AP checks daily.

And here’s a chart of its banking system as of 2012 (it’s probably more complex now): 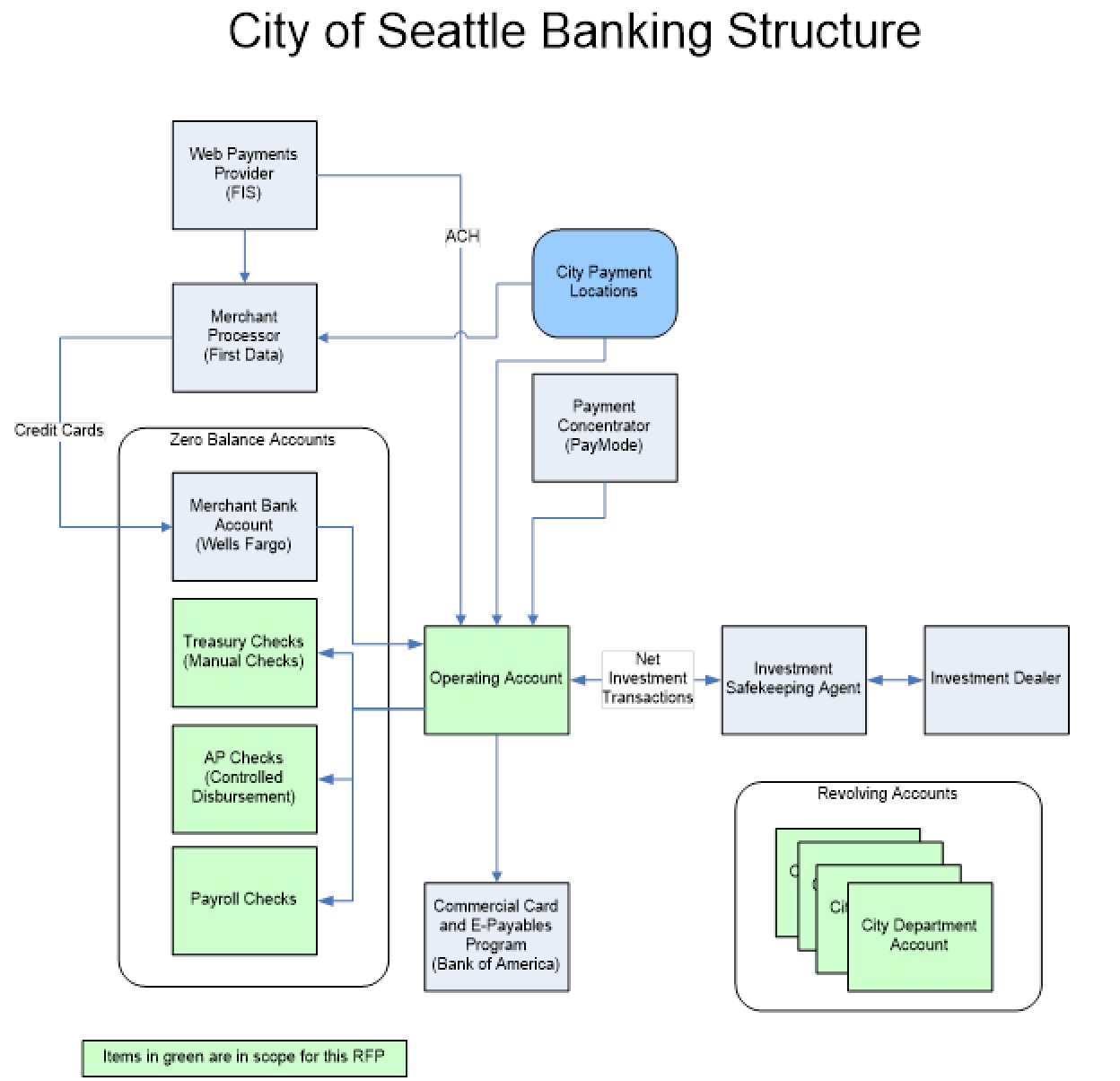 This is not something that you can change quickly or easily; it would take several months to move all that over to a different bank.  And there aren’t many financial institutions that are capable of handling the scale of money and transactions the city does, so even if the city pulled the plug on Wells Fargo now, there is a very short list of other banks they could take their business to. As Strong pointed out to me, you can’t just go down the street to BECU and ask them to take it over.

And that raises a bigger conundrum, that Strong posed to me: where does a city with progressive values find a socially responsible organization to provide banking services at city scale? The city thought it was doing all right with Wells Fargo, as today’s letter explains:

One factor that made Wells Fargo competitive in earning the City’s business was a commitment to socially responsible banking practices by providing services and outreach to all members of our community. Especially important was your work with the Bank On Financial Empowerment Network and support of Express Credit Union in providing financial education and services for low- and middle-income households and the unbanked. While these efforts have been appreciated, the recent allegations have undermined our confidence in Wells Fargo as a trusted partner. Your good faith effort to transparently reform your business practices and make reparations to those harmed will be required to build that trust.

But there simply aren’t large-scale nonprofit banks that can provide the breadth and scale of retail services that a city of 650,000 people requires.

For now, the City of Seattle is joining the choir of voices that are limiting their dealings with Wells Fargo. Whether it takes the drastic step of cutting its ties entirely is still to be seen, but the ball is in the bank’s court to address its crimes and try to repair both its image and its relationships with customers.

Update: (thanks to former Mayor Mike McGinn and other on Twitter for helpful pointers)

State law places limits on the banks that cities such as Seattle must use for their banking services. It says that local governments must use an in-state bank (though exceptions can be made).  It also says this:

In English: Seattle can’t use any bank where the city’s daily deposits would be more than half of the bank’s total daily deposits. Roughly speaking, that’s about $8 million  ($3 billion annual deposits divided by 365 days).

And then there’s this proposal for a Washington State bank.