You’d think the budget for a medium-large city’s police department would be complicated. Think again. 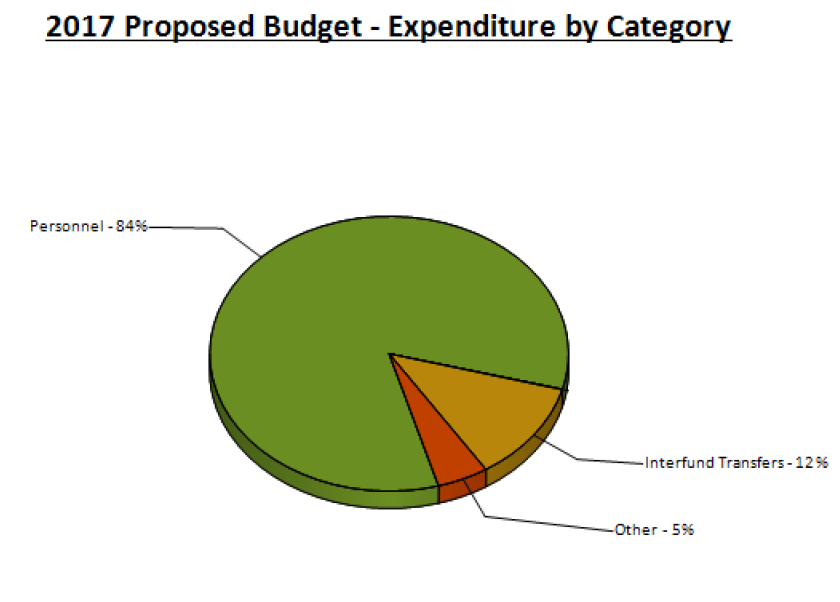 SPD’s proposed 2017 operations budget is $320.9 million dollars. 84% percent of that — $269 million — is personnel expenses for their planned 2,095 employees.  To a first approximation, a police department is a bunch of people.

Ok, that’s a pretty big oversimplification. SPD is also part of the city’s Capital Improvement Plan, which is where the buildings, the vehicles, and some other big assets are. But those are all dealt with separately, partly because the money comes from different sources.

In their plan for the next two years, SPD has eight notable new investments that account for most of the 7% increase from 2016:

Community outreach. The department plans to spend $377,000 on expanding its community outreach starting next year. This will involve hiring two more Crime Prevention Coordinators, bringing the total to five — one for each precinct. They also plan to continue on with a community engagement position created earlier this year based on a recommendation from the Chinatown-International District task force.

Body-worn cameras. SPD has been running a pilot project to deploy a small number of body-worn cameras, but they are ready to ramp the program up. There is $1.8 million in the 2016 budget, frozen by the Council, but SPD is about to ask them to release it. On top of that, they are asking for an additional $4.6 million next year.

An acoustic gunshot locator system (ACLS). These systems have become popular in a number of cites. The early versions didn’t live up to their expectations, but apparently they have approved. The federal government is funding a one-year pilot in Seattle that goes live this year, but after the year if Seattle wants to continue use of it, SPD will need to start covering the costs — or the Feds will likely rip it out. The department is asking for $50,000 for that.

The data analytics platform. So far, the department has spent $9.5 million to build out a new data analytics platform. This will help it collect and analyze information critical to the success of the police reform efforts underway, by allowing supervisors and watchdog organizations see deeper into patterns of bias, use of force, terry stops, and other issues of concern. They are asking for $1.9 million in 2017 and another $1.3 million in 2018 to drag the department into the 21st century.

Public disclosure and parking enforcement staff. SPD reports that it received 7,000 public disclosure requests in 2015, an increase of 67% since 2010. And the rollout of body-worn cameras will increase both the number of complexity of requests. SPD is asking to hire two more people to help handle the load.  They also want to ad one more parking enforcement officer, as part of SDOT’s plan to extend paid parking hours in some hours of Capitol Hill.

Overtime costs. As the Council has discussed frequently, SPD is notorious for overrunning its overtime budget — both because it under-budgets, and because it has not had management discipline to control it. SPD is working to fix both parts: their new scheduling system, paired with the data analytics platform, will give them a better view on their overtime budget. And they are also increasing the overtime budget line, by both adding new funds and transferring some from other accounts.

Yesterday the Council’s budget committee met to review SPD’s budget ask, and it quickly became clear that the police department continues to have a deficit of trust with both the community and the Council.  And for good reasons: the consent decree, the North Precinct fiasco, their use of blast balls during protests, ongoing incidents of police inappropriate use of force, and budget mismanagement. O’Toole and her team are trying to turn the ship around, but between their own mistakes and the huge deficit they have created, they simply aren’t making much progress.

Several Council members hammered them to justify these new expenses Juarez drilled on the body-worn cameras, and the department’s efforts to diversify its corps of sworn officers. Gonzalez, whose committee provides oversight of SPD pushed hard on the data analytics platform, the lack of a community engagement process on the body-worn cameras. Burgess pushed for the acoustic gunshot locator system to have a real evaluation before the city bought into it.

But Sawant was the one who came in ready to pick a fight, and almost entirely for items that weren’t part of the budget discussion. Her first target was blast balls. Her staff had peppered SPD with requests for information in advance: an inventory of the department’s store of blast balls and other “less lethal” items, as well as a list of the lawsuits related to them. Sawant pressed them as to whether they intend to keep using them. O’Toole responded by saying that she hopes they never have to deploy them, but they don’t intend to take them out of use. She did say, though, that the department has significantly increased the amount of time training on their use, with an internationally-recognized expert who she would happy to bring to Gonzalez’s committee to brief the Council. “It’s complicated business but we’re trying to be on the leading edge in terms of our policies, our procedures, our training, and the equipment we use,” O’Toole said. Her COO, Brian Maxey, reminded Sawant that the department scrutinizes every use of force and has implemented every recommendation of the OPA and the force review board.

Sawant moved on to her next battle: the North Precinct police station. Despite the fact that the station was on the agenda for another meeting later in the day (and Budget committee chair Burgess reminded her of this), she saw her opportunity with O’Toole at the table and forced her to justify the project. In a fairly masterful move, O’Toole deflected it: she pointed out that the project was hatched back in 1999 and the Council and Mayor had approved it many times, so when she arrived she said “well if this is what the Council and city wants, then we’re moving full speed ahead.” She noted that the project had obviously taken a different turn recently and said that she was fine with that. “I work for the Mayor and the people of the city. If the people have changed their minds, so be it.” She then went on to stress the importance of a comprehensive facilities plan not just for SPD but for every city department, and observed that Seattle is the only major city she knows that does not have a state-of-the-art training facility.

O’Toole then took it even further, briefing the Council on some recent decisions that reshape the North Precinct organization. She explained that they are splitting the North Precinct staff into two commands: North and Northeast. This decision was driven by the fact that 40% of the city’s population is in the North Precinct, and 70 of the Mayor’s 200 new officers will go end up there. For the moment the plan is to keep those two commands co-located in the same building, but that decision could be revisited as part of the ongoing discussion of how to take the North Precinct project forward.

As O’Toole wrapped up, largely taking the air out of Sawant’s sails, Juarez jumped in to finish the job. Barely concealing her anger and saying “I like to deal with facts and history,” she rattled off statistics on the project: it was put in front of the Council twelve times and approved twelve times, five of the Council members at the table voted four times to approve it, and it covers three Council districts with just a single police station. “None of us ever looked at this thing and said  ‘this is awesome — let’s spend $160 million’… This is about the practicality of capital improvements. This is what you call the essential government function, when you build a hospital, a school, a reservoir, roads. If we were to criticize every brick and mortar thing we build in this city we would never get anything done.” She promised to take up the fight again when the North Precinct project came up in the later discussion of the Capital Improvement plan.

Later Sawant brought up another non-budget-related issue: the recent report that SPD licensed a social-media monitoring system called “babel street” to help it search through public social media feeds to scout for threats. An article in the Stranger argued that it violated the city’s laws against purchasing surveillance systems. I’ll spare you the play-by-play; Sawant asked many good questions, the best ones around why SPD seems to be so tone-deaf about their need to be transparent in order to regain trust. O’Toole and Maxey managed to argue that what they did wasn’t illegal, but came off as defensive and confused at times and didn’t gain much sympathy from the Council members other than Burgess. But Gonzalez spoke to her desire to take up the hard work of revising the ordinance in her committee next year.

As with the other budget discussions in this first round, this one was about clarifying details and raising concerns, not making decisions. The police department’s big budget request is for additional staff, and it’s clear Sawant is assembling her case against that — as well as rallying her troops to fight it in the court of public opinion.  At this point SPD’s poor credibility has left it with few  devoted supporters on the Council, though its ongoing efforts to fulfill the consent decree should move related budget items through and individual Council members seem willing to be flag-bearers for specific line-items.  Despite the fact that the overall change in the police operations budget is fairly small, it looks to create a generous amount of heat before the ink dries on the 2017-2018 budget.