Wednesday afternoon, the Council’s Human Services and Public Health Committee was briefed by the Mayor’s office on the short-term steps being taken to address the homeless crisis.

Within the city government, this is being referred to as “Bridging the Gap,” the interim response plan while the larger, long-term “Pathways Home” plan is vetted and implemented over the next 18 months. The Bridging the Gap plan emerged late last year as the Mayor’s compromise to stop the Council from trying to advance an ordinance (or two) dictating the protocol for dealing with unsanctioned encampments. It has four main components: 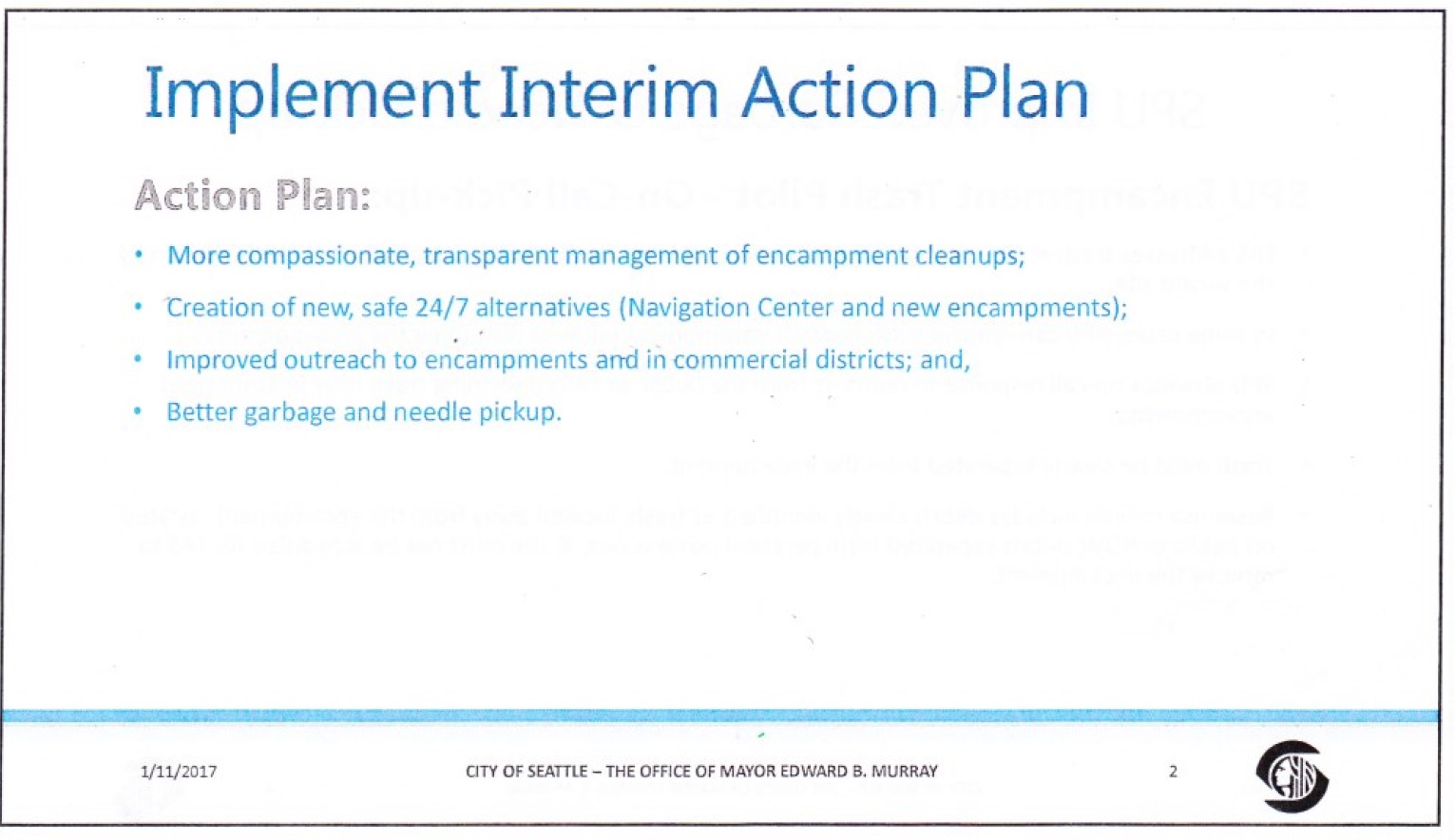 Some of the more straightforward components, such as making shower facilities available and picking up trash and needles, have been proceeding quickly; other more complicated pieces have been bogged down in logistics and bureaucracy. Last month when the Mayor’s office briefed the Council for the first time, they ran out of time before they could fully describe the work being done on garbage and needle cleanup, so they began with that topic this time.

Ken Snipes from Seattle Public Utilities (SPU) explained that they have been working through the logistics and protocols for picking up garbage, either at scheduled times and locations or on-call, at unsanctioned encampments. With the help of outreach teams, they have figured out how to designate pickup locations that are outside the encampments, for the protection of both encampment residents and SPU workers but also to prevent SPU from accidentally removing personal belongings. They plan to expand the number of scheduled pickup locations from the current 3 pilot sites to an additional 3-4. Also, Seattle residents who see trash accumulating on public property can report it at (206) 684-CITY, using the Find-it-Fix-it mobile app, or on the SPU web site. 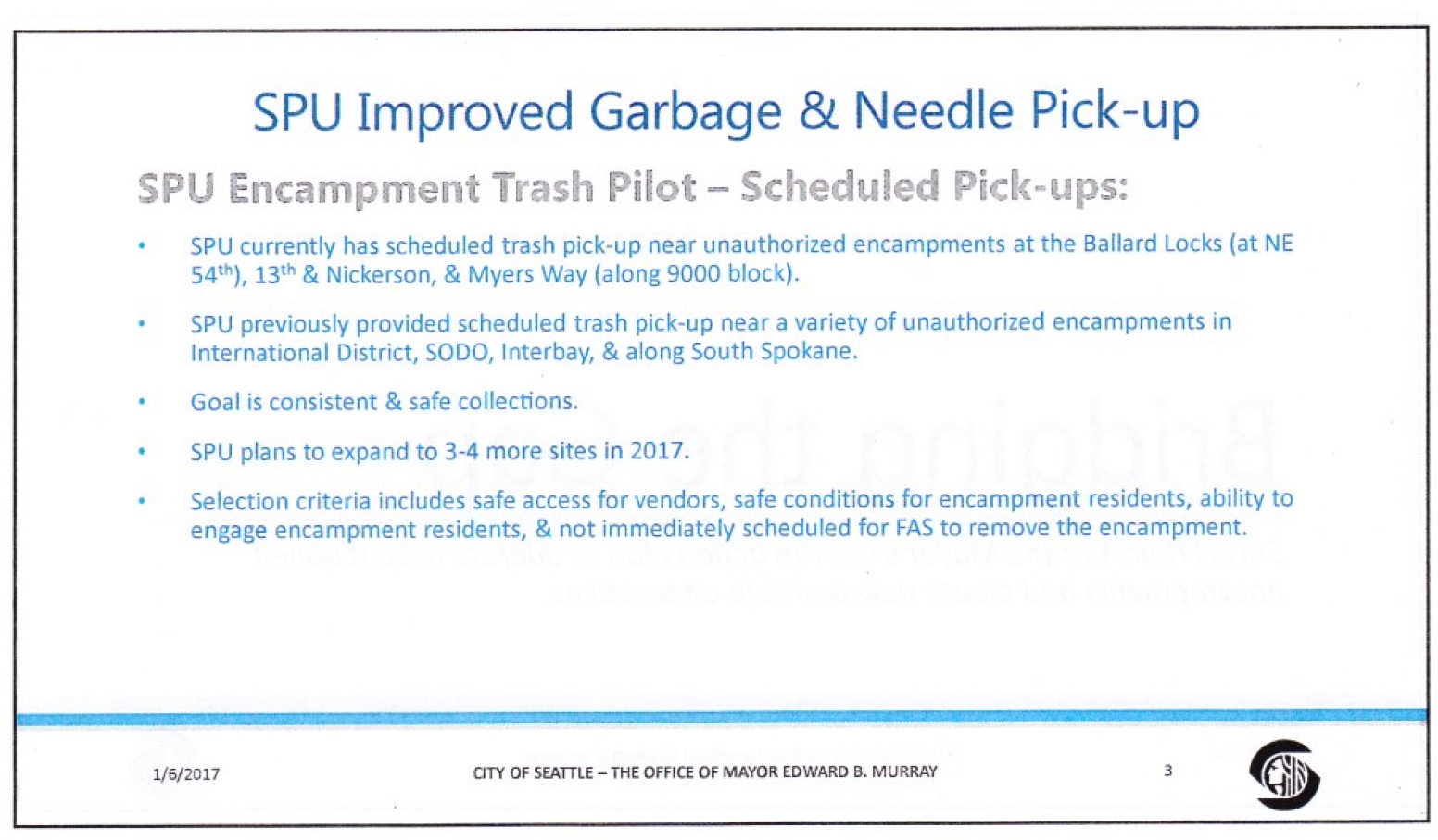 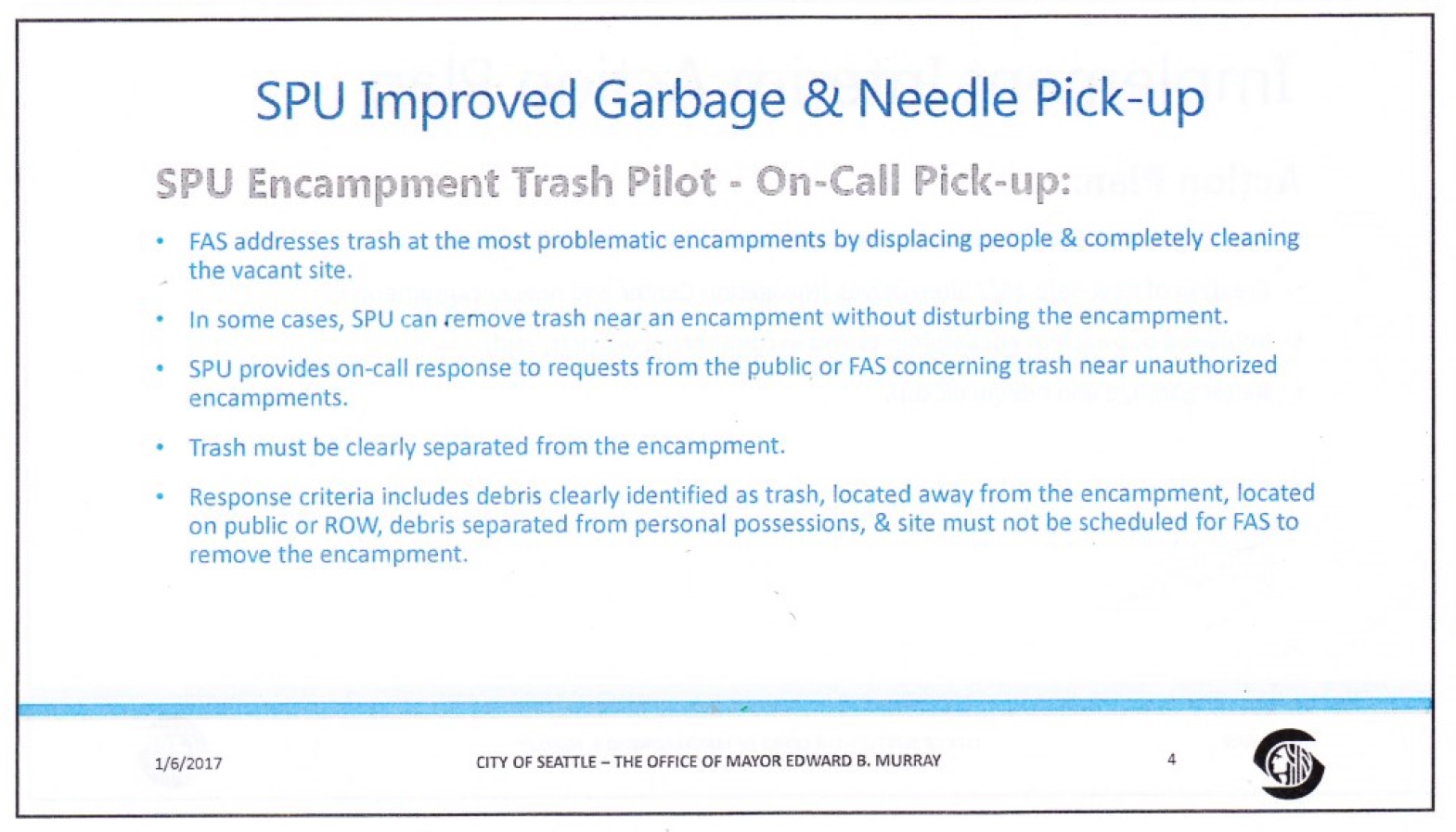 SPU has also been running a litter abatement project in three pilot sites: the Chinatown/International District, Little Saigon, and Ballard — all places with large homeless populations camping in the area. They say the response from the neighborhoods has been very positive as people have witnessed SPU’s commitment to making a real difference in those places. They plan to add four more neighborhoods with chronic litter problems in 2017.

There are, however, some locations where trash is accumulating, particularly around and under I-5, that are actually WSDOT property, and SPU is still trying to negotiate access to those sites to clean them up. Council member Burgess showed little patience for that, pointing out that if they are within Seattle city limits then the city should issue citations to WSDOT to force them to clean them up (or to allow SPU to in a timely manner). 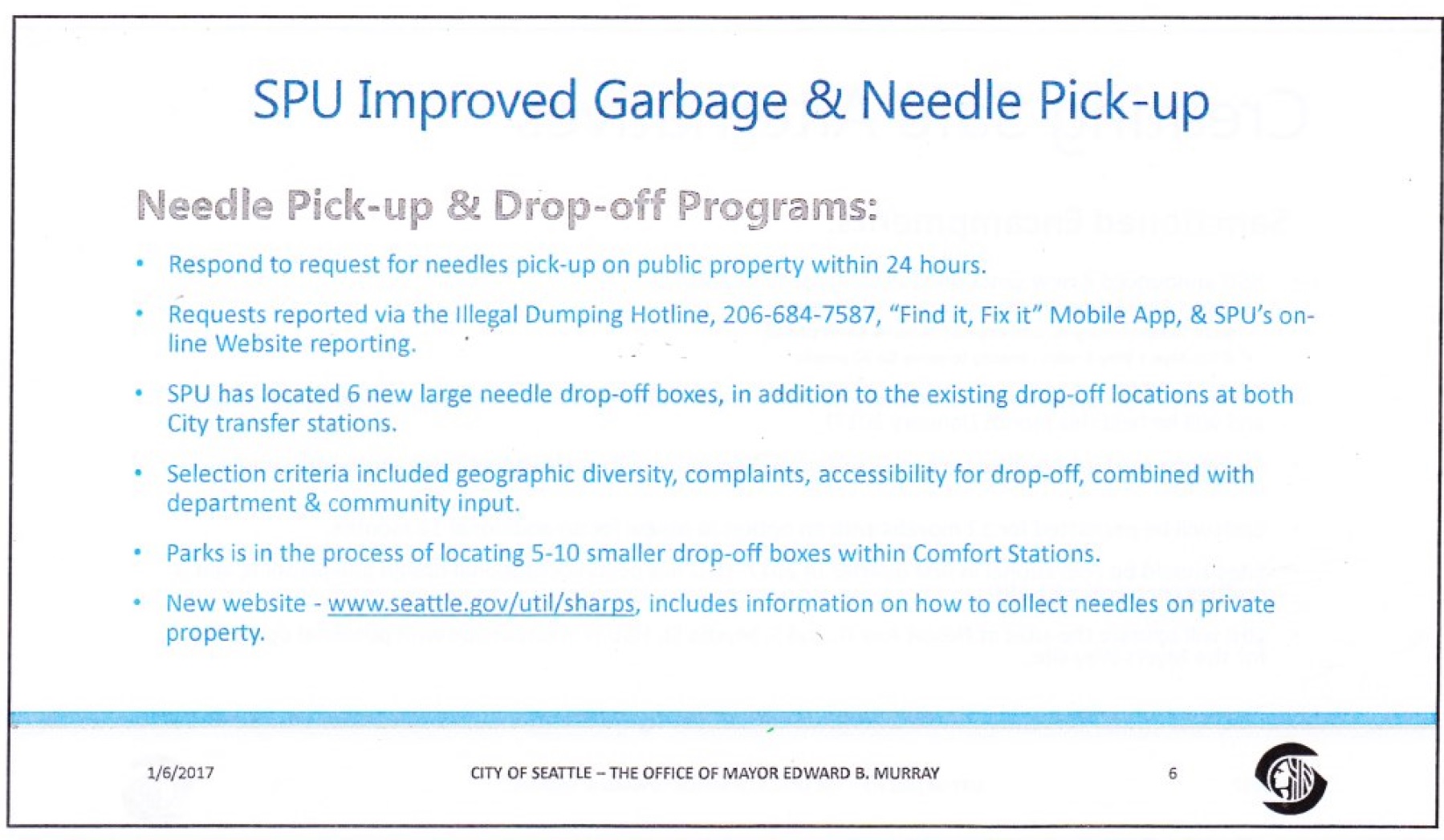 A multi-departmental effort has been working on needle cleanup. They have been receiving reports of public spaces that need needle cleanup from various sources, and the city has been trying their best to respond within 24 hours. In addition, six new large drop-off boxes have been deployed in key areas, and additional ones in the city’s two transfer stations. Parks and Recreation is also installing 5-10 boxes in park comfort stations.  The city received 188 complaints in 2016, and estimates they cleaned up around 1800 needles (so many, in fact, that the newly-deployed drop-off boxes are filling up regularly and they are switching to estimating collection counts by weight instead of trying to individually count needles).  The city has launched a new web site with information on the needle drop-off points, how to request cleanups on public property, and proper procedures for cleaning up needles on private property.

Jason Johnson, Deputy Director of the Human Services Department, provided an update on the new Navigation Center, which was supposed to have launched by the end of December. He reported that site selection is still “in the works,” but that he hopes to have an update soon. He gave no sense of the timeline for moving it forward. He did say, though, that in the meantime HSD has been working with providers to offer a form of “pop up” services along the lines of what the Navigation Center is intended to provide so that critical services can be brought to people who need them. 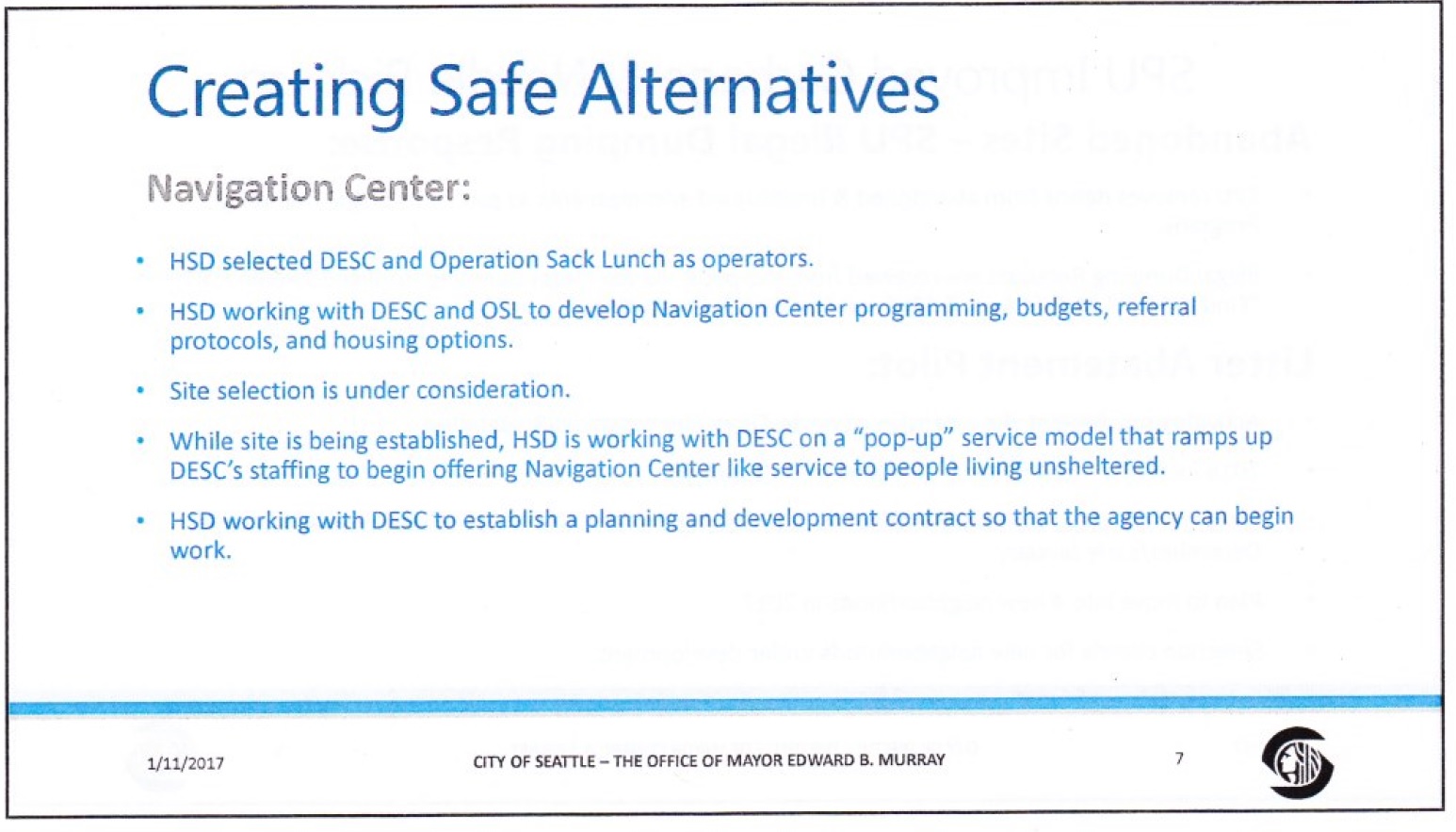 Johnson also updated the Council on the three new sanctioned encampment sites in planning (they are still struggling to find a site for a fourth).  They are very busy with neighborhood outreach, listening to community members’ concerns and preparing responses. George Scarola, the Mayor’s director of homelessness response, explained that public safety issues are their top priority, and that for many people in the community the new encampments are not the issue: it’s what’s already happening in their community. They are attempting to leverage people from the advisory committees of the existing sanctioned encampments to speak to the communities where the new ones are proposed, to help reassure them that sanctioned encampments wont’ exacerbate problems. But Scarola acknowledged that often it’s difficult to “tease out” the impact of the people residing in a sanctioned encampment from that of the homeless people living nearby. 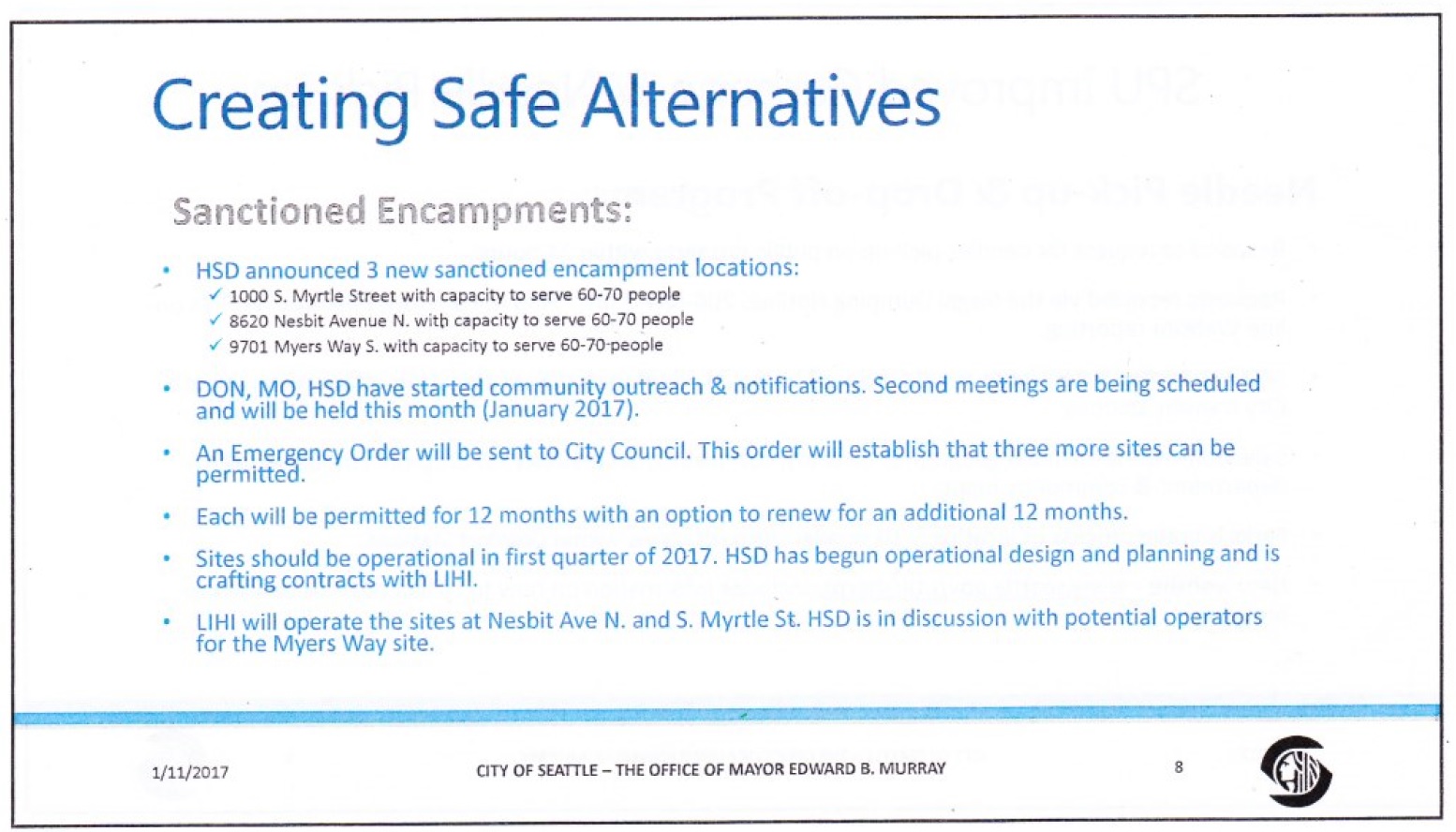 Johnson noted that the Mayor would be issuing an emergency order, under the authority granted him by the State of Emergency, to allow three more encampments to be permitted. Under city law, the Council may affirm the emergency order, reject it, or do nothing.

Johnson also gave an update on the RFP “all call” for new, creative proposals for adding shelter capacity. Proposals are due back by January 20th. There is $1.3 million of funding available, and he said that they are looking at many proposals, “some very creative.” 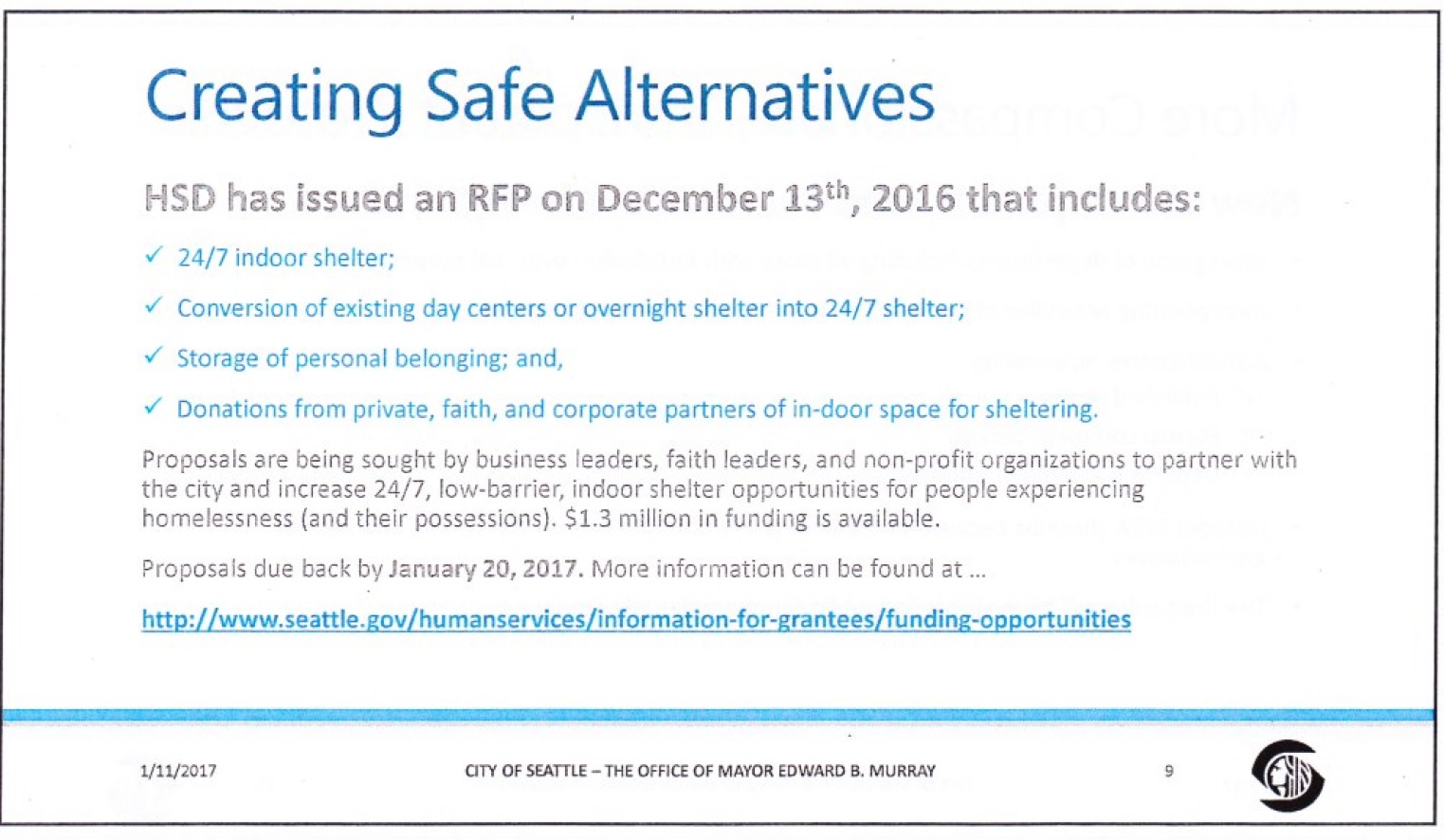 Scarola gave an update, with statistics, on the efforts to make park and community center shower facilities available to the homeless. The Green Lake facilities are very popular, and they estimate that they served around 1000 people in December alone. Also, Seattle Public Schools has been making passes to the city’ public swimming pools available (through nonprofit service providers) to homeless families with children enrolled in the city’s public schools so that they can clean up in the shower facilities there. 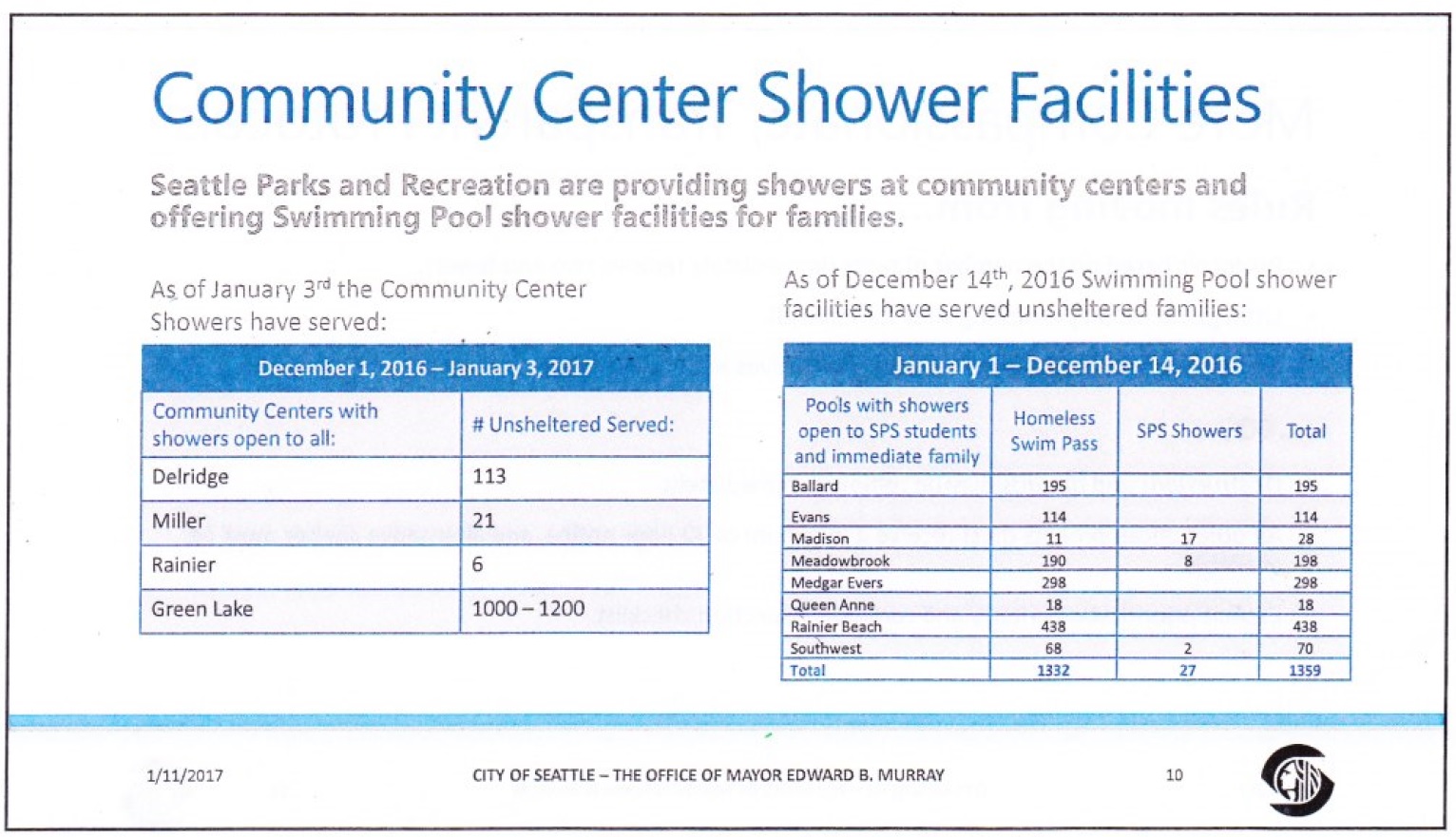 Then the discussion turned to an update on the controversial protocols for cleaning up unsanctioned encampments. For once, it was a fairly calm discussion, even if there was far more promises than visible progress. Chris Potter from FAS explained that an inter-departmental task force has drafted a new set of rules to govern encampment cleanup, and that draft is being circulated internally for review before being released for a public comment process. Once the draft is released, Potter explained, the comment period will be at least two full weeks. In addition, the city’s legal department has advised them that the impact of encampment cleanup on the human and natural environment is significant enough that they need to complete the state SEPA checklist as part of their review process, so that bureaucratic step is in the works. At least give them credit for trying to do it right, even if it is taking a maddeningly long time. 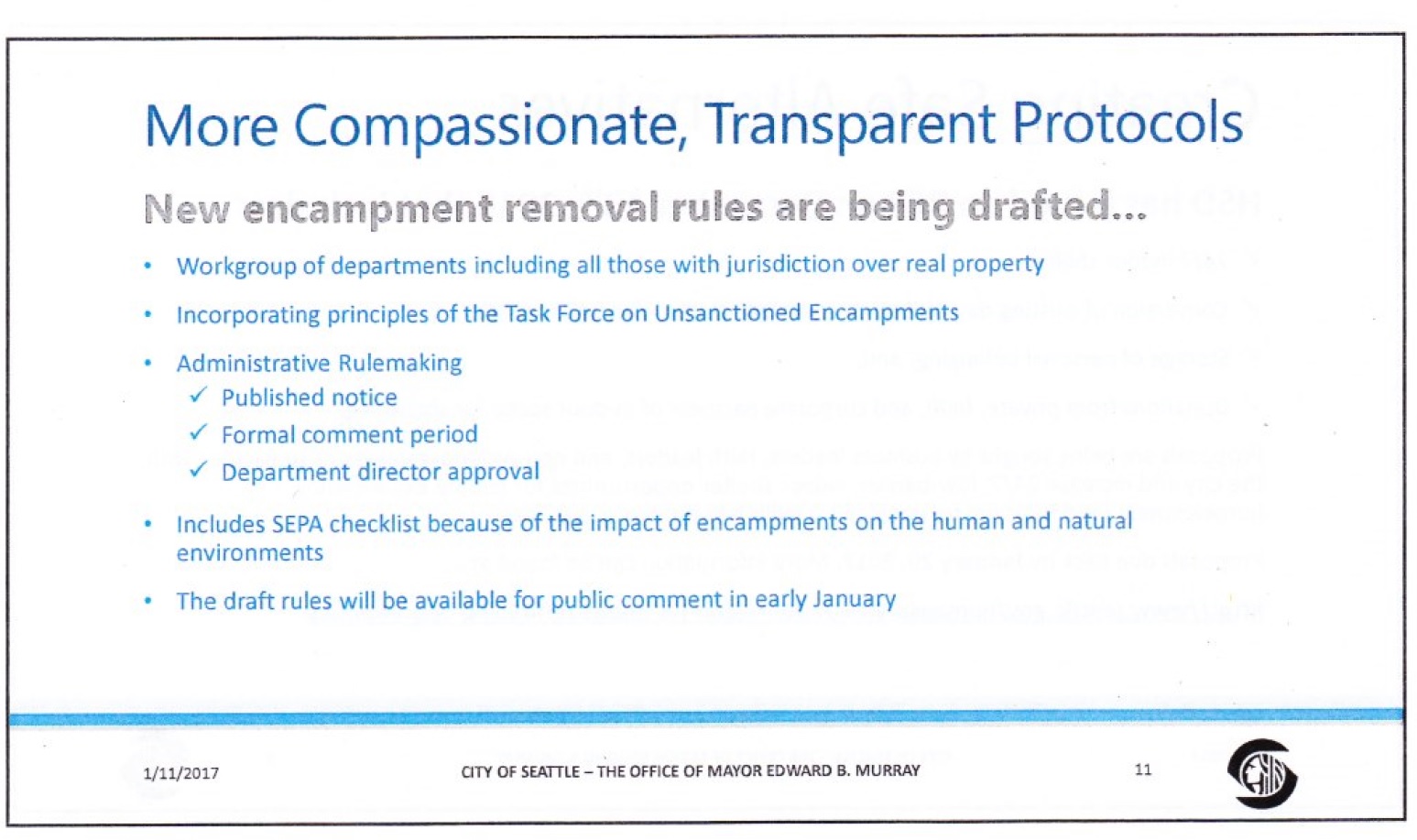 Potter also noted that the old MDAR rules discuss the size of encampments, but say nothing else about how to prioritize encampments for removal, so they are trying to address that omission in the new rules. Their proposal, in line with the Mayor’s agreement with the Council last year, distinguishes between encampments that are a hazard or obstruction and all other ones. Encampments that are not a hazard or obstruction will always have at least 72 hours notice before removal, and the occupants will be offered an alternative location — though the precise alternative will be personalized to the needs and preferences of each individual occupant. 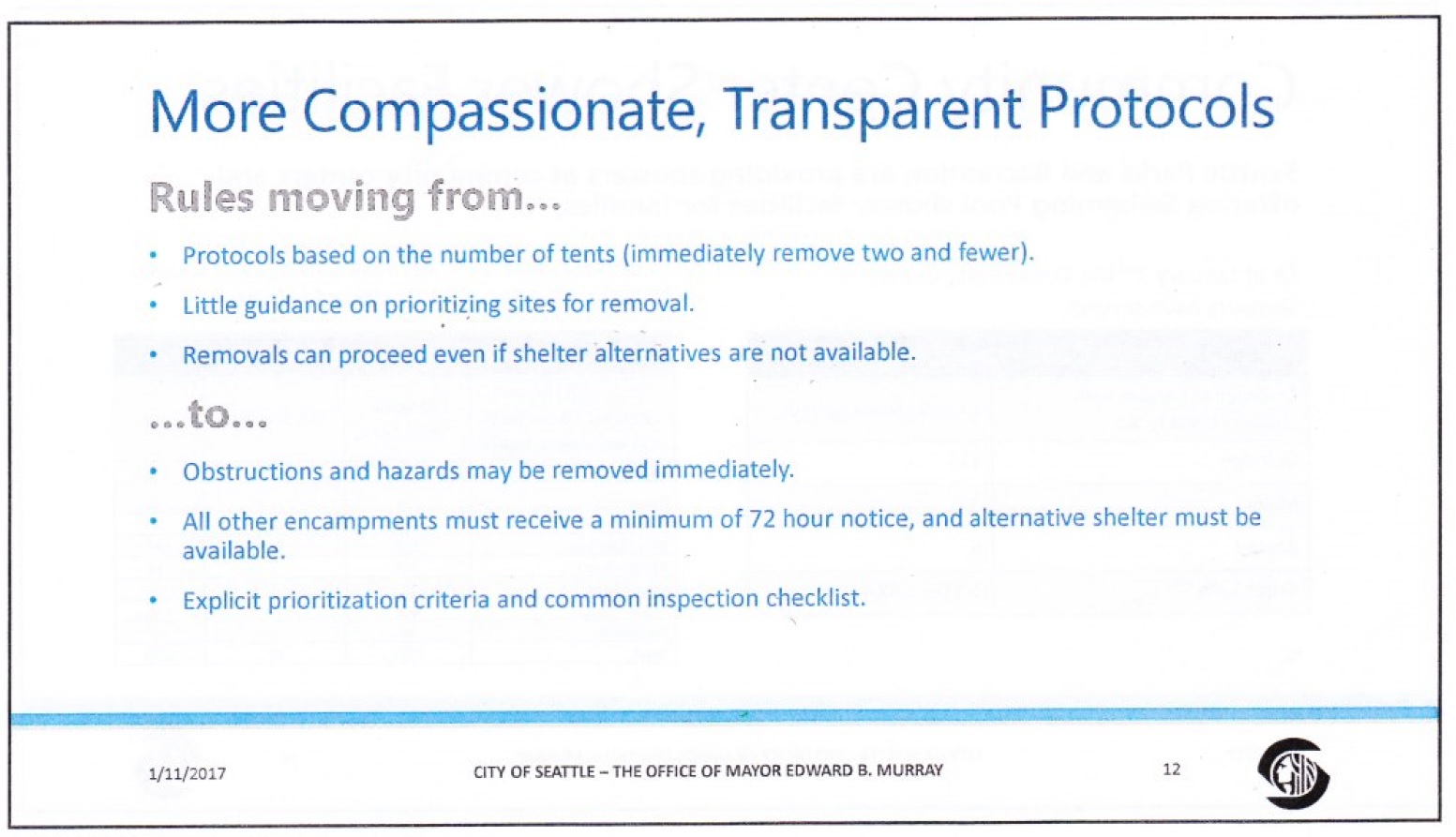 Potter said that public release of the draft rules is “imminent.” He said in the meantime they are working on the new external website where all cleanups will be fully documented, including “site journals” intended to show before/after pictures of each site and report on outcomes for the occupants of the site.

Last month it was reported that the Office of Civil Rights would no longer be monitoring cleanup work. After pushback, Potter reported on Wednesday that there is a new “agreement in concept” that SOCR will monitor the work in an “audit capacity,” wherein it has access to all information and from time to time will directly monitor cleanups.  Bagshaw seemed satisfied with the compromise, though O’Brien wanted more details on the nature of the audit capacity — particularly whether OCR would have the authority and independence to call out mistakes and problems when they occur despite being under the authority of the Mayor. 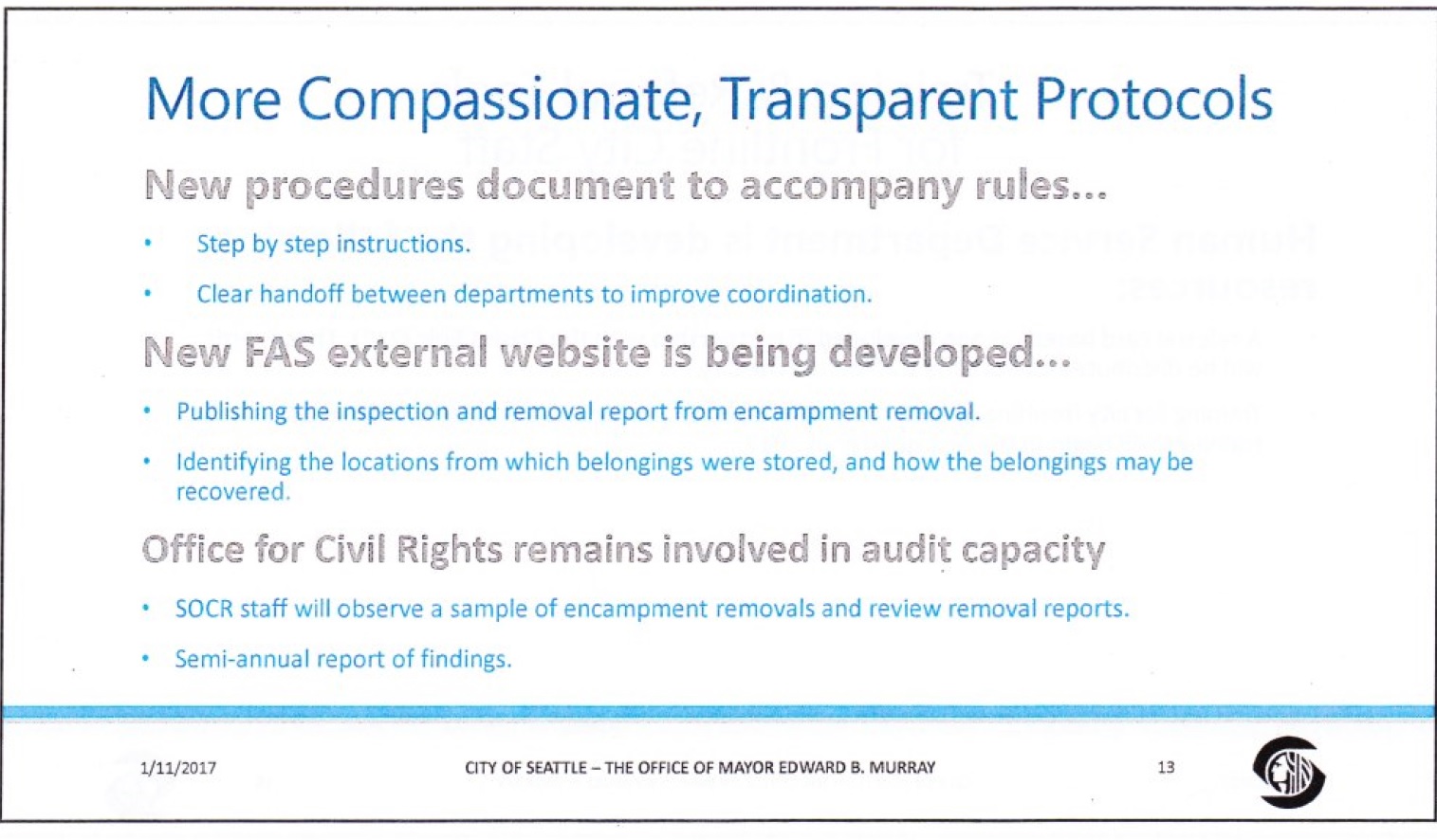 Johnson gave an update on outreach, which was simply a promise to return on January 25th with recommendations from the committee (run by All Home) that has been reviewing outreach protocols. He also explained that they are creating a new multi-disciplinary outreach team that will be able to refer individuals and groups into the Navigation Center. 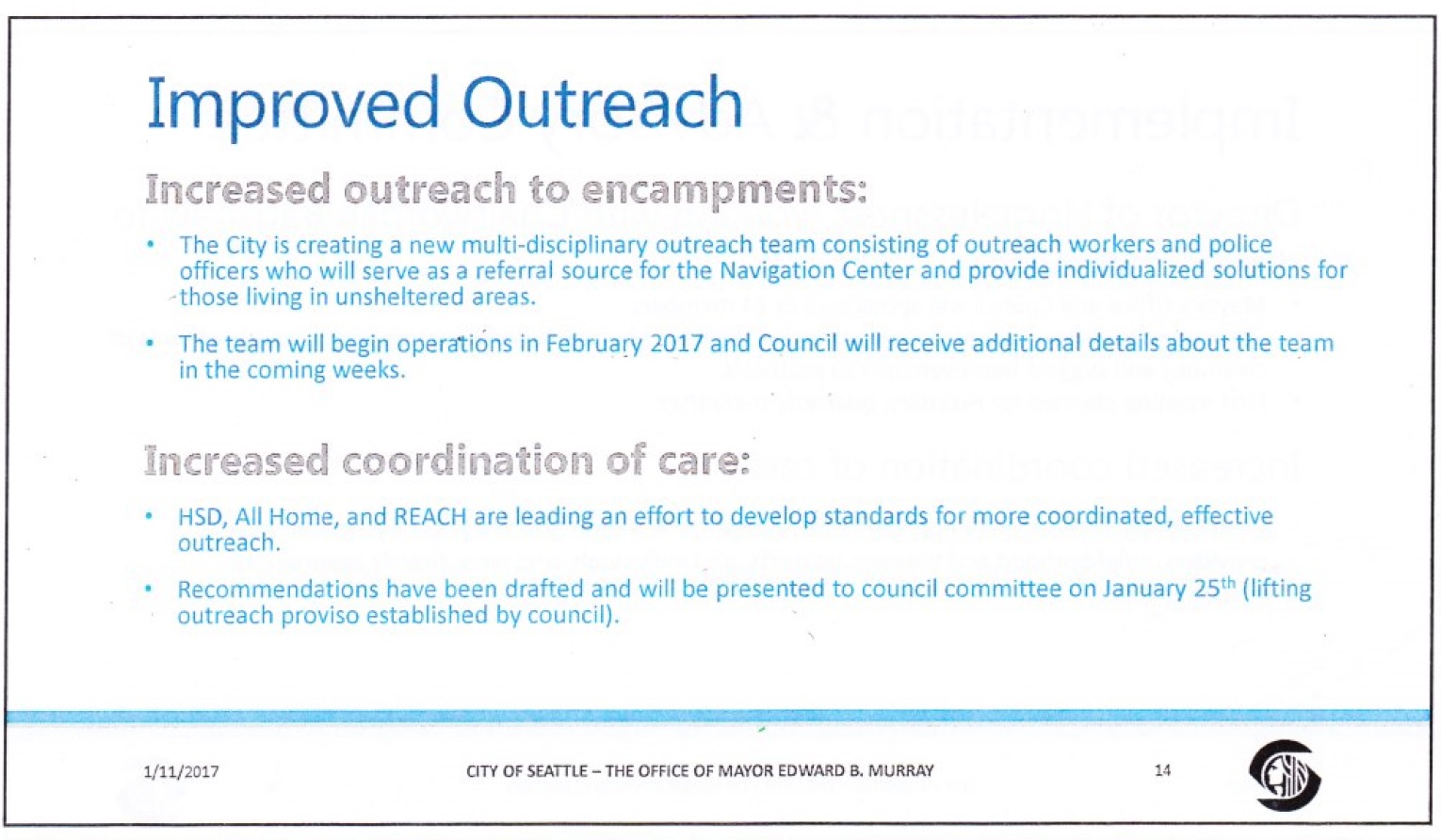 Johnson noted that training for front-line city staff (mostly in Parks and Recreation) is ongoing. 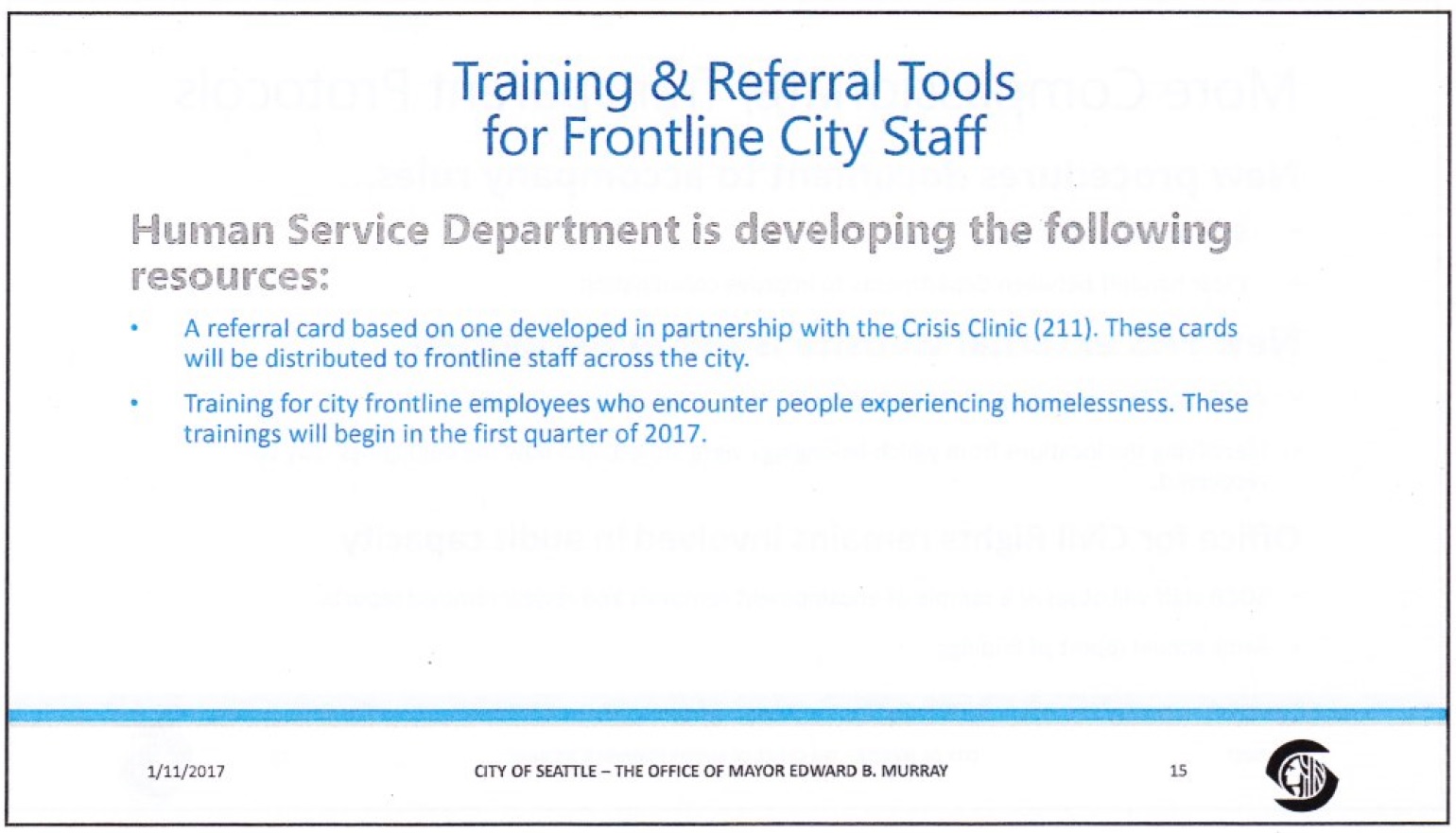 Scarola updated the Council on the plan for the Mayor’s promised Implementation and Advisory Committee, which he and Bagshaw have been discussing. It will likely have 14 members, 7 appointed by the Mayor and 7 by the City Council. He hopes to schedule their first meeting in February, though he and Bagshaw have differing views on how often they should meet after that. 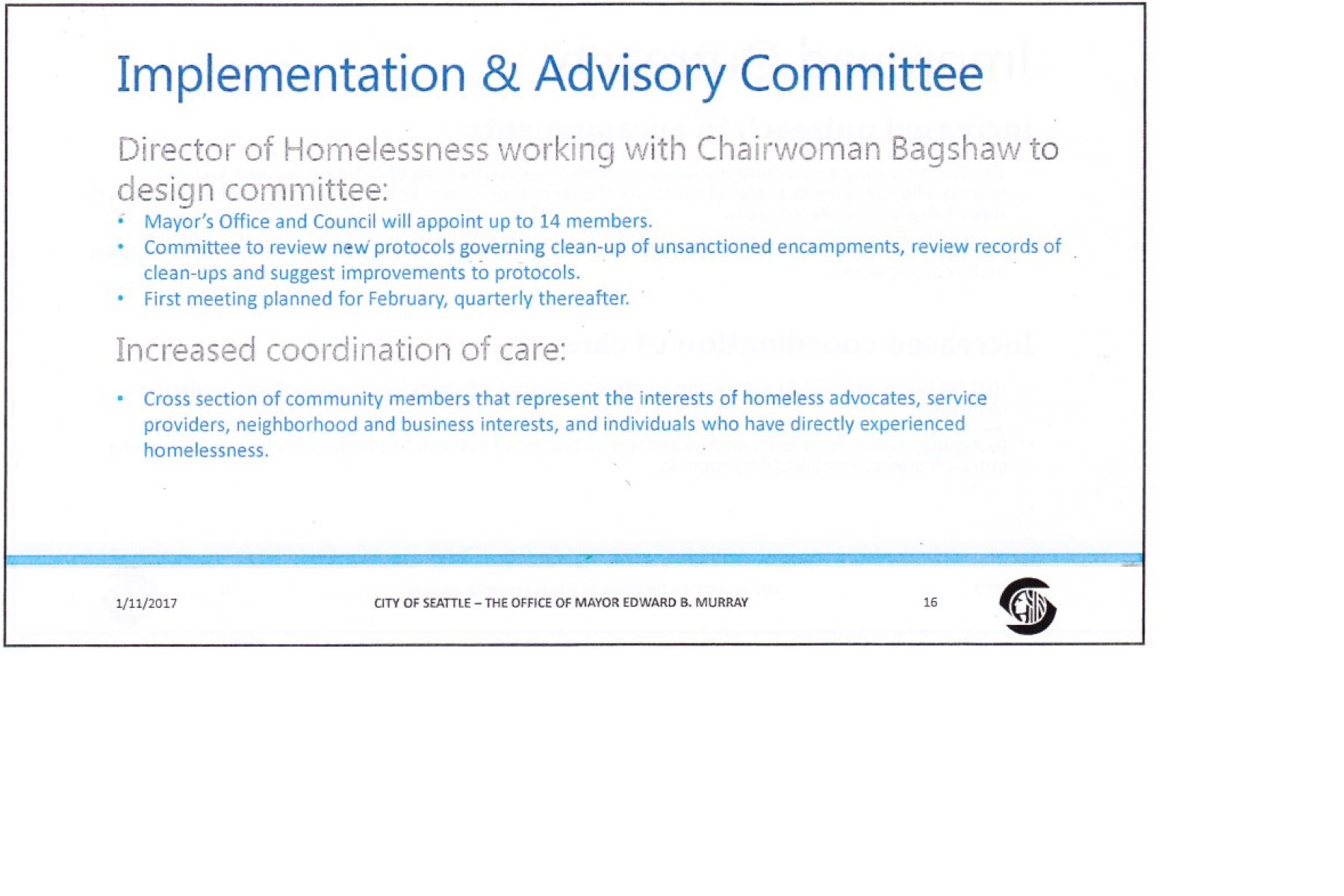 Despite the number of items that are behind schedule and the ones that are still just promises, Bagshaw, Burgess and O’Brien were appreciative of the progress that has been made and recognized the complexity of the effort. While conciliatory, O’Brien did stress the urgency of moving forward, particularly around garbage pickup.

Later this month, Scarola and the Mayor’s team expect to provide another briefing on Bridging the Gap, as well as a deeper conversation about the long-term Pathways Home effort.