It was a State of the City address by Mayor Ed Murray, so there was the customary lofty rhetoric, celebration of the past year’s successes, grumbling about things that didn’t go his way, and pointed barbs aimed at the Trump administration. But there were also a handful of announcements, so let’s cut to the chase.

In an unexpected move, Murray announced that he is activating the city’s Emergency Operations Center — typically reserved for major weather and natural disasters — to help with coordinating the city’s response to the homeless crisis and “bring urgency and focus to the humanitarian crisis that is happening in our city.” In a press release explaining the move, his office explains that the move is “temporary” yet “open-ended”  (as is the State of Emergency he declared in November 2015), and intended to help with three main goals:

This is a curious move for two reasons. First, it’s a tacit admission that the city is struggling to coordinate its work across departments — something that Murray rarely makes. Second, it raises questions about the role of George Scarola, Murray’s hand-picked Director of Homelessness and the person who is supposed to be coordinating the response across departments.

Murray also admitted that while he originally had declared the state of emergency in order to attract funding assistance from state and federal agencies, it’s now clear that was unrealistic: “We are on our own.” He wants to add an additional $55 million annually to the city’s budget for addressing homelessness through a new property tax that he will aim to have on the August ballot for voters to approve. His office calculates that it will cost the average household $13 per month. The money will be spent on mental health and substance abuse treatment, as well as on more housing. Murray also challenged the business community to raise $25 million to focus on innovations to get more homeless people into housing.

Murray also announced an “action plan” around education. It’s a difficult subject for the Mayor and city government, since Seattle Public Schools is a completely independent branch of government that Murray and the City Council have no control over, so they must console themselves with a scattered set of investments that nibble around the edges of deep-rooted quality and equity problems in the school system. The Mayor’s action plan pulls together several existing investments, along with some new ones around the theme of “eliminating educational disparities”: 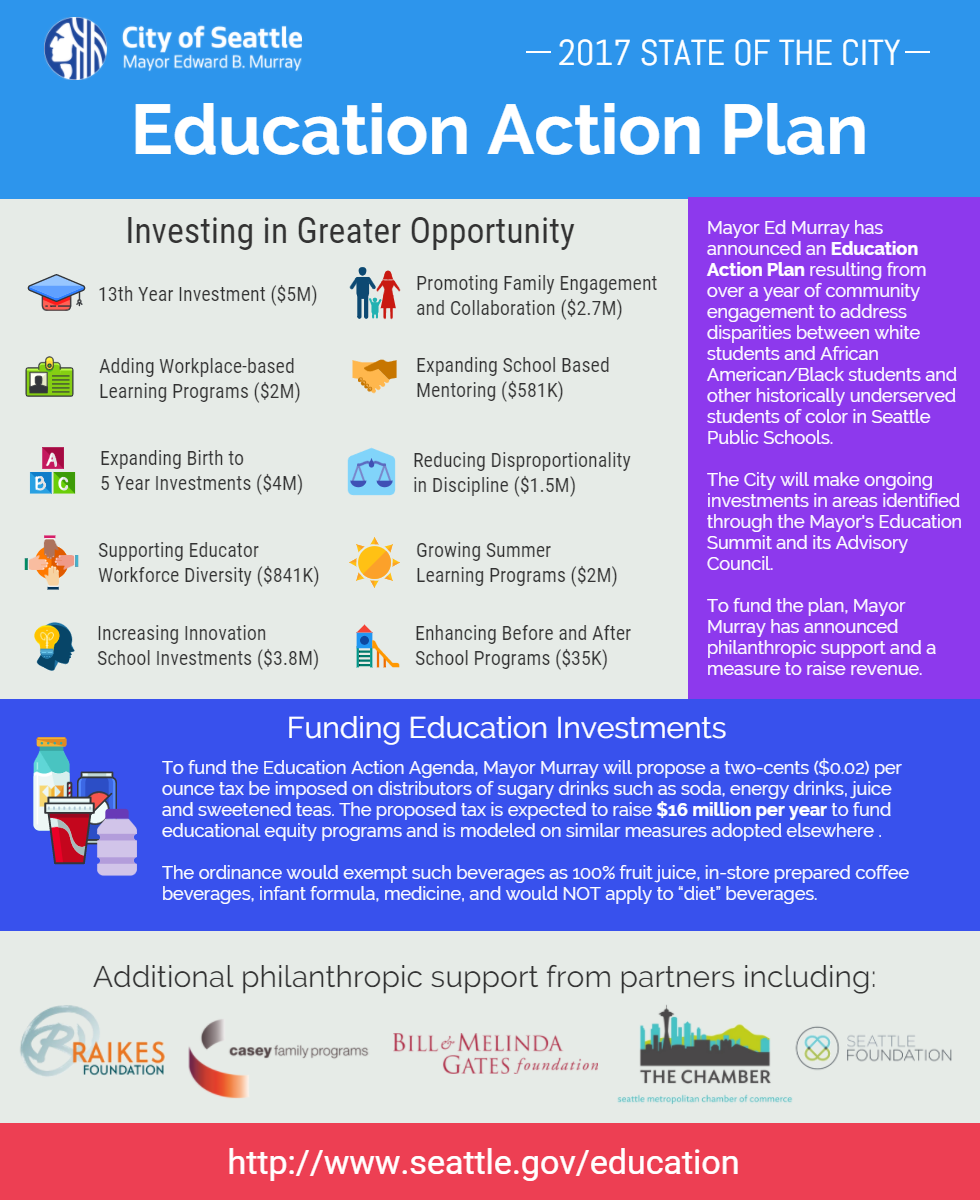 To fund these programs, Murray is proposing a new 2-cents-per-ounce tax on sugary beverages. But experts generally agree that taxes on sugared beverages are regressive: this will end up being a tax on poor people to pay for programs for poor people.

Murray announced another new umbrella program called “Our Best: Seattle’s Commitment to Young Black Men,” aimed at improving outcomes for black men aged 14-24. This too is a bit of repackaging of existing programs such as CareerBridge, diversion, and zero youth detention, along with a new mentoring and training effort with a goal to double the number of black men who are mentors in Seattle.

The Mayor recapped the existing investments the city is making in creating and preserving affordable housing, and stressed his commitment to the MHA program and its accompanying rezoning that will go through the legislative process over the next 12-18 months.

And finally, as was fitting to the setting of his speech at Idris Mosque, Murray spoke about the city’s defiant stance against the Trump administration’s immigration policies. He recommitted to Seattle’s position as a welcoming city. He noted that he would be hosting a summit of mayors on the topic, and called on the City Council to approve a “sister city” relationship with Mexico City to affirm Seattle’s welcoming views towards our neighbors to the south. Murray also announced that today the city was sending Freedom of Information Act (FOIA) requests to the U.S. Department of Homeland Security, Immigration and Customs Enforcement, and The Department of Justice in order to gather information to understand the practical implications of Trump’s immigration-related executive orders.

A few things went notably unmentioned. The first was Murray’s  “good governance” and open data initiative that he introduced last year in his State of the City address. And while he mentioned that voters had recently passed levies to fund transportation (including bus service expansion, Move Seattle and Sound Transit 3) he didn’t speak specifically to any new transportation initiatives. He mentioned the massive jobs growth and the low unemployment rate, but made no other mention of the business community other than to ask them for money. He made no reference to the North Precinct police station, nor to the controversial Juvenile Justice Center. Murray spoke at length about police accountability and reform, but left out one of his signature points: hiring more police officers.

If Murray and his staff follow through on everything in this morning’s speech, it will be a busy year for the Mayor’s office. And a difficult year: both another property tax levy and the sugared drink sales tax will be challenging to sell. By opening the Emergency Operations Center he has doubled down on the State of Emergency and his commitment to making progress on the homelessness issue as his administration begins to roll out Pathways Home, but he is also running out of excuses for the lack of visible progress in the face of a considerable amount of money being poured into the effort.  At the same time, he knows his audience: open defiance of Trump buys him goodwill, which I am sure he hopes he can convert into patience as he tries to make progress on affordable housing and homelessness.

The full text of Murray’s speech is here, and you can watch him deliver it here.