With the MHA rezone for the University District now behind them, the City Council has turned its attention to the next candidate in line: the Downtown/SLU area.

The first discussion in the Planning, Land Use and Zoning Committee was a brief one, geared more towards summarizing the word the city has done to-date on the proposal and laying out the plan for the weeks to come.

The stakes are high for this part of the MHA rezone: downtown and SLU are expected to produce at least 2100 units of affordable housing, over a third of the total generated by the MHA program. 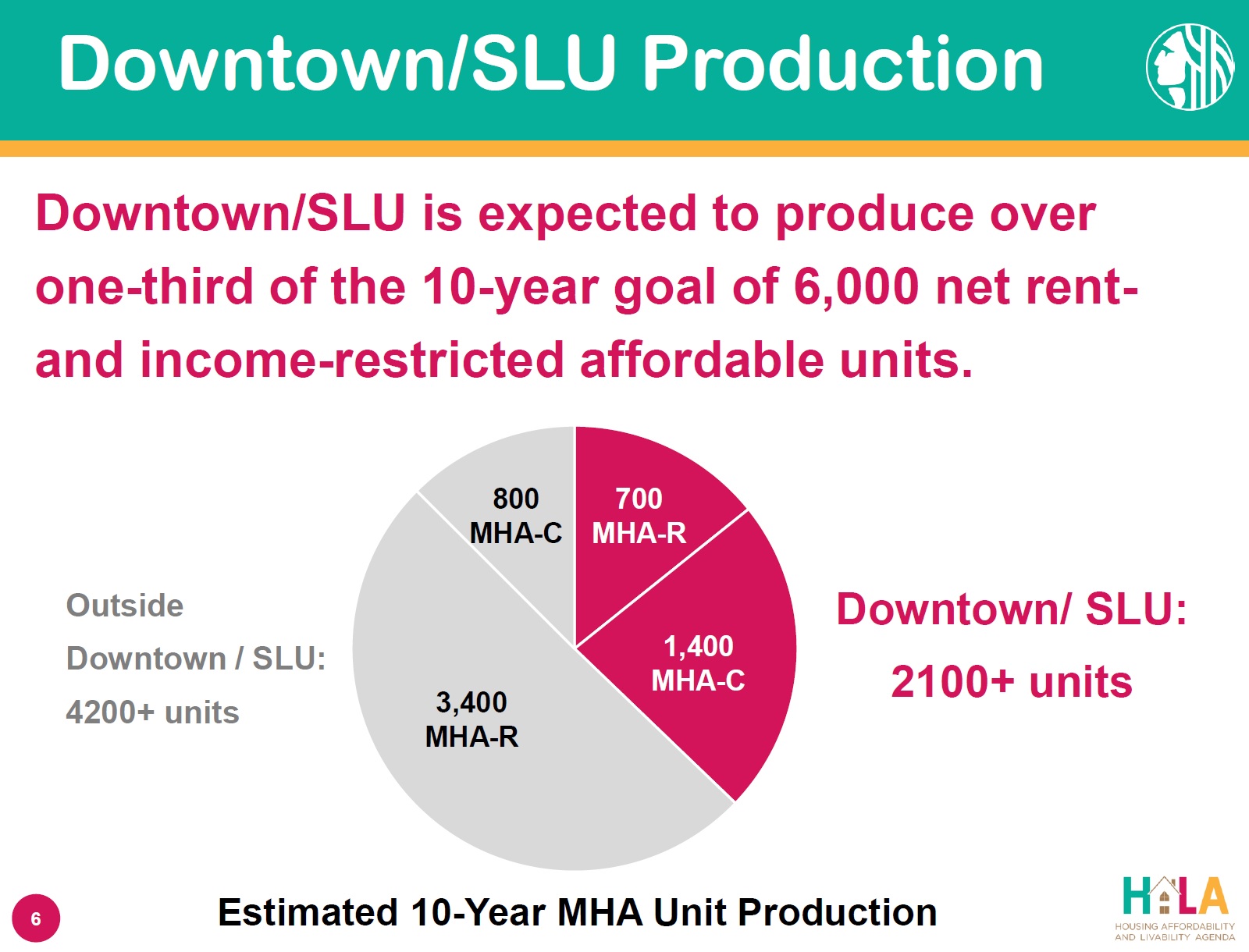 But the details in this area will differ somewhat from the U District, because the context is different. It’s already zoned for density (with a few exceptions), and there is already an Incentive Zoning program in place that raises zoning limits in exchange for a small amount of affordable housing (based on the additional development capacity granted, not the whole building) and some other public benefits. 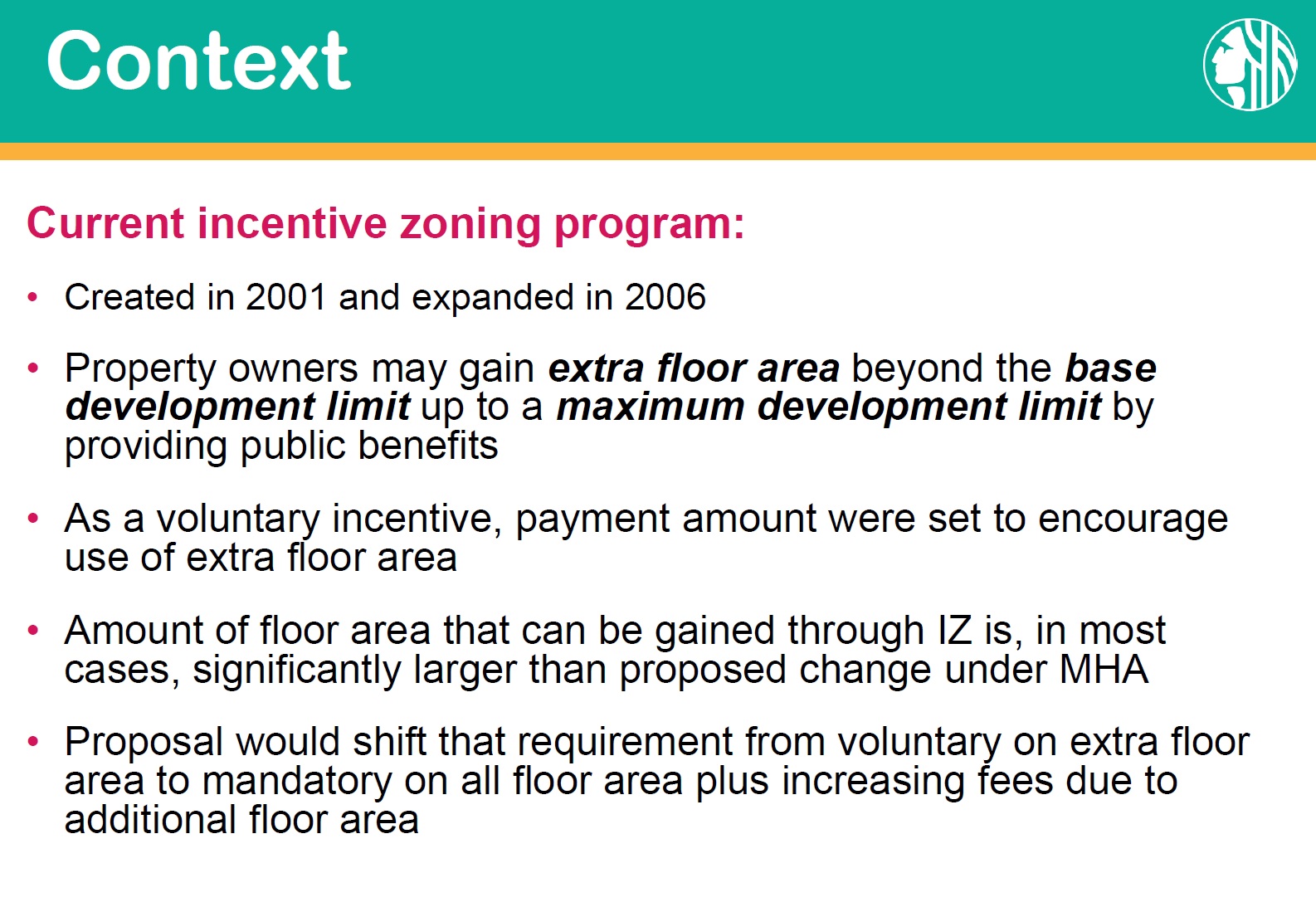 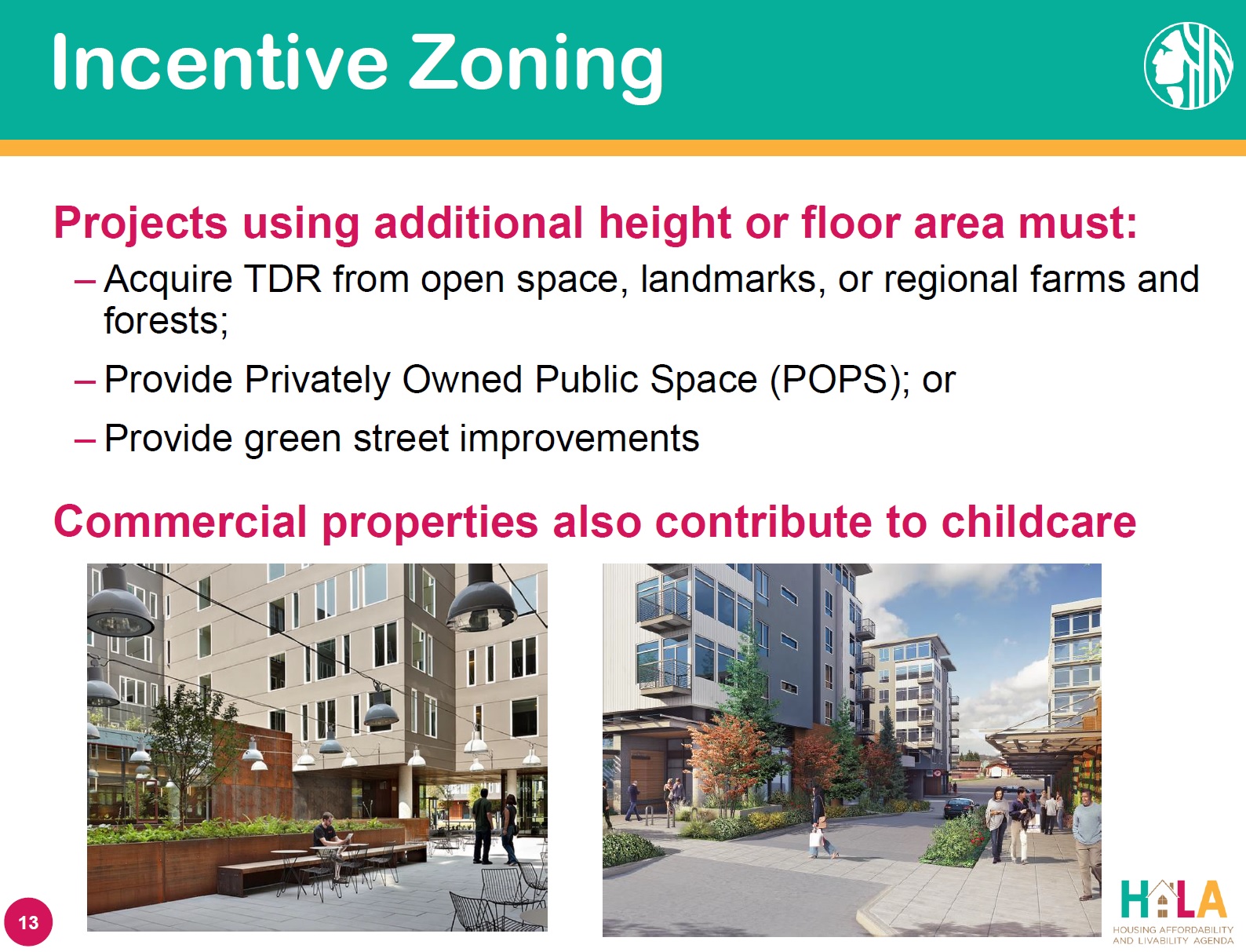 The MHA program would layer on top of this: developers would need to satisfy both the MHA and IZ programs.

Because it’s largely a highrise zone, the zoning grants from the MHA program look a little different. Currently buildings in commercial zones downtown are not constrained by height limits, but by limits on total floor area, so MHA would increase the floor area allowed. In residential zones, most buildings would get additional height; but there is one type of downtown residential zone that currently has no height limit and buildings in that zone would get an additional 1000 square feet instead. 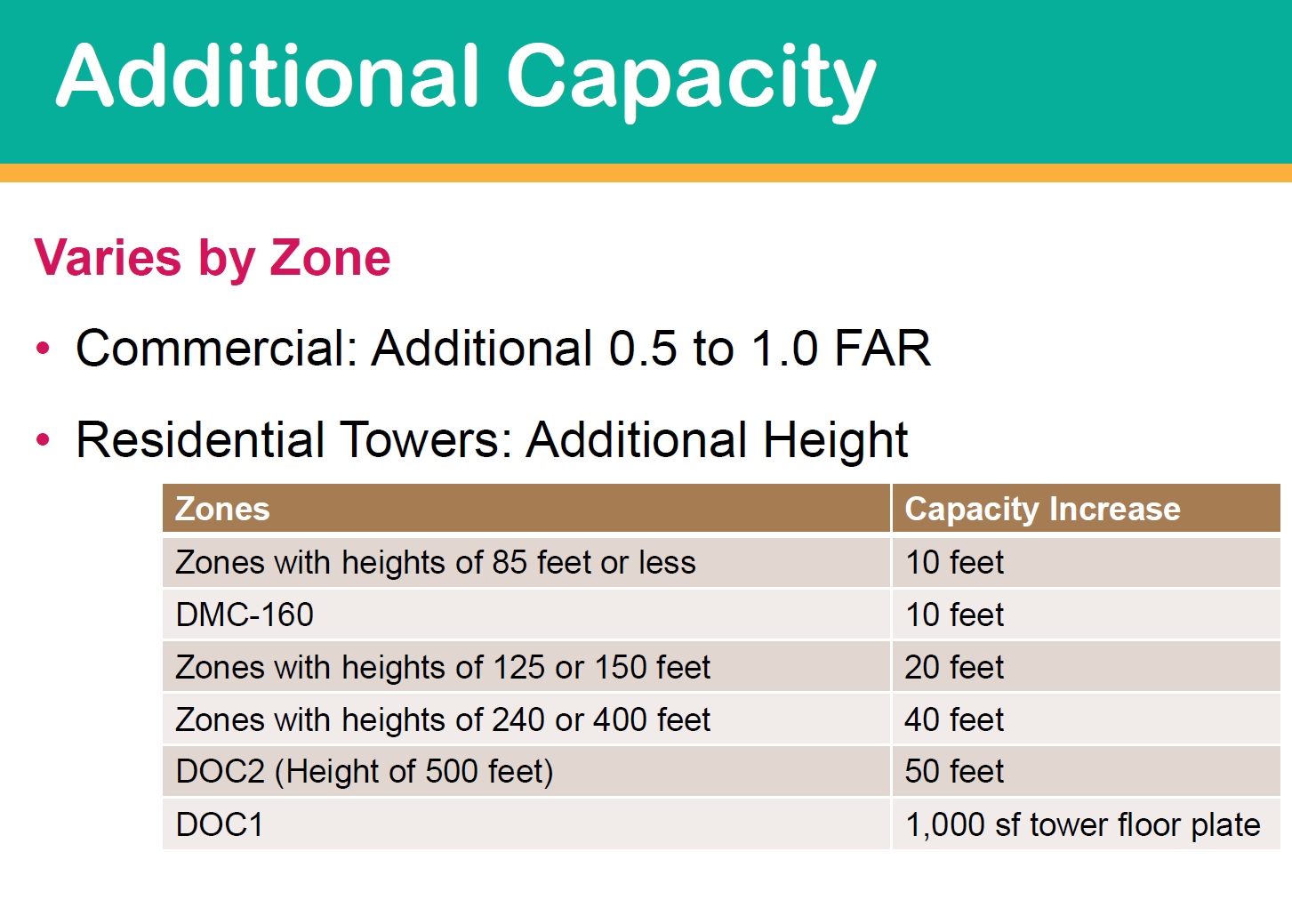 Highrise construction is expensive, and that limits the MHA requirements for set-asides/payments that can be required without making development infeasible. However, it’s also high volume, so even a relatively low set-aside percentage (or payment $/square foot) can generate a large amount of affordable housing units. 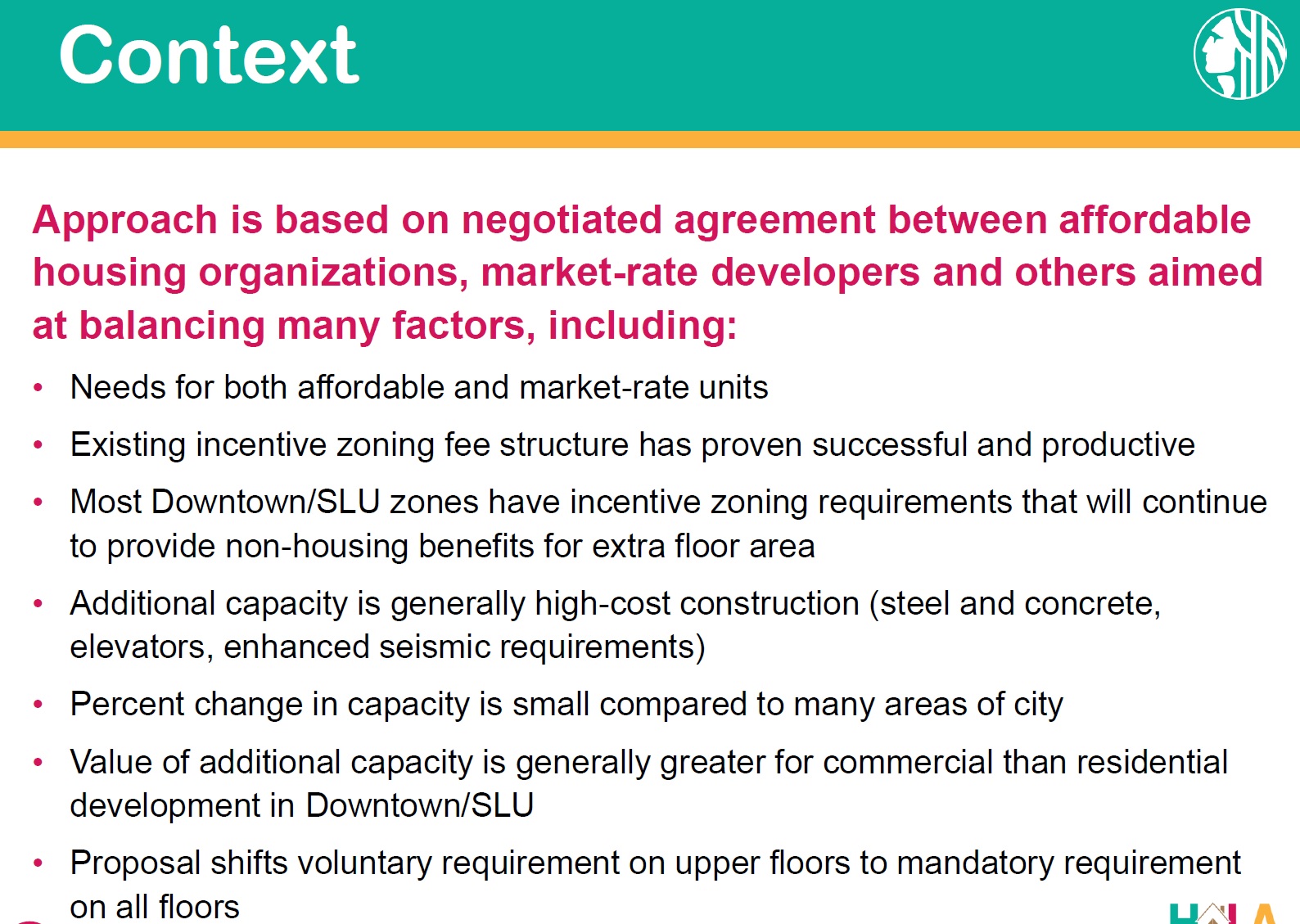 The city has already done fairly extensive outreach to the community to understand its interests and concerns. Residents expressed a preference for taller and thinner buildings, in order to preserve views and open spaces and to maximize the amount of sunlight making it all the way to the ground. 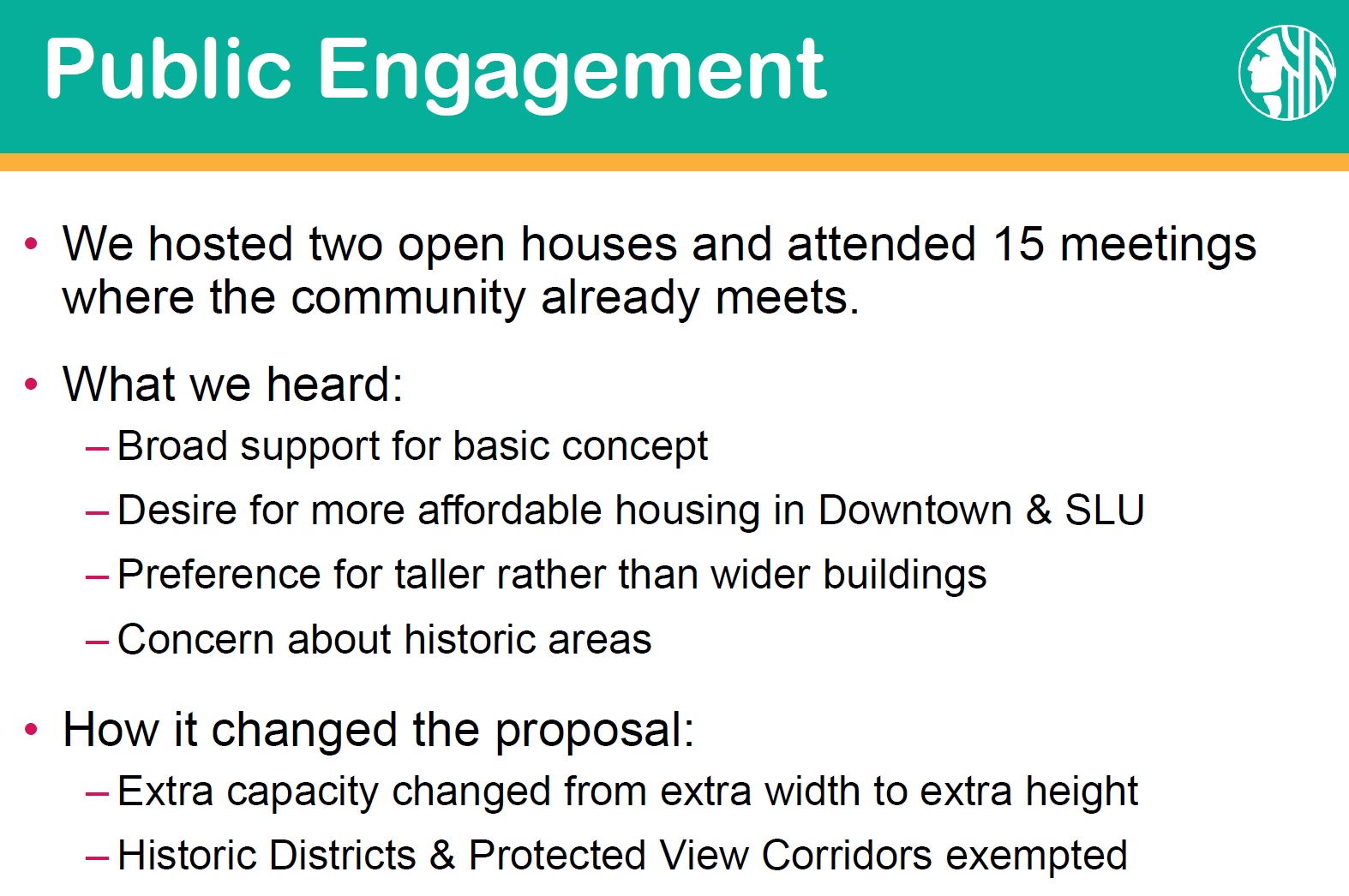 The city also heard from residents that preserving historic districts is important, so the rezone excludes some more sensitive areas:

Also, the Chinatown/International District area will be handled separately. 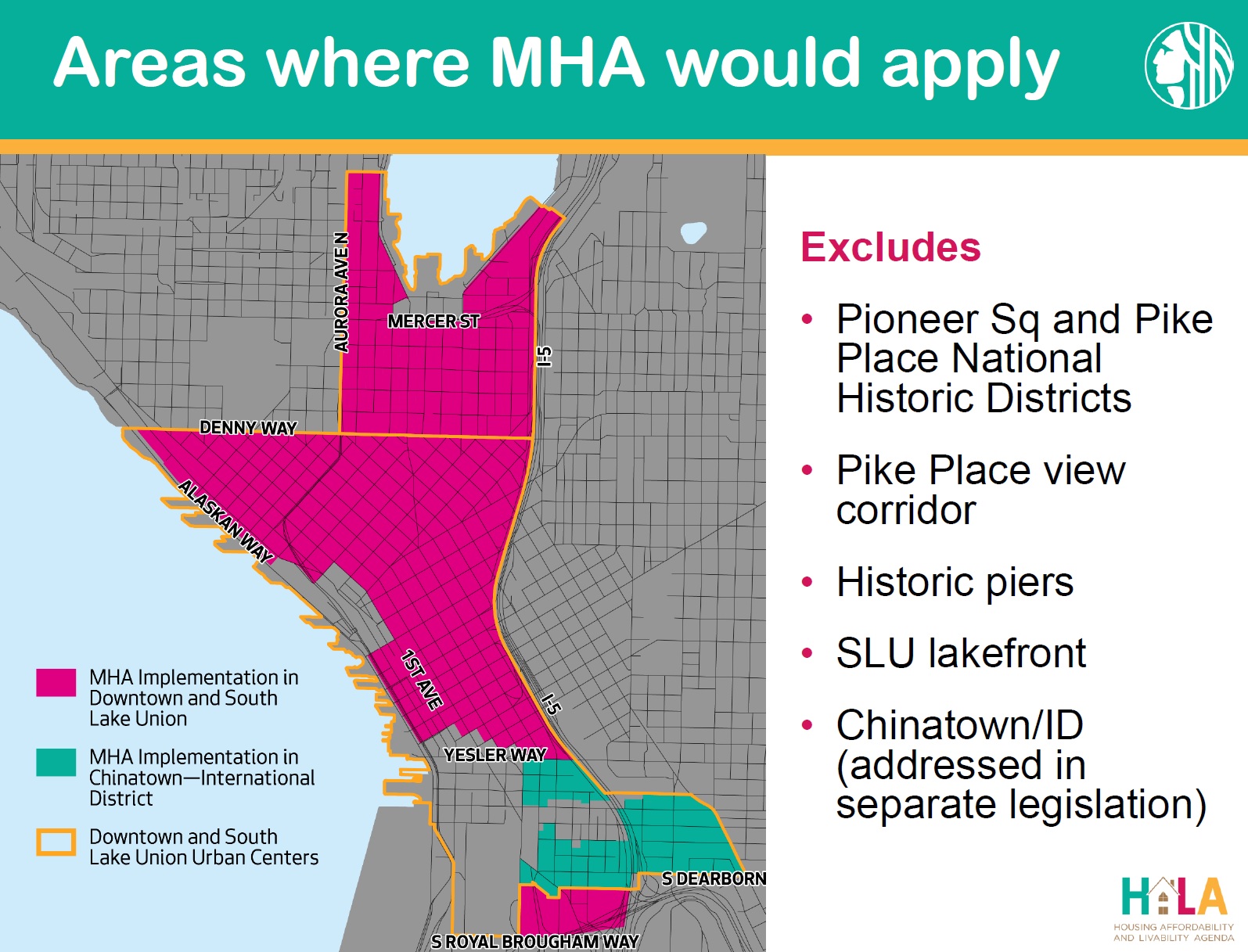 Council members at the first discussion raised a number of issue they want to pursue, including:

Johnson will continue the conversation at the next PLUZ committee meeting on March 7th, finishing the overview and beginning discussion of possible amendments.  There will be a public hearing on the evening March 13th, and another PLUZ committee meeting on the 21st at which point Johnson hopes they are deliberating amendments. He hopes to wrap it up in 3 to 4 meetings, then move on to the Chinatown/ID area.