Yesterday Wells Fargo Bank sent a letter to the City of Seattle in response to the Council’s action to cut its business ties with the bank. In the letter, Wells Fargo’s Head of Government and Institutional Banking expresses its disappointment with the decision, invokes some concern trolling over the resulting “unintended consequences for taxpayers,” and defends its investment in the Dakota Access Pipeline project.

The letter departs from the humble, apologetic tone of their last letter and disingenuously skips over or distorts inconvenient facts. Let’s dig in.

Here’s the letter in full: 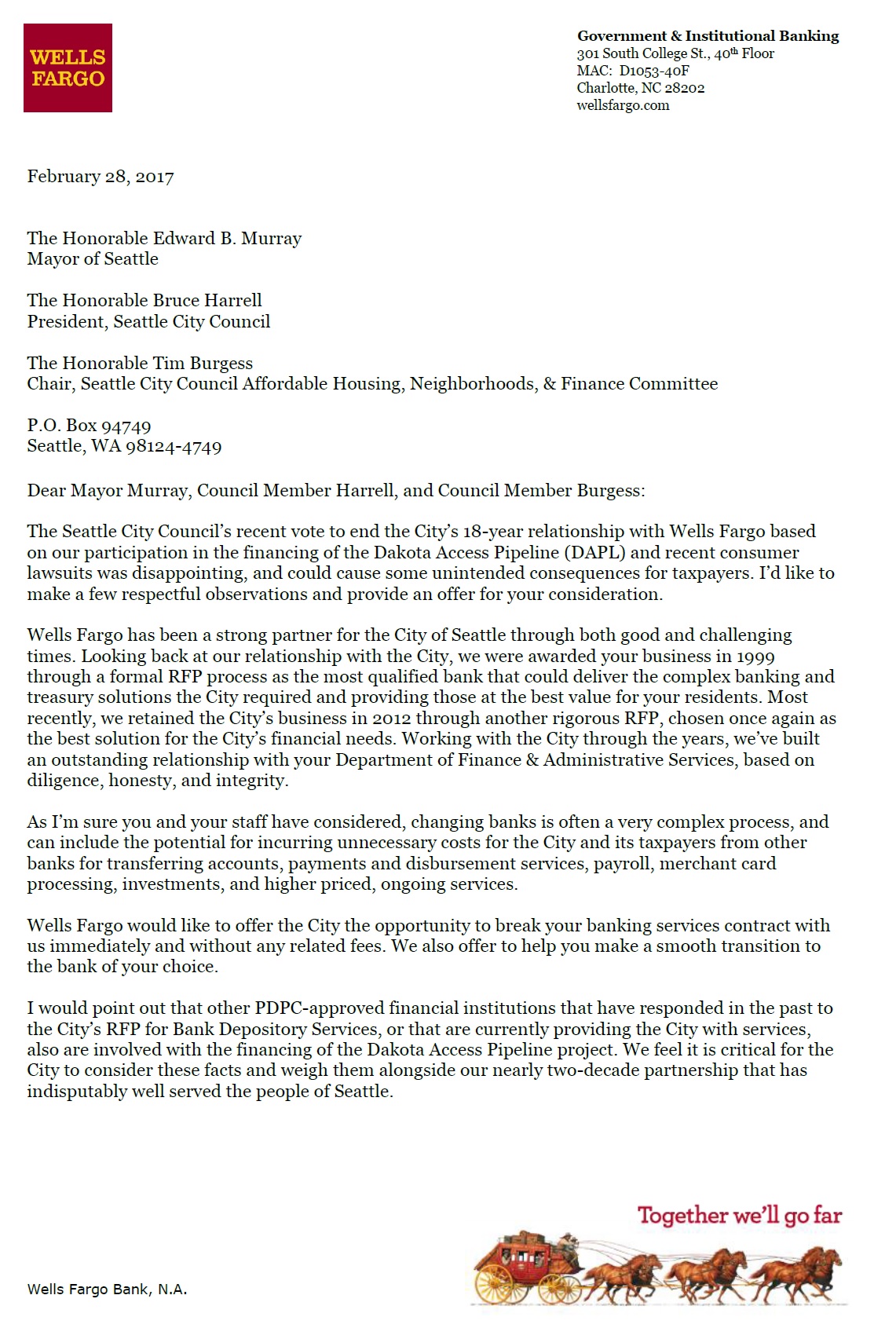 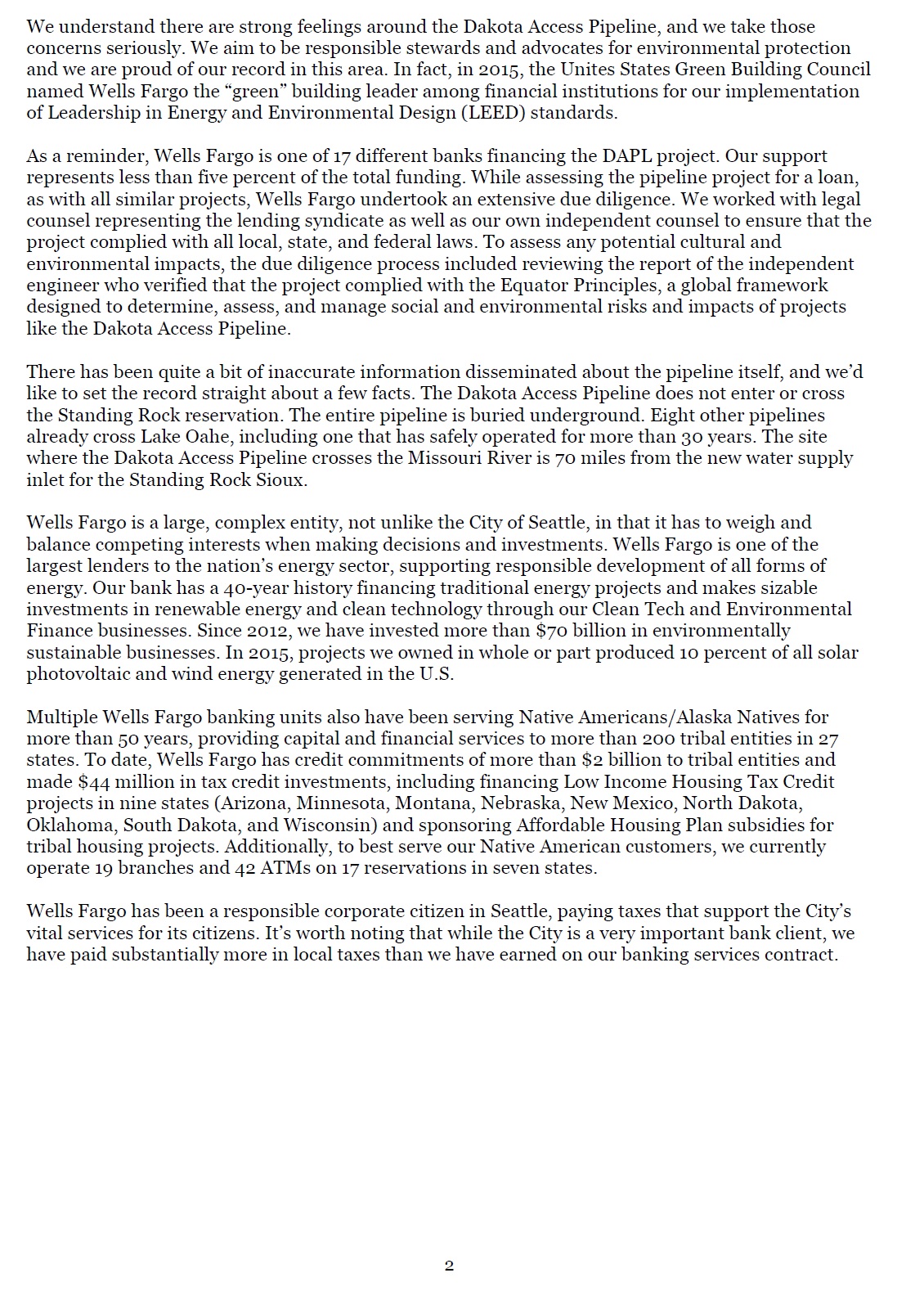 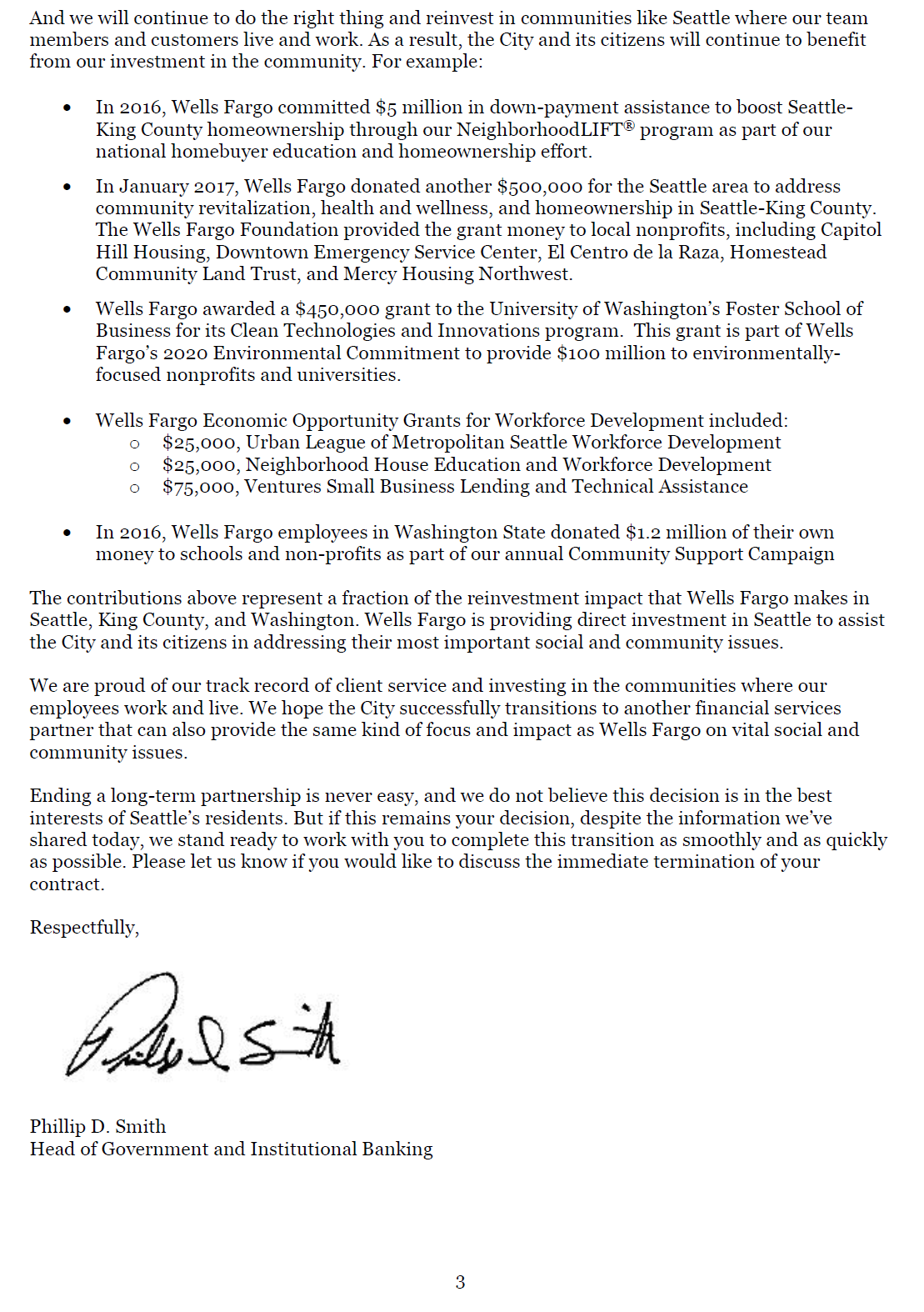 It begins by highlighting that Wells Fargo has been the city’s banking services provider since 1999, having won both the original contract and a renewal in open RFPs — the second one in 2012. What it fails to mention is the litany of transgressions that have come to light since 2012. To wit (and these are all laid out in the ordinance passed in early February):

On top of that, there are its ethically dubious investments in the private prison industry and in the Dakota Access Pipeline.  So the City of Seattle has plenty of credible reasons for not wanting to do business with Wells Fargo that have come to light since it signed the 2012 contract renewal.

Then the letter begins the concern trolling, noting that changing banks is complicated and there will no doubt be costs to the city for doing so — essentially arguing that the city should just stick with them. Of course, if one extends that logic, the city shouldn’t bother doing an RFP at all because they’ll save all that money by staying with the same vendor forever.

Wells Fargo actually then does a mature thing: it offers to let the city out of its contract (which extends through the end of 2018) early. In practice, it would take six months to complete the full cycle of an RFP for a new banking services vendor and at least another three months to move everything over to the new bank, so the earliest Seattle could replace Wells Fargo is around January 2018.  So Wells Fargo is offering a year head-start to switch over, and they are making that offer to a very disgruntled customer with whom the bank has a permanently soured relationship.

Nevertheless, Wells Fargo feels the need in its letter to point out that many other banks who would be top candidates for the city’s banking services contract are also financially involved in the Dakota Access Pipeline project (true).  They also tout their own green credentials, including that in 2015 they topped the US Green Building Council’s list for most square feet of green buildings among financial services companies (as much a recognition that they have a lot of branch offices as that they are committed to green building standards).

They also try to trivialize their perceived level of involvement in the project, listing only $120 million of direct financing — less than 5% of the total $2.5 billion of financing — as if only investing $120 million was a small thing. However, as stated in the city’s ordinance:

according to U.S. Securities & Exchange Commission (SEC) filings by the Energy Transfer family of companies (Energy Transfer Partners, L.P. (ETP); Energy Transfer Equity, LP; and Sunoco Logistics Partners LP) on February 10, 2015, February 17, 2015, and May 7, 2015, Wells Fargo maintains $347 million in total credit facility commitments to these companies building the Dakota Access Pipeline, serves as the administrative agent for a $3.75 billion line of credit held by ETP, and according to SEC filings on June 18, 2015 and January 11, 2017, Wells Fargo Securities, LLC underwrote $450 million in bonds in 2015 and $72 million in bonds so far in 2017 for ETP, all in support of the Dakota Access Pipeline project…

Wells Fargo goes on to claim that the Dakota Access project complies with the Equator Principles, and yet clearly it has issues with Principle 5: stakeholder engagement.

The letter claims that the bank is a large, complex entity that must “balance competing interests” when making investments; apparently one of those interests is ethically dubious fossil fuel industry financial opportunities. They also note that they have over 50 years of history in serving Native American communities.

Then it gets to discussing its business in Seattle. First it claims that it has “paid substantially more in local taxes than we have earned on our banking services contract.” In other words, they underbid the contract for some reason; that’s their fault, not they city’s responsibility.  They then list several investments they have made into community projects, neglecting to mention that their contract with the city requires them to do these things as part of its “socially responsible banking” provisions. Wells Fargo claims that the contributions represent “a fraction of the reinvestment impact that Wells Fargo makes in Seattle, King County and Washington,” but of course the banking services contract is also a small fraction of all the business it does in the state (and even in Seattle).

The letter closes by stating the bank’s belief that cutting ties with them is not “in the best interests of Seattle’s residents,” but nevertheless reiterating the offer of terminating the contract early and working with the city to make the transition to a new vendor smooth.

So far, there’s no word from the city as to whether it’s interested in taking up Wells Fargo on their offer of an early-exit from the banking services contract.