Late last summer, Mayor Murray announced Bridging the Gap, his administration’s short-term plan too address homelessness while the longer-term plan Pathways Home, took its time to spin up.  Both efforts have sputtered along since then, mired in city government bureaucracy and hidden behind a maddening lack of transparency and accountability. But there are now signs that the shorter-term effort is starting to find its groove thanks to a creative idea for how to reorganize the effort.

Murray has complained on several occasions that city government is too siloed, making it difficult for cross-departmental efforts to work efficiently. But earlier this year, when the Mayor asked his staff for new ideas on how to move the homelessness response along better and faster, someone suggested activating the city’s Emergency Operations Center (which is run by the Office of Emergency Management) to provide support for the effort.  In retrospect, the suggestion should have been obvious, particularly since the Mayor declared a “state of emergency” related to homelessness in November of 2015. But it seems to be working out well.

The Mayor announced in his State of the City speech that he was activating the EOC as part of the homelessness response, and on February 22 it began what is initially envisioned as a 16-week activation. Representatives from several city departments gather at 8:30am, five days a week, to spend the morning working together to solve problems.

The EOC is a special facility, occupying space in a fire station building a few blocks from City Hall, designed to facilitate quick decision-making and communications during emergencies. Two weeks ago, I and several other members of the media were invited to tour the EOC during their morning EOC activation. 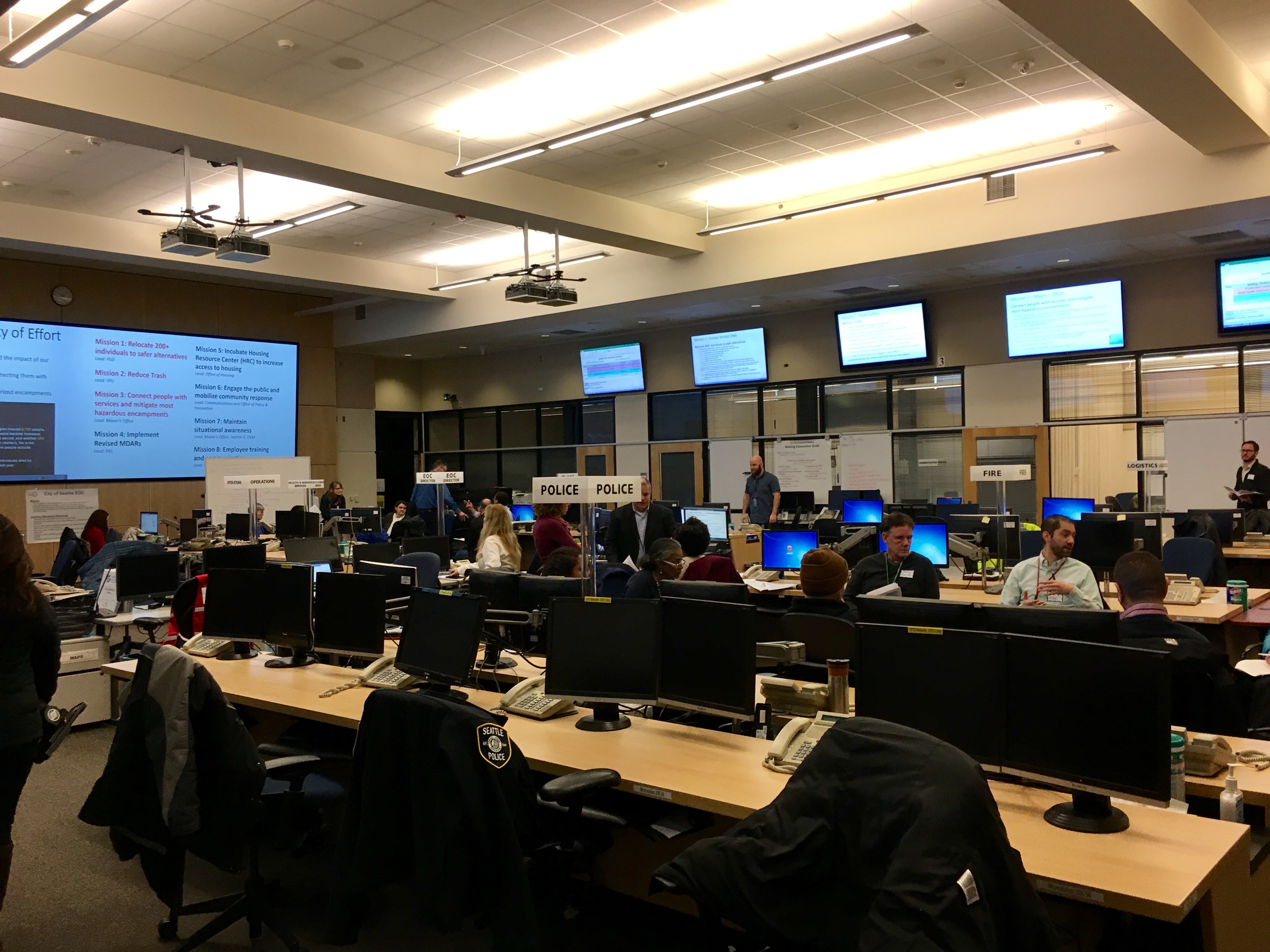 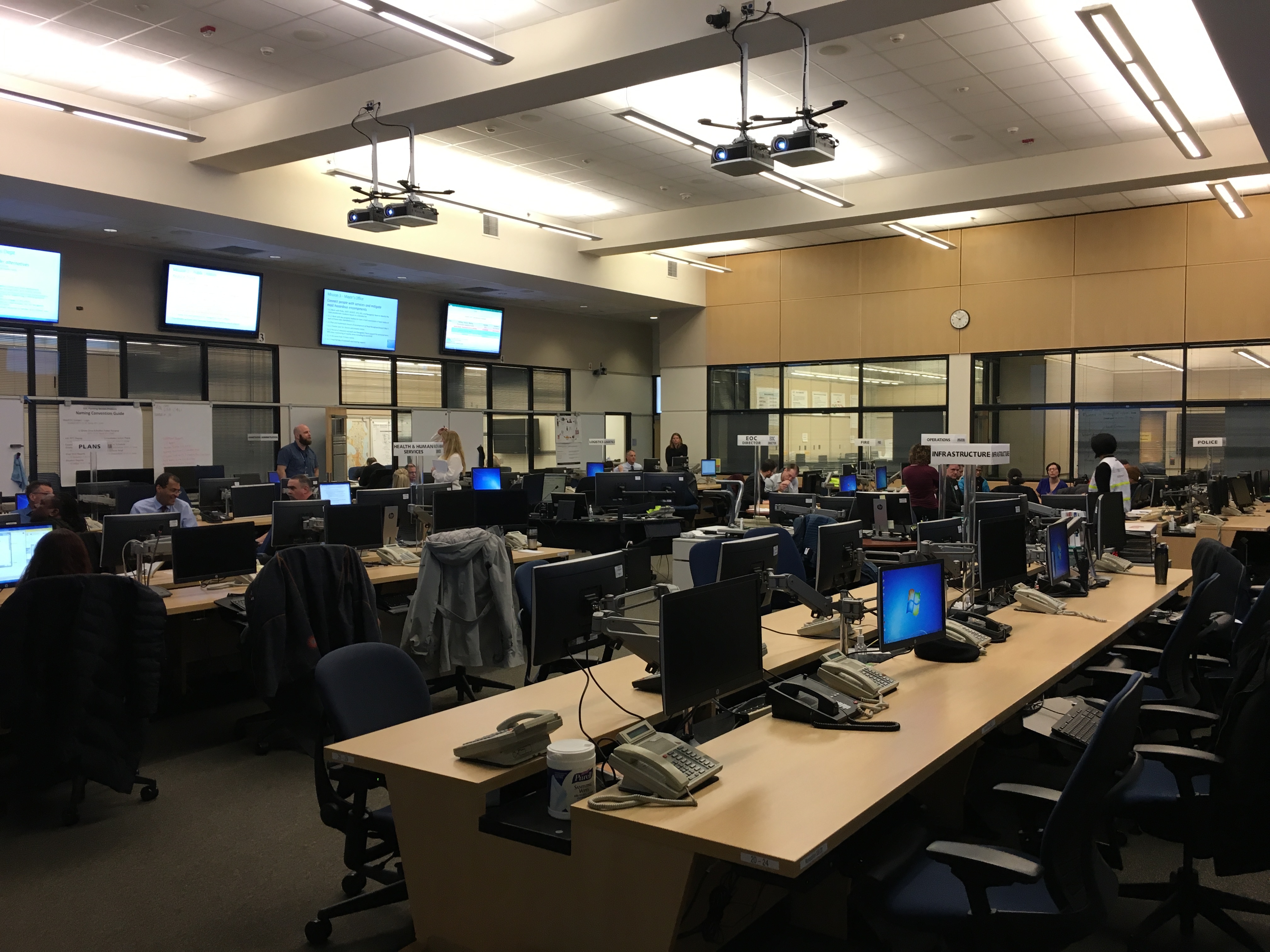 As you can see from the pictures above, the heart of the EOC is a large, cavernous room with big screens along three walls, and offices and small meeting rooms surrounding it. Islands of tables holding PCs and phones are labeled with the names of various groups participating in the effort, including Infrastructure, Health and Human Services, Plans, Administration, Logistics, Fire, Police, Operations, and the EOC Director. That allows someone working on a problem to know where to find someone in a particular department to help them. According to FAS Director Fred Podesta, the “virtual team” environment within the EOC, where for three hours every morning there are senior managers from each department, empowered to make decisions, present and willing to work across organization boundaries, that makes the EOC an effective engine. While in total about 90 people have been assigned membership to the EOC homeless activation, on any given morning Podesta estimated that 45 to 50 will be present depending on what issues are being discussed.

But the homeless effort has borrowed more than just physical space from the EOC; it’s also adopted its practices. Standard EOC procedure, Podesta explained, involves organizing the overall task into a set of “missions” that need to be accomplished. From there, weekly goals and plans are established relative to those missions.

They don’t necessarily try to tackle all of the missions at the same time, and for the first three weeks they have devoted most of their effort to Missions 1-3. Last week Podesta  and Director of Homelessness George Scarola briefed the Council on their progress to-date under the EOC activation.

On Mission 1, they have been working on three key objectives. First, they are trying to expedite the opening of the three new sanctioned encampments. On the morning I visited the EOC, that was a major focus, and a cross-department group had commandeered a corner of the EOC hall for an impromptu meeting to build their to-do list: 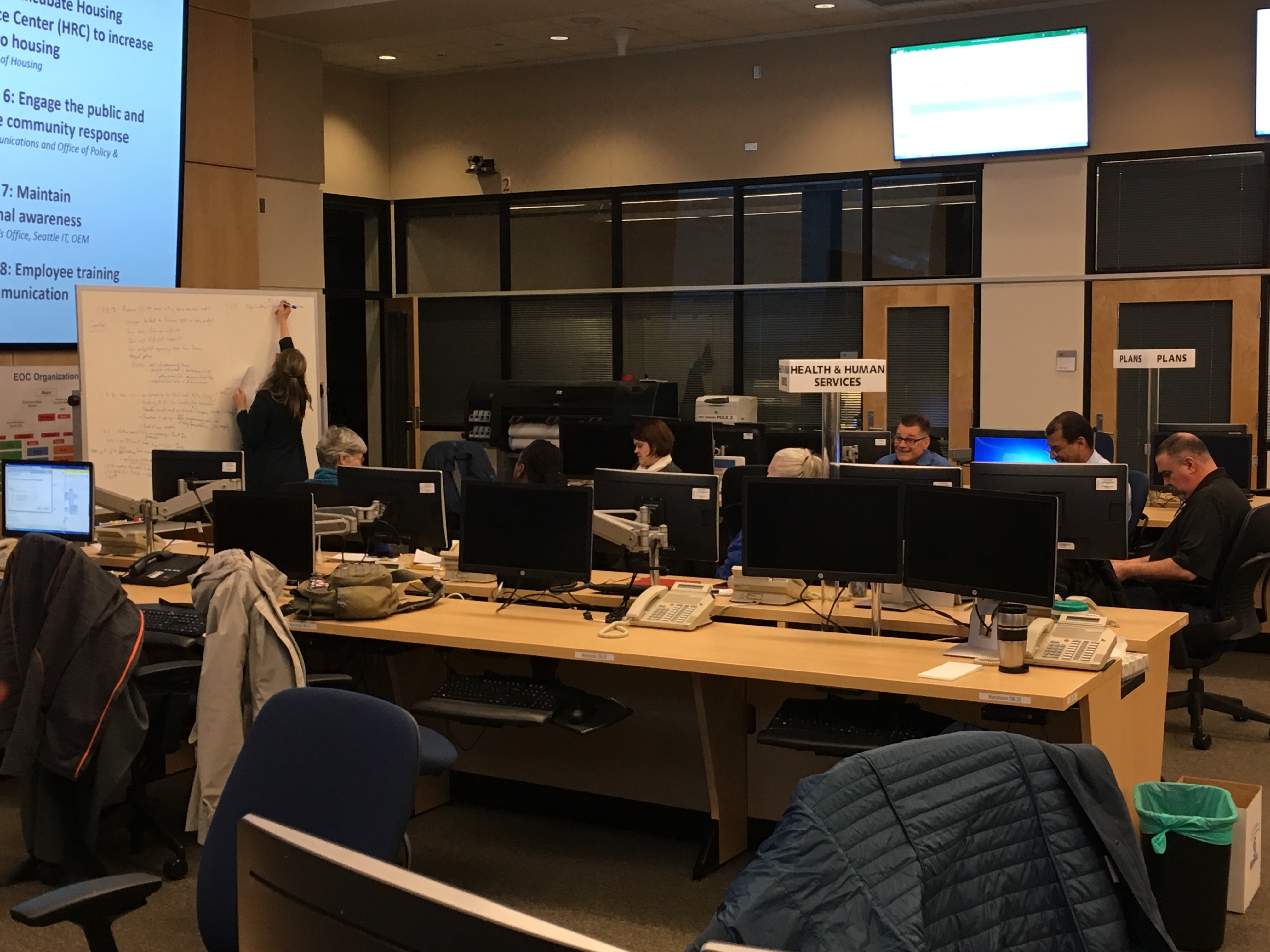 They are also working to bring together the right resources so that they can deliver to the recently-formed Navigation Team real-time shelter information so that they can make meaningful referrals. According to Podesta, now every morning by 8:30am they have in hand a vacancy list from the night before and can place it in the hands of the Navigation Team (who are headquartered in the EOC) before they head out on their daily assignments. The Navigation Team members can then provide details of each shelter to the homeless people they encounter, and even get in direct contact with the shelter to ensure that space is held if an offer is made.

And they have made progress on the Bridging the Gap RFP, having received six proposals for how to spend $1.3 million to increase low-barrier, 24-hour shelter capacity. The city has chosen Compass Housing and awarded the full amount to implement their proposal for a 100-bed, 24-hour, low-barrier shelter that serves men, women, and couples, and offers storage of personal belongings. They are not ready to announce the specific location or the timeline for opening the new shelter yet; having recently been burned by the negative reaction in Little Saigon to the announcement of the Navigation Center location, HSD is taking extra steps to improve their community outreach process before making public announcements.

On Mission 2 (removing trash), the city has complained for several months that since many of the encampments are on WSDOT property, not city-owned property, there need to be agreements in place before the City of Seattle can go onto those properties and clean them up. But they have a WSDOT representative in the EOC activation team, and that has allowed them to finally make progress on the agreements. It’s also helped with other opportunistic coordination; for example, this past weekend the I-90 express lanes were shut down for maintenance work, and that created an opportunity for more and larger outreach and cleanup teams to go into that areas safely and work on the unsanctioned encampments in the area.

Much of the effort on Mission 3 is centered around the work of the Navigation Team, which brings together specially trained police and outreach workers, along with other resources, into one specially trained unit to address some of the most challenging situations. 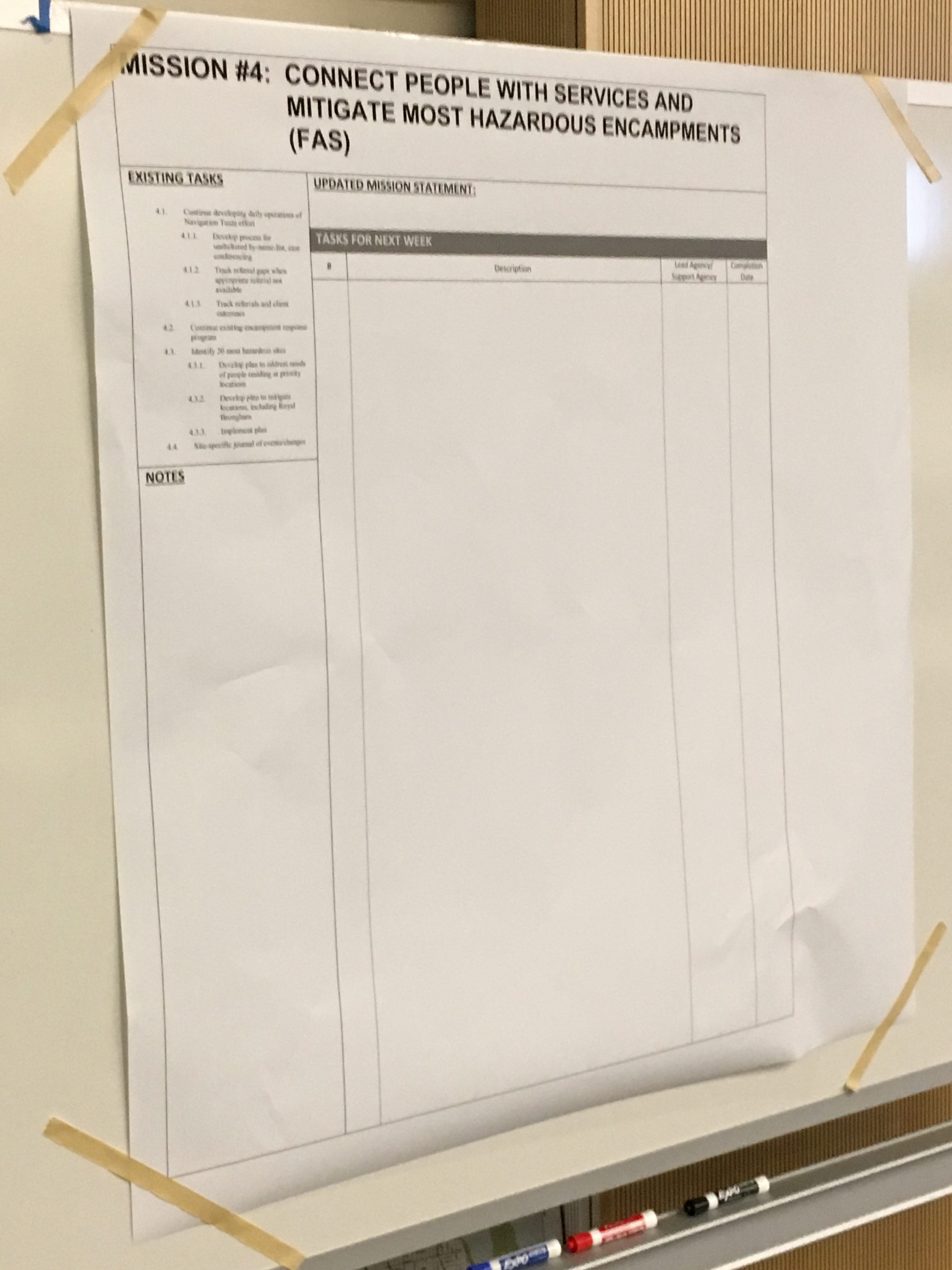 Podesta and Scarola said that there are about 400 chronic encampment locations around the city (and many more that come and go). Of those 400, about forty create truly hazardous situations: inherently dangerous locations that create risk of death or injury; hazardous locations with accumulations of biowaste, rodent infestations, needles or other unsafe conditions; areas with significant criminal activity; and areas with a high impact on a sensitive areas such as a school, playground or food bank. The Navigation Team has a list of those top 40; they assess their current status, prioritize them, then bring in the resources to address them.

Missions 8 (employee training) and 9 (communications) are ongoing, “cross-cutting” efforts that have also seen some attention. They are continuing to enhance the city’s main web site for homelessness information, http://seattle.gov/homelessness, with additional information. In particular, two issues were raised at the Council briefing that need better public awareness:

The EOC activation team is working on solutions for reducing both of these problems and giving better directions to Seattle’s citizens on how they can help without making problems worse.

Podesta explained that since the EOC is an existing facility, the incremental cost to the city for using it for this purpose is fairly small; the biggest cost is the potential delays in other work those 45-50 people a day aren’t getting to when they are spending their time in the EOC. Though the added efficiency of getting things done quickly on addressing the short-term homelessness issues probably compensates for it.

The good news is that the city has found an effective way to break down departmental silos and move some decisions and actions forward to accelerate the short-term homelessness response. At this point they plan another 13 weeks of using the EOC as a daily focal point, though they have reserved the right to modify that plan.  Hopefully it will continue to be a successful model as they move to address some of the other missions they have defined.