This morning, Council member Lorena Gonzalez launched an effort to secure a paid leave benefit for all employees in Seattle. But she’s not alone: the state legislature is currently working on the same issue.

Gonzalez used her GESCNA committee meeting this morning as a “working session” on the issue of paid family leave. There were three topics on the agenda: presentation of a Council-commissioned survey of employers and employees, an update on the pending state legislation, and a roll-out of Gonzalez’s own proposal.

Here’s the presentation slides on the survey results; they are broadly informative, if not particularly surprising.

The Office of Intergovernmental Relations (OIR) gave the update on the state legislative work on the issue, presenting this slide as a quick guide.  There are two competing bills: a Democratic one in the House, and a Republican one in the Senate. Legislators are engaged in negotiations to try to reconcile the two proposals. The underlying mechanism is the same: both proposal work like an insurance program, with payments into a fund in advance and payments to employees on eligible leave in lieu of their regular wages. But they differ on many parameters: which employees are eligible, which employers are required to participate, how many weeks of paid leave are allowed, and how much employees receive in payment.  Generally speaking, the Democrats’ version covers more employees, provides for more weeks of paid leave (up to 26 weeks), and splits the premiums  50/50 between employers and employees.  The Republicans’ version requires employees to cover 100% of the premiums, and additionally preempts local jurisdictions from overlaying their own customizations on top of the state program. 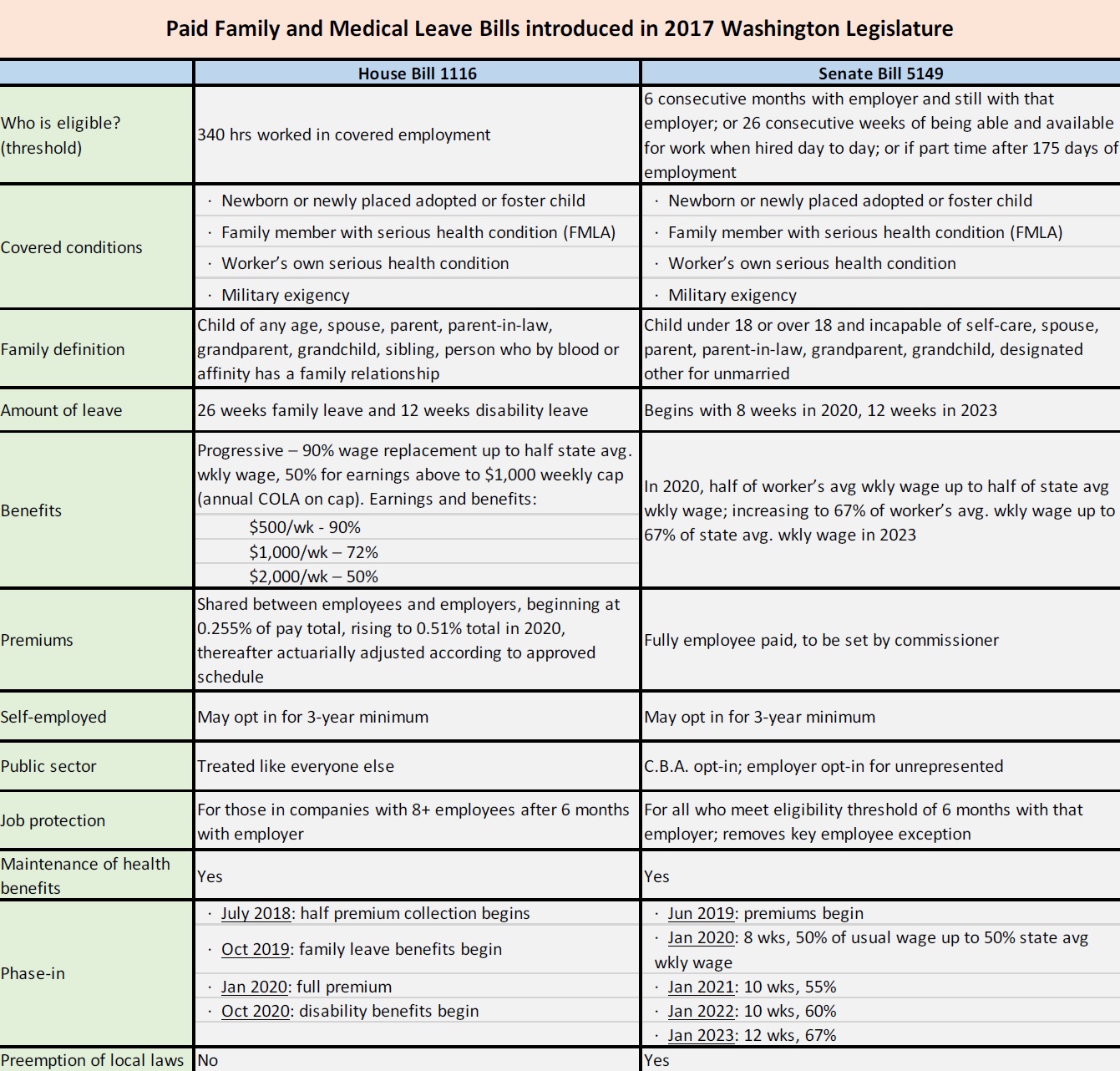 The OIR team observed that the issue of paid leave has been a topic of discussion in Olympia for several years, and in fact a paid leave program is actually on the books but has never been funded. But they are optimistic that a real, funded program may emerge, as they are seeing interest and engagement from both sides and active negotiations continue. “The ingredients are there, and people are making a good faith effort,” said OIR’s Jasmine Weaver this morning. Gonzalez was equally optimistic: “There are more areas in which business and worker-side advocates agree on than don’t.” The state legislature’s regular session ends on April 23rd, though this might drag out into a special session.

Gonzalez’s own proposal for a paid family leave program emerged from “listening sessions” she held with a variety of stakeholders including approximately 100 employers, and hews closely to the state Democrats’ plan: up to 26 weeks of paid family leave and up to 12 for personal medical leave, with most of the eligibility requirements the same. She is seeking “the most universal policy possible,” in which all businesses, regardless of size, are required to participate and the most employees possible are eligible to benefit.

However, Gonzalez found the wage replacement level lacking, largely because it was based on the “state average weekly wage.” Both state parties’ plans cap payments at half the state average weekly wage, which comes out to around $500.  That’s barely enough to scrape by in the areas of the state with the lowest cost of living, and it’s not nearly enough for urban areas such as Seattle. She and Council member Herbold both found fault with the approach of using a state average, rather than an employee’s own wages. Gonzalez’s proposal fixes that, with employees receiving 100% of their regular wages up to $1000 per week. That works out to 74% of regular wages for someone making $70,000 per year, and 100% for those making $50,000 or less per year. She also favors having the premium payments split, with 70% from the employer and 30% from the employee. 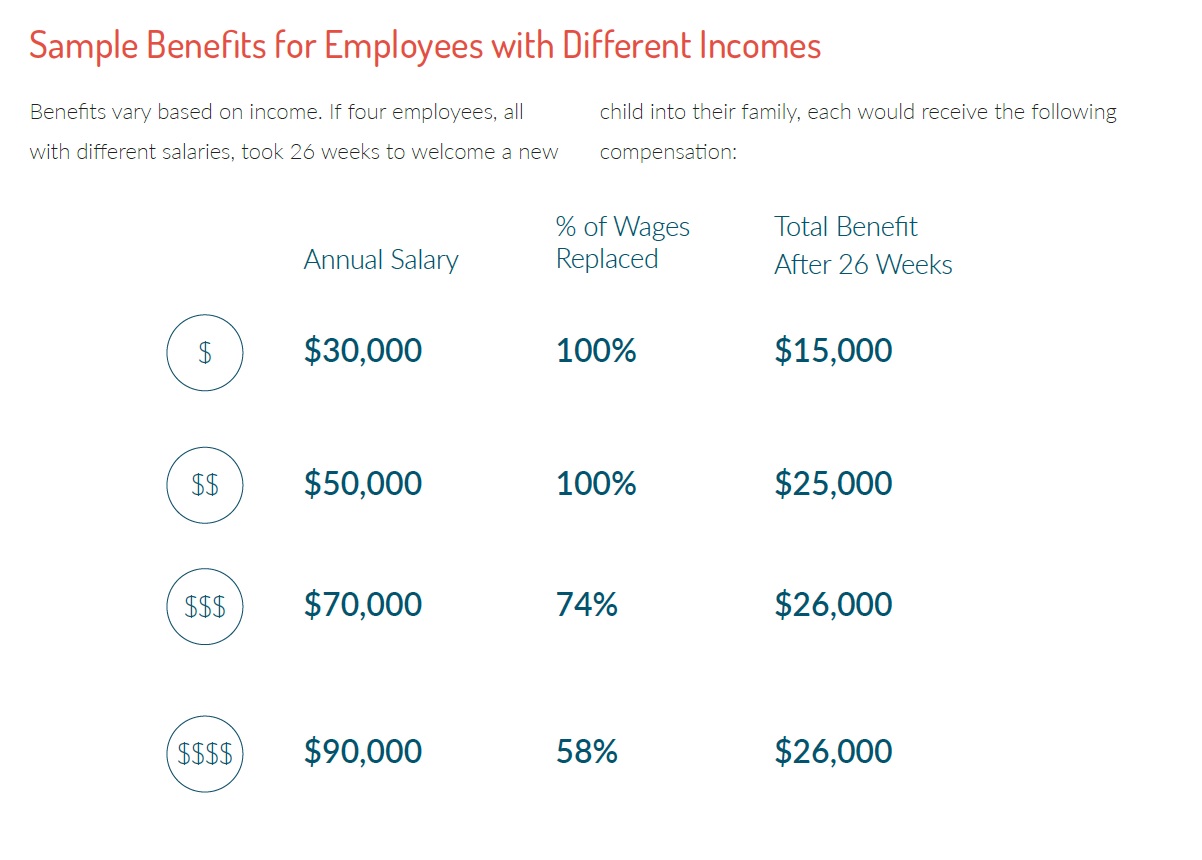 None of the three proposals provide a full analysis of the costs of the program. The Democrats specify that premiums will be .255% of total pay, rising to .51% in 2020 with further adjustments as necessary after that. The Republicans’ bill simply says that the premium rate will be set by the state insurance commissioner. Gonzalez’s bill doesn’t even say that much. Calculating premiums paid into the system is a complicated actuarial effort, requiring an estimate of the frequency of “covered conditions” including a new baby, an adopted or foster child, a worker or family member with a serious health condition, or a “military exigency.”

The public comment session this morning involved almost twenty speakers, representing both employers and workers.  They were universally in favor of a paid leave program. However, the vast majority preferred a state policy over one just for Seattle and urged the Council to wait until the state’s legislative process ran its course before jumping in to create their own program. For businesses with locations both inside and outside the city limits, having different rules for their sites is difficult for them to manage. For her part, Gonzalez hoped that the state would enact a fair and equitable plan, but stood firmly opposed to a state preemption on Seattle doing its own thing since in her view Seattle residents have their own unique needs. And if the State fails to enact paid leave, she said “Seattle, as we always are, is ready to stand on its own two feet to address the real issue of gender inequity with a known solution, which is a universal, portable paid family and medical leave program.”

Despite the fanfare this morning, the Council is very unlikely to do anything on the topic (other than lobby in Olympia this week) until the state legislative session finishes. Hopefully the folks in Olympia will do the right thing and the Council won’t need to take it up at all.