This afternoon, Mayor Ed Murray and City Attorney Pete Holmes announced that they have filed a lawsuit on behalf of the city against President Trump, Attorney General Sessions, and Secretary of Homeland Security Kelly over Trump’s January 25th executive order directing a crackdown on so-called “sanctuary cities.” 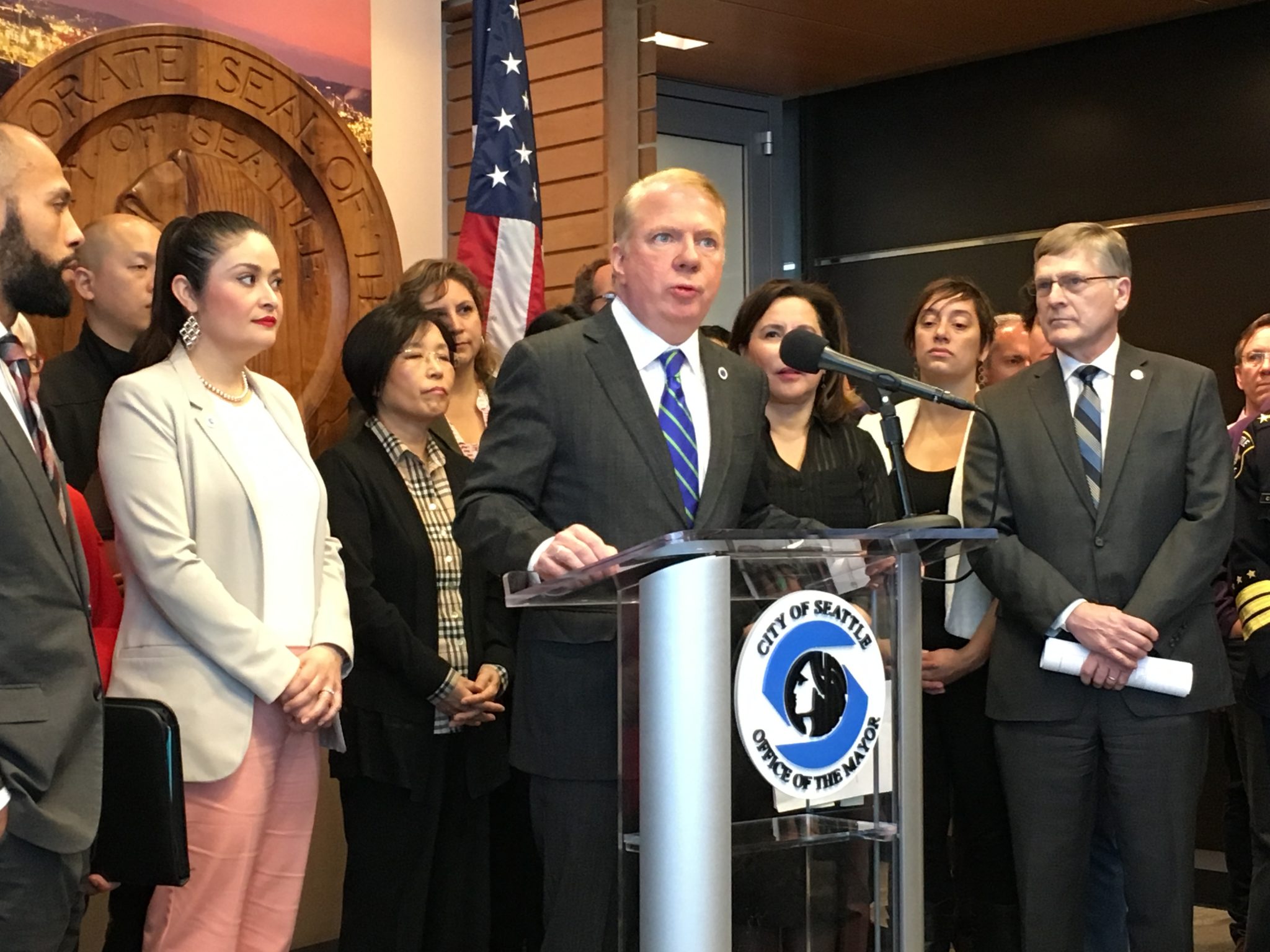 At the heart of the complaint filed today are allegations that several aspects of the executive order are unconstitutional. In particular:

In order to have standing to sue, the city needs to show that it has suffered an injury. That’s a little tricky, because the Trump Administration hasn’t made a formal declaration that Seattle is a sanctuary city, nor has it actually withheld any federal funds yet. The city addresses this by pointing to public comments that Trump made on the campaign trail when he referenced Seattle in the context of sanctuary cities, and by pointing out that the “irreconcilable uncertainty” created by the threat of withholding funding has thrown the city’s budget planning and management into turmoil: over $50 million of federal funding are in question for 2017 alone.

The lawsuit asks for declaratory relief: a statement by the court of the legal principles as applied to the facts at hand. Seattle asks the court to state three things:

Issue #1 is interesting because, as I’ve written before, Seattle’s particular flavor of  being a “sanctuary city” is to prohibit city employees from asking someone about citizenship or immigration status, whereas 8 USC 1373 prohibits cities from restricting the ability of city employees to communicate with federal officials about immigration status. By the letter of the law, there’s no conflict between the two. Holmes confirmed for me this afternoon that he believes the city is fully compliant with 8 USC 1373.

Yesterday, Sessions stated that he would require cities to certify compliance with 8 USC 1373 as part of applying for federal law enforcement grants. Holmes told me this afternoon that he was unsure exactly what it meant to “certify compliance” (again, Sessions was vague) but that he was happy to talk with the Justice Department about what the city can do to assure the federal government of its compliance.

Where it gets trickier is issue #2, because the executive order says:

The Attorney General shall take appropriate enforcement action against any entity that violates 8 U.S.C. 1373, or which has in effect a statute, policy, or practice that prevents or hinders the enforcement of Federal law.

That’s much broader, and if that is the intended definition of a “sanctuary city” then Seattle might indeed be one. But it’s also extremely vague. What qualifies as “preventing or hindering the enforcement of Federal law?”  Is that a reference to ICE detainer requests? It might be; Sessions and Kelly have been saber-rattling lately over the issue, publishing a list of jurisdictions that have refused to honor detainer requests.

And there’s an even bigger question sitting there quietly: it says “Federal law,” not “8 USC 1373” or even “federal immigration law.” The President is instructing the Attorney General to take “appropriate enforcement action”  (vague and undefined — is this a reference to withholding funds, or something else?) if a city “prevents or hinders”  (also vague and undefined) enforcement of any and all federal laws.

Which brings us to issue #3. Here’s the explanation from the city’s complaint about why this section of the executive order is unconstitutional:

The Spending Clause precludes the enforcement of funding conditions of this sort.  It is settled that, “if Congress intends to impose a condition on the grant of federal moneys, it must do so unambiguously.” … This is because “[t]he legitimacy of Congress’ power to legislate under the spending power … rests on whether the State voluntarily and knowingly accepts” the federal conditions… “There can, of course, be no knowing acceptance if a State is unaware of the conditions or is unable to ascertain what is expected of it.”

It also runs afoul of the requirement that any requirements placed upon state and local jurisdictions as a condition of receiving funding must be relevant to the use of the funding.  The only federal funds that could be legally conditioned on compliance with immigration laws are those related to immigration.

Of the three questions the city is asking for the court to rule on, the first two are Seattle-specific and wouldn’t hold for any other city that has a different flavor of “sanctuary.” But the third is directed at invalidating part of the executive order itself, and if the city is successful it would remove the threat of withholding of federal funds from all sanctuary cities.

There are a couple of other interesting topics raised in the complaint. It briefly makes the case that 8 USC 1373 itself is unconstitutional, as a federal directive on the responsibilities and behavior of local government employees. But for some reason, the city chose not to press the issue and ask the court to invalidate the law. I have an inquiry into the City Attorney’s office as to why they did that.

It also directly confronts an assertion that both Trump and Sessions have made: that local governments’ refusal to enforce immigration laws have made the country less safe. In fact, they argue just the opposite: that Trump’s executive order has stoked fear among immigrant populations across the United States (and locally) which has left them less willing to contact the police to report crimes — including domestic violence and rape. They point to multiple reports (here, here and here)  showing that local law enforcement’s ability to build strong relationships with the community is essential to public safety. They also note a study showing that sanctuary cities are generally safer (i.e. have lower crime rates) than other communities.

Council members Debora Juarez and Lorena Gonzalez had a few choice comments at the press conference this afternoon and in their published statement. My favorite: “We should not allow the federal government to use local police as a federal militia.” 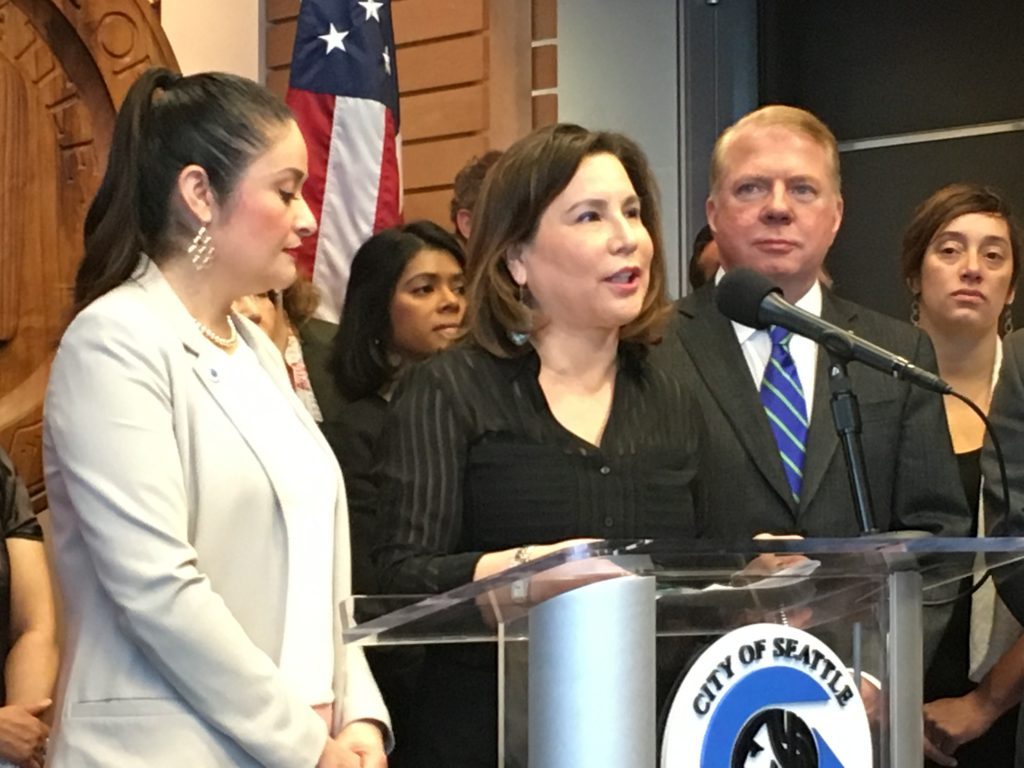 This case is unlikely to play out quickly. The city is not asking for an emergency injunction or a temporary restraining order, so the legal machinery will turn slowly. Expect it to take months, if not years, to work its way through the courts. Unless, of course, the Trump Administration actually takes action to withhold funds from Seattle, or worse, to try to “claw back” already granted funds as Sessions threatened to do yesterday. Then the city may amend their case to ask for immediate relief.