This week the court-appointed monitor for the implementation of the Consent Decree filed a report on how the Seattle Police Department is doing on its goals to eliminate excessive use of force.  There was a lot of good news, though a few areas of concern remain. Let’s dive in.

The Monitor finds that overall use of force by the SPD is down – both across time under the Consent Decree and compared to the time period studied by the original DOJ investigation. Overall, use of force has gone down even as officer injuries have not gone up and crime, by most measures, has not increased. At the same time, the force that SPD officers do use is, by and lrge, reasonable, necessary, proportional, and consistent with the Department’s use of force policy.

Let’s start with the statistics on incidents where police officers used force. SPD groups those incidents into four categories:

The fourth type is “OIS” which stands for “officer-involved shooting.”

There were 2,385 incidents where use of force occurred between July 2014 and October 2016. The monitor splits the time period in half; the first half represents the time when new use of force policies were drafted and officer training occurred, and the second half is the period when the new system was fully in place. 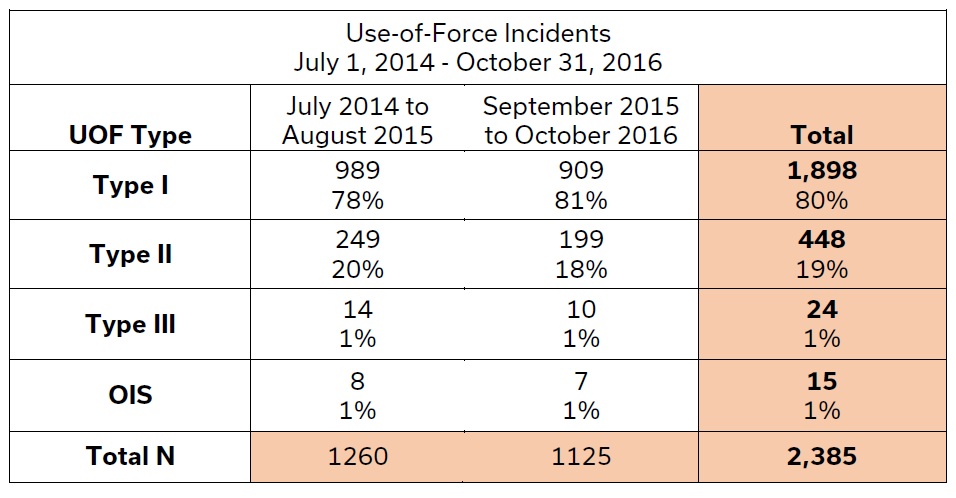 As one might expect, about 80% of incidents were the lowest level of force. Overall the number of use-of-force incidents is decreasing, with the lowest type taking an increasing share of the whole over time. In fact, it suggests that police might be opting for less serious forms of force when force is required.

The monitor’s report provides some graphs to show the trend over time. And frankly, they suck. 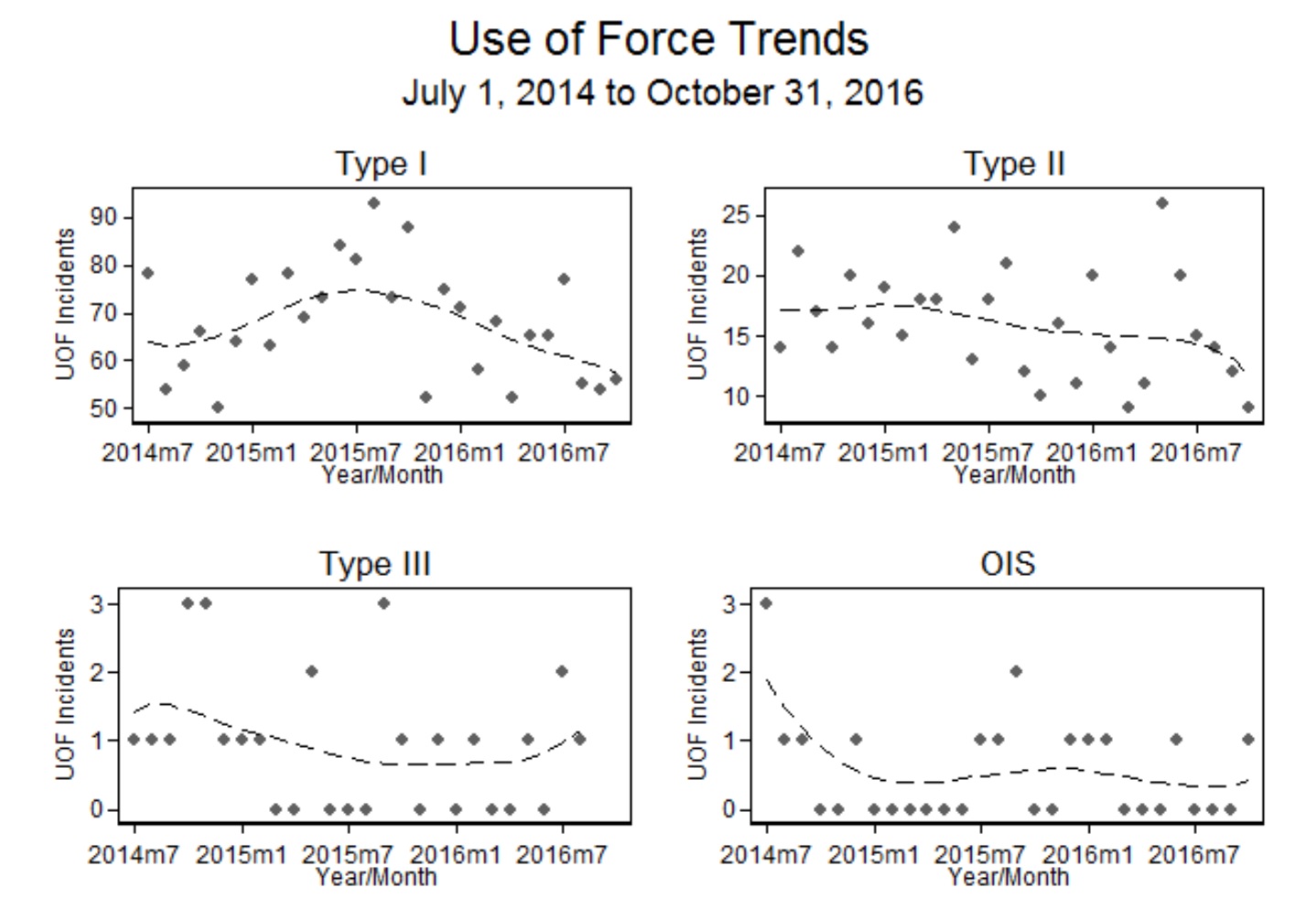 So I made some better ones. 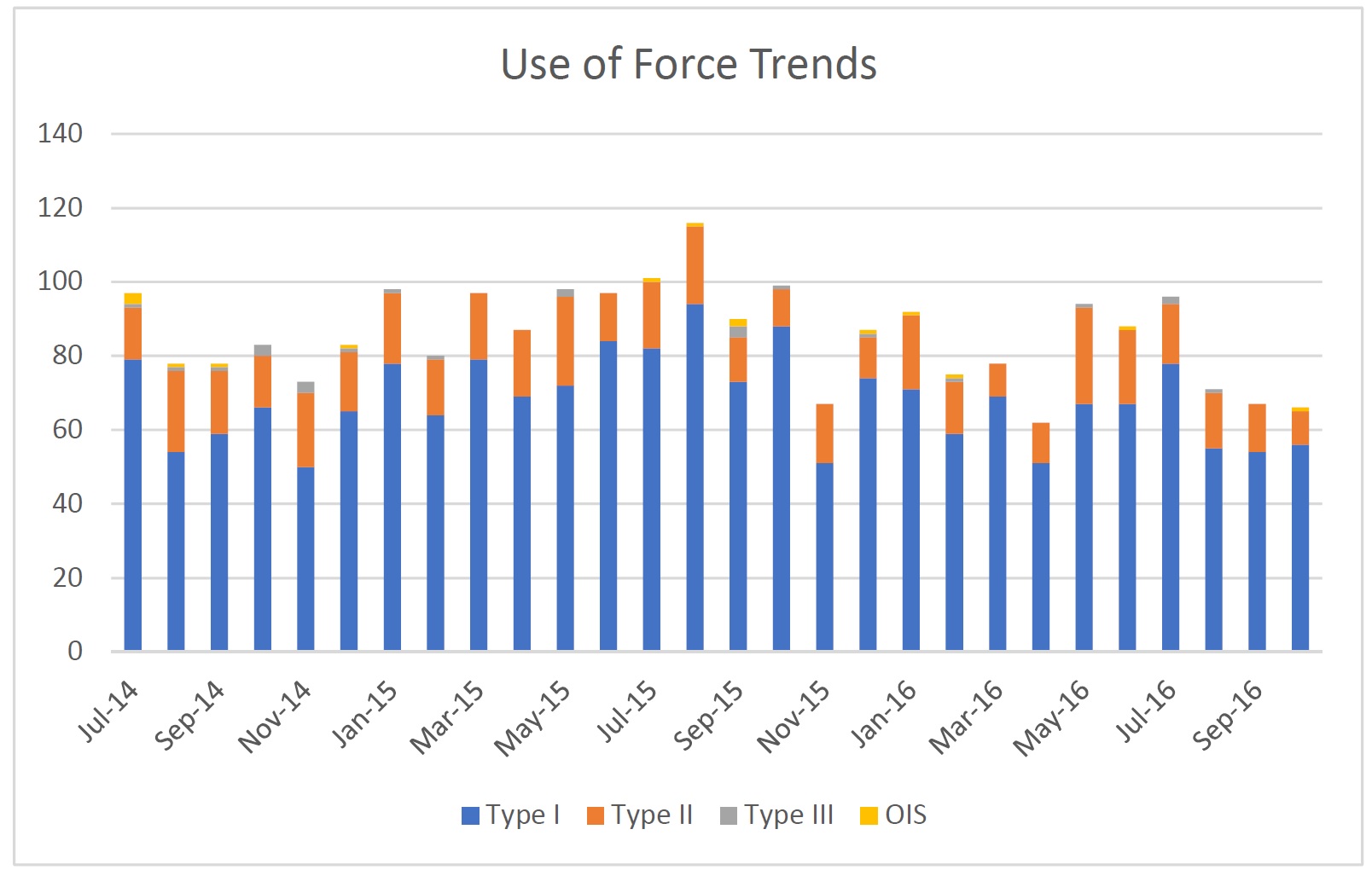 You can see very clearly that Type III and OIS are minimal — in fact the levels are so low that it doesn’t even make sense to talk about trend lines. The Type I incidents are the vast majority. You can also see that overall levels have dropped in the second half, and that Type II incidents are a smaller fraction of the whole.

Some other key points in the report:

Handcuffs, use of a control hold, and pointing a firearm were the most common types of force applied.

Note that not all handcuffs use qualifies as “use of force.” Also there has been a dramatic decrease in the use of police batons and tasers since the Consent Decree was put in place.

The frequency in which SPD officers use force varies. 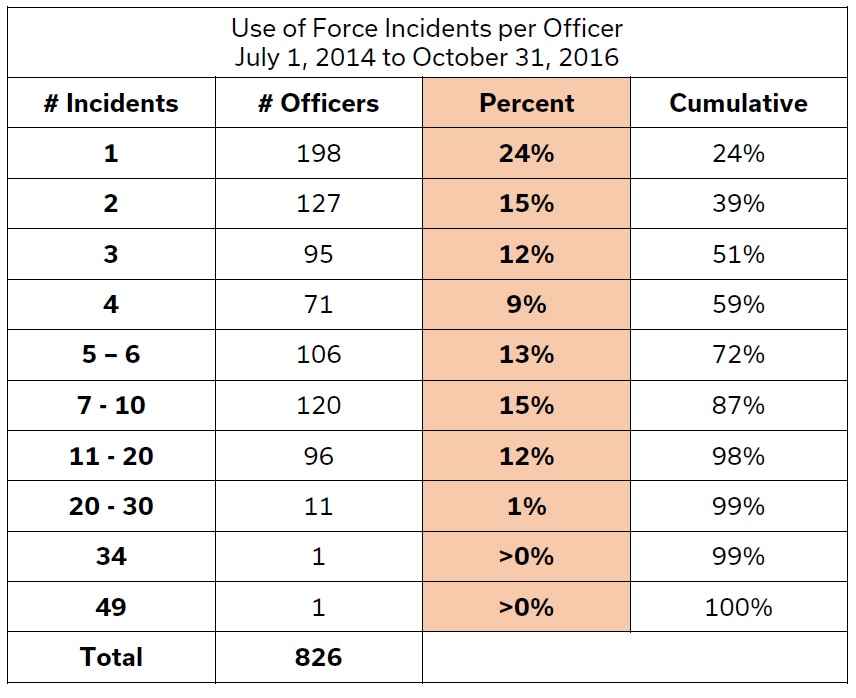 Of the 826 officers who used force, the median number of times an officer used force over the 28-month period studied was 3, and almost one quarter were only involved in one incident. On the other hand, 109 officers (13%) were involved in more than ten incidents, and one used force 49 times. But there is important context that must be considered in looking at this data. First, officers have a variety of assignments that also vary in the likelihood that they will encounter a situation where use of force is required — and the monitor noted that the officer involved in 49 incidents indeed has a “particularly active watch and beat” that would likely cause him to encounter more such situations. But it’s also notable that those who used force more often did not use different or more serious force than those that used it less. 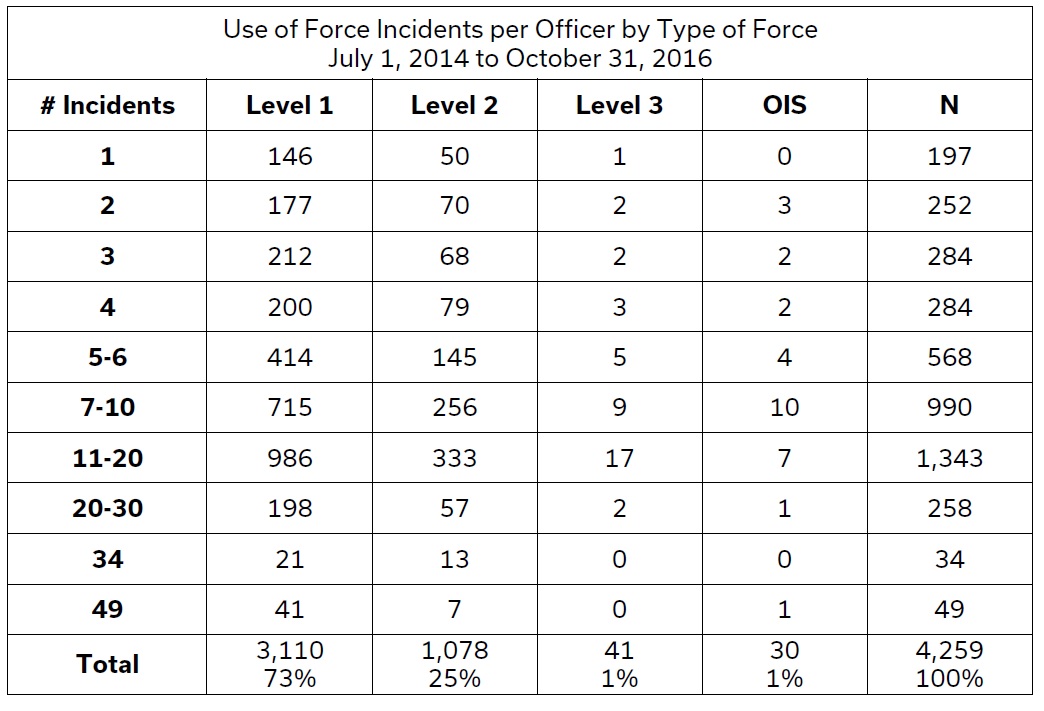 Nevertheless, the monitor emphasized that SPD needs to investigate this more to understand whether there are individual officers who are over-using force.

There are still some patterns of racial bias in police use of force, though only in some dimensions.

While black Seattleites make up only 8% of the city’s population, they are subjected to 33% of the use of force incidents, while the 70% of the population that are white experience only 41%. However, the monitor didn’t find disparities in the type or severity of force used — the disproportionate levels were fairly consistent across all levels. That said, they did find that among the least serious uses of force, officers opted more for pointing a firearm at people of color and for using hands-on control holds on white people. They didn’t find a trends that would explain that disparity.

In a large fraction of the incidents, the subjects were impaired. The monitor found that 57% of subjects were assessed by a police officer as impaired by either a “behavioral crisis” (possibly due to mental health issues) or substance abuse.

This is even more pronounced with more serious uses of force. But the monitor also found that officers were more likely to asses white people as “impaired” than black people.

It’s as yet unclear whether this is an assessment bias among the officers or whether a higher proportion of black people are, in fact, impaired during these incidents, and more study needs to be done to understand this.

Also of note: 92% of Taser use was on people assessed by officers as impaired.

There is no evidence supporting the belief that reducing officers’ use of force leads to more officers getting injured. In fact, the SPD data shows just the opposite: officer injuries correlate closely with frequency of use of force. The monitor’s chart doesn’t make this easy to see: 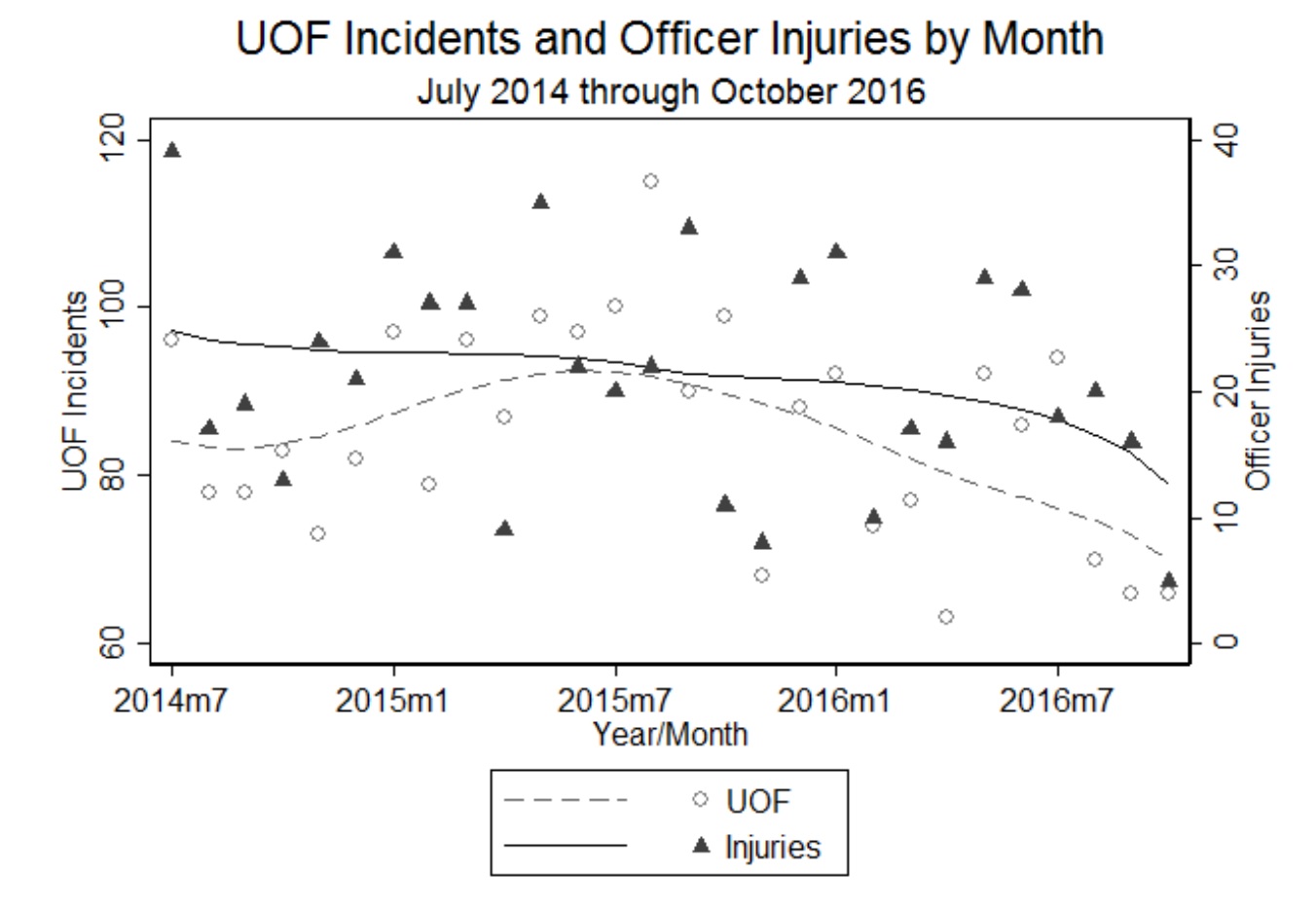 Here’s a new one, where it’s crystal clear: 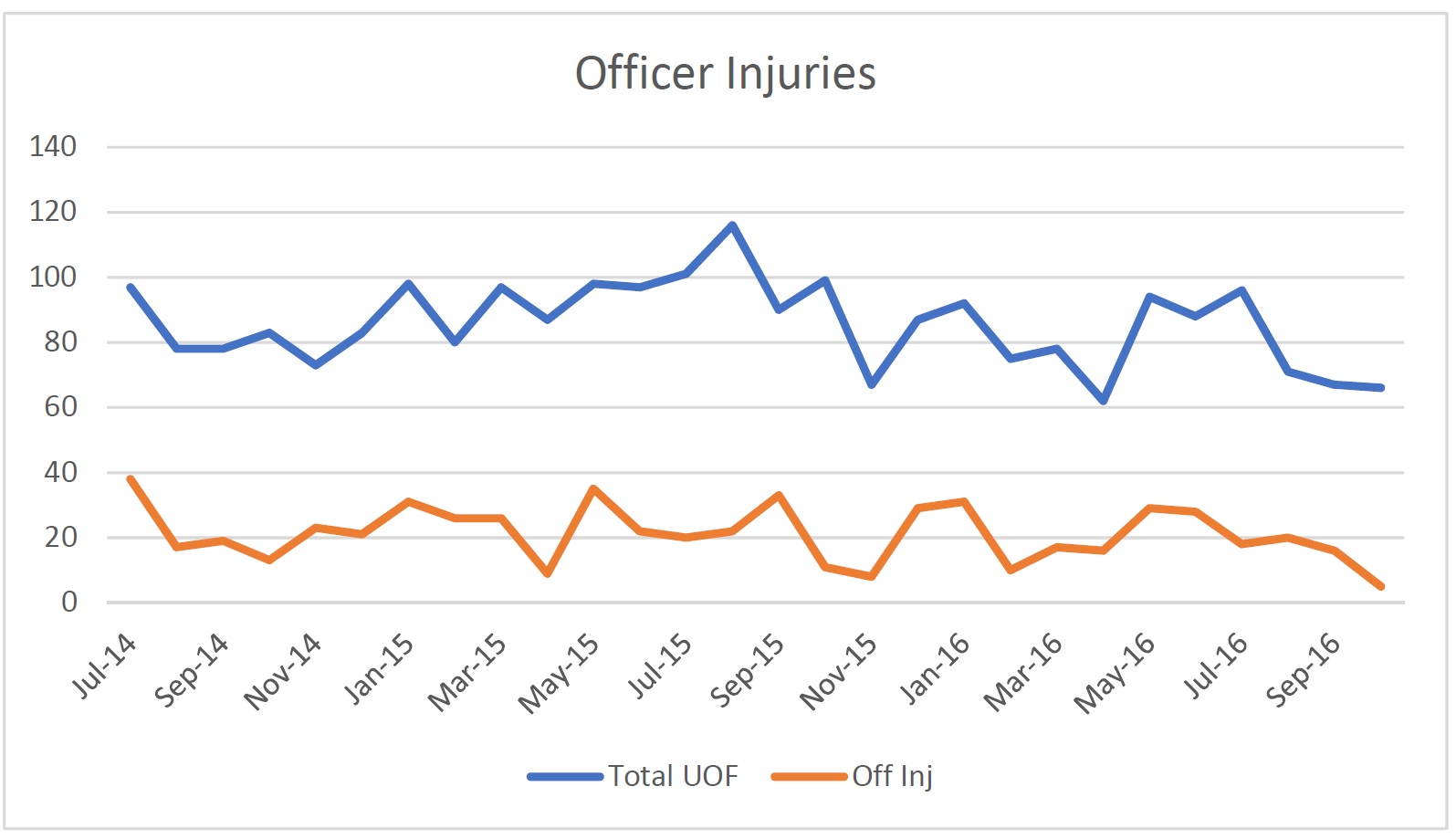 The correlation is a little loose because the total number of officer injuries is on the small side. But you can certainly see it, and that both are slowly trending down over time.

Likewise, reducing use of force does not increase crime. More bad graphs from the monitor’s report (hard to read, and using a nonzero base to exaggerate the effect): 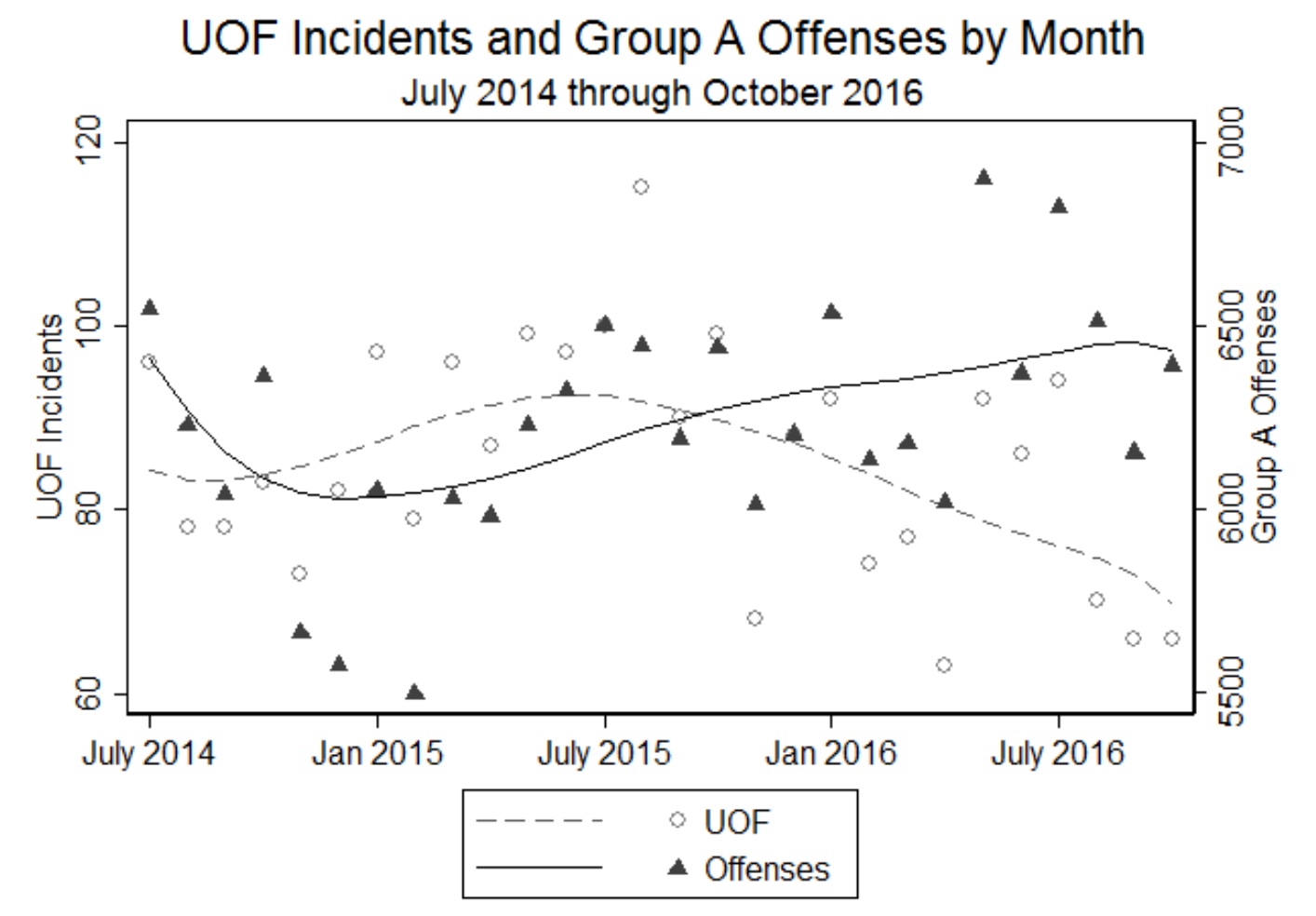 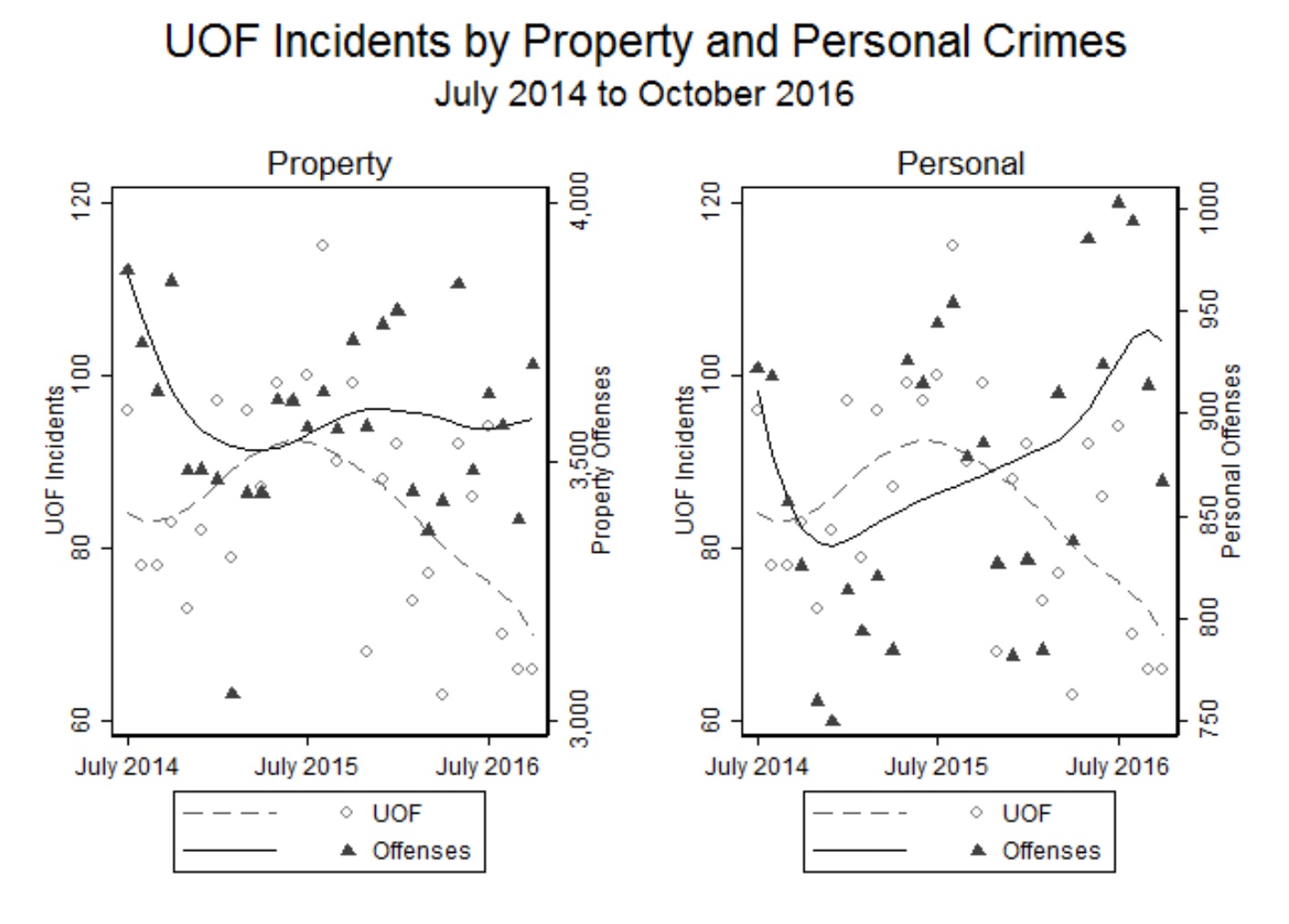 And a better graph (I got the crime statistics off the SPD web site for this one): 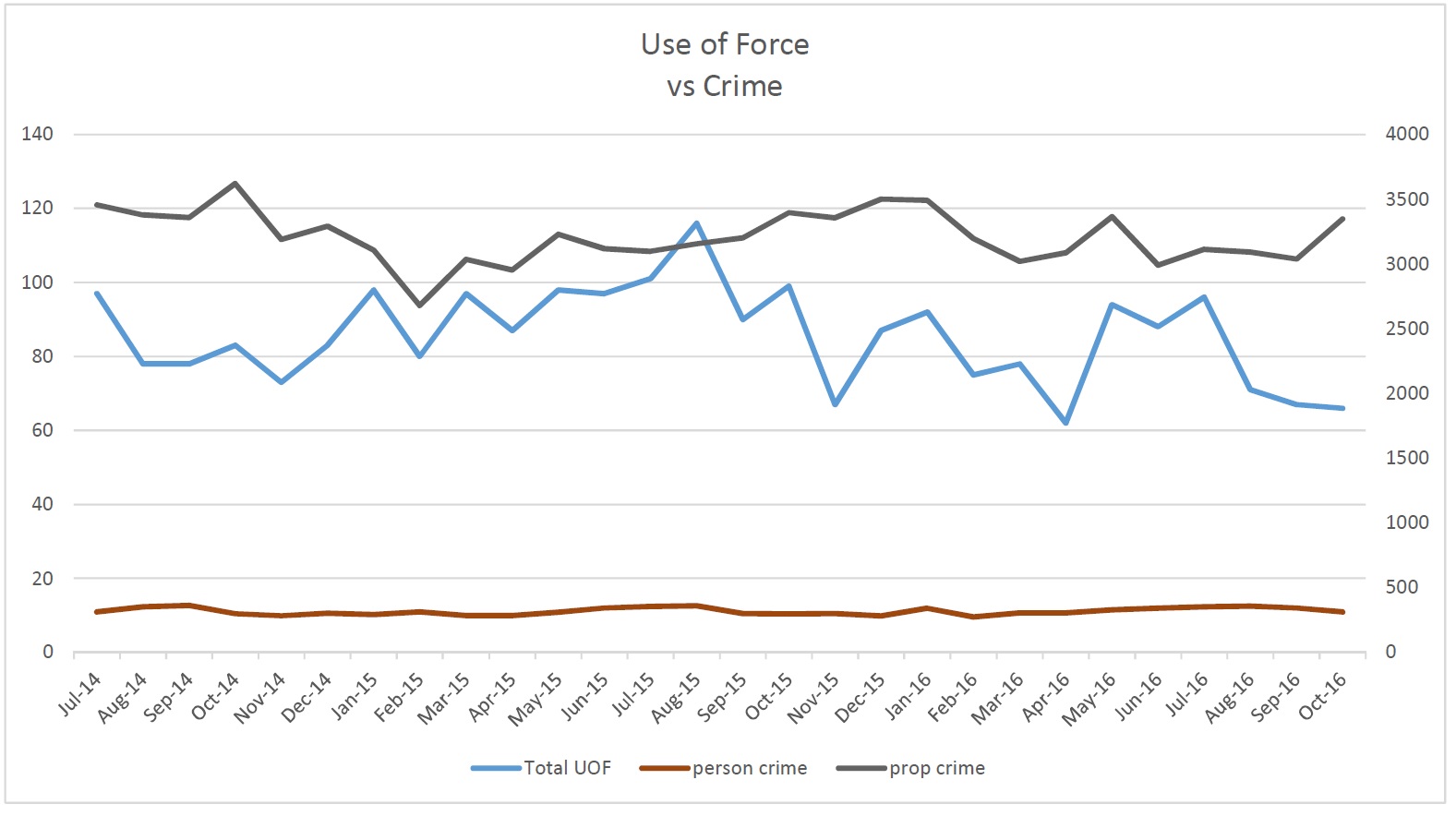 The monitor’s findings are unequivocal:

The Monitor concludes that officers, in an overwhelming majority of instances, are affirmatively and actively implementing the requirements of, and principles embodied in, the Consent Decree and SPD’s revised force policy. Indeed, officer force appeared necessary, proportional, and objectively reasonable under the circumstances – with a number of incidents featuring superior examples of officers strategically de-escalating situations in order to minimize the nature of the threat while potentially mitigating the severity of force that needed to be used.

Specifically, in the latter, 14-month half of the 28-month study period, more than 99 percent (99.27 percent) of force used was consistent with SPD policy…  Focusing only on intermediate-level
Type II and serious Type III force from the more-recent 14-month period, which is analogous to the moderate and serious uses of force identified and analyzed for numerical purposes in the 2011 DOJ investigation, nearly 96 percent (95.7 percent) were consistent with SPD policy.

Further, where officer force was contrary to policy, SPD’s internal mechanisms for critical self analysis and review are regularly identifying them as such. Indeed, in every case that it determined officers to have not complied with SPD’s use of force policy during the later half of the study period, the Force Review Board identified the force as out of policy.

The monitor does detail several cases where excessive force was used, as guidance for further work by the department.  It also notes that the monitor’s team is still working on an assessment of SPD’s progress in eliminating discriminatory policing, with a report forthcoming.

Despite that, the monitor has high praise for the department:

The City of Seattle reaching initial compliance with the core provisions of the Consent Decree relating to use of force is a testament to the hard work, dedication, commitment, and performance of many over an extended period of time. Chief Kathleen O’Toole, and her command staff, have worked tirelessly since she became chief in June 2014 to implement comprehensively the force related provisions of the Consent Decree. Her constant promotion of the new use of force policies as good for the men and women of the police department and the Seattle community has done much to cultivate buy-in and ongoing application by the rank and file. In the same vein, Mayor Ed Murray has been an unstinting champion of new approaches and robust training for officers on force – emphasizing the importance of de-escalation, the professonal development of police officers, and the ongoing strengthening of ties between SPD and the diverse communities that the Department serves.
However, the credit for this major milestone goes first and foremost to the men and women of the Seattle Police Department. This assessment is fundamentally an analysis of their performance over time. Their ability to meaningfully and effectively implement the use of force policies and apply the related use of force training on the streets of Seattle – while facing the unpredictable challenges that are part and parcel of law enforcement – is worthy of substantial praise. The Monitoring Team’s respect for the many committed professionals who serve, protect, and partner with the community to solve problems and make Seattle a place for all to live, work, and play is unwavering – but burnished all the more by the  demonstration of strong trends and good performance. As this report elsewhere makes clear, police officers in Seattle are frequently tasked with addressing individuals and situations that the rest of the social service fabric has failed, left out, or left behind. Their ability to innovate, change approaches, and change the course of the Department while addressing these fundamental duties is commended.

Kudos to SPD for making so much progress. I hope they keep at it; there’s more work to do before anyone declares success.