Last Wednesday the City Council got another monthly update on the city’s short-term response to the homelessness crisis.

It’s important to point out that this was not a report on “Pathways Home,” the city’s long-term response to homelessness. That is still being rolled out, and the first significant actions won’t happen until this summer. Rather, this is a report on “Bridging the Gap,” the set of short-term measures that are being taken to deal with the 3000+ homeless people living in Seattle today while we wait for the long-term response to kick in. Pathways Home is intended to reduce homelessness, while Bridging the Gap is an effort to reduce the pain felt by those who are homeless and the community as a whole in the meantime.

For the past several months, the homeless response has felt like a series of promises made: better shelters, more compassionate protocols for clearing unsanctioned encampments, cleaning up trash and needles, better execution. But the tone is changing; this month the report from the city shifted from talking about the things they will be doing to the things they are actually doing, and the results that are being seen. It’s also becoming clear that the various pieces of the response are fitting together better.

The Navigation Team is up and running at full strength. In the past eight weeks, it has made contacts with 291 individuals, and referred 116 of them to safer living situations. Every morning at 8am the team heads out with an up-to-date list of available shelters and other programs for which spaces have been reserved for the Navigation Team members to offer to people who are homeless. 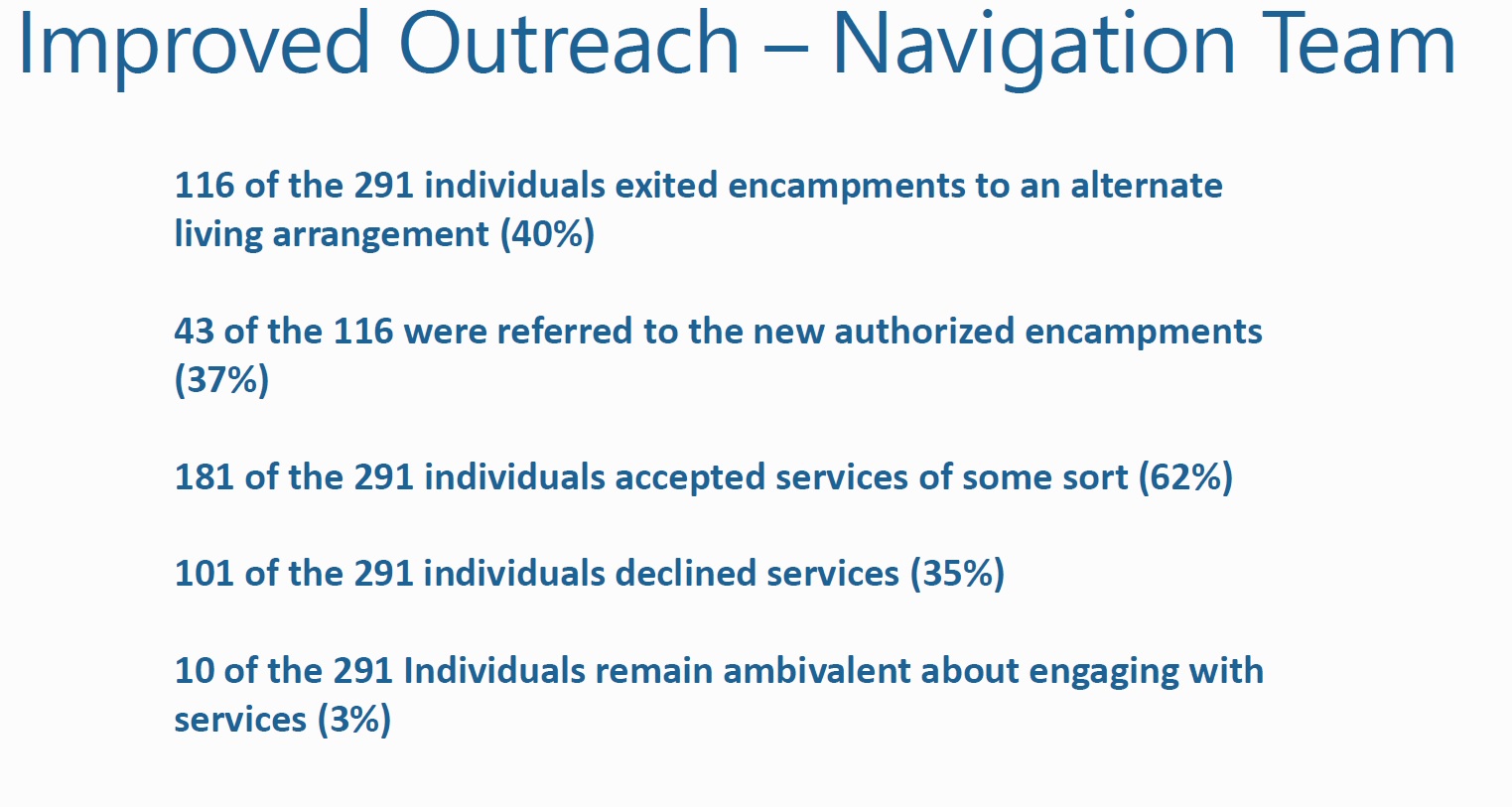 New options for safer living situations are opening up. The three new sanctioned encampments are open (even as they are still finishing up installation of tiny homes) and filling up rapidly. 43 of the 116 people referred by the Navigation Team relocated into the new encampments. Also, the Navigation Center shelter is making progress: they are working with the providers on protocols and housing options, while the city continues to build out the facility. They are holding one more community information session next week, and the center is expected to open this summer. 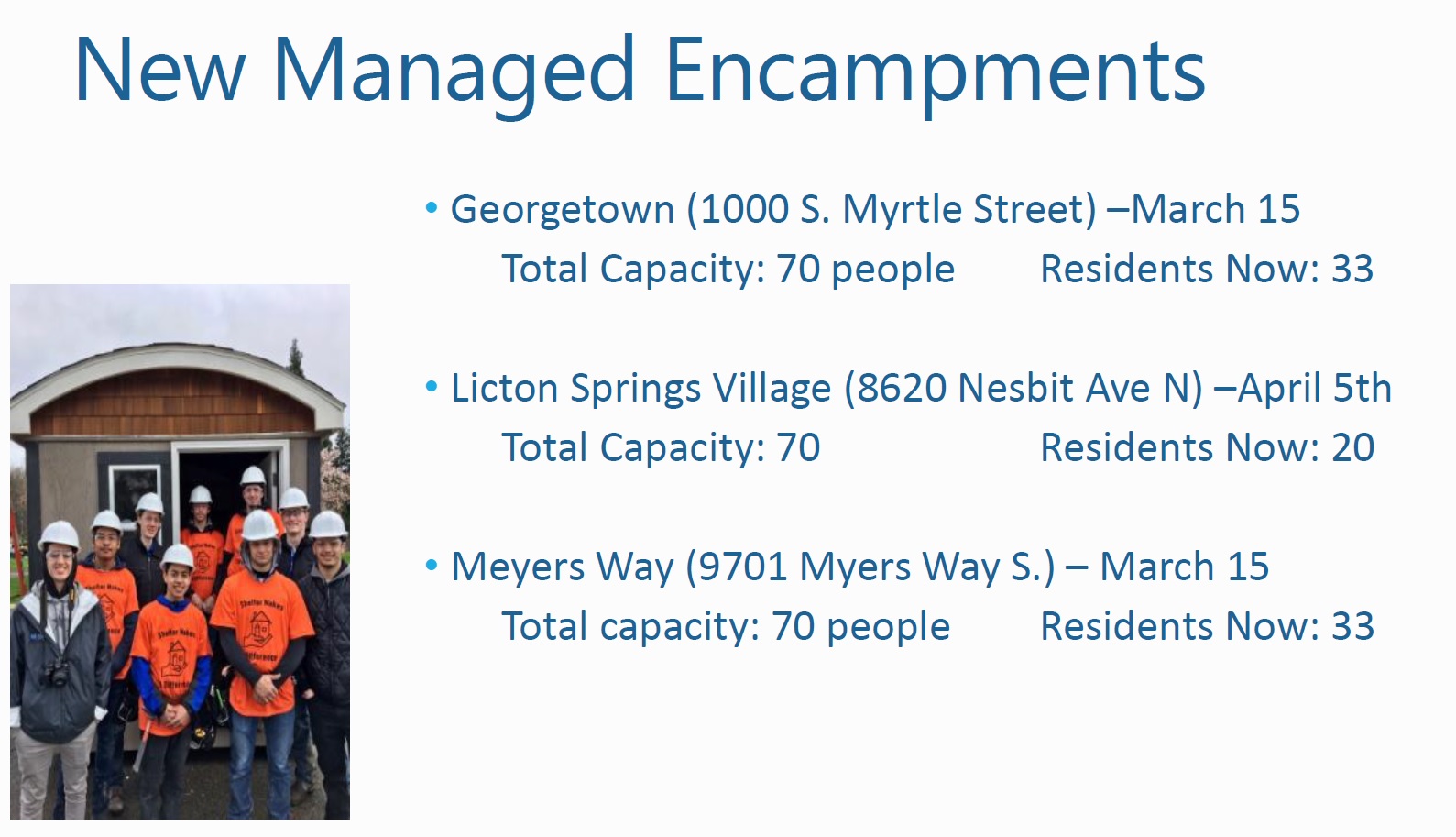 The Human Services Department (HSD) also announced last week that it is granting $1.3 million to Compass Housing for a new 24-hour, low-barrier shelter at the First Presbyterian Church in the First Hill neighborhood, which should also open this summer.

The city’s revised protocols for clearing unsanctioned encampments have been finalized and adopted by city staff. This follows a public comment period earlier this year. According to the city, they made four important changes to the protocols based on public feedback:

Now that the new protocols have launched, the city has also begun delivering personal belongings back to people, so that rather than come down to the city’s storage facility, people just need to call a phone number and arrange a time and a reasonable, safe place for delivery.

The city is preparing to stand up the Implementation Advisory Committee to provide ongoing feedback on the encampment removal protocols and how faithfully the city’s staff are implementing them. 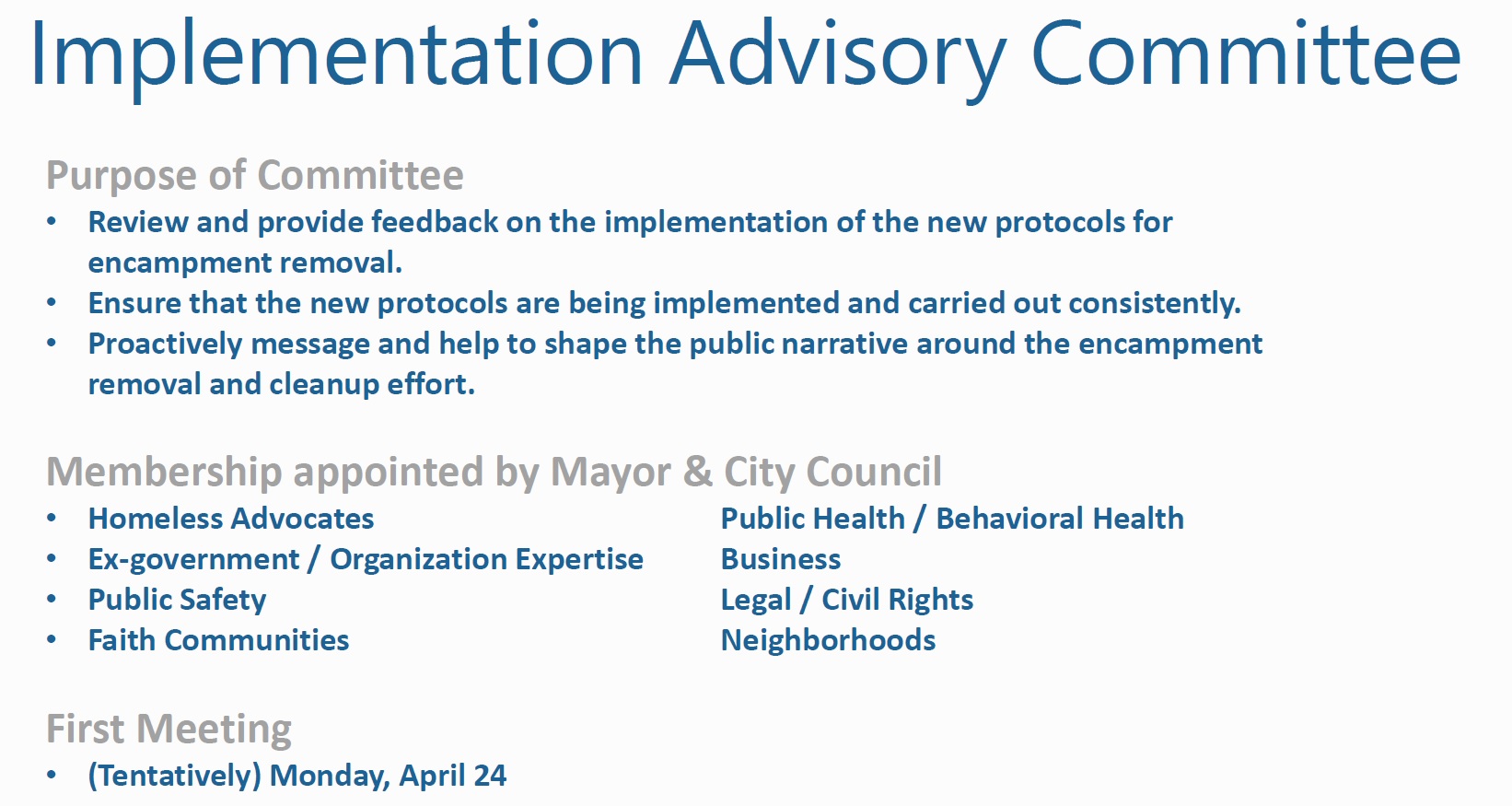 Waste pickup efforts have escalated. In the last eight weeks, the city has removed over 1600 tons of waste — including garbage, human waste, and hypodermic needles. The biohazards are a significant safety issue for the city’s employees, so the procedures for cleanups are carefully orchestrated.

In addition, the city continues to expand both scheduled and on-call trash pickups at known unsanctioned encampment sites. It is also expanding it litter abatement pilot to the University District. And its needle collection pilot, with 8 locations across the city, has collected up over 5600 needles to-date.

Finally, the city continues to provide shower facilities to homeless people at community centers and city swimming pools across Seattle.

All this is relatively good news: promises are being kept and things are moving forward. Nevertheless, there are lots of outstanding issues.

First, let’s remember that none of the “Bridging the Gap” work reduces homelessness in any meaningful way — though to be fair, it wasn’t intended to. Having the Navigation Team take the lead on outreach may slightly improve the efficiency of getting people off the streets and into better, safer situations: shelters, treatment programs, etc. But for the most part, that wasn’t a first-order problem; the big problem has been lack of capacity for shelter, housing and treatment programs. Part of the Navigation Team’s success to-date has been that it has exclusive access to added capacity as it came online, most notably the new sanctioned encampments. When those are full — which will happen very soon — then the resources they have to make a variety of meaningful offers of person-centered shelter and programs are limited.

Also, we still don’t know how big the problem is. The results of this year’s One Night Count still haven’t been published, so we don’t know what has happened to the local homeless population over the past year. We also still don’t have a real “gap analysis” that tells us how much capacity we need for various forms of housing (transitional housing, rapid rehousing, permanent supportive housing, etc.) and for mental health and substance abuse treatment programs.

And as Council President Harrell pointed out in the meeting last week, we don’t know how much trash is still out there needing to be cleaned up. The conventional wisdom is that Americans generate an average of 4.5 pounds of garbage a day. For 3000 homeless people, that would be 6.75 tons per day, or almost 2500 tons per year. One can easily imagine that homeless people, without the financial resources of typical Americans, generate less than that; if it were half that rate, they would still make 1250 tons per year.

According to the map above, the vast majority of the 1600 tons of garbage collected came from eight of the largest unsanctioned encampment sites. That’s a good start, but there are altogether more than 400 unsanctioned encampments around the city: smaller, more dispersed, and more challenging to access, which will make cleanup far more difficult. If each of those sites had 1 ton of garbage (a VERY high estimate, most are 1-3 tents) that would be about 400 tons of garbage out there.

That sounds like good news; at the current rate, it ought to be all cleaned up in another two weeks. But there are two reasons not to celebrate just yet. First, they tackled the larger sites first (in fact, 1200 tons came from a single site: Royal Brougham and Airport Way), which is a fairly efficient operation. As they work their way down the list, the rate of cleanup will slow. Second, the 3000 homeless people in the city are still generating garbage even as the city is cleaning up the existing accumulation. In the eight weeks it took the city to clean up 1600 tons, they generated between 200 and 400 tons more.  Even when the cleanup pace slows the city shouldn’t fall further behind, but don’t expect a pristine city a month from now. And as long as we still have a large homeless population the garbage cleanup work will be ongoing.

Another ongoing problem is how well the city can continue to deliver faithfully on its promises. The protocols for clearing homeless encampments needed revision, but part of the problem has also been (as reported frequently) the lack of adherence to those protocols. Two things weigh in the city’s favor this time: heavier reliance on the Navigation Team, a group trained and practiced on the protocols; and the new Implementation Advisory Committee to give the city regular feedback on how it’s doing.

Assuming that goes well and the city executes flawlessly on the new protocols, the ongoing conversation about how to deal with the homelessness crisis will begin to shift — starting with the so-called “sweeps” of unsanctioned encampments. The city is increasingly finding itself ready to make meaningful offers of shelter and/or services to a certain number of homeless people, and according to its staff is being more deliberate in its focus on the most problematic unsanctioned encampments. If they limit their clearing activities to within their capacity to make meaningful offers, then they have directly addressed the primary critique of “sweeps,” that they inhumanely push homeless people around the city. But here’s the catch: many of the homeless people are still refusing those meaningful offers of services. Some say “no” because of negative past experiences with shelters or lack of trust in a system that has repeatedly failed them; some are still dealing with various forms of trauma and are not ready to accept offers; a very small number simply choose to live outside. But if the city can make meaningful offers, and if they can do that consistently (both big if’s), then as a community how do we respond when people refuse to accept?

Case in point: last week’s clearing of the Spokane Street encampment. According to the city, the Navigation Team made contact with all 38 residents and made meaningful offers. 61% accepted some form of service; 21% moved to a safer living arrangement. For those living in vehicles, the city assisted in repairs where necessary to get them moving again (or at least moved out of the Spokane Street viaduct median). One person accepted entry into a long-term inpatient substance abuse treatment program. And yet, several people refused services and moved on to another unsanctioned location in the city. There were accusations that the city violated its protocol by moving too quickly to clear it without sufficient notification, though the city claims that the recent fire at the site proved that it was an imminent danger and needed to be cleared quickly. And yet, at the end of the day (if the city is to be believed) everyone received meaningful offers of relocation to a safer location and other services before the site was cleared.

Assuming the city can keep its promises, our conversations about the short-term response to the homelessness crisis are going to get tougher. The easy objections to “sweeps” are about to become non-issues. What remains are the less factual, more ideological questions around how we treat people who don’t trust the system, or simply refuse to be a part of it, after it has failed them. And until the Pathways Home plan (hopefully) makes real inroads towards addressing the underlying causes of homelessness, we’re going to be having this conversation frequently.