The city’s Incentive Zoning program has its roots in the 1970’s and has grown and changed much in the decades since then. Today it’s co-managed by the Seattle Department of Construction and Inspections (SDCI) and the Office of Housing (OH). Last year, Council member O’Brien asked the City Auditor to verify whether the city was accurately applying the IZ land use code to projects that opted into the program. They found a long list of issues and made 22 recommendations for improvements to the program. This morning, the City Council was briefed on the findings.

Here are relevant documents that are worth perusing:

A quick history of IZ, excerpted from the auditor’s report:

Incentive zoning in Seattle dates to the 1970s, when it was offered to downtown commercial projects in exchange for public amenities, such as public open space. In 1985, the City established a Housing Bonus program to grant additional development rights to office developers in exchange for the production of downtown housing. In the 2000s the program for affordable housing expanded to include different types of projects, such as mid-rise and high-rise projects, and in different areas of the city, such as South Lake Union. In 2011, the program was expanded to urban villages and other areas of the city.

That description ends with a very prescient statement:

Implementing these multiple code changes over time has resulted in a very complex, and at times inconsistent Land Use Code as it relates to Incentive Zoning for affordable housing.

SDCI and OH administer different parts of the IZ program, and developers are required to work with both departments. SDCI handles the building plans, and OH negotiates the affordable housing agreements.

The auditor’s office looked at records for ten years (2006-2015) and interviewed staff, officials, developers and architects. They found numerous problems with the way the program is implemented, which generally fall into three buckets:

First, the collaboration issues. Much of it stemmed from the fact that the Office of Housing staff didn’t have access to the permit-tracking system that SDCI uses, so information is passed back and forth through other means and OH tracks projects in an entirely separate spreadsheet. They didn’t regularly reconcile those lists and the auditor found multiple discrepancies, which sometimes led to the wrong affordable housing requirements being assessed on a project. Also, while OH is responsible for managing payments from developers for affordable housing, SDCI did not consistently verify that the required payment had been received before issuing the final permit for a building. Of the 65 projects that the auditor inspected, one slipped through without making a $3.4 million payment (the auditor brought this to their attention, and they have since rectified this). 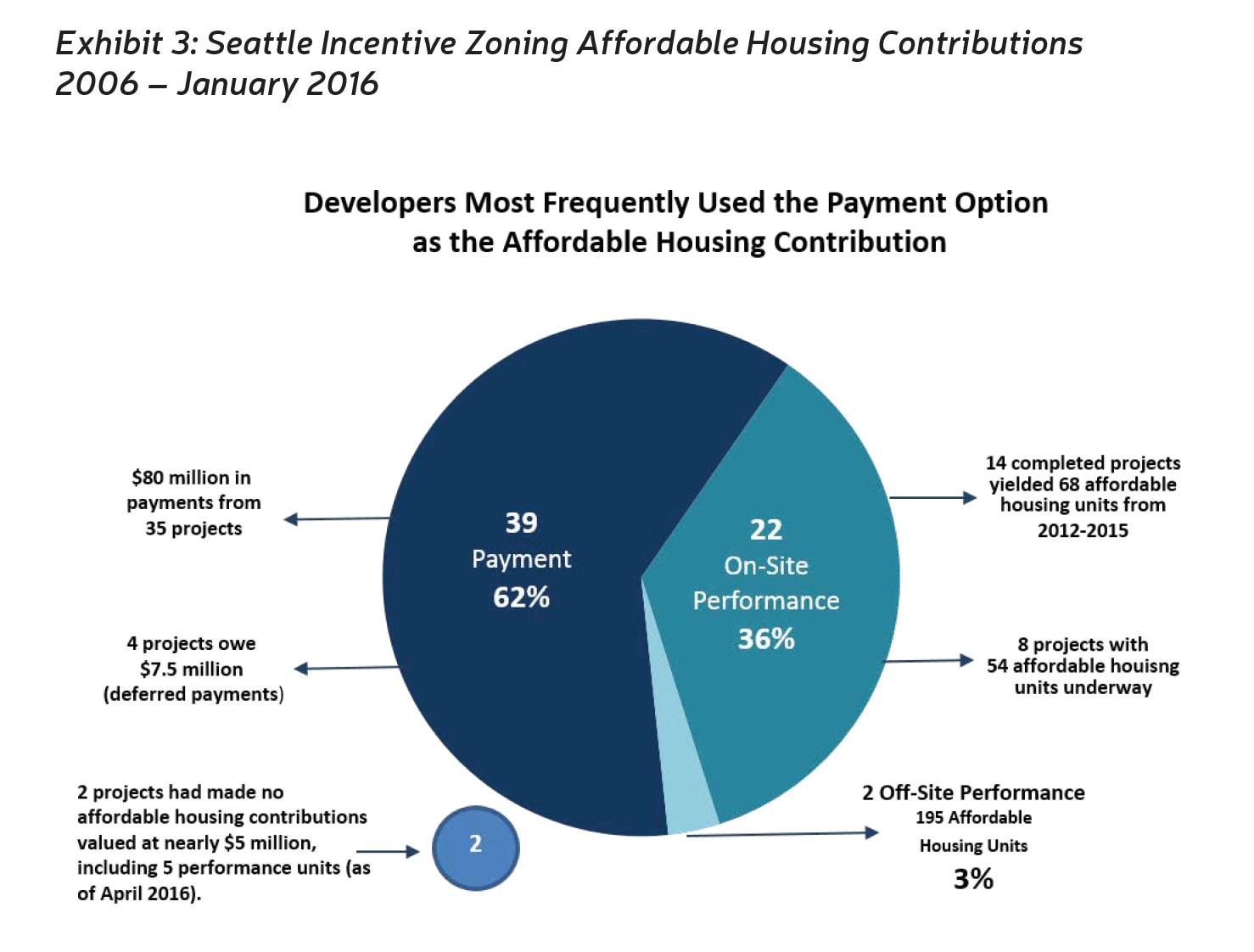 The “sloppy execution” list of problems is much longer, and affects both departments. SDCI had no management framework in place for the program including either a group or individual responsible for:

Let’s just remind ourselves that this program has been in place, in one form or another, OVER THIRTY YEARS. And the auditor found no management framework.

The auditor found draft program procedures that had not been finalized; SDCI and OH each had separate documents that not only were inconsistent, but also didn’t describe the actual IZ process. They also found “insufficient internal controls in Incentive Zoning for affordable housing projects to prevent errors and reduce the risk of fraud… While we did not find evidence of fraud, we found a lack of documentation, errors, and discrepancies”

Also SDCI was not tracking “vesting dates” of projects, which determine which version of the land use code applies to a particular project. They also haven’t charged developers the required $550 application review fee since 2013.

SDCI also had a planner calculate the bonus development capacity granted by IZ without supervision or review by another staff member to ensure accuracy.

OH had its issues too. Top of the list is that OH staff were accepting checks directly from developers, and in some cases depositing them in the city’s bank account themselves, rather than directing developers to send payments to the Finance and Administrative Services department that is supposed to handle all such transactions. To make matters worse, they were scanning copies of checks and keeping them in their project files — creating a privacy risk. Further, several of the OH and SDCI staff who make key decisions regarding financial aspects of projects have not completed the Financial Interest Statement forms the city requires to disclose conflicts of interest. And OH had not been inspecting developments after they open to verify that they were meeting their agreed-to affordable housing requirements.

The auditor’s office faulted both SDCI and OH for insufficient transparency and infrequent reporting. They also have “minimal information or instructions about the application process for the Incentive Zoning program on either the SDCI or the Office of Housing websites,” and they don’t make payment amounts and fees publicly available.

The auditor also faulted the way they adjust fees for inflation; they use the Consumer Price Index, which tracks the cost of consumer goods but does not accurately track housing prices. This morning Council member Johnson encouraged them to adopt Sound Transit’s construction cost index, which tracks costs in the Puget Sound area.

The auditors also had their share of criticism for faults in the land use code itself, which is the responsibility of the City Council. There was a long discussion about the fact that SDCI and OH currently calculate IZ capacity bonuses and requirements based on information available early in the permitting process rather than the final plans. A typical large development process involves a sequence of permits:

The land use code requires that affordable housing payments must be made before issuing the first permit. There are two problems with this: first, while at the time a MUP is issued the size of the building is approximately known, it isn’t finalized until the superstructure permit is applied for. Second, in practice many developers obtain the MUP as a tool to approach investors to fund the construction phase of the project; that means they don’t have the money to make a large payment when they obtain the MUP. It’s also the case that many projects never make it past the MUP phase, and the time it takes them to get from MUP to construction can be months or even years depending on the economic climate, so asking them to make a large payment up-front is a severe hardship on developers and breaks their business model. In practice, SDCI and the Office of Housing have been requiring payment before the final permit rather than the first one, but that practice is inconsistent with the (unworkable) letter of the law.

The auditor’s office recommended several other changes to the land use code to address the permit revision process, recording declarations for the affordable housing requirements for every IZ project, mandating the index of inflation that should be used to adjust fees and payments, and several other issues.

The response of SDCI and OH to the auditor’s report is a bit defensive. In some cases it’s warranted; the land use code is a mess and they were doing their best to make it work. They also pointed out that out of a total of 54,000 construction permits handled by SDCI between 2006 and 2015, only 65 had IZ components — and the auditors only found serious issues with two of them, giving them what they claim is a 92% success rate. On the other hand, the auditor didn’t look at the other 53,935 permits, and if the work on the 65 they examined was this sloppy, one can only imagine the problems that lurk in that collection. Even if 92% are fine, that’s still 4,300 permit application with problems…

They do admit some of their problems, to their credit. They looked into the case of the missing $3.4 million payment; here’s what they found:

What we learned from the system information and the timing of approvals is that one of our senior planners performed the review of the project. The plan documentation included calculations for the required affordable housing payment, which is normally collected just prior to permit issuance. At the time the plans were approved by all other review locations, the senior planner was on an extended medical leave. Another reviewer, unfamiliar with the project was asked to finish the review, and because there were no notes in the system that clearly indicated the housing payments were required prior to issuance, the second reviewer inadvertently approved the project. This situation highlights to SDCI the importance of clear documentation and procedures which might have helped to avert this oversight.

It also highlights the importance of other issues the auditors raised: keeping complete information, and having supervision and secondary reviews so that the system isn’t dependent on one person doing everything right (and staying healthy).

SDCI and OH have already begun working on adopting some of the auditor’s recommendations. They are in the process of deploying a new permit tracking system which SDCI and OH can use jointly and which is intended to do a better job of tracking all the necessary information for implementing the IZ program (and the new MHA program being rolled out now). SDCI has also hired a new person to provide secondary reviews on IZ processing, and OH is expanding to meet its obligation to inspect and verify affordable housing performance requirements. They are working on a new website where they can post more complete information on the IZ program and on pending and approved permits so developers and the public in general can have better visibility into the program. Council member O’Brien suggested that it would be very helpful to have the city place the IZ information into the Shaping Seattle map site (and make it available to the privately-run Seattle in Progress site too), including details about not just where affordable housing payments are collected, but where the funds are being spent as well to help dispel the myth that the money isn’t being reinvested back into the communities where it is raised.

But there are still lots of holes in their workplan. Worse, they are already sounding the alarm on the MHA program being rolled out now, which will significantly ramp up their workload. Some of the procedural issues with IZ have been addressed in the MHA legislation, but have not yet been rolled over into the IZ program; the Council will need to look into that as well.

The Council asked for another update on implementing the auditor’s recommendations next fall at the beginning of the budget process so they can use the information to plan for any additional needs in SDCI and OH related to the Incentive Zoning and MHA programs.

Once again, the auditor’s office has done amazing work in thoroughly reviewing a government program and bringing to light important issues. What is sad, though, is the lack of accountability in our city government. It’s hard to hold this City Council accountable for confusing legislation written and rewritten several times over by their predecessors, and we certainly need to cut SDCI and OH some slack for the challenge of trying to implement a confusing law, but the lack of a management framework, oversight, supervision, review, and transparency in the two departments is inexcusable, particularly for a program that has been around for over thirty years. And yet, no one seems to be held accountable for that failure.

Nor is the Council asking the obvious follow-up question: if a program that affected just 65 applications over ten years was run that poorly, why would we believe that their process is any better for the other 54,000 permits they processed?