Since the beginning of the year, MHA upzones have been approved for the University District and the Downtown/South Lake Union areas of the city. Now the third piece is up for consideration: the Chinatown/International District (CID).

The CID was split out from the downtown upzone because of some unique characteristics of the area, which also inform important details of the rezone proposal. Let’s start with the demographics of the CID population, as described in the OPCD Director’s Report on the proposal:

The Chinatown/International District represents a regional cultural and commercial hub for the Asian-American community. Most floor area in the area is used for commercial purposes. In particular, the Chinatown/International District contains a diverse variety of retail, food, and other business. As of 2010, the area had a residential population of 3,466 people (about 0.6% of the city as a whole). This population is significantly more diverse, lower-income, and older than the population of Seattle as a whole. 56.9% of residents identified as Asian, compared to 13.8% citywide. 95% of the area population are renters with an average household size of 1.44 people (compared to 2.06 citywide) and a medium age of 52 (compared to 35 citywide). Information for the Community Reporting Area, which also includes part of Pioneer Square, found that 40.6% of residents were living below the federal Poverty Line, compared to 15% citywide (Source: Seattle Neighborhood Portal). The Seattle 2035 Growth and Equity Analysis identified the Chinatown/International District as an area with high displacement risk and high access to opportunity.

And yet, when OPCD analyzed the area, it concluded that the risk of displacement from an MHA upzone was very low.

This study identified only 4 residential units in structures that we considered potentially redevelopable. This outcome is due to the presence of the Chinatown/International District National Historic District which results in protections for many historic structures as well as the significant number of buildings that are owned and operated by local non-profits.

Time to look at the map to see what’s going on here. 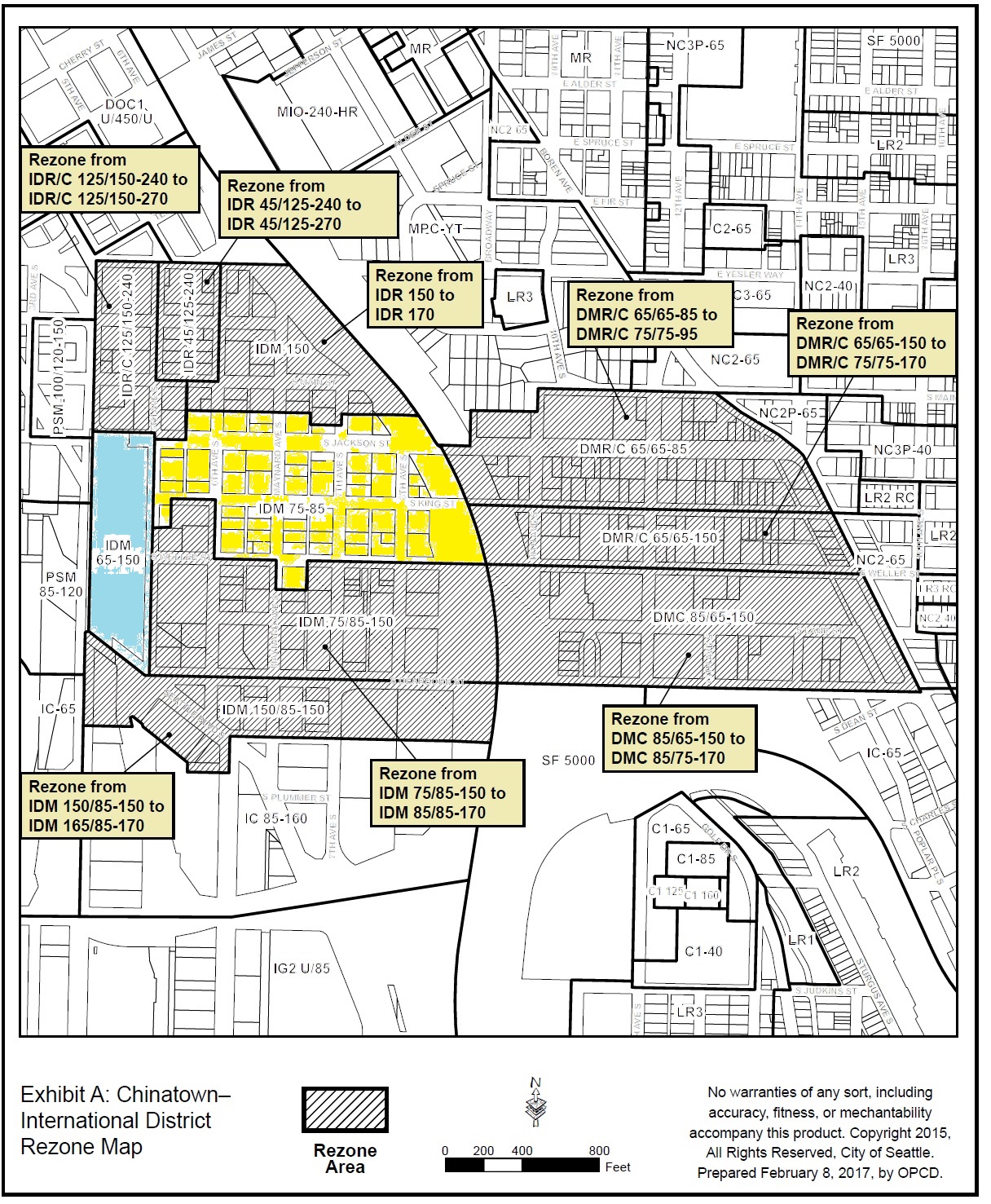 The yellow region is the National Historic District. The blue area is “subject to specific planned community development regulations and is already built out.” Both areas are excluded from the upzone.

On top of that, the remaining area was rezoned in 2011, adding an additional 10 feet that must be earned through participation in the city’s Incentive Zoning program.  So the proposed MHA rezone excludes the area with the highest displacement risk from redevelopment, and is a minor update everywhere else.

As part of preparing the proposal, the city did extensive public engagement with the local community. Here’s what they heard:

That feedback let to the exemption of the historic district, as well as changing the plan for extra capacity to add height instead of width.

According to city officials, they added the minimum meaningful capacity they could that would activate the program. For commercial buildings they increased floor area, though it can only be utilized on upper floors so street level won’t fill in more. For residential buildings they added height:

They made a few more tweaks to the rules, mostly to incent new buildings that match the existing character of traditional buildings in the area: wood-frame 85 feet tall or less. Building taller buildings usually requires steel and concrete, so they found ways to add the required development capacity without necessarily forcing taller construction above the “steel and concrete” threshold height.

In return, the MHA program requires developers to set aside a certain percentage of residential units for sale or rent at affordable prices, or to make a payment in lieu of performing the set-aside. By law, the performance and payment options can’t exceed the value of the additional development capacity, so after a series of complicated calculations, the city arrives at recommended requirements for commercial/mixed and residential buildings:

It’s mostly uniform throughout the rezone area; the two exceptions are zones in the northwest and south/southwest corner of the region, which  have greater height limits and are adjacent to the light rail station and thus more valuable property.

The city predicts that the upzone will result in 150 affordable housing units over ten years. There will be displacement too, though the city believes that will happen independent of whether the upzone happens:

A similar effect is likely for retail commercial space:

The analysis also looked at existing low-cost retail districts which help to anchor existing cultural communities to the area. Since this proposal would not impact property in the IDM-75-85, which represents the area of the National Historic District, it is not likely to have a significant impact on this core business district. Outside of this area, development that is anticipated with or without this proposal could reduce the amount of low-cost retail space in these areas which could indirectly encourage displacement if it reduces the amount of specialized retail serving the community. At the same time, additional residential development could also help provide additional customers for local businesses. Overall, the proposal is not likely to have significant impact in commercial displacement as it is not likely to increase demolition.

On balance, the city’s conclusion is that the MHA upzone will reduce displacement, given the new market-rate and affordable housing units. the exemption of the zones where most of the existing residential housing is, the low number of units on redevelopable building sites, and the fact that redevelopment of several sites was going to happen one way or the other.

In case you’re interested, here’s what could be charged in rent for the affordable units created through the MHA program requirements:

And here is what it takes to qualify to rent one of those units: 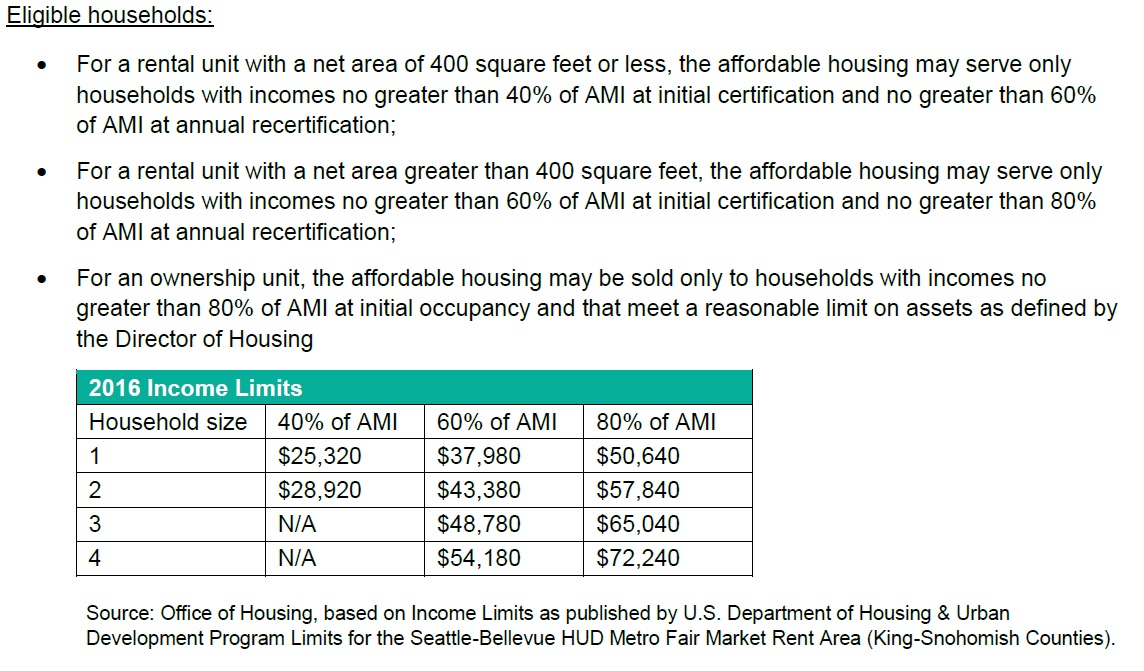 The Planning, Land Use and Zoning Committee will take up the CID upzone proposal Tuesday morning. Committee chair Rob Johnson hopes to vote it out of committee in late May or early June.