The Mayor has proposed a new sales tax on sugary beverages. In the Council’s first discussion on the new tax, it quickly became clear that there is significant disagreement on one big issue: how to spend the proceeds.

In Wednesday’s Affordable Housing, Neighborhoods and Finance Committee, David Mendoza from the Mayor’s Office gave a presentation that highlighted the general contours of the proposed tax: 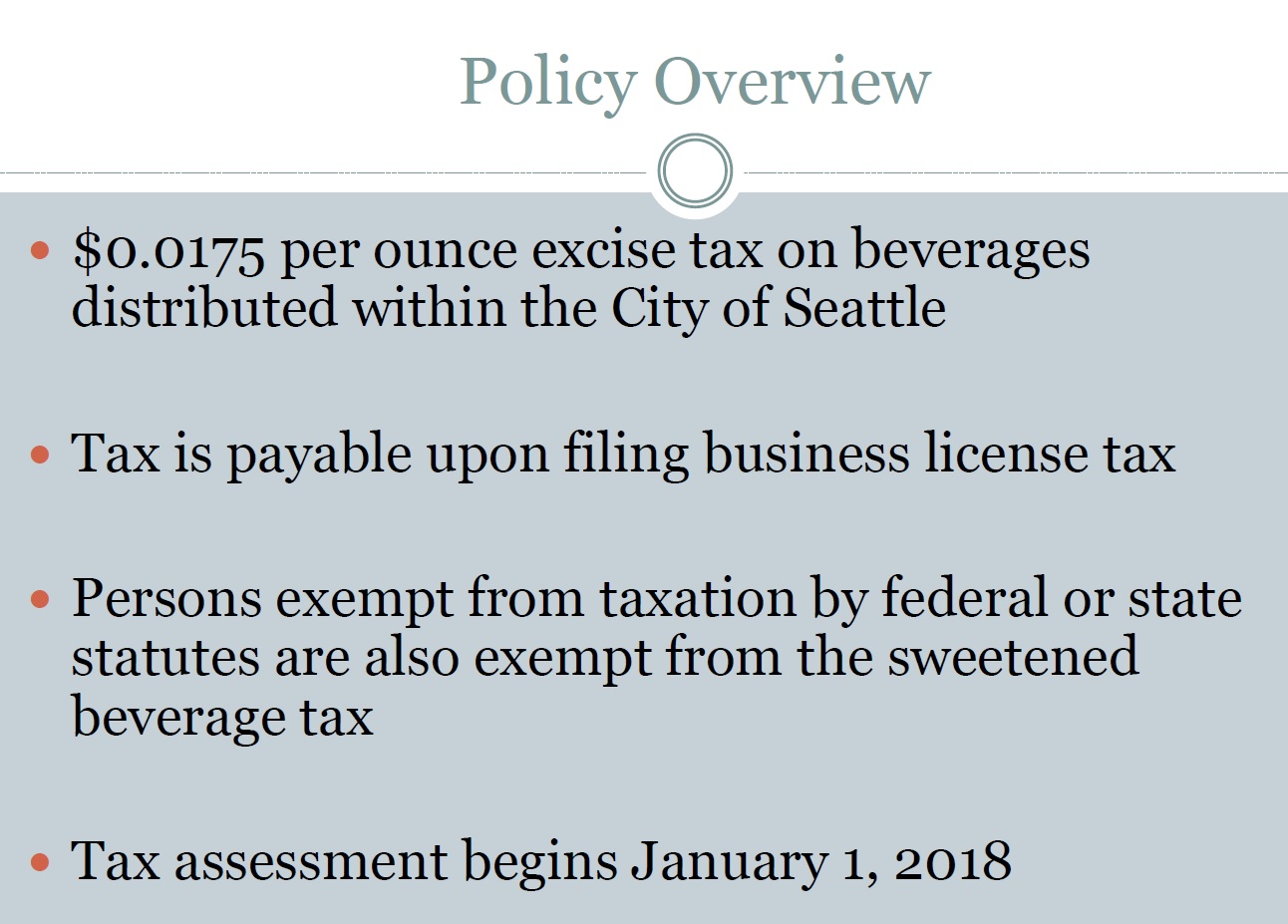 Mendoza also gave a report on the city’s use of the Racial Equity Toolkit to evaluate the impact of the soda tax on disadvantaged communities. The results were somewhat mixed. On the bright side, beverage industry spending is disproportionately targeted at communities of color, resulting in higher consumption and worse health outcomes, so a soda tax that reduces consumption of unhealthy beverages will have a positive outcome for those communities. On the other side, however, soda taxes are known to be regressive and the cost will likely be passed from distributor to consumer so low-income residents and people of color, who are more likely to drink sweetened beverages, will shoulder more of the tax burden. Also, small businesses are concerned about whether increased prices will decrease their sales, and the beverage industry has tried to argue that the tax will decrease employment in their industry (though there isn’t yet evidence to support that since soda taxes haven’t been in place anywhere for very long). Based on the Racial Equity Toolkit results, the city modified its plan in two ways: it extended the original proposal to also include artificially sweetened beverages (which richer, white people are more likely to drink and which also have health concerns) to spread the tax burden, and to reduce the tax rate from 2 cents per ounce to 1.75 cents.

There wasn’t much debate on those points, though Council member O’Brien asked for more analysis on whether beverages sweetened with Stevia should be exempted since many diabetics believe it’s a healthy alternative that doesn’t affect blood sugar levels like other artificial sweeteners.

The real debate was over how the funds should be used.  According to Mendoza, the Mayor’s primary goal is to address the education/graduation gap among students of color, pairing together recommendations from the education advisory group and from soda tax advocates.  The Mayor’s proposed use of the funds includes twelve potential targets under three broad categories: birth-to-five programs, healthy food access, and K-12 education.  From the bill’s text:

In addition, since the soda tax is expected to be a declining source of revenues (over time soda sales should decrease), the plan will only directly commit 80% of the projected revenues and the use of the remainder will be decided by an oversight committee (proposed to be the Families and Education Levy Oversight Committee).

However, four Council members present at the briefing disagreed with that plan. O’Brien, Herbold, Johnson and Juarez all voiced the view that there needs to be a much stronger nexus between the problem that the source of the funds causes and the using the funds to address that problem. In other words: the money is coming from unhealthy beverages that are known to cause health problems — particularly in poorer communities and communities of color–  so the money should be used to improve access and consumption of healthy food options in those communities.

The four Council members noted that only one of the twelve programs listed in the legislation relates directly to food.

Juarez called it “duplicitous” to have a “war on sugar” and claim to be addressing diabetes, obesity and health, but then to dedicate so little money directly to that purpose. She wanted to see the money go to food banks, food van delivery programs, weekend food backpack programs, and an assessment/study to see in which neighborhoods people are having trouble accessing food. She also wanted to look at whether the city will need to replace funding that the Trump administration is threatening to cut for nutrition services for poor women and children.

Both Juarez and Johnson pointed out that there are “food deserts” in Seattle: neighborhoods with no grocery stores that sell fresh produce and other healthy foods. This is particularly an issue for those with mobility issues, including elderly residents. Johnson named the Magnuson Park area as a specific problem for food access, with 250 people moving in as part of the Mercy Housing project, as well as the Solid Ground project nearby.

Herbold made a comparison to the red-light cameras in school zones: a significant portion of the revenues from red-light camera tickets are directed to pedestrian safety projects. She noted that the public is less angry about getting a camera ticket if they know that it’s not just the city fining them for other purposes; the fine is associated with making the streets more safe.

Mendoza countered that the Mayor disagrees with the notion that because the tax is focused on reducing sugar consumption, the revenues should be entirely spent on food and nutrition programs. He noted that similar taxes around the country have been used to fund a variety of programs. He also said the city’s Fresh Bucks program was an important one, and that the Mayor’s office wants to extend the program to ethnic grocers as well as beyond people on food stamps to other low-income residents. The Mayor believes it would serve a dual purpose: addressing the food access issues, and addressing concerns of small grocers who might lose sales of beverages because of the new tax.

Council member Harrell sided with the Mayor in leaning toward spending the money on educational programs; this is not surprising given that addressing educational disparities within the city’s communities of color has been Harrell’s signature legislative effort. “In all the civil rights work I’m doing,” Harrell said, “I keep seeing that education is the critical need.”

Coincidentally, later the same day Harrell’s Education, Equity and Governance Committee had a briefing on the city’s Education Action Plan, intended to guide investment of funds from both the soda tax and the Families and Education Levy, which comes up for renewal next year. Robert Feldstein of the Mayor’s Office of Policy Innovation asserted that the Governor’s Interagency Council of Health Disparities had found that the best way to improve health outcomes is to improve education, since it benefits in three ways:

Here’s the 2010 policy action plan of the Governor’s council (its most recent). It certainly lists education as one of five priorities (obesity and diabetes is another) with supportive research references, but it doesn’t seem to claim that education is the most impactful one.

As several Council members pointed out in the soda tax discussion, there’s no disagreement that education and food access are not only both tied to health, but also linked to each other: a child eating well will come to school ready to learn, and an educated child will make better eating decisions.  Still, there is clearly a  split among the Council members: one group advocates for using the soda tax to fund food programs and the Families and Education Levy to fund educational equity programs, and another wants to use both taxes to fund educational equity programs with a portion of the soda tax funds spent on food programs. Juarez, Johnson, Herbold and O’Brien as a voting bloc of four have a commanding lead in establishing a majority direction on the Council, with Harrell so far as the lone voice on the other side, and Burgess, Bagshaw, Sawant and Gonzalez unclear on where they stand. It’s also unclear whether the Mayor can be swayed, or whether he might be tempted to veto the soda tax if the Council dramatically shifts the use of the funds away from his stated intent.

Committee Chair Burgess closed the briefing — only the first of several committee discussions on the topic — by noting that while their original intent was to pass the soda tax by early June, they now also have an income tax proposal on their plate. He also suggested that they need to discuss how the Families and Education Levy renewal in 2018 fits into the context of the soda tax since the uses are potentially overlapping.  Burgess listed four issues that will drive ongoing work: