First, here’s how this fits into the overall scheme of MHA.  A year ago, the city passed the “framework” legislation for MHA that specified how the general mechanism would work of adding additional development capacity in exchange for developers either setting aside a certain number of units at affordable prices or paying into a fund to let the city build or preserve affordable housing. Since then, the city has been working through one-by-one specific neighborhoods on how it would be implemented, including the specific zoning changes and what the affordable housing requirements would be. First they did the University District, then downtown and South Lake Union. They are nearly finished with the Chinatown-International District, and just getting started on the 23rd Avenue corridor in the Central Area.

What remains is a large collection of “urban villages” spread across the city, many of which are very small. Rather than define separate legislation for each one, at this point the city will handle all the rest as one large “omnibus” MHA bill. But doing that makes it a large enough change to trigger the state’s requirement for a full Environmental Impact Statement.  The city must draft an EIS, publish it, take public comments, and revise it into a final EIS that can be the basis for the legislation.  The draft EIS was published on June 8th; the public comment period is open until July 23rd. There is no specific timeline for how long it will take the city to address comments and publish a final EIS, but the MHA legislation for those parts of the city can’t go forward until it’s done.

The EIS process requires that the EIS identify and discuss several things, including:

The proposed action is, of course, rolling out the MHA program to urban villages: upzoning within the boundaries of each to allow for taller and/or larger-volume buildings, and adding “performance or payment” affordable housing requirements to all upzoned areas. In a handful of areas, the proposal includes expansion of the boundaries of the urban village to surrounding blocks. The “study area” extends beyond the proposed upzones, because of course upzoning would affect adjoining areas as well. 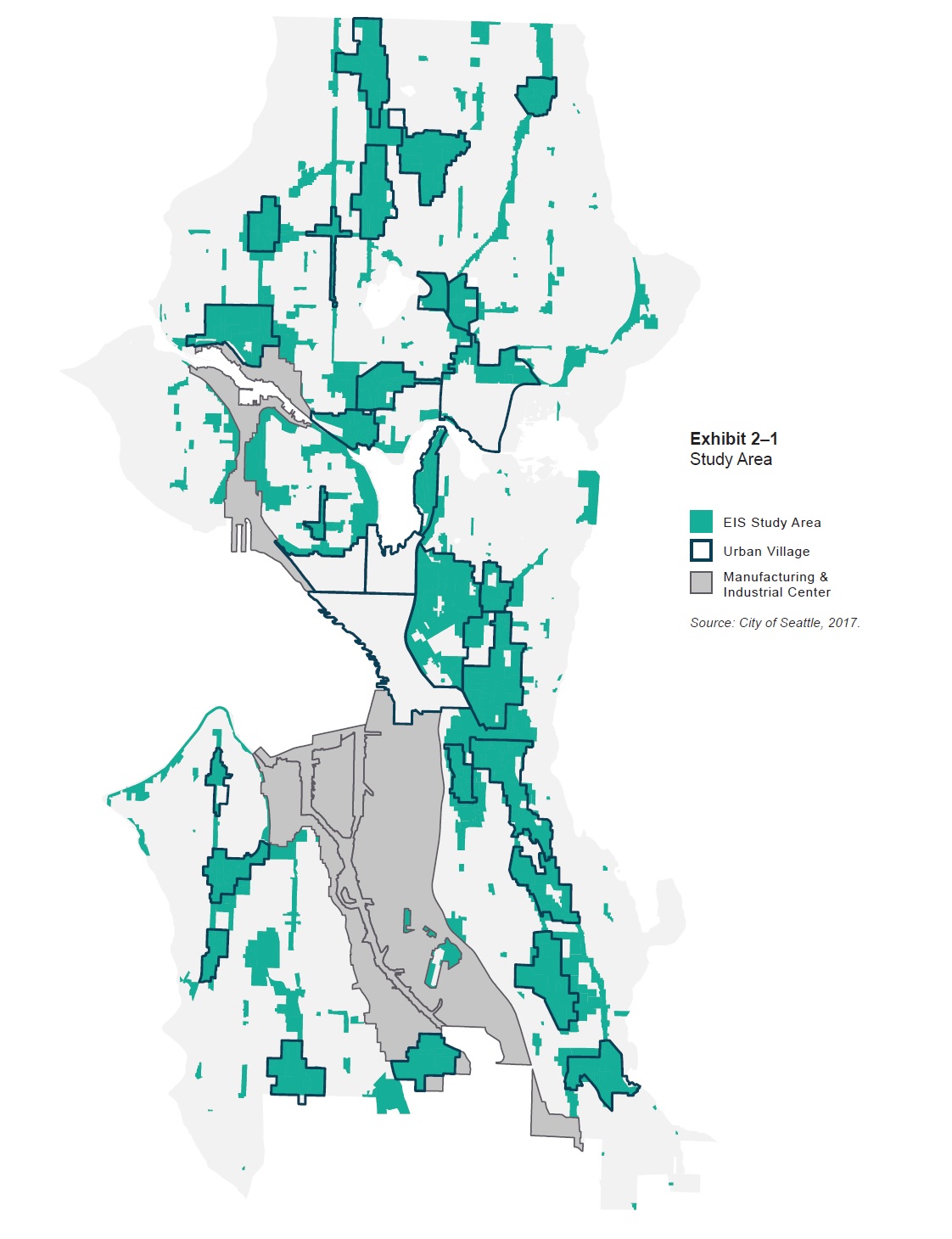 Alternative 1 is useful information because the EIS is trying to predict what will happen over the next 20 years. We know that regardless of whether MHA is implemented, there will be substantial population growth in the Seattle area. That will put pressure on a number of public services and resources: housing, transportation, utilities, open space and parks, aesthetics, air quality, etc. It’s not particularly informative to compare an MHA-implemented Seattle in 2035 with the Seattle of today; it’s much more useful to compare it with the Seattle of 2035 where MHA hasn’t been implemented to understand what difference it will make. That’s what Alternative 1 gives us.

Before we go any further, we need to understand Alternatives 2 and 3, what’s common between them and what’s distinct.

Both alternatives share some common principles for implementing MHA:

The big differences between Alternatives 2 and 3 relate to an assessment of how much risk each neighborhood carries for displacing existing residents because of new development, and how much access to opportunity exists. That analysis was done as part of the city’s Equitable Development Initiative, and was published as an appendix in the draft EIS.  It contains a list of indicators for displacement risk in a neighborhood: 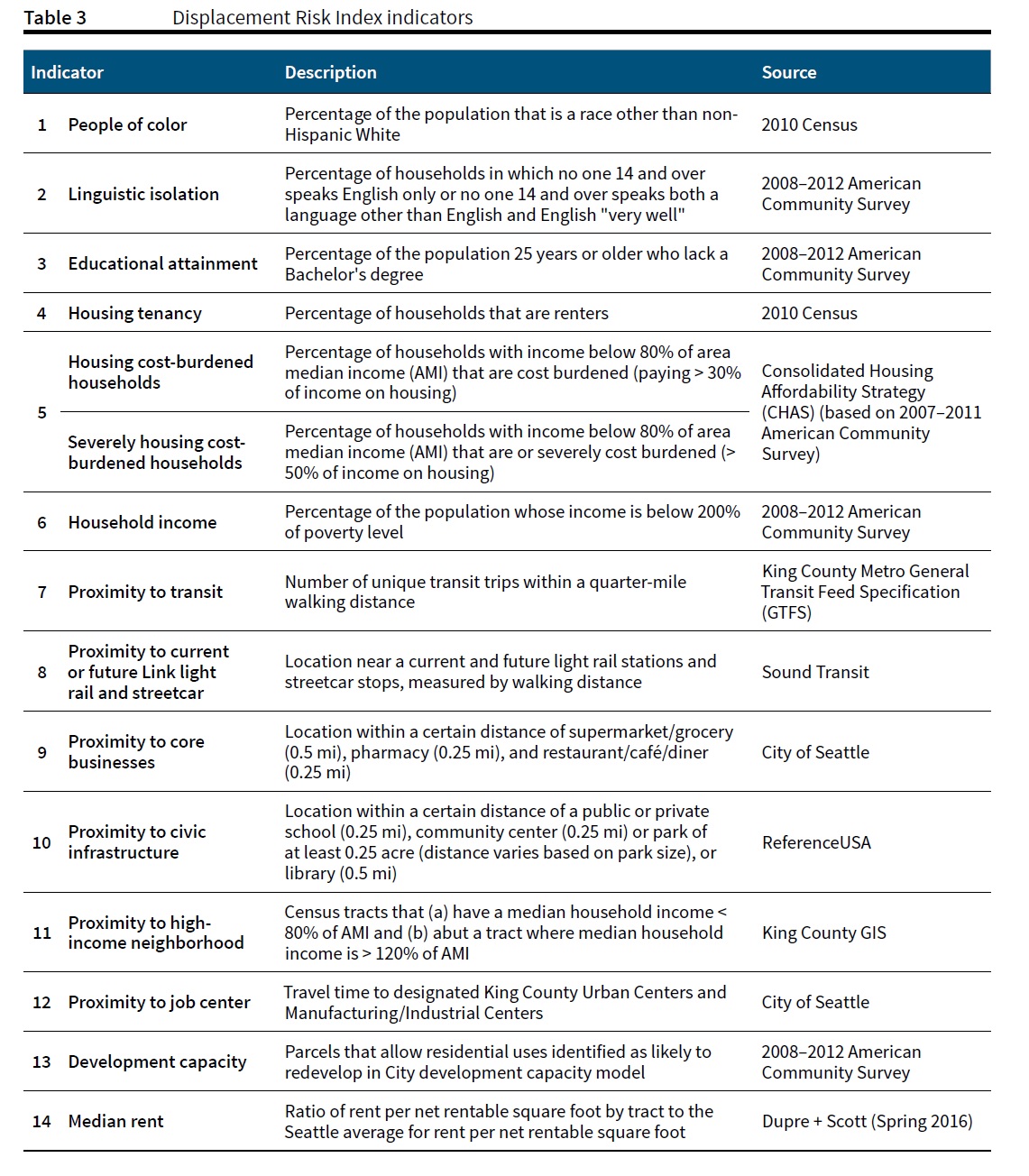 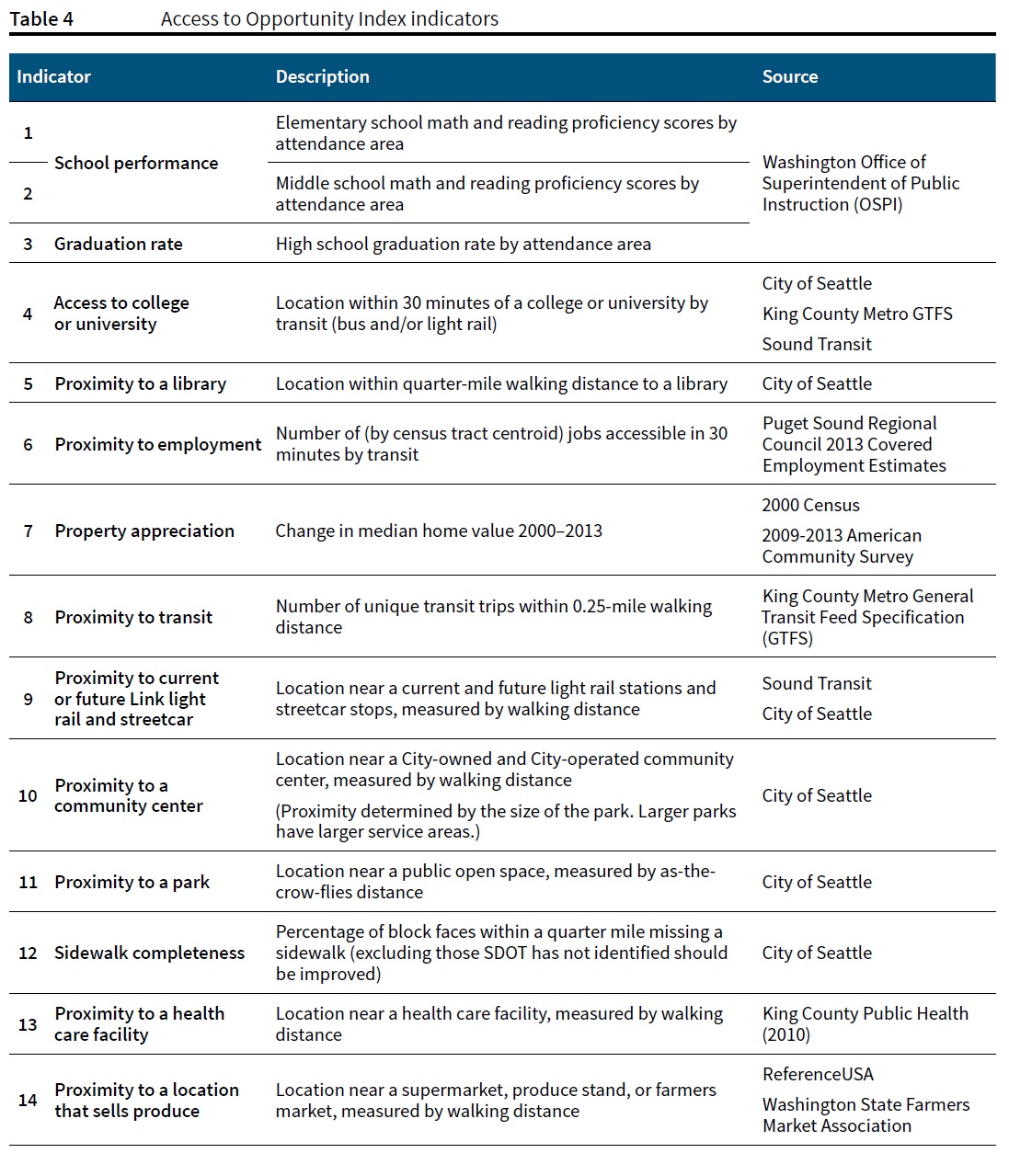 The city assessed each urban village on these two dimensions, and grouped them into one of four quadrants: 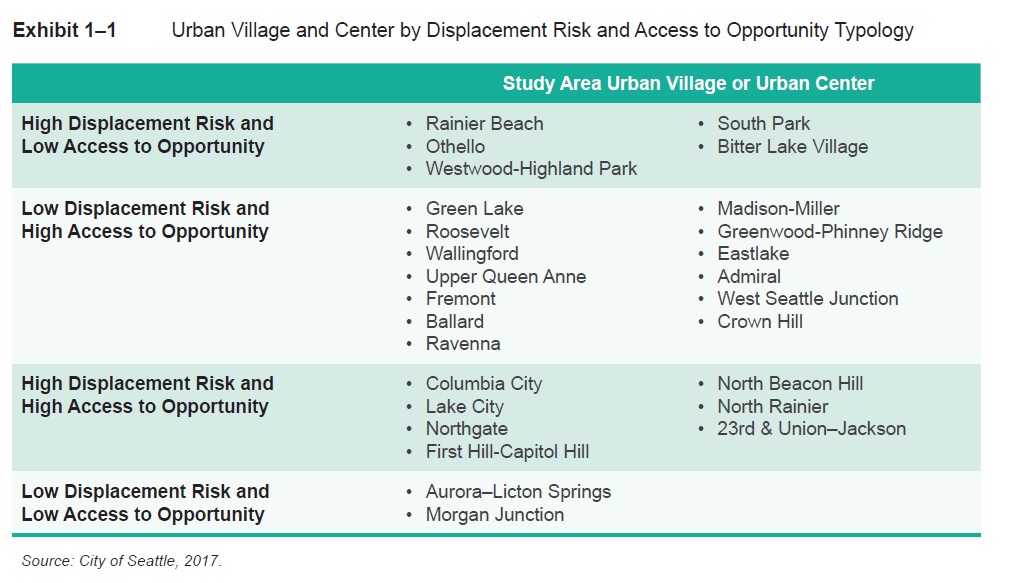 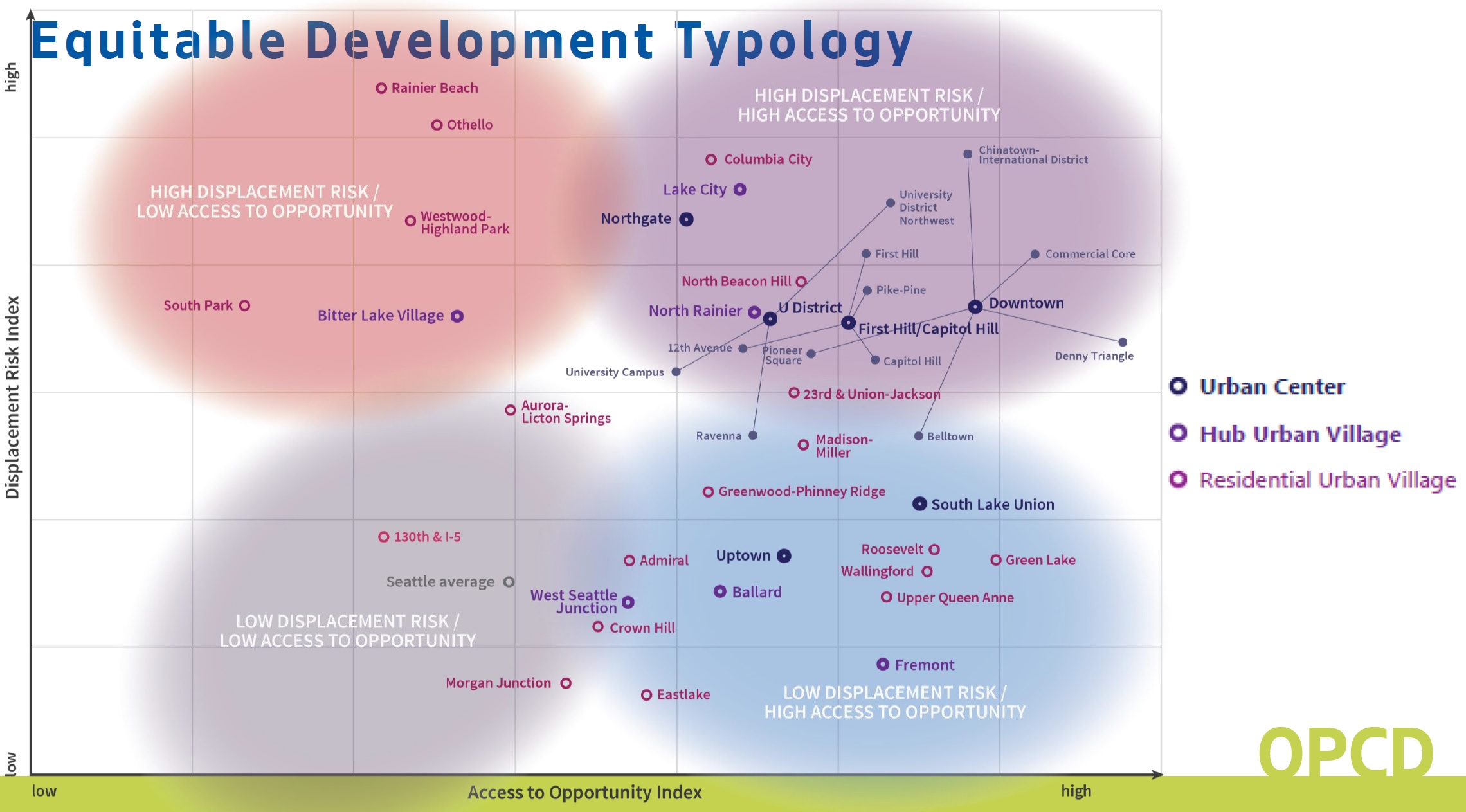 They also mapped out displacement risk and access to opportunity across the city, and the results are not surprising: 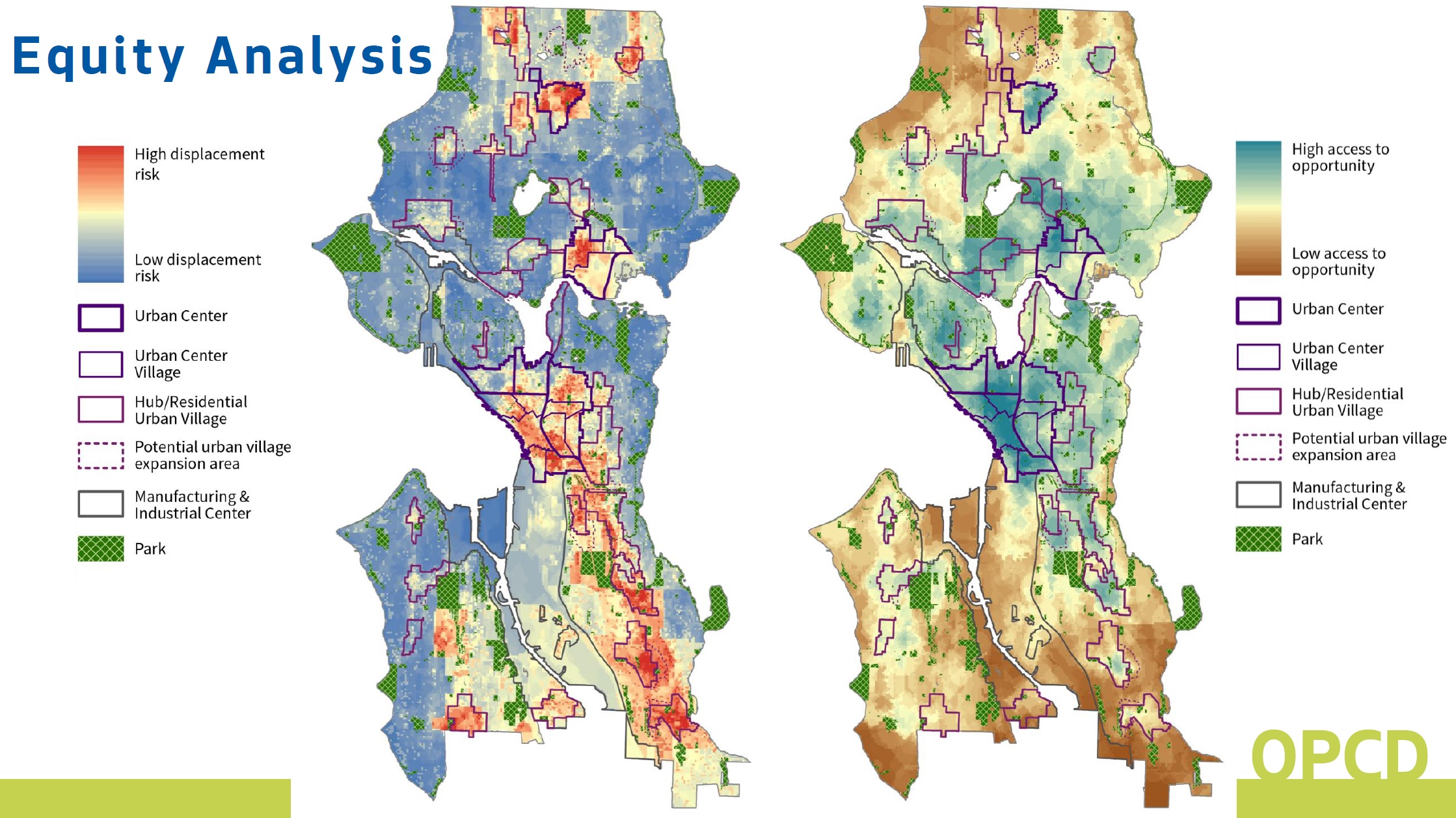 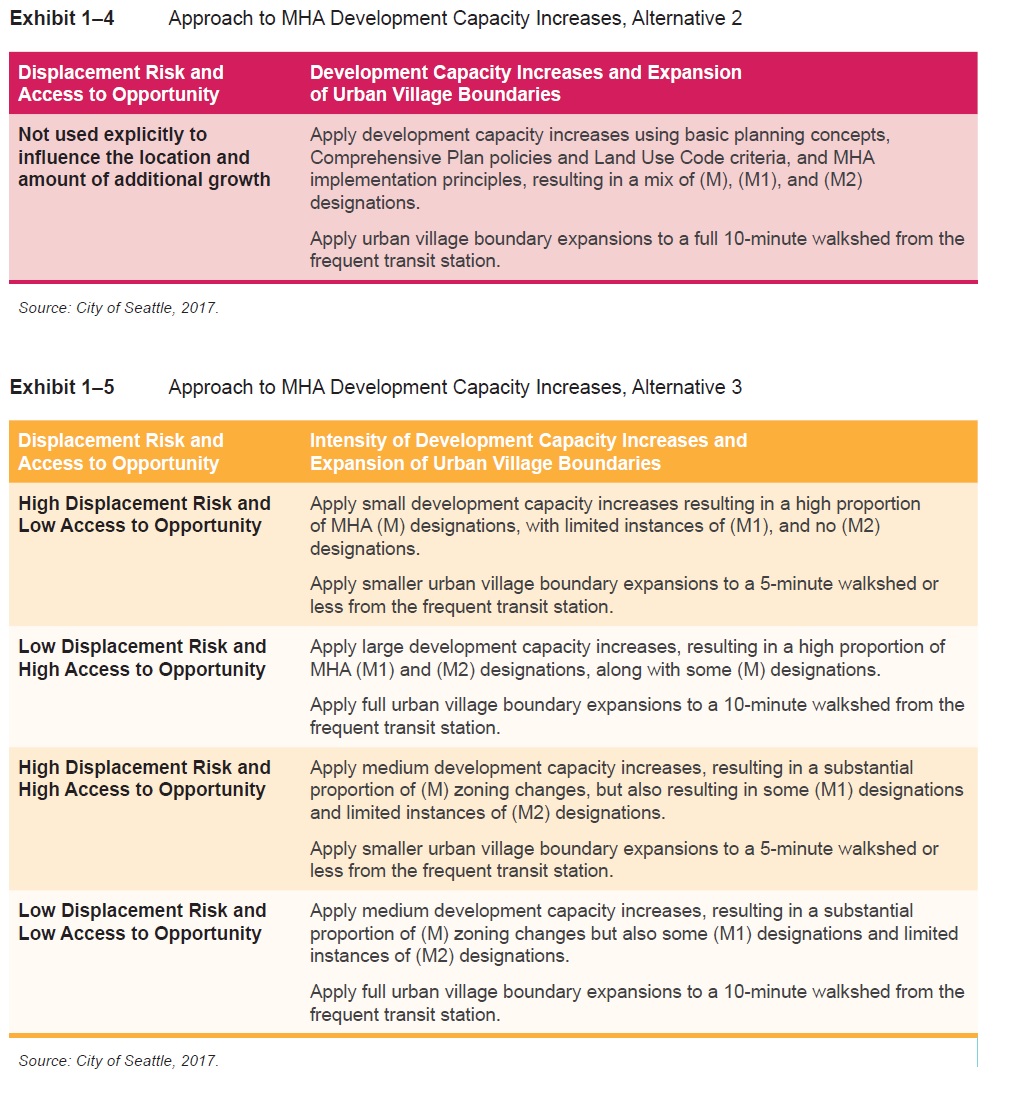 Under the MHA plan everything in an urban village (except historic districts) gets rezoned, because that’s needed to activate MHA requirements. Minimally, the rezone will add some small increment of height or floor area as compensation for MHA affordable housing requirements, but in many places more is added and more is required in return. The aggressiveness of the added development capacity is measured by how far up it pushes a zone in this category list: 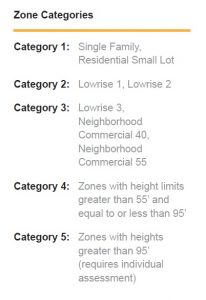 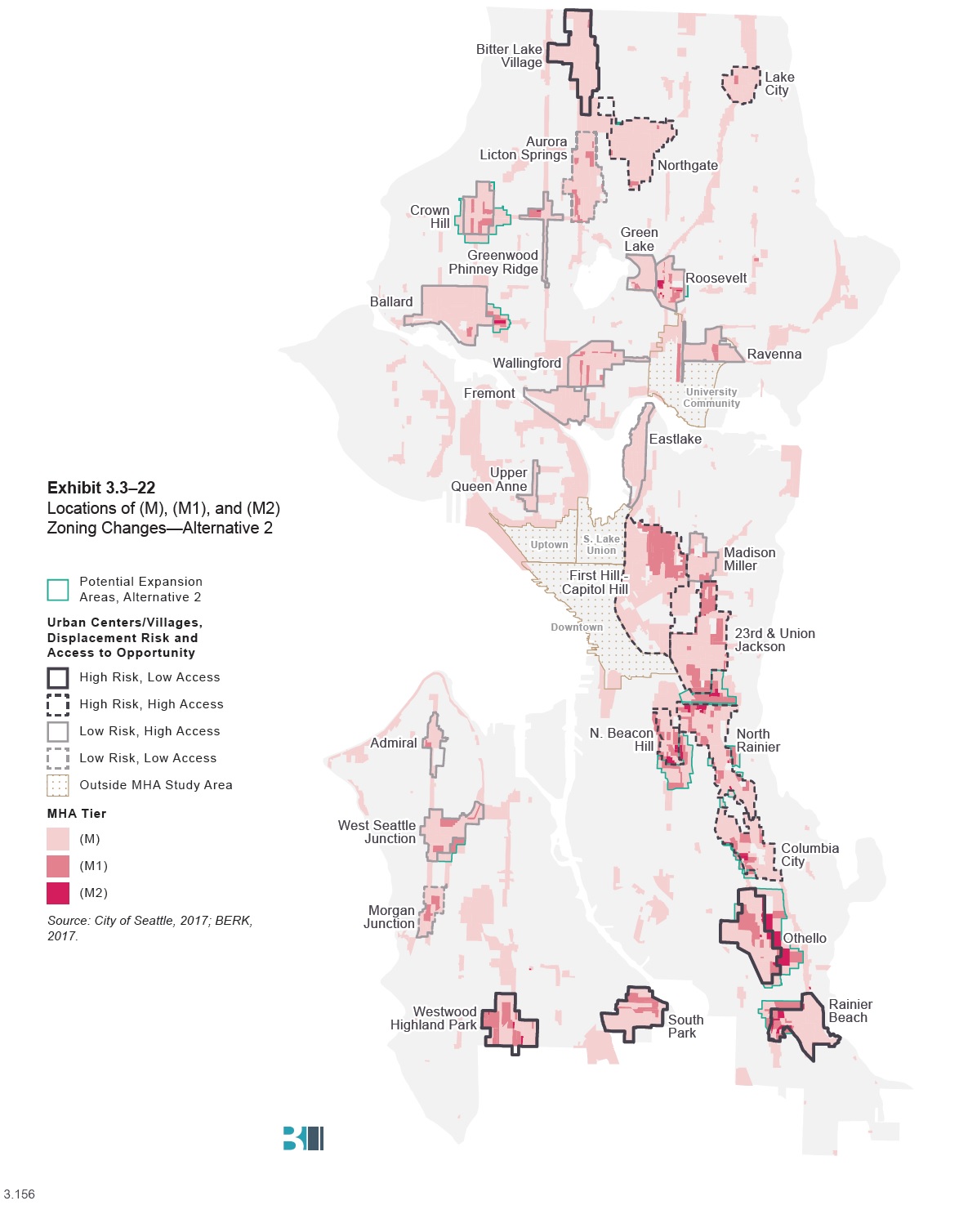 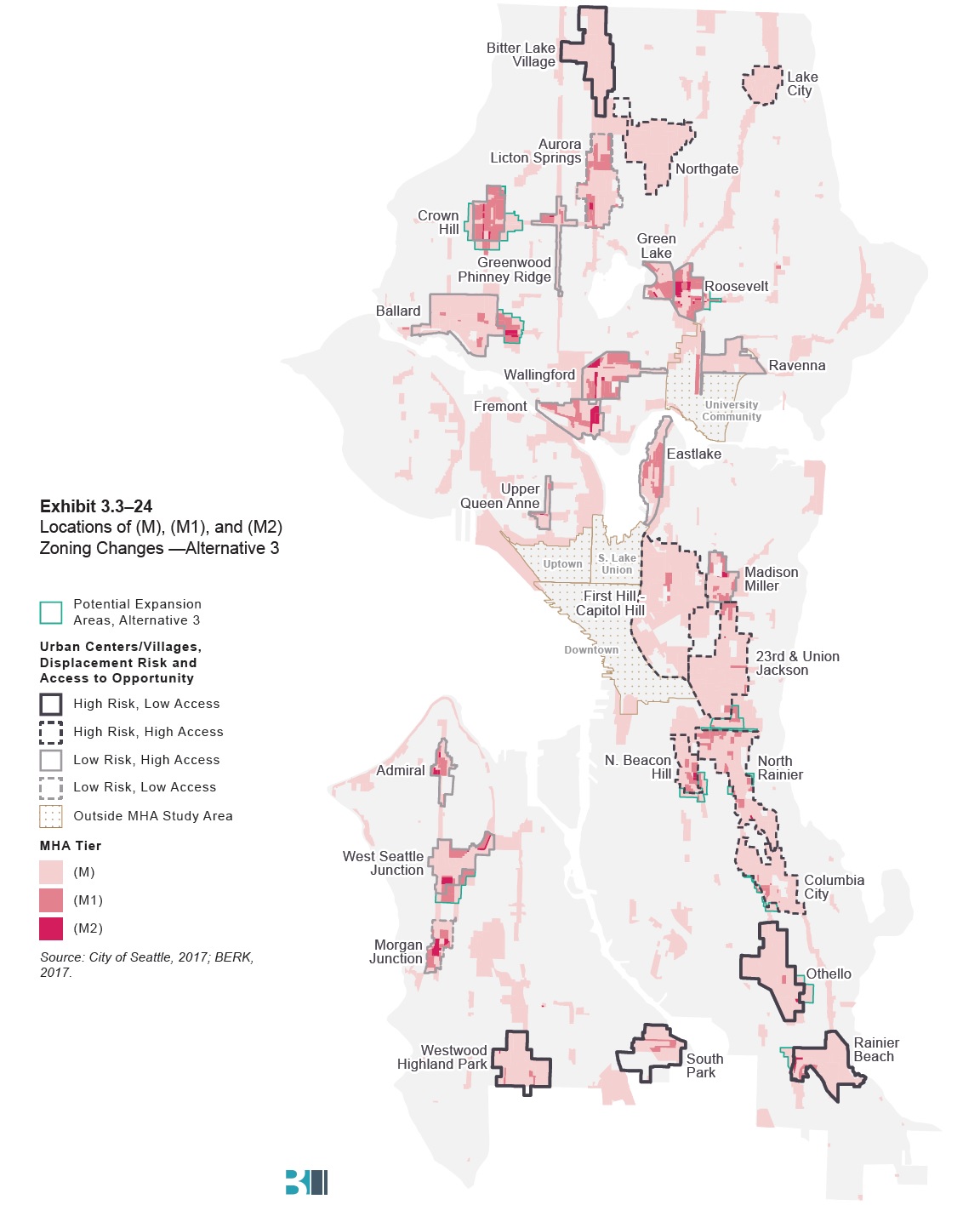 Since the MHA performance and payment requirements are tied to how much additional development capacity is granted, it’s not surprising that building in an “M2” zone requires more than building in an “M” zone. 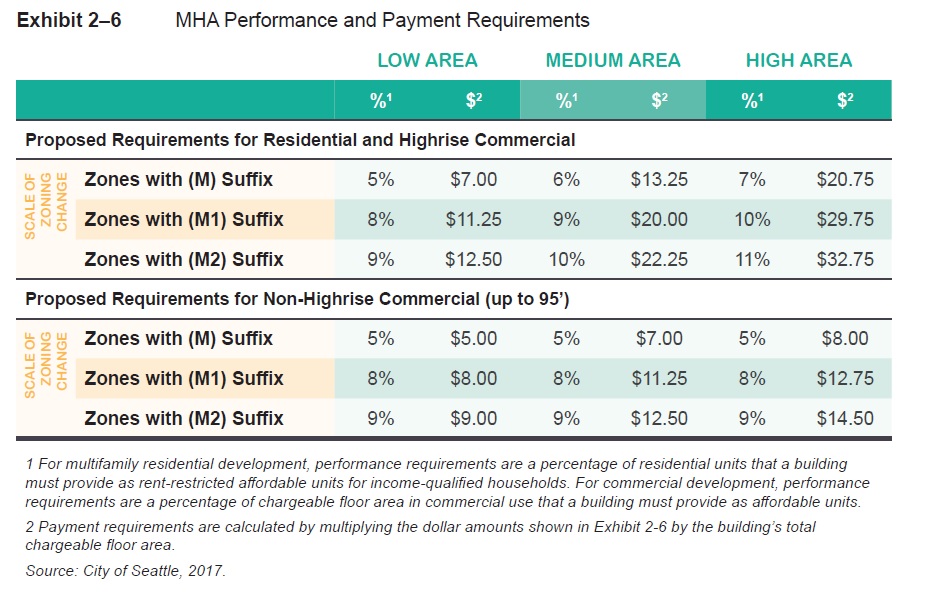 Apart from the aggressiveness of the upzoning, we also need to look at where the land use itself changes — both modifying a zone’s rules, and re-zoning land to a different type. Here’s a summary of how zoning types are changing for the most common “M” rezones, mostly to add density (M1 and M2 are of course more dramatic): 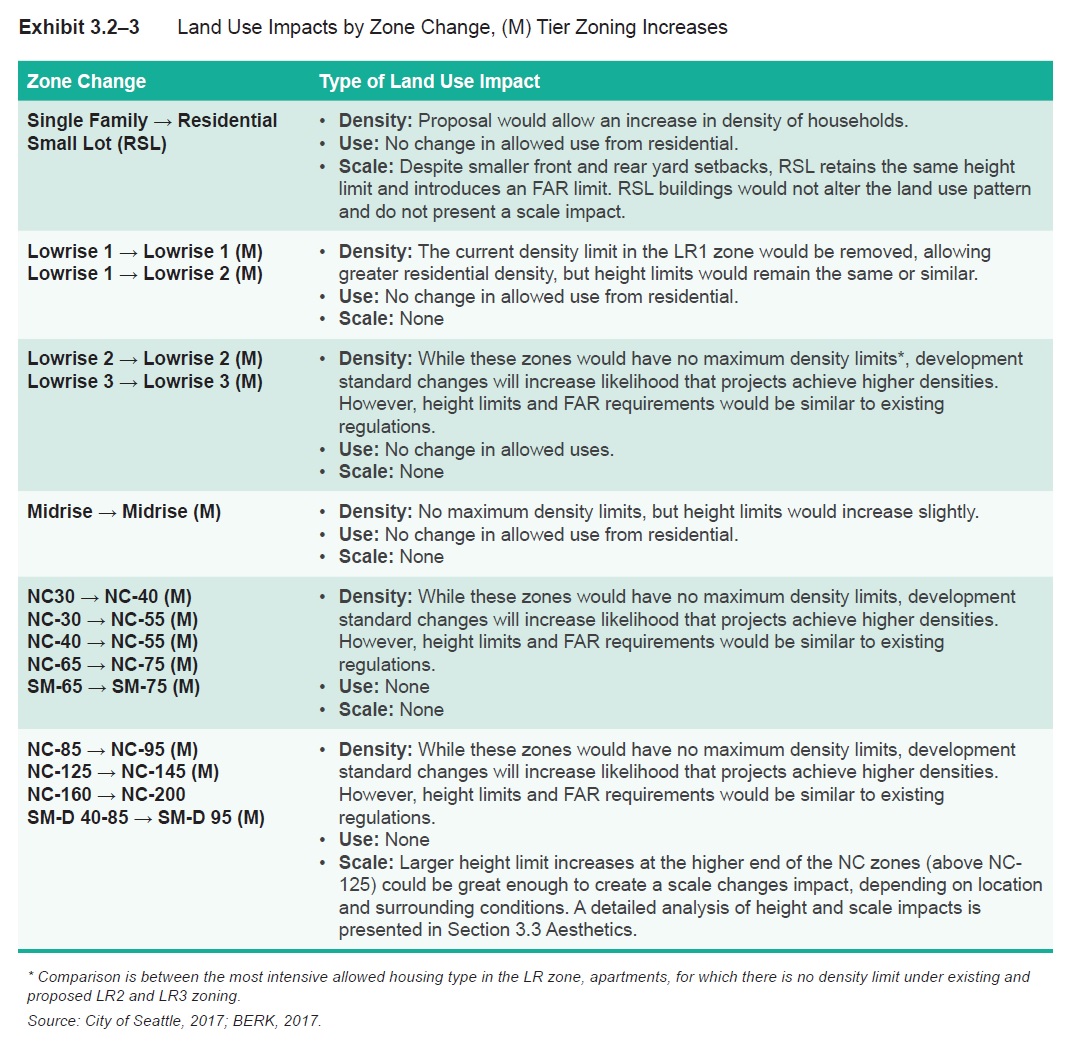 As for changes in how land is zoned, we see some dramatic differences across the three proposals, particularly across the Equitable Development quadrants (for the purposes of this analysis, think of “single family” and “residential small lot” as essentially equivalent, because they mostly are). Alternative 2 moderately reduces single-family zoning across the board, while Alternative 3 protects it in high-displacement areas and rips it out in low-displacement areas. 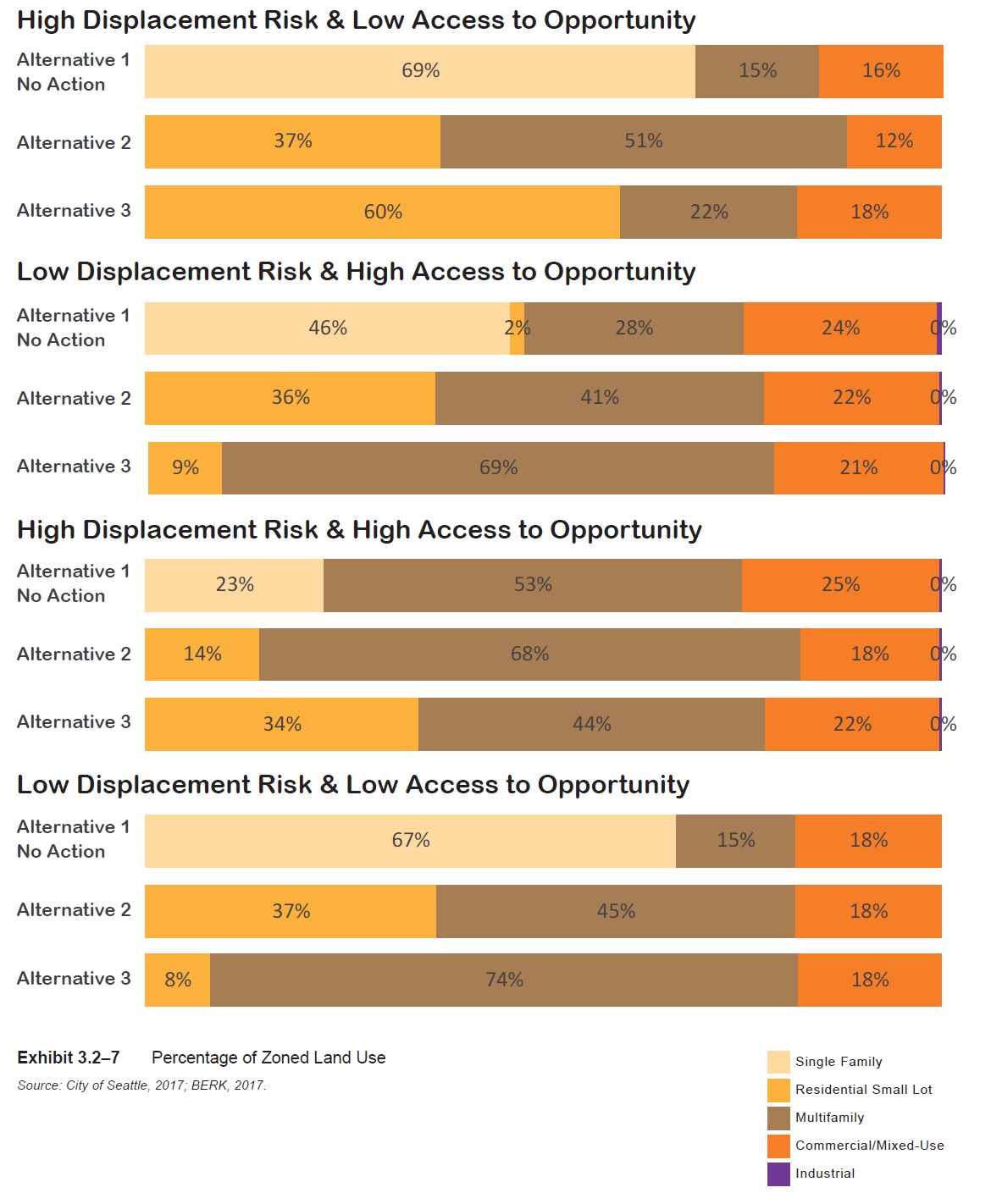 Here’s a map of proposed land use across the city. You’ll notice that by far the largest portion of the land is still single family residential — MHA won’t change that. Single family homes are in no way threatened with extinction under HALA and MHA upzones. 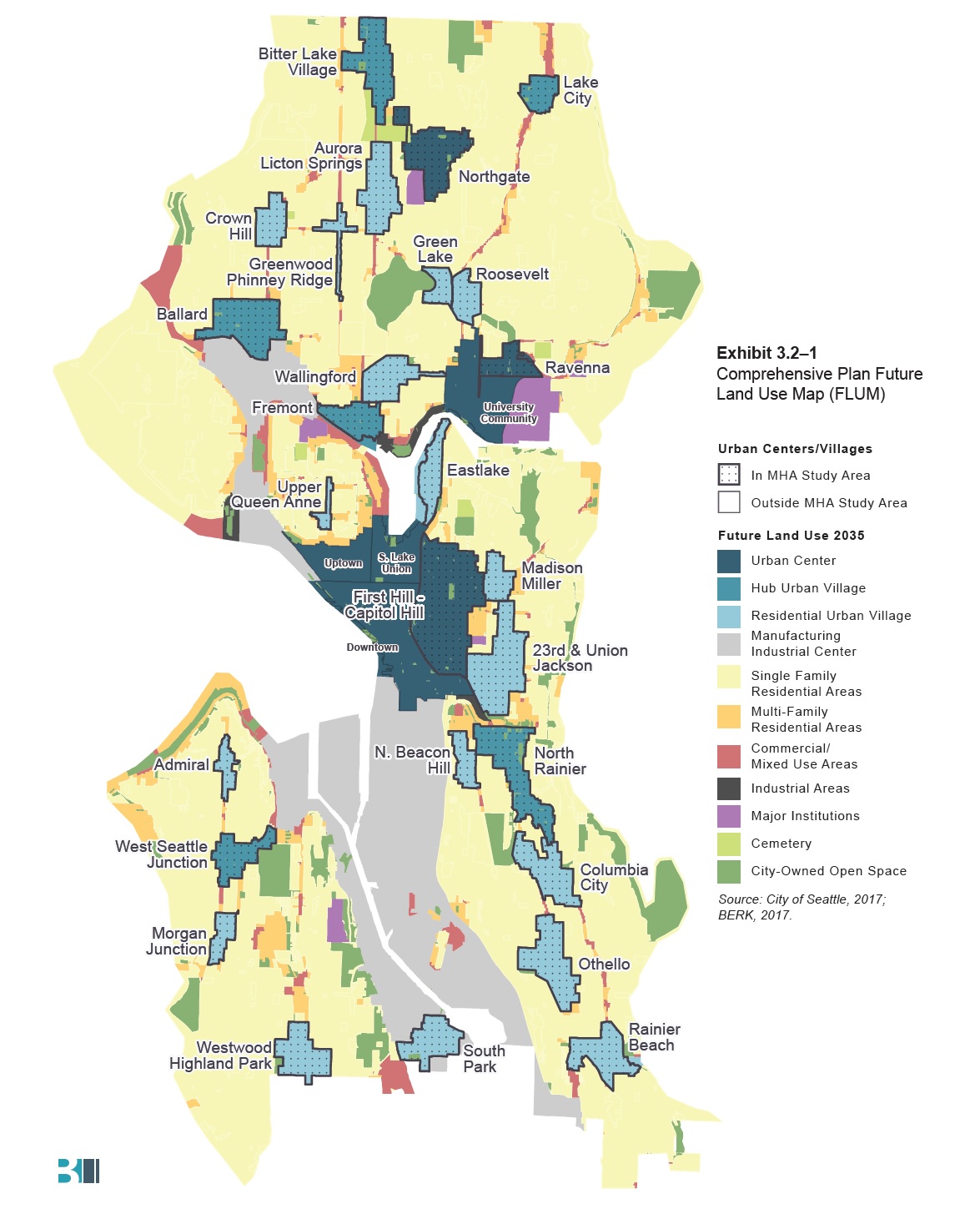 So now that we understand what Alternatives 2 and 3 propose, we can look at what the Draft EIS says the impacts are of each, as compared to the “no action” alternative. Let’s take this category by category, starting with housing. Here’s the baseline of Seattle’s housing today, broken out by type and neighborhood: 338,157 units, heavily skewed to single family homes and larger apartment/condo buildings. 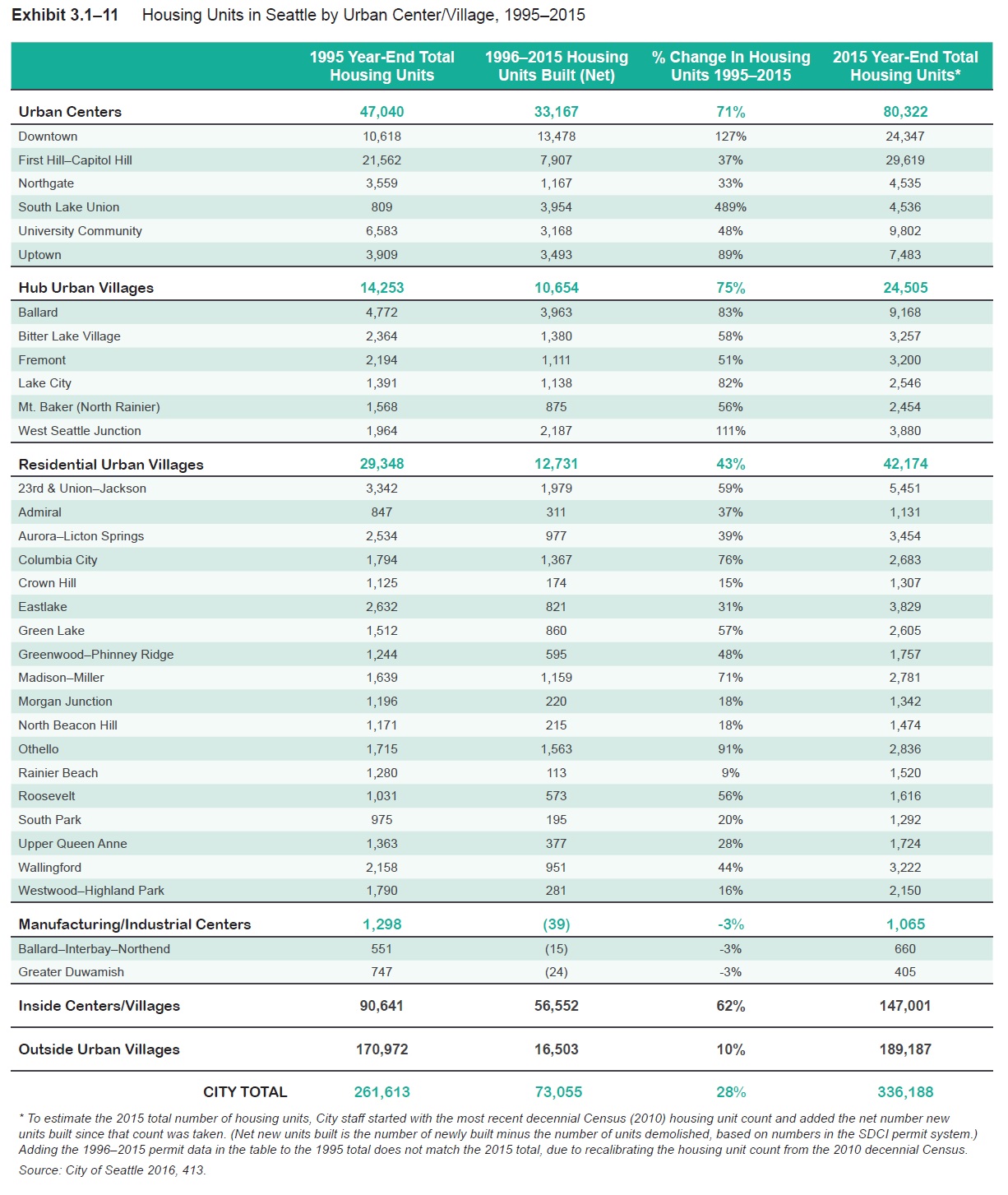 Let’s look at what the MHA program is expected to generate in terms of affordable housing under the three alternatives:

The 205 units in the “no action” alternative is because MHA is already implemented in some neighborhoods and the funds it collects can be used to create affordable housing in other neighborhoods (even though primarily it will create housing in the neighborhoods where the funds were raised).  But you can see that implementing MHA in the rest of the city is expected to generate an additional 5,500 units, about two thirds of the total for the city. You can also see simply in terms of the amount of MHA-generated funding, there isn’t much difference between Alternatives 2 and 3. Here’s how it breaks out by neighborhood: 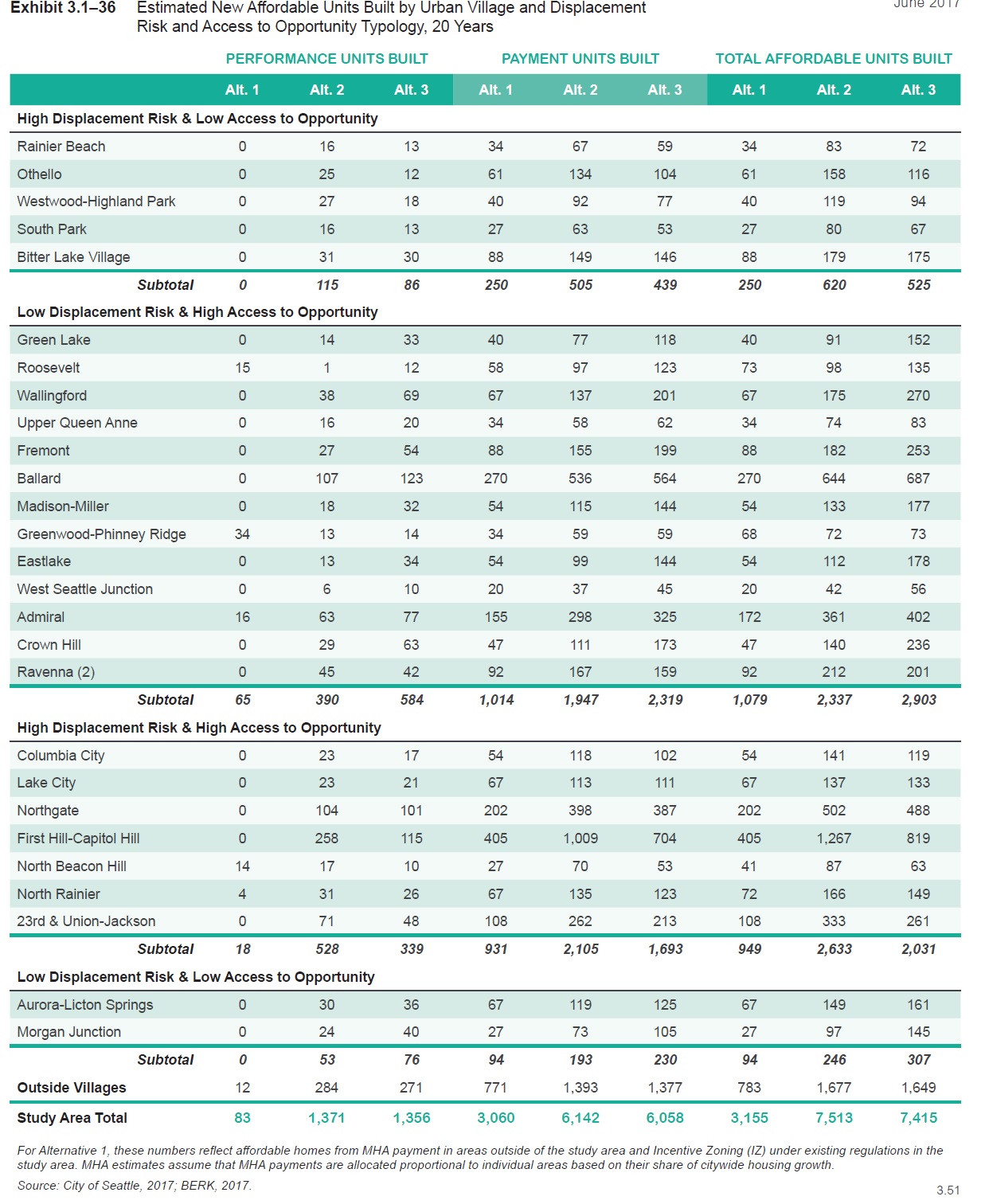 Now let’s add in the rest of the housing growth in the city, based on our understanding of the extra development capacity that MHA will grant. Here’s an estimate of the growth capacity under each of the three alternatives: 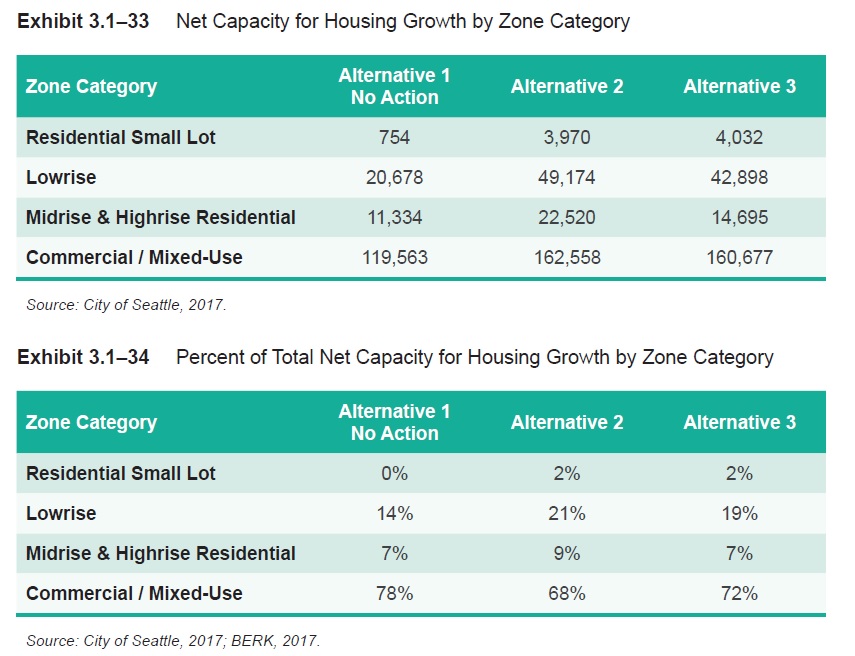 And here’s the predicted growth, factoring in both the additional development and the demolished units caused by that development: 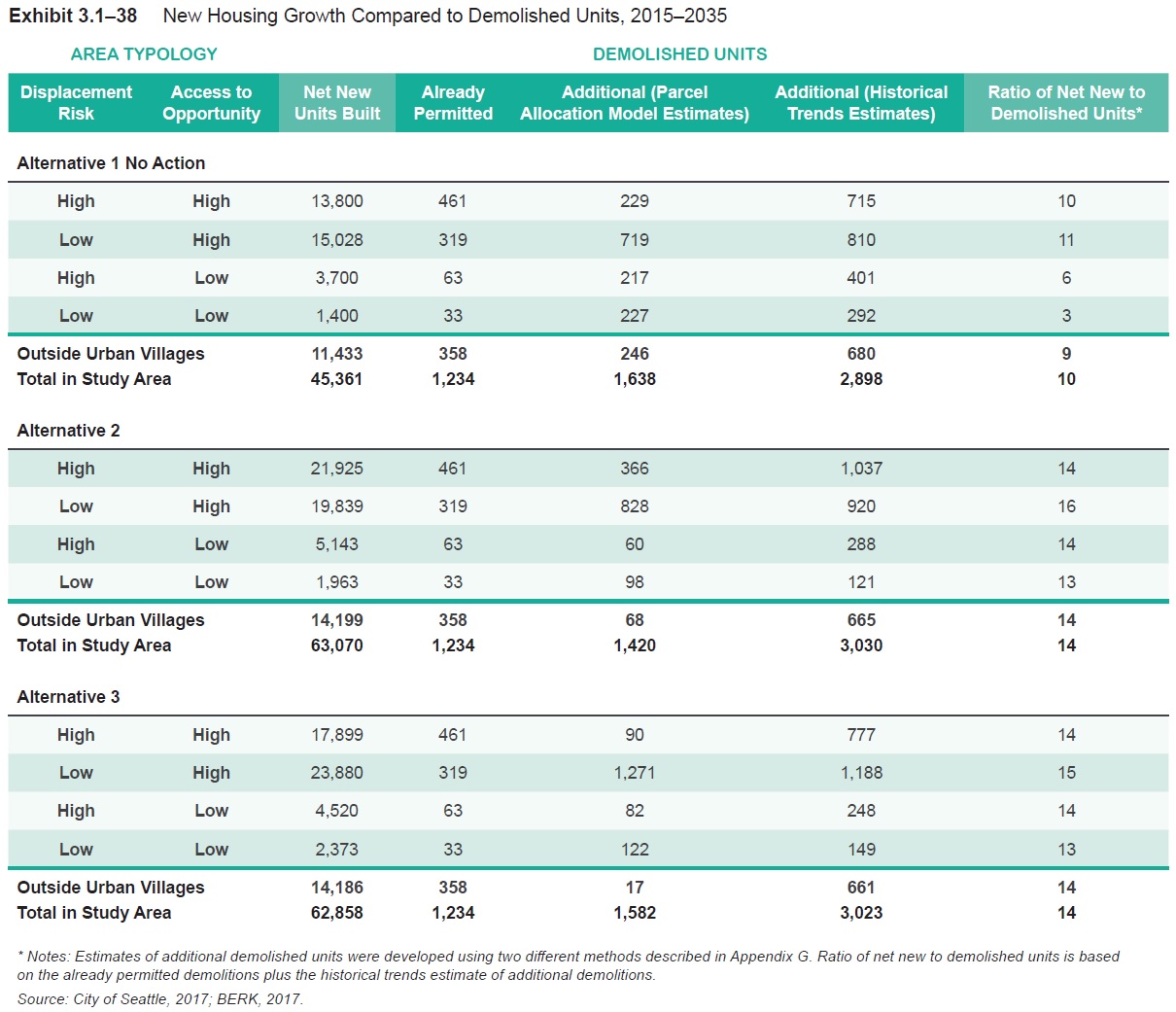 Again, in terms of total housing Alternatives 2 and 3 are not that different; we have to look at individual neighborhoods to see where the impact is. 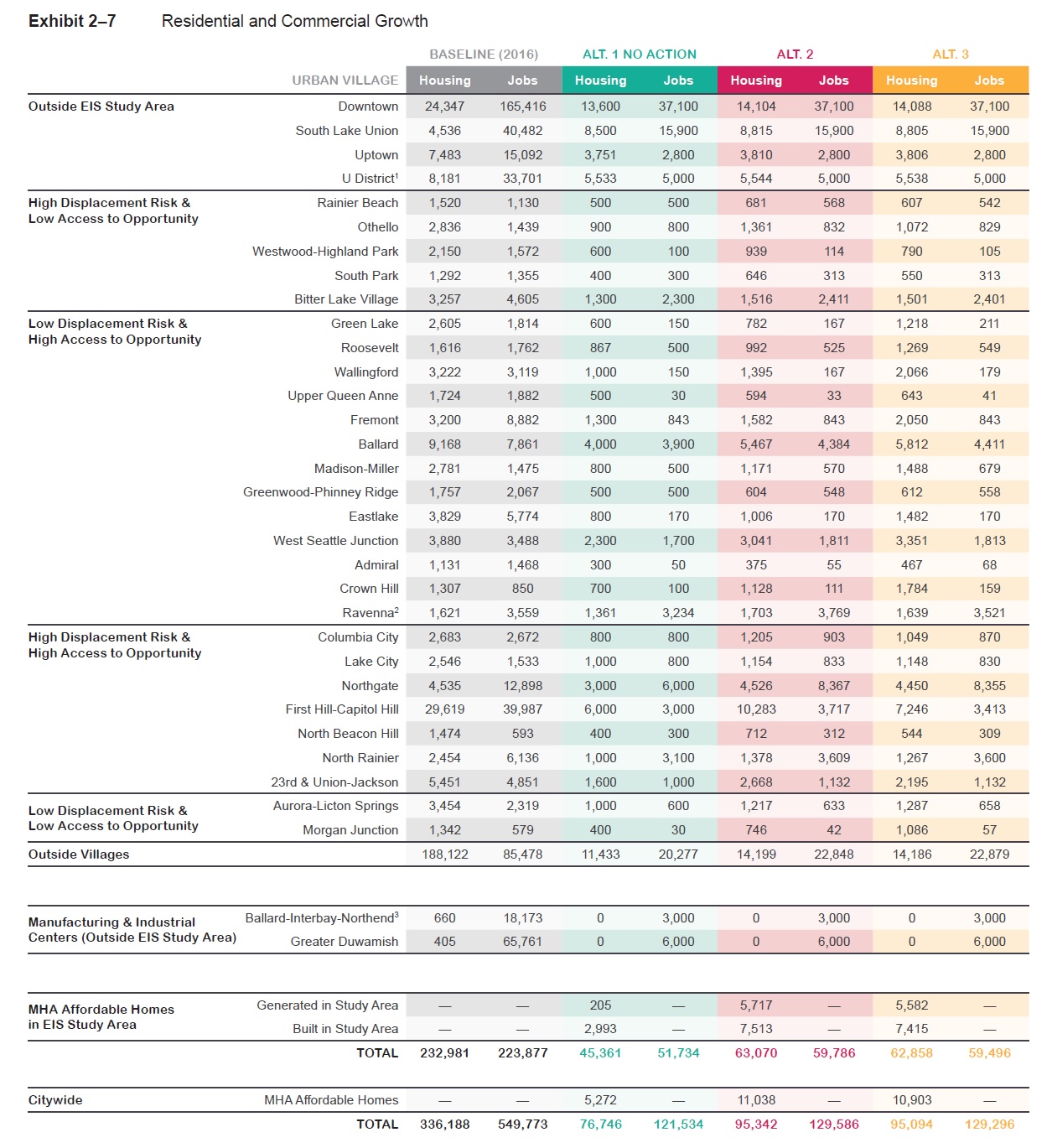 This chart of percentage changes makes it clear which neighborhoods will see the largest, and smallest impact.  Green Lake, Wallingford, Madison-Miller, Eastlake, and Crown Hill will be most impacted. 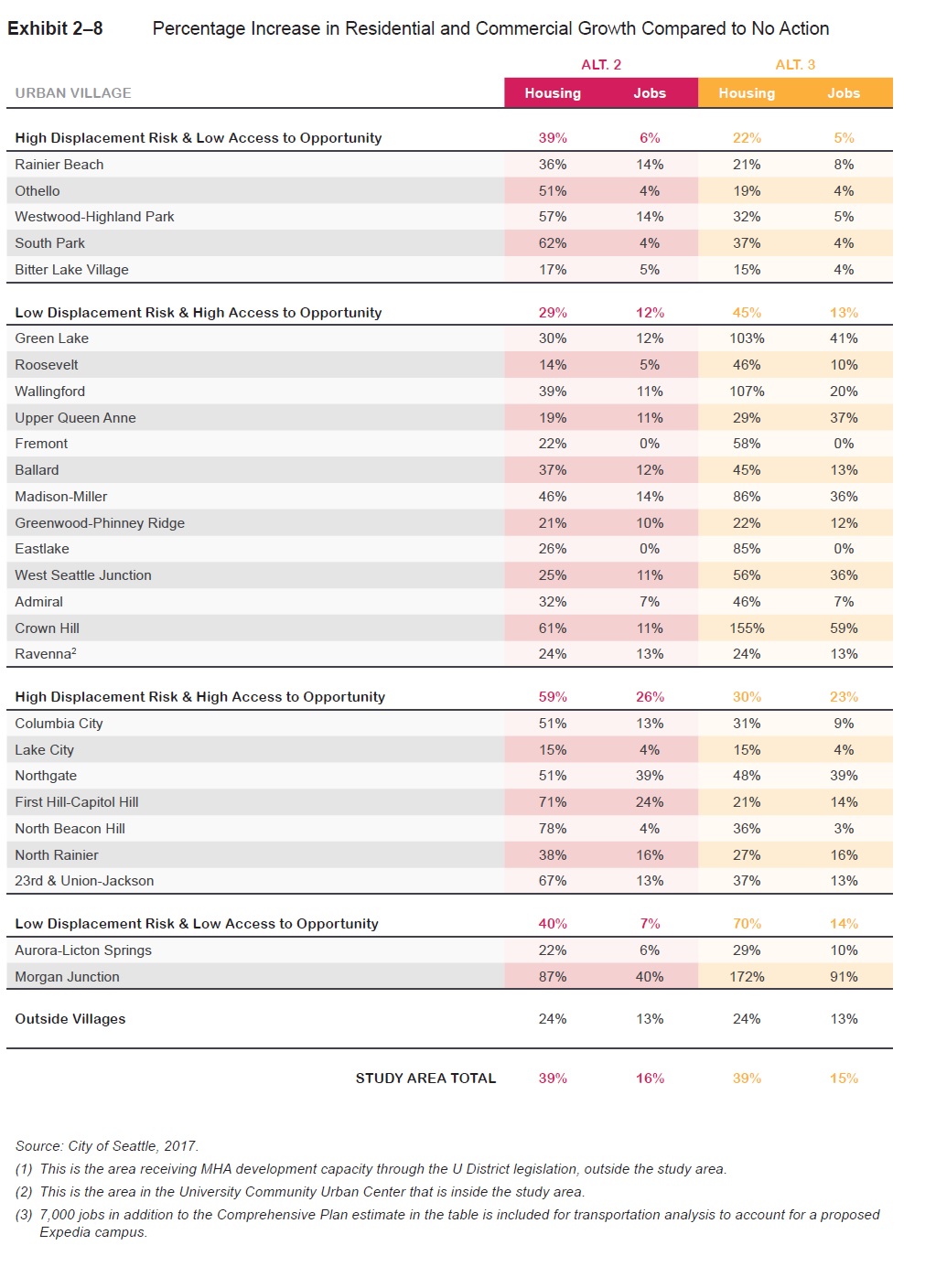 OK, let’s look at another impact area: transportation. The Draft EIS looks at travel time, but also at pedestrian, transit and parking impacts. In a nutshell: transportation sucks today, and it will continue to suck in 2035 under all three alternatives. Pedestrian and transit investments will make incremental improvements, but that’s largely independent of MHA. To the extent that MHA aligns with Transit-oriented Development (which it does) and concentrates growth in the downtown area (which it also does), it won’t be making much worse, but MHA can’t prevent growth from happening everywhere in the city. Here’s the Draft EIS’s assessment of travel times today: 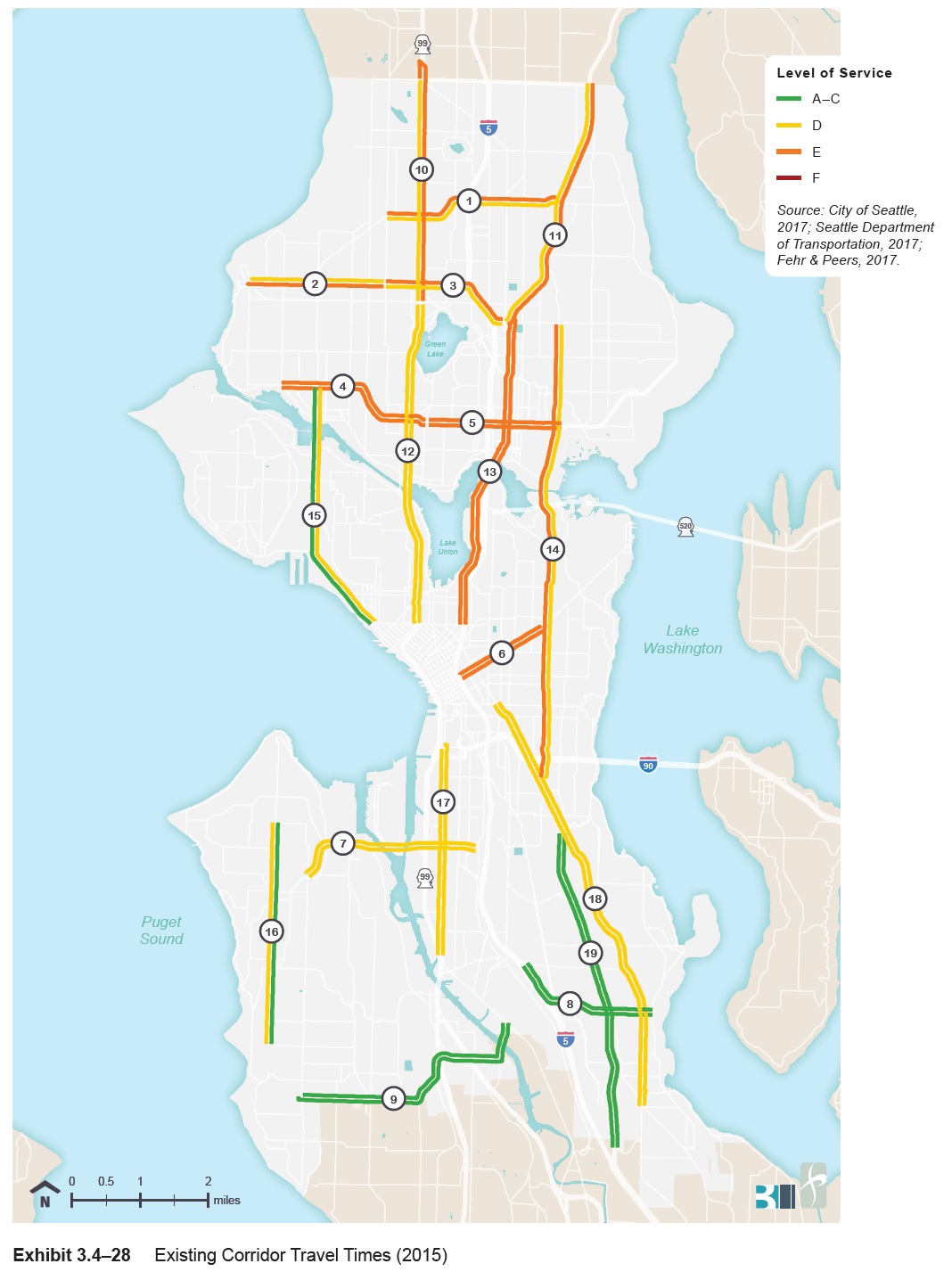 And here’s the prediction for each of the three alternatives: 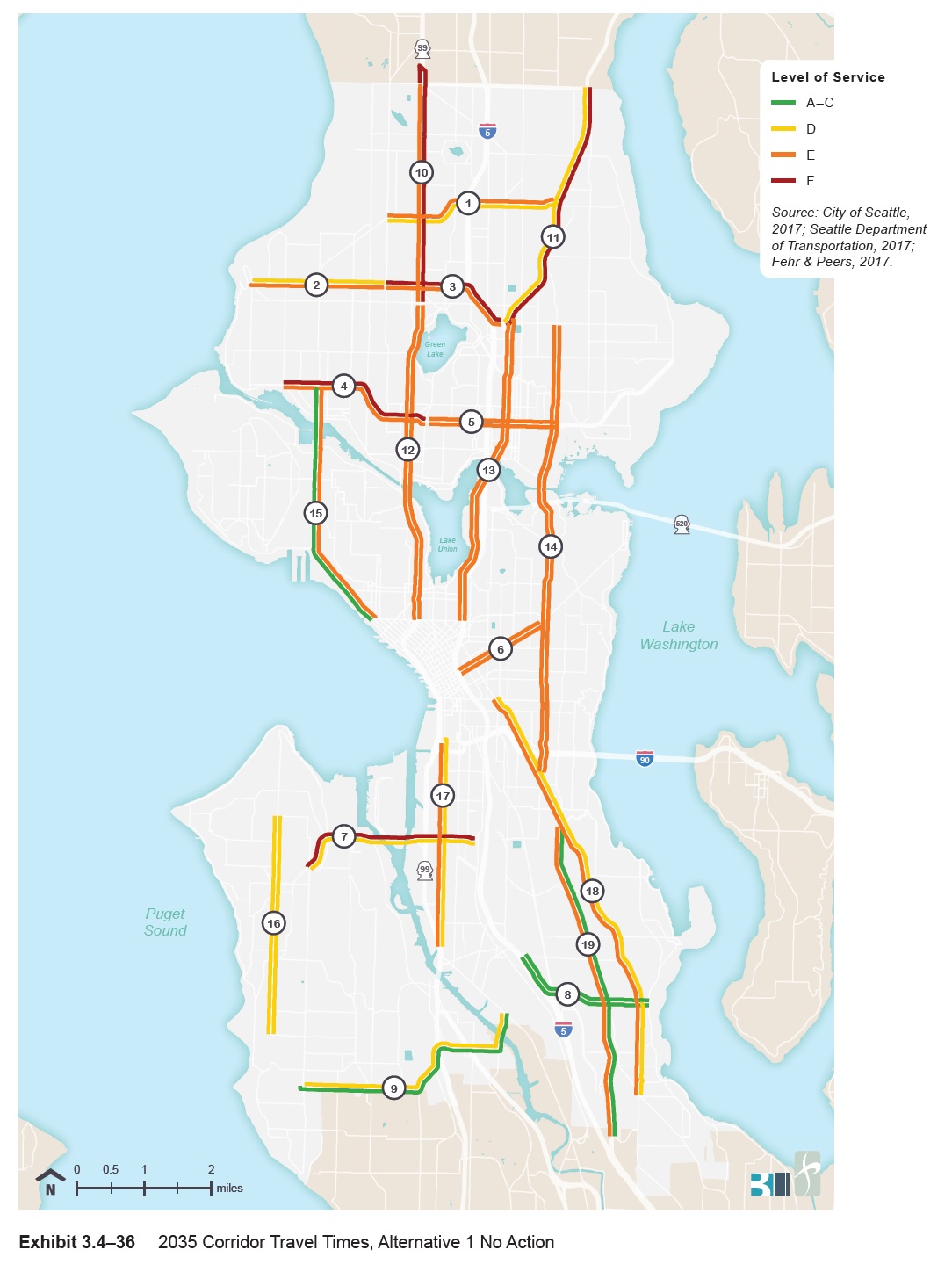 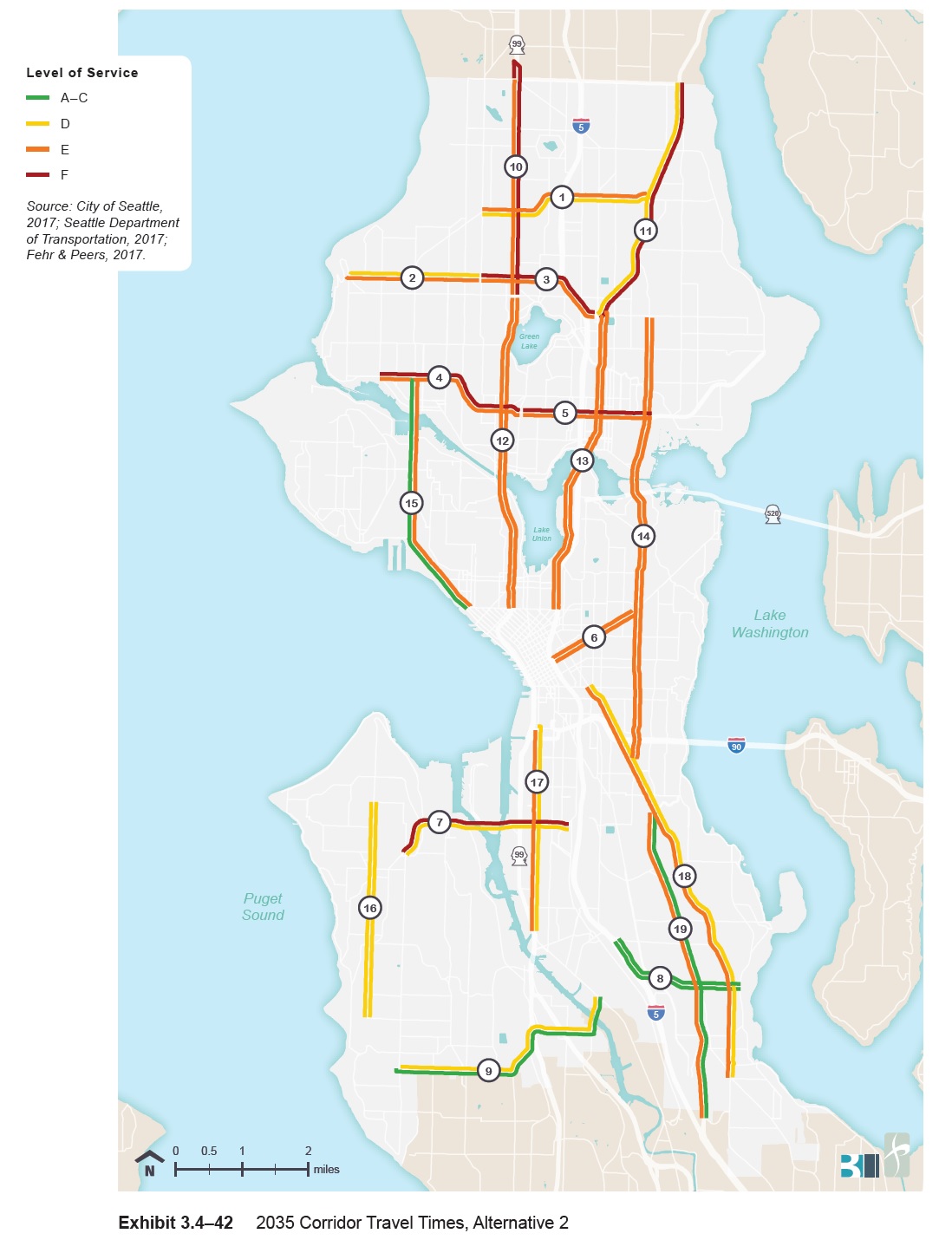 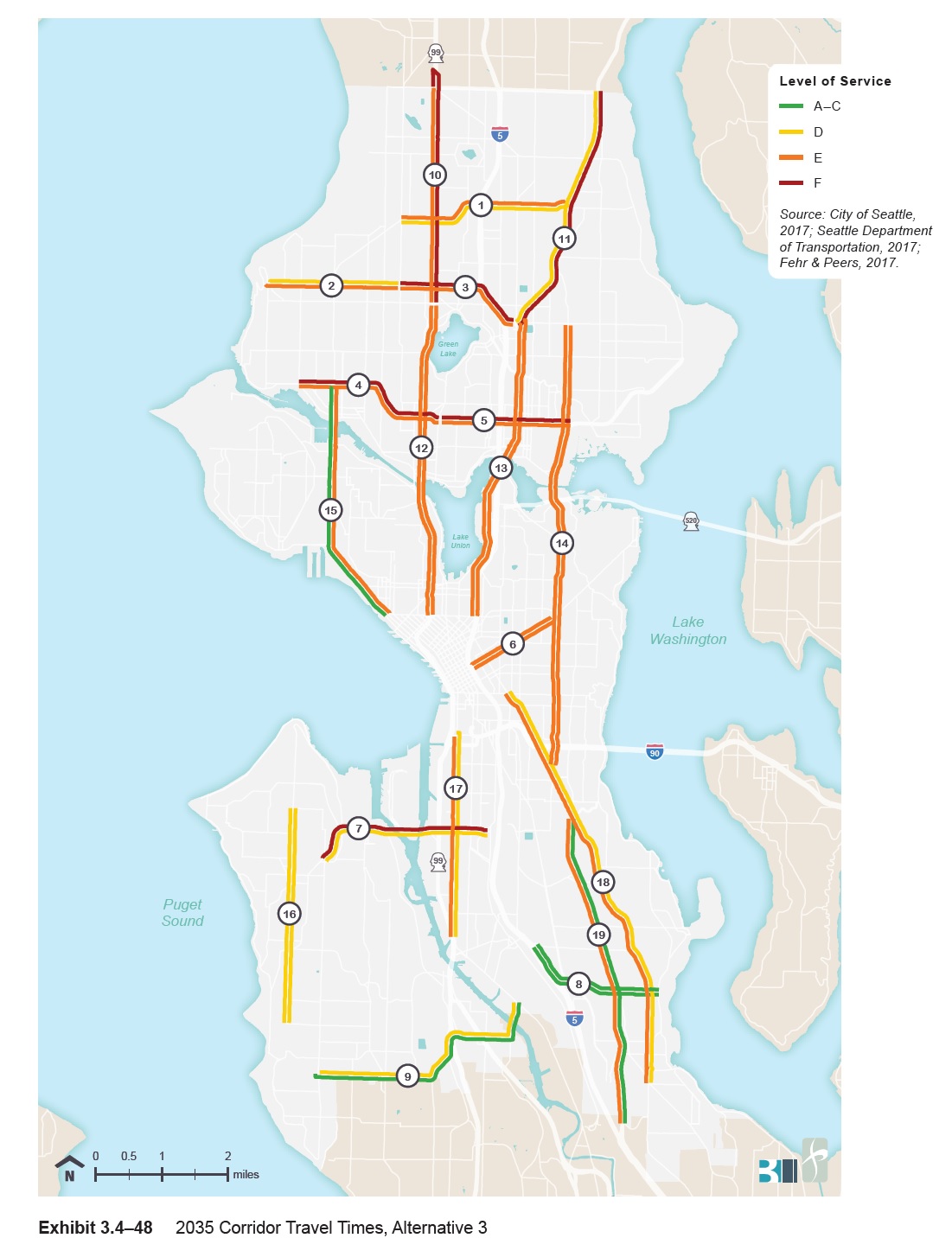 The future looks bleak for car travel in Seattle. And the only salient difference between the three alternatives is that Section 5 (the University District, Wallingford, Green Lake) gets worse in Alternatives 2 and 3.

In summary: traffic is going to get worse, but that’s mostly independent of MHA. Street parking will be impacted by MHA, since density will be increasing. Everything else won’t be affected by MHA.

Now for some good news: air quality. The air quality in Seattle is very good today. 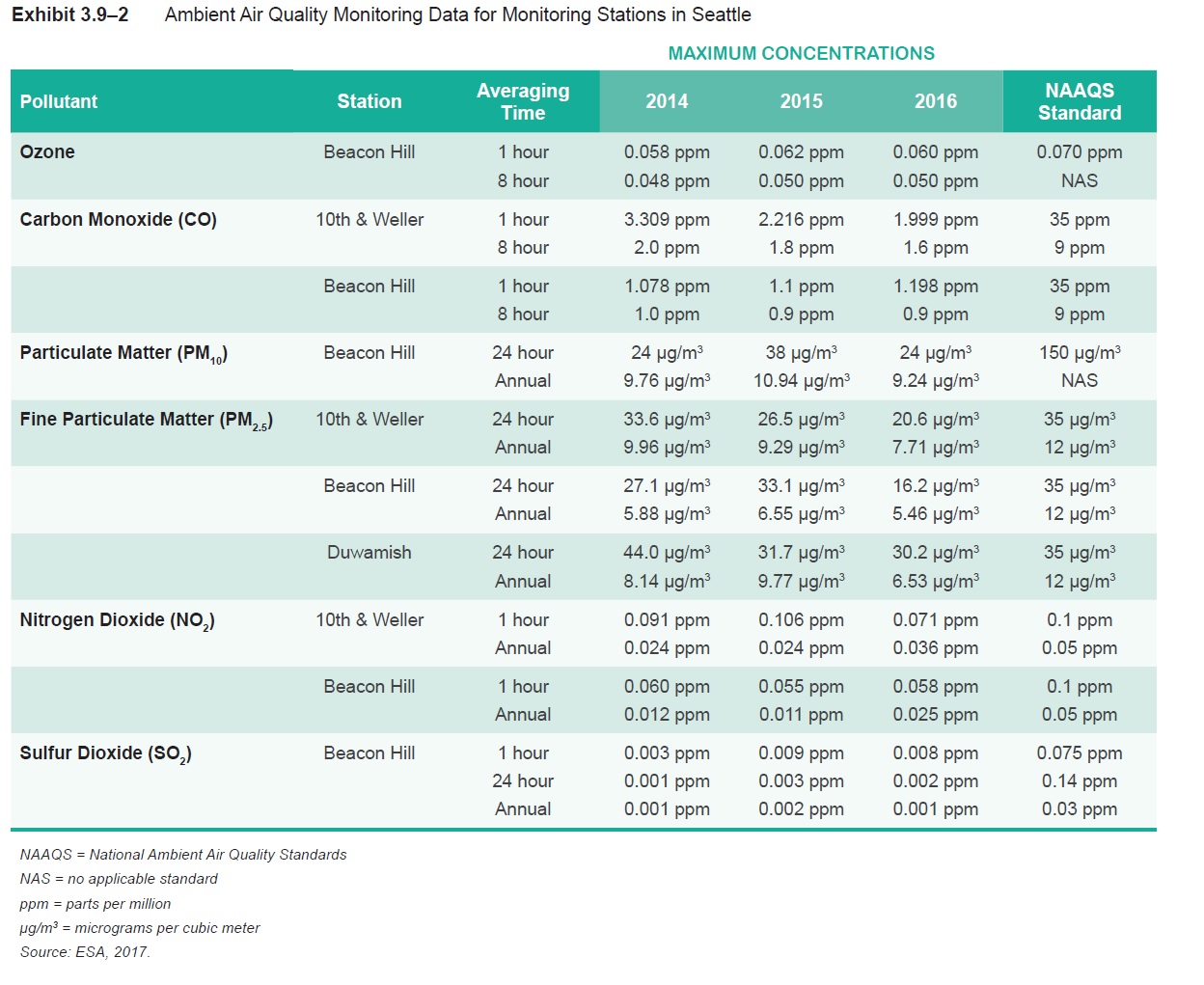 In 20 years, it will be even better. MHA might make it not-quite-as-much-better, though, mostly due to transportation. It’s a fairly negligible change from the “no action” alternative, though.

As for parks and open spaces: the city has specific goals for total amount per user, and for proximity to where people live.

On total acreage: the city meets it goal today, and can meet this goal in 20 years with a relatively modest increase (about 400 acres). Where it really falls down is in proximity to housing: a large fraction of the parks and open space are in large tracts, some fairly remote (like Discovery Park). This is particularly true for urban villages. 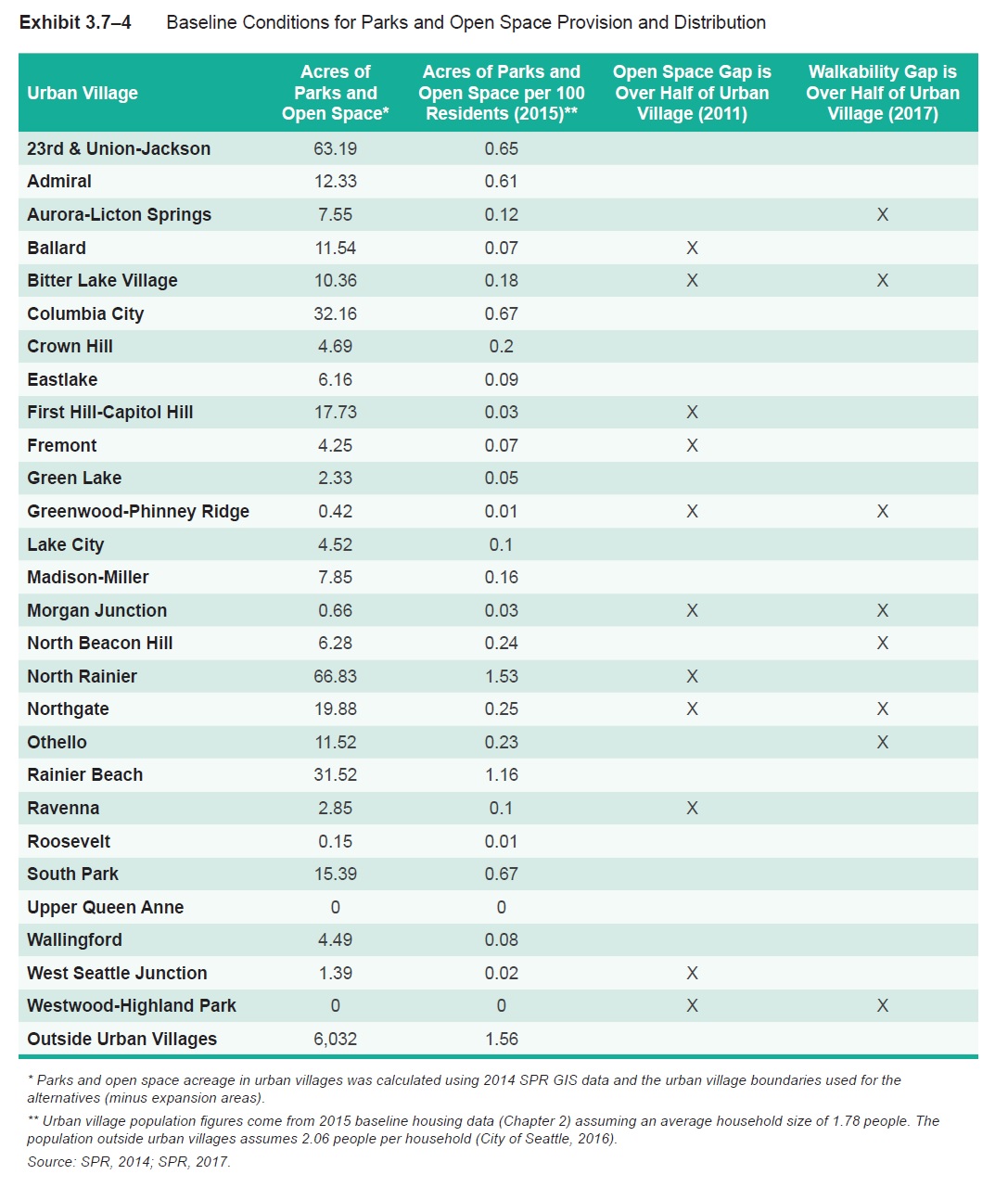 MHA won’t fix this; in fact, it is likely to make it worse in several places. Partly this is because new development will be competing for land with potential parks acquisitions. Now, the Incentive Zoning program that is paired with MHA and required for larger projects does require contributions to open spaces, but there aren’t enough of those in urban villages to move the numbers. 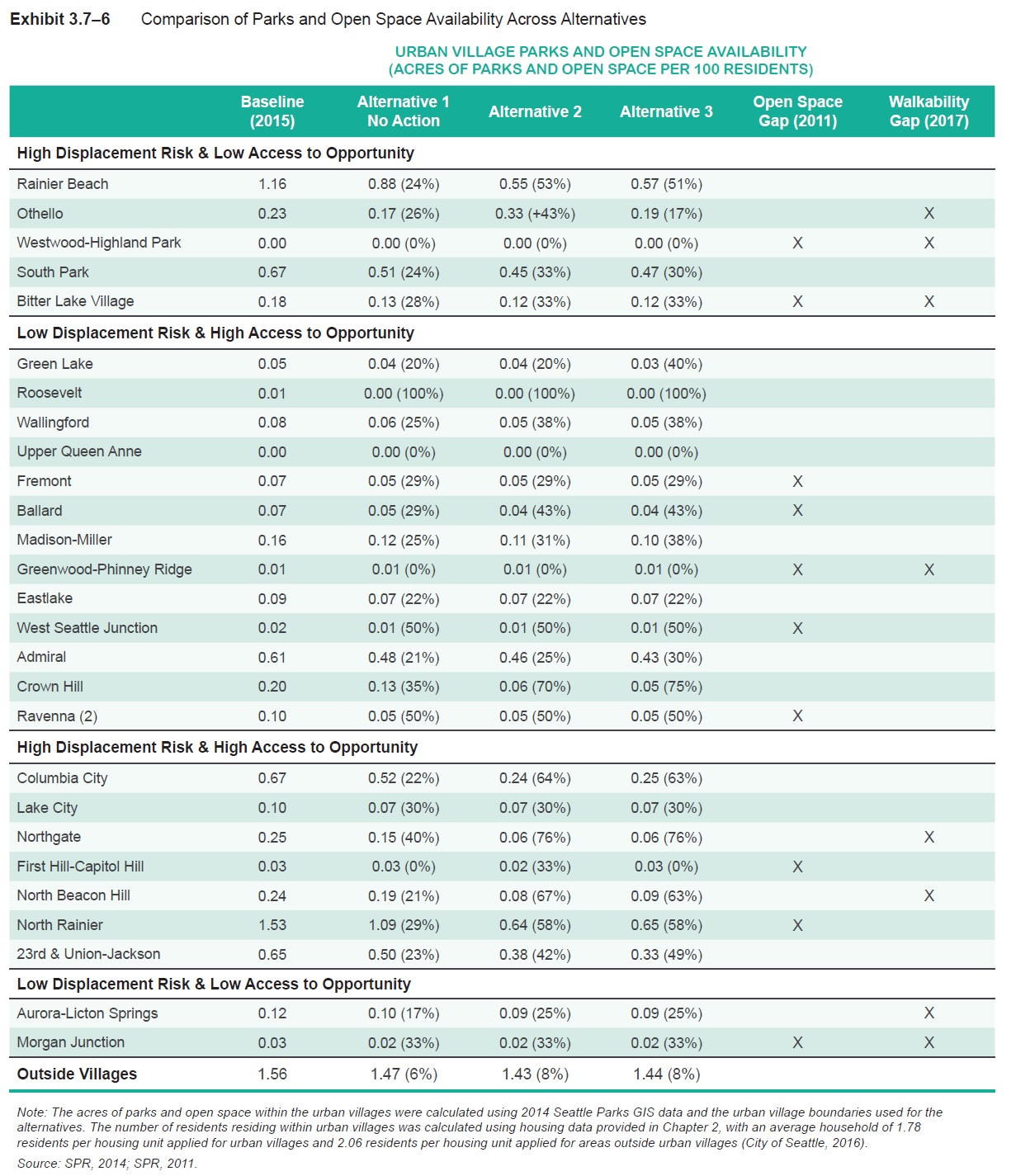 The city will need a very different plan (and a lot of money) to reach its parks and open space goals.

Tree cover is slightly better news: MHA is not expected to change the size of the city’s tree canopy, regardless of which alternative is chosen. 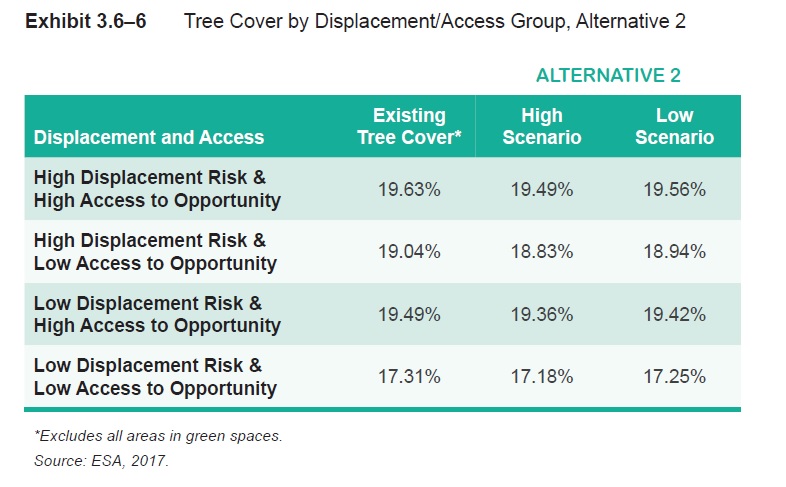 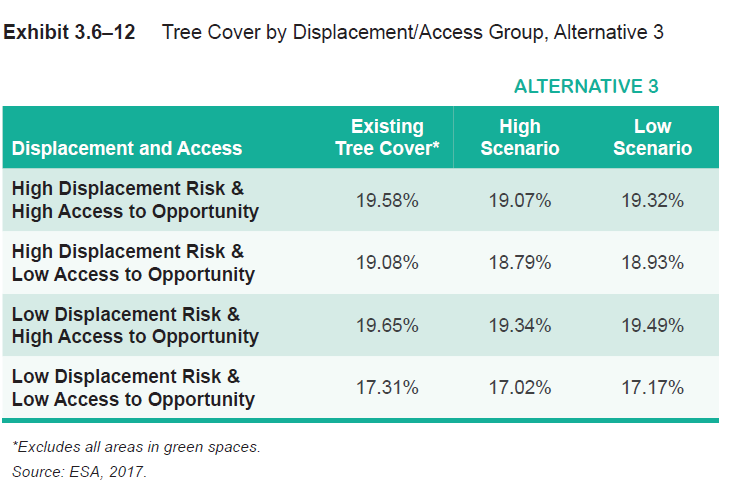 There are other impacts discussed in the report: aesthetics (including building heights and design codes), utilities, historic resources, etc. None of them see significant impacts that can’t be mitigated. Also, the discussion of housing also dives into the socioeconomic impacts: by race, income level, and other factors. Both Alternatives 2 and 3 are expected to benefit underserved communities over the “no action” alternative, and Alternative 3 benefitting those communities slightly more by more aggressively combatting displacement.

The Draft EIS doesn’t claim there are no impacts; on the contrary, there are significant ones. Many are good; some are bad. As the discussion of the city-side (or “everywhere else”) MHA legislation moves forward, expect the conversation to shift to policy trade-offs: Wallingford, for example, will get significantly more housing, which may ease price inflation, but at the cost of worse traffic and no additional open space — especially if Alternative 3 is selected. On the other hand, Othello will get more protection from displacement if Alternative 3 is selected — but at the risk of losing urban renewal opportunities and having less housing to accommodate a growing population. There are no perfect answers here. And it’s important for us to be clear about which changes predicted for the next 20 years will happen independent of whether MHA is rolled out across all of the city’s urban villages; to reiterate an earlier point, the pertinent comparison isn’t between the Seattle of today and a Seattle of 2035 that has implemented MHA; instead, it’s between 2035 Seattle without MHA, and 2035 Seattle with it. Whether or not MHA upzones happen, there will be a ton of growth here. The question is whether MHA will make that growth easier to absorb.  There will certainly be debate about Alternative 2 or 3 is preferable; city staff chose not to identify a “preferred alternative,” which means it will be up to the City Council to argue that out. And that will be an interesting test of the district-based election system for Council seats, as we see which Council members go to bat for their constituents.

This process is just getting started, and it will be a marathon, not a sprint. Generating the final EIS will extend at least through the fall, depending on the volume of comments received. For its part, the Council expects its work on the city-wide MHA implementation to take several months next year.