For the first time in ten years, the City of Seattle is bidding out $30 million of homelessness funding through an open RFP process.  It’s using the RFP as a chance to rewrite the rules for service providers — and more importantly to ratchet up the requirements placed upon them.

The Human Services Department has an annual operating budget of $150 million, of which $50 million is dedicated to the homeless response. About $20 million has recently been bid out through other programs, such as for the Navigation Center. The remaining $30 million will go to new contracts for services beginning in January 2018.

The city has defined eight categories of funding that they are looking  to fund through the RFP:

You’ll notice that the total dollars add up to considerably more than $30 million. That’s because the city is trying to be flexible with its funding, so it can respond to the best proposals and also express a preference for providers that are partnering or collaborating rather than just working in a silo.

Much of the city’s homeless response funding has previously been dedicated to repeated renewal of contracts with providers that the city has worked with for years — usually without any performance metrics attached to them and little or no effort to evaluate whether the providers are actually delivering decent return on the investment the city is making with them. All that is changing. In theory, at least, there are no favored providers any more: all of them need to go apply through the RFP in order to gain funding starting in January 2018.

Further, the city changed its contracts starting six months ago to require all of its providers to collect and report performance metrics. With this new RFP, HSD will now be using those performance reports to prioritize funding for the highest-performing providers.

Moving forward, the new contracts will use a “pay for performance” approach in its funding. HSD has reached consensus with its key partner organizations (King County Public Health, All Home, and United Way) on five key metrics that they will all be using to evaluate the effectiveness of the homelessness response:

12% of the funds committed to in a funding contract will be tied to meeting targets for each of these metrics. Providers will be evaluated quarterly, and if they don’t meet the targets 3% of the annual funding will be withheld. In a Council review of the RFP program this afternoon, Council member Burgess noted that the Families and Education Levy and the Seattle Preschool Program both use the “pay for performance” program and have found it to be very effective. It will certainly be a dramatic culture change for providers who have not been held accountable for their results for many years.

But that’s just the beginning of the new requirements for providers in the new RFP program. In addition:

Racial equity is a big factor. In particular, HSD is focused on addressing two glaring disparities in the current homeless system: 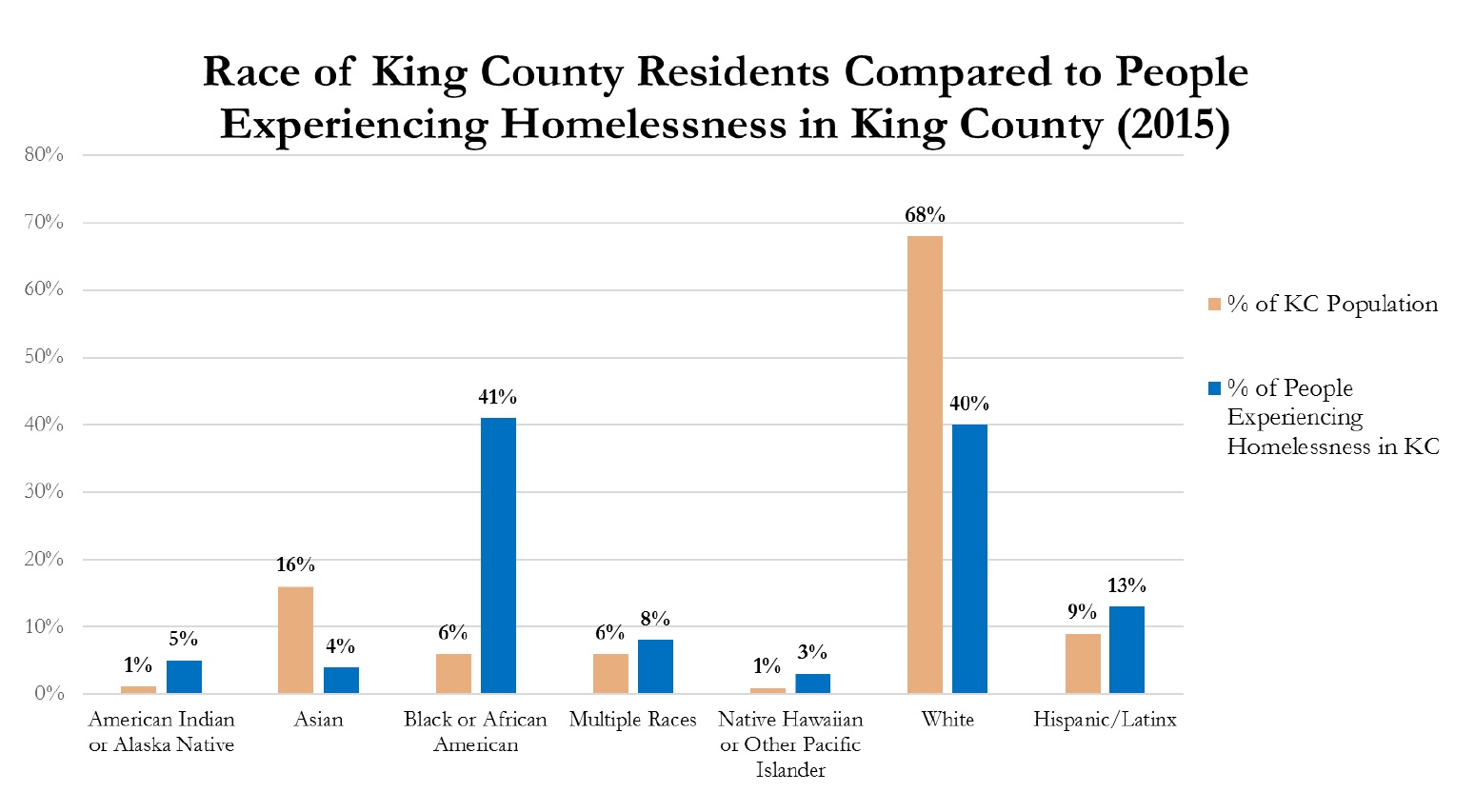 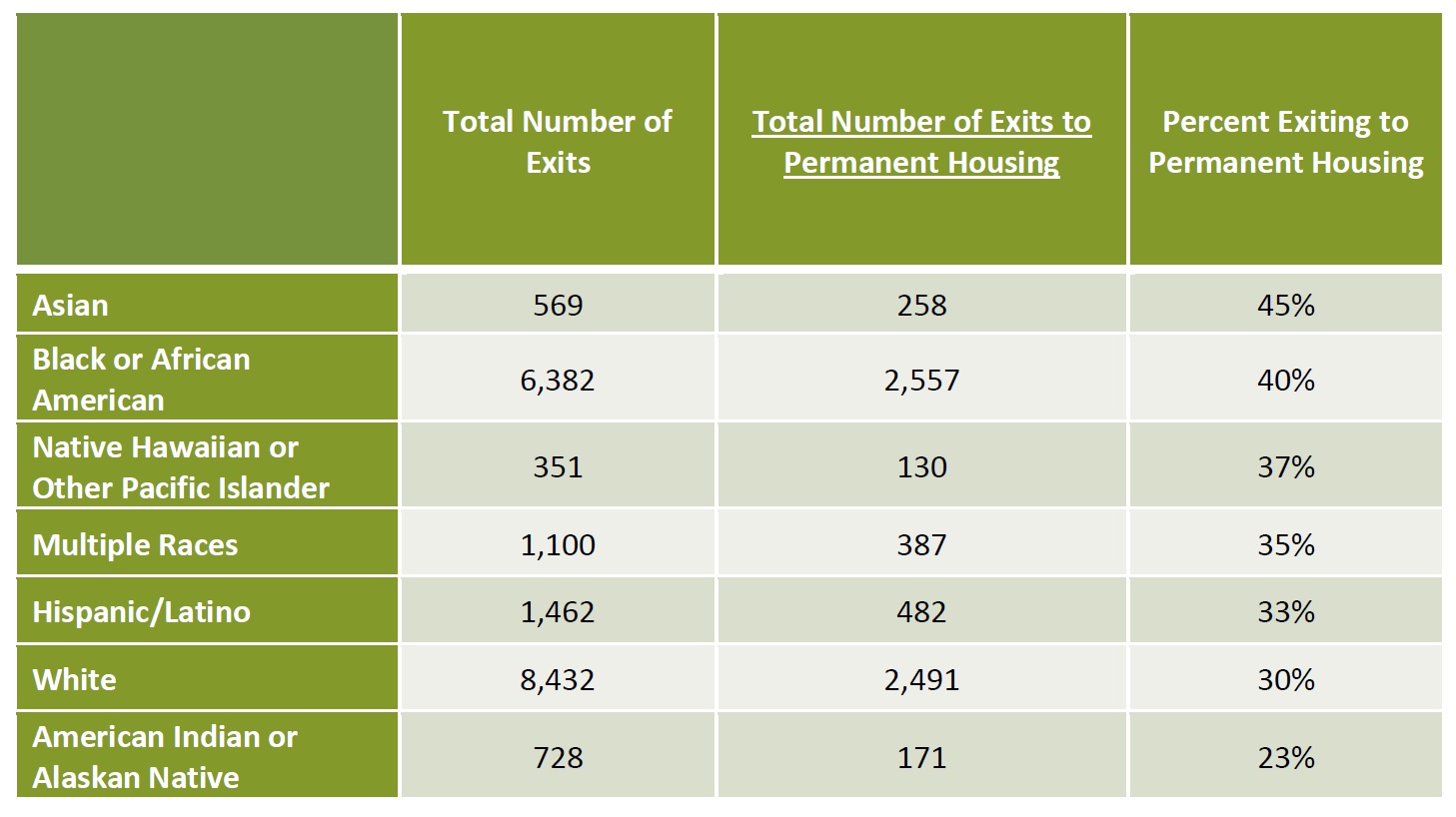 HSD has set two goals to address these:

A provider’s ability to help drive these changes will be one of the selection criteria for funding.

All providers are required to enter data into the shared county-wide HMIS system for collecting and tracking homeless people and the programs and services that engage with them. Providers will also be required to participate in the Coordinated Entry for All program to ensure that people entering the homeless system are quickly identified, assessed as to their needs, and referred to a personalized set of services to help them as soon as possible.

It’s hard to exaggerate the wholesale cultural change this represents. There are providers who have built close relationships with HSD that have allowed them to avoid these requirements for many years, and in the process any real accountability. But the Focus Strategies and Poppe reports last summer pointed out in stark terms that until that culture was reformed, there would be little progress in addressing the homelessness crisis. The city promised in its Pathways Home plan that it would embrace this kind of reform, including re-bidding contracts.  This morning, Mayor Murray called this new approach “hyper-coordinated,” as it represents a much tighter, data-driven approach to funding and evaluating services that will allow high-performing programs to thrive and low-performing ones to fall by the wayside.

But that’s not to say there won’t be issues. Here are a few we can expect to see in the months to come:

Most of the rest of this year HSD will be busy executing on the RFP and selecting its new set of providers to fund. In July, it will hold three information sessions with prospective applicants, and the Nonprofit Assistance Center will be providing free technical assistance to applicants through August. Proposals are due September 5th. In October and November, HSD’s review panels will be convening; those panels will include representatives of HSD’s partners (King County, All Home and United Way, philanthropic organizations, and the business community) as well as consumers and those with the lived experience of homelessness. The city plans to notify providers of funding awards on Monday, November 27th, with the new contracts starting on January 1, 2018.

The Council members present for the briefing this afternoon (Bagshaw, Harrell, O’Brien and Burgess) reacted favorably and commented that they believed this was important progress. Bagshaw issued a statement in support today as well.