“We had hoped that today would be the final thumbs up from Judge Robart to allow us to continue to move forward with the implementation of the accountability legislation,” said Council member Lorena Gonzalez this afternoon in a hastily-arranged press conference. “And obviously we did not get that final approval.”

A hearing that began this morning with U.S. District Court Judge James Robart kindly joking with Gonzalez, Council member Tim Burgess, and SPD Deputy Chief Carmen Best quickly turned into an opportunity for all parties — and especially the judge himself — to vent their frustrations. 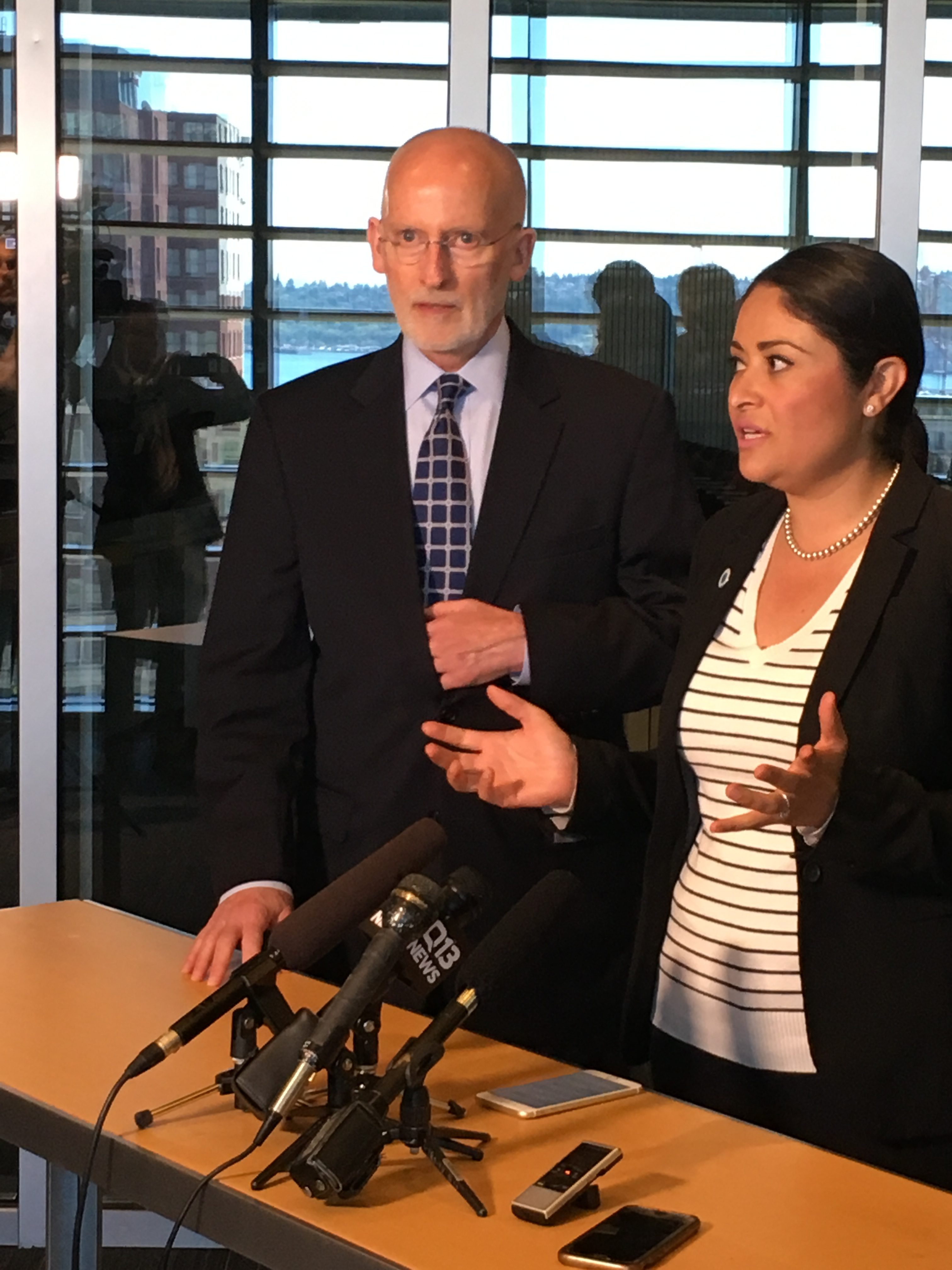 With both the DOJ and the CPC filing briefs last week recommending that Robart approve the pending police accountability legislation, many thought today’s status conference might be an easy layup. Robart quickly dispensed with that conceit, telling City Attorney Pete Holmes, “You’re giving me a work in progress and asking me to approve it.” The issue at hand is that some of the provisions of the proposed legislation are subject to collective bargaining with the two unions that represent police officers and supervisors: SPOG and SPMA. To Robart, who has now reviewed two versions of this legislation, that creates the possibility that if he approves the version currently in front of him, then subsequent negotiations with the unions will lead to further revisions and he will need to take a third turn at reviewing it — and possibly be forced to unwind provisions that he might approve now.

Beyond his own workload, it was clear that Robart had been following the local news. Referring to both the recent police shooting of Charleena Lyles and Mayor Murray’s executive order yesterday directing SPD to roll out body cams to all officers, he stated, “My frustration is apparent” that the unions had effectively blocked deployment of body cams despite the fact that he had approved the policy months ago. Robart also had choice words for the CPC, noting that they were also complicit in preventing body cams from being deployed due to their stated opposition. But the main focus of his anger was the unions, and he accused them of holding the legislation hostage for a pay raise. “The Constitution trumps everything else,” he said angrily. “Against Constitutional principle, labor contracts will fall… The citizens of Seattle are not going to pay blackmail for constitutional policing. I’m not going to back down from that.”

But Robart’s hands are somewhat tied, mostly because the unions are not parties to the consent decree. As SPOG and SPMA pointed out in a letter to Robart last August, the courts have ruled “a court may not enter a consent decree that imposes obligations on a party that did not consent to the decree.” Further, and directly on point, the Ninth Circuit ruled “Except as part of court-ordered relief after a judicial determination of liability, an employer cannot unilaterally change a collective bargaining agreement as a means of settling a dispute over whether the employer has engaged in constitutional violations.” So unless SPOG and SPMA join as parties to the consent decree case, Robart has little leverage.  The current contract expired in 2014; last summer the city and SPOG negotiated a new contract, but the SPOG membership overwhelmingly rejected it. In the immediate aftermath SPOG changed leadership, and according to the city there has been no progress on negotiations since then.

Robart noted that he was still unclear on two issues related to the proposed legislation: which provisions are essential for a system of constitutional policing, and which provisions are the subject of mandatory labor negotiations. This is an effort by the judge to narrow down the problematic areas, so that he can approve the rest of the legislation and start some pieces moving forward again.  As to which components are mandatory for collective bargaining, that is determined by state law, case law, and by the findings of the Public Employment Relations Commission (PERC), which intervenes and mediates in labor disputes involving public employees in Washington.  The list of mandatory topics certainly includes wages, hours and working conditions; according to SPOG the list also includes employee performance standards, disciplinary procedures, and civilian oversight of potential disciplinary matters and the disciplinary process. “Working conditions” alone is broad enough to touch on several components of the legislation.   Representatives from the city, the DOJ, and the court-appointed police monitor are scheduled to meet tomorrow and will begin work on the answers to these two questions so they can submit a formal list to Robart.

The city can also invoke the “nuclear option” and declare an impasse in labor negotiations. According to state law:

If no agreement has been reached sixty days after the commencement of such negotiations then, at any time thereafter, either party may declare that an impasse exists and may submit the dispute to the commission for mediation, with or without the concurrence of the other party. The commission shall appoint a mediator, who shall forthwith meet with the representatives of the parties, either jointly or separately, and shall take such other steps as he or she may deem appropriate in order to persuade the parties to resolve their differences and effect an agreement: PROVIDED, That a mediator does not have a power of compulsion.

If mediation fails, state law also dictates the next step:

If an agreement has not been reached following a reasonable period of negotiations and mediation, and the executive director, upon the recommendation of the assigned mediator, finds that the parties remain at impasse, then an interest arbitration panel shall be created to resolve the dispute.

The law is this specific because police officers are prohibited from labor strikes; the legislature intentionally enacted these provisions to ensure that any labor dispute involving uniformed officers can be driven through to a resolution where the officers are at an equal footing with their employers. In this case, SPOG actually has more leverage than the city, but that might be a fleeting advantage since they are now seen as the impediment to the police reform the community is demanding. Even if Robart can’t dictate terms to them, they are on the path to being convicted in the court of public opinion.

Neither Holmes, Gonzalez, nor Burgess were willing to speak today as to whether the city would take the step of asking for mediation or arbitration to break the logjam with SPOG or SPMA. Partly that was to protect the confidentiality of the negotiation process — another controversial topic of late. And Holmes would not commit to how long it would take to get the requested list to Robart — though he is strongly motivated to move quickly. Robart adjourned the hearing this morning without making any rulings, and didn’t set a timetable for next steps, so everything is on hold until he gets his list and decides what he wants to do next.

Other interesting notes from today: