Seattle Mayor Bruce Harrell held a press conference late Friday afternoon, once again flanked by city department heads and his family members, to deliver the news that he has decided to decline to serve as Mayor of Seattle through the end of November. But his first 48 hours in office have been busy: he also unveiled four executive orders that he signed today. 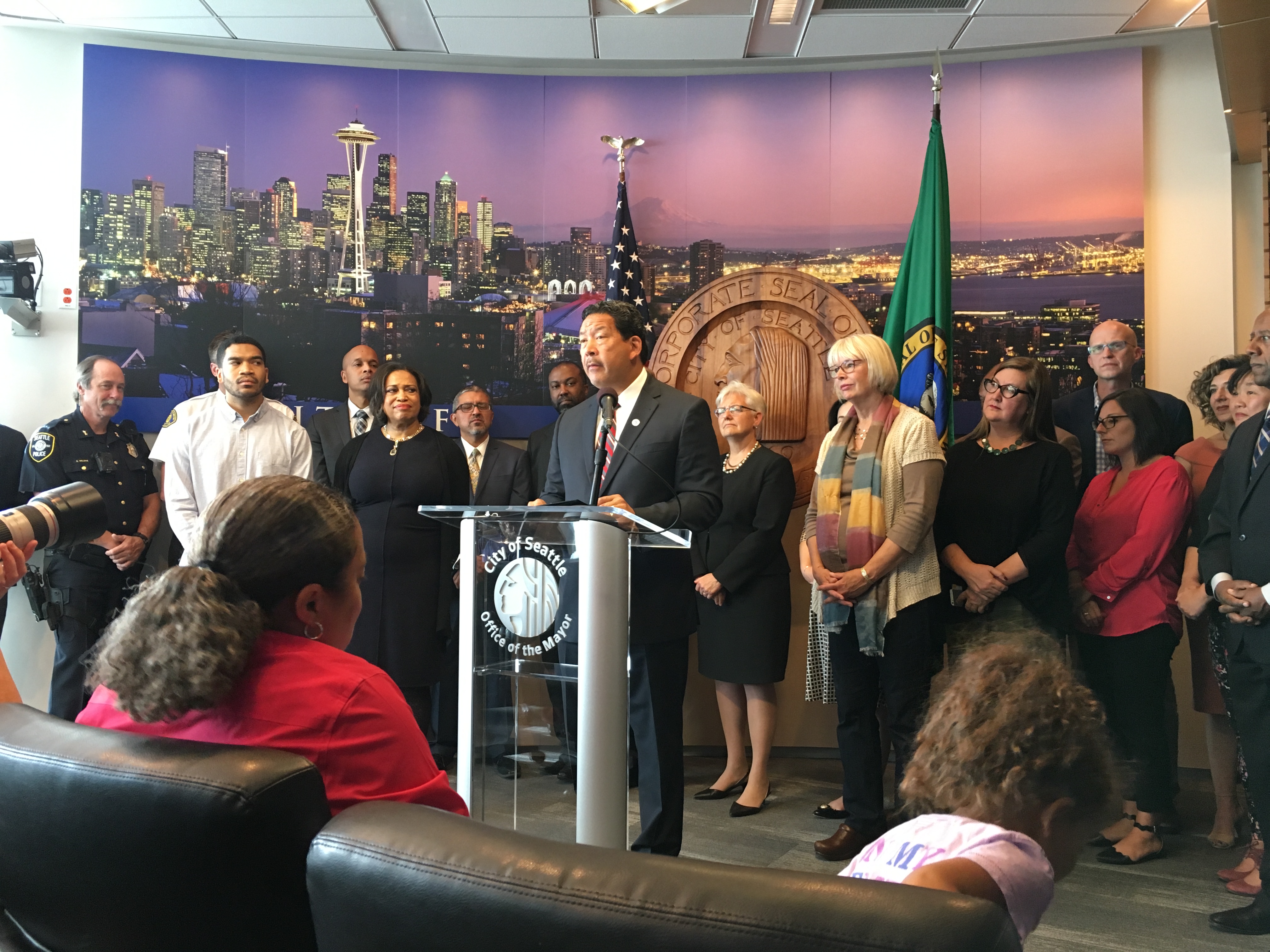 Since Harrell has declined the interim Mayor role, he can return to his elected position as District 2 City Council member and Council President just as soon as the City Council voted to select another Council member to serve in his place. That process begins in earnest on Monday. Council President Pro Tem Lorena Gonzalez issued a statement moments after Harrell’s announcement explaining how she intends to proceed:

“The City’s Charter, Council Rules and Governance Resolutions also give us direction as to how we fill the vacancy of a Councilmember, which in this case is created by a Councilmember serving as Mayor. While the City Charter, Article XIX, Section 6, creates a 20-day timeframe in which to fill a Council vacancy by a majority vote of all Councilmembers, the City Charter gives the Council flexibility as to the precise process for filling a vacancy created by the Council President’s or other Councilmember’s departure from City Council.  While then-Council President Harrell developed a Succession Plan memo with a recommended schedule and course of action last month, that schedule is not required by the Charter or the Council Rules and is therefore not binding.

“As Council President Pro Tem, after reviewing historical precedence and consulting with the City Attorney’s Office and the City Clerk, I believe that there are at least two viable options this Council can pursue when a Council vacancy is created by a Councilmember accepting the position of Mayor.

“Option B: The Council may take all or part of the full 20 days to identify, vet and appoint a new Councilmember.  Under Option B, the Council may choose to publicly solicit applications from interested candidates, identify a slate of finalists and require those finalists to participate in a public process before the Council nominates a finalist for a vote by Full Council.

“On Monday, September 18th, during the Council Briefing at 9:30 a.m., the Council will discuss these options to fill an inevitable vacancy created by Mayor Harrell’s declination of the position of Mayor.

“Also on Monday, September 18th, during the Full Council Meeting at 2:00 p.m., I intend for the Council to cast a vote to elect a councilmember to be the Mayor of Seattle.  If no selection has been made within 20 days, the Council must meet and vote every day thereafter until a selection is made.

In short: she will push the Council to vote on Monday afternoon to appoint a new Mayor. Once that is done, she will begin the process of selecting a replacement Council member, after taking their temperature Monday morning on whether to “go fast” or “go slow.”

The two leading candidates to become Mayor are Tim Burgess and Gonzalez herself. As I’ve written before, Burgess is retiring from the Council at the end of his term, but he is the Budget chair and is poised to lead the Council through the exhaustive 2018 budget development process beginning next week. If he were to be appointed Mayor, then running the budget process would fall to Council member Lisa Herbold Budget committee vice-chair. She is very familiar with Council budget development, having served on the staff of former Council member (and former budget chair) Nick Licata before she was elected to the Council in 2015. However, the budget chair has significant influence over the outcome, and it’s unclear whether Burgess would want Herbold to wield that influence.  As an aside, whoever wins the November election for Burgess’s Council seat would take office as soon as the election results are certified at the end of November.

Gonzalez doesn’t have the depth of experience in city government that Burgess has, but is running for re-election this year and so (assuming she wins, which looks likely) would be right back in her Council seat at the end of November, filling her own vacancy. But she also needs to run a campaign for the next six weeks, on top of her Council duties. It’s also worth pointing out the Gonzalez briefly flirted with the idea of running for Mayor last spring after Ed Murray announced that he would not seek reelection.

“I intend to withhold comment on my intentions for considering appointment to the Office of the Mayor until the Full Council convenes on Monday.”

And Gonzalez is silent (so far) on her ambitions. But you can be sure that the nine Council members will have many one-to-one conversations this weekend as they jockey for position.

Two days ago I was fairly sure that Harrell would decline and Gonzalez would be appointed Mayor. I was right on the first point, but on the second with the new information this afternoon it’s less clear whether it will be Burgess or Gonzalez sitting in the Mayor’s chair come Tuesday morning.

In the meantime, Harrell has made the most of his short stint in the Mayor’s office. Stating “these things need to get done,” and “It’s more important than me,” he signed four executive orders this afternoon to address significant concerns and to move forward issues on his personal agenda.

The first one  relates to the controversial King County Youth Services Center project, which has been the source of regular protests by activist groups. Harrell has championed the cause of derailing the project, though it is largely out of the city’s hands since the project is under the direction of King County and was approved by voters. As Mayor, though, he has decided to take a “carrot, not stick” approach. Citing the report by UW’s Dr. Eric Trupin on reducing the use of secure confinement on youth, his executive order directs the Office of Civil Rights to convene a task force to “identify and define best practices in alternatives to youth detention and identify resource opportunities to support any King County effort to redesign the planned Youth Detention Center and reach our shared goal of reaching zero use of youth detention.” It also directs the Office of Housing to “identify housing options throughout King County that could provide alternative options to youth incarceration.”

If that leaves you confused, you’re in good company; the press pool felt the same way. The gist seems to be that Harrell wants to create a set of alternative resources, including leased properties, that would divert so many people away from the Youth Detention Center to better places and programs that King County has no choice but to scrap its plan and start again. He has the support of King County Council member Rod Dembowski, who was standing at Harrell’s side during the announcement. Harrell did note that those resources may be outside the City of Seattle, and particularly to the south; he observed that there are many youth that commit crimes in Seattle but live elsewhere in the region.

The executive order doesn’t specify where the funds will come from to pay for expanded litter cleanup.

The third executive order is a two-part response to Amazon’s announcement last week issuing an RFP for a second headquarters site. First, it establishes an interdepartmental Business Retention Taskforce, led by the Office of Economic Development. The taskforce’s goal is “to coordinate efforts and align resources that support a vibrant, thriving and resilient community, that in turn supports business retention and expansion.” The taskforce will look at several issues, including:

Second, the order directs the Office of Economic Development to formally respond to Amazon’s RFP, pitching Seattle as the location of the company’s second headquarters campus.

The fourth executive order is intended to ensure that the city is properly addressing the risks of data breaches by cyberattackers. It directs the city’s Chief Technology Officer to:

undertake an effort to assess the risks related to the management, sharing, and protection of data under the conrol of or supported by the Seattle Information Technology Department on behalf of the City. This shall include assessing how data in its possession is protected, how data in repsonse to public records is provided, how it shares data by agreement, and how data is published to the City’s open data portal, data.seattle.gov.

It directs the CTO to issue a report by November 15 — an aggressive timeline to say the least, given the extensive data operations of the city.

Whether anything will come of these executive orders is unclear; they may be pushed aside as soon as Harrell leaves office next week, or when a newly-elected Mayor is seated in November. But if nothing else, we now know have four questions to ask Mayoral candidates Jenny Durkan and Cary Moon at their next debate.