Juarez has been working with the ALUV to “accelerate and enact HALA proposed zoning changes along the Aurora Avenue corridor in advance of the vote for city wide HALA changes sometime in 2018.”  The HALA changes would move the neighborhood toward “a vibrant residential community” with multifamily housing, pedestrian-oriented retail and services, and open space. According to the draft legislation, since 2014 half of permit applications within the Commercial 1, Commercial 2, and Neighborhood Commercial 3 designated zones in the urban village have included uses, including “mini-warehouses,” that are inconsistent with the intended direction for the neighborhood. There is concern that if the trend continues it will set back future efforts to reshape the neighborhood in the desired direction. 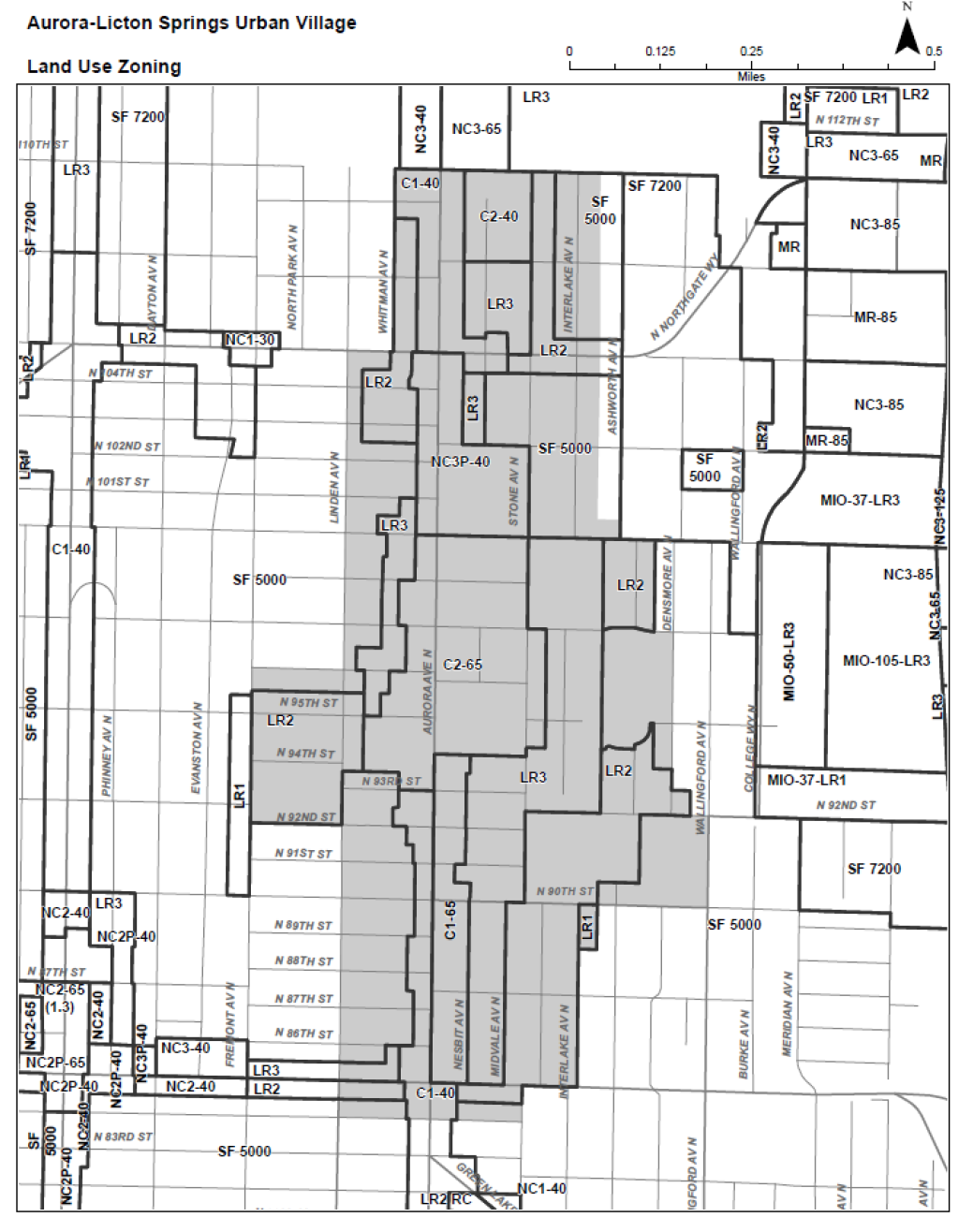 The ordinance declares a 12-month moratorium on accepting new permits in C1, C2 and NC3 zones in the Aurora-Licton Springs Urban Village for the following uses:

The moratorium doesn’t apply to any development project that is already in the permit process or has received its permit by the effective date of the ordinance.

The length of the moratorium is designed to synch up with the  planned schedule for the actual rezone of the area:

Normally, a moratorium of this type would require a SEPA review and a public hearing before it could be adopted. To get around that, the legislation is a self-declared “public emergency ordinance” that is “necessary for the protection of the public health, safety and welfare.” That excuses it from the SEPA review under Seattle Municipal Code. It also excuses it from holding a public hearing before the ordinance is adopted, though under state law it must hold one on the moratorium within sixty days of its adoption.  A moratorium is normally limited to six months, though it can be extended to one year if it is accompanied by a work plan for further studies (such as the planned schedule for the rezone above).

Juarez is stretching the definition of “public emergency” in establishing the moratorium, arguing that prohibiting permitting of car dealerships and mini-warehouses is “necessary for the protection of the public health, safety and welfare.” Passing the ordinance will certainly expose the city to lawsuits from commercial developers whose development rights are being curtailed. Given the direction of the long-term plans a moratorium makes sense, but using emergency authority to rush it through, skipping the public hearing and SEPA review is eyebrow-raising to say the least. None of its findings-of-fact and declarations in the legislation explain how mini-warehouses are a threat to public health, safety and welfare — they simply say the prohibited uses are “inconsistent” with the neighborhood plan, which has not yet been codified in the city’s land use code. The public hearing and SEPA review requirements are there for a reason: to stop the government from making exactly this kind of land use change quickly and quietly without public transparency.

Juarez is fast-tracking the legislation, and since it’s budget season and committees aren’t meeting, the legislation would be introduced on Monday afternoon, skip deliberation in committee, and come before the full Council for final adoption next Monday.