This afternoon, Mayor Tim Burgess delivered his proposed 2018 budget to his former colleagues on the City Council. Let’s dig in.

You can watch Burgess’ speech to the Council here, and you can find all the budget details here. Briefly, he highlighted the following items:

Of course, Burgess has only been Mayor for a week, and most of the budget was assembled by his predecessor, Ed Murray. Burgess only had the opportunity to make some tweaks around the edges; none of the line-items above are big-ticket expenditures.  For that matter, the Murray administration hardly started from scratch: last year the city wrote and a two-year budget including an endorsed (but not officially adopted) 2018 budget that served as the starting point for the budget unveiled today.

Let’s start by looking at revenues. 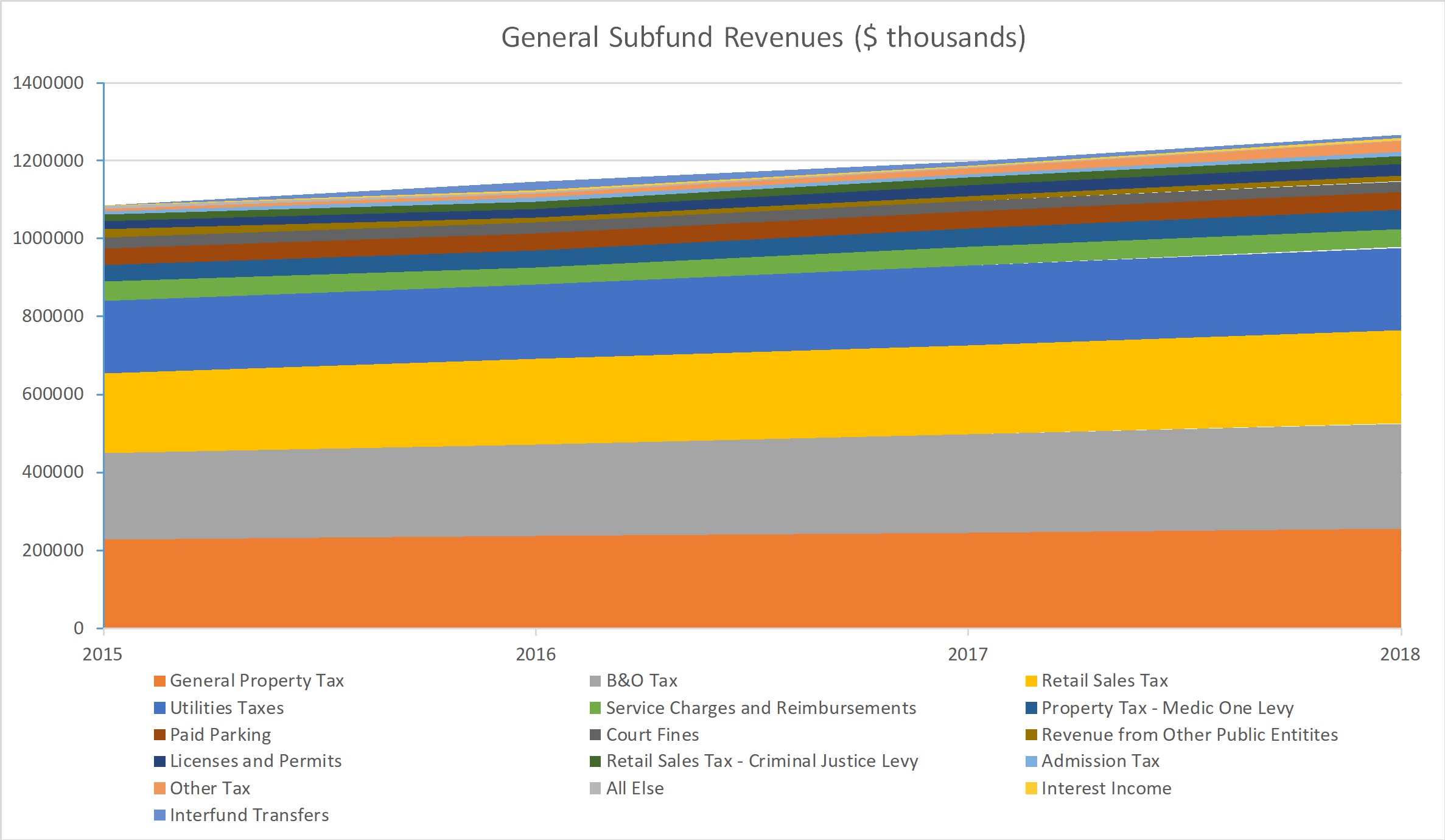 The City Budget Office delivers a detailed analysis of revenue projections on Thursday, but you can see from the above graph that there are no big changes here — revenues have been slowly and steadily increasing over the years and 2018 looks no different. And four sources continue to make up the vast majority of revenues: property tax, B&O tax, retail sales tax, and utilities taxes.

Most of the revenue categories are steady increases from 2017, with three anomalies:

In a nutshell: revenues are steady and unexciting. Whether they will remain that way past 2018, as employment growth and the construction boom both start to cool off, is a topic of discussion for Thursday.

Now on to the expenditures side.  This is a very conservative budget, increasing General Subfund expenditures only 1.7% over 2017 levels to about $1.26 billion (including capital expenditures, it’s a 3.2% increase to $5.57 billion). 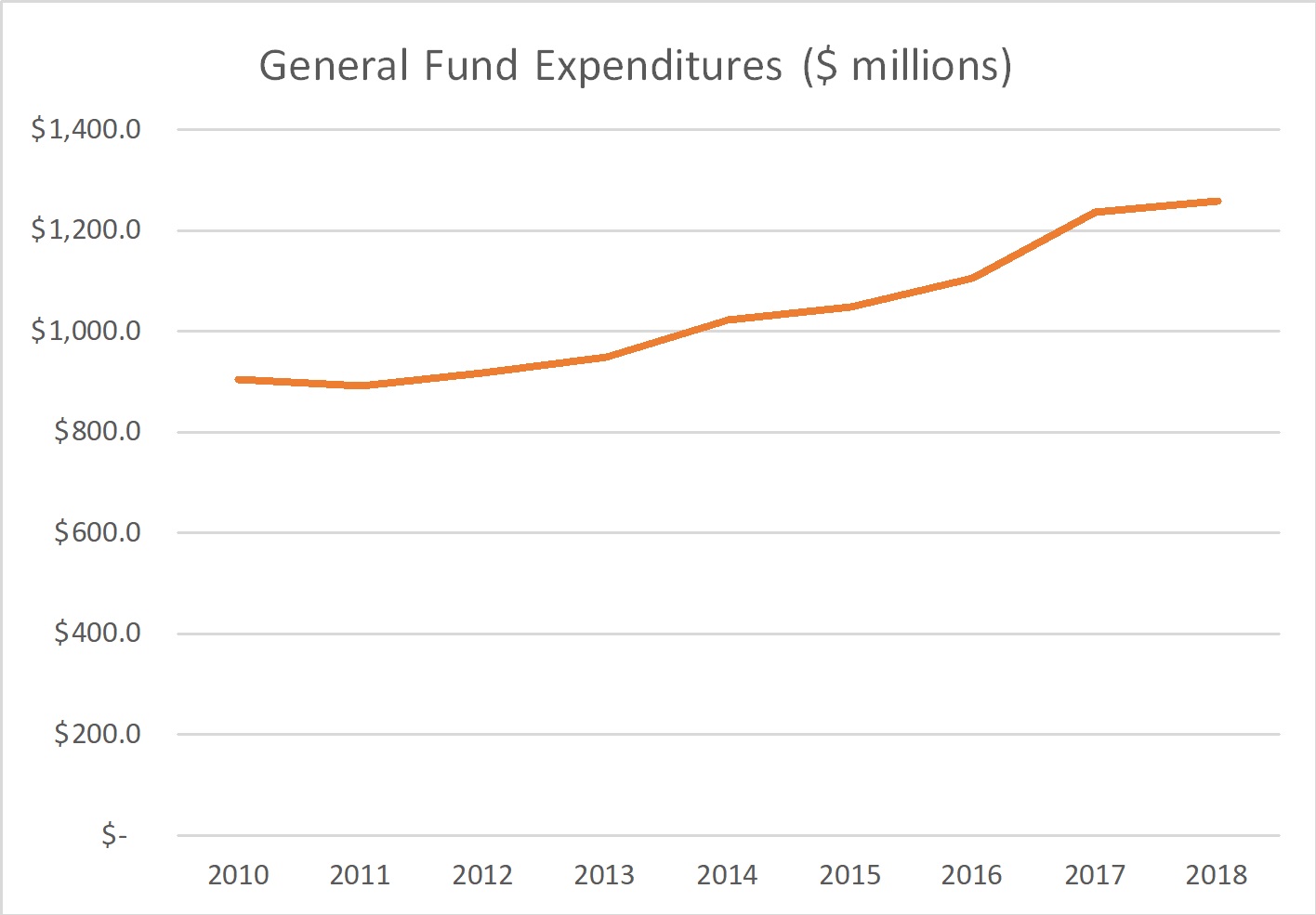 The distribution of funds is also largely unchanged from last year, even when including capital expenditures on top of operating funds: 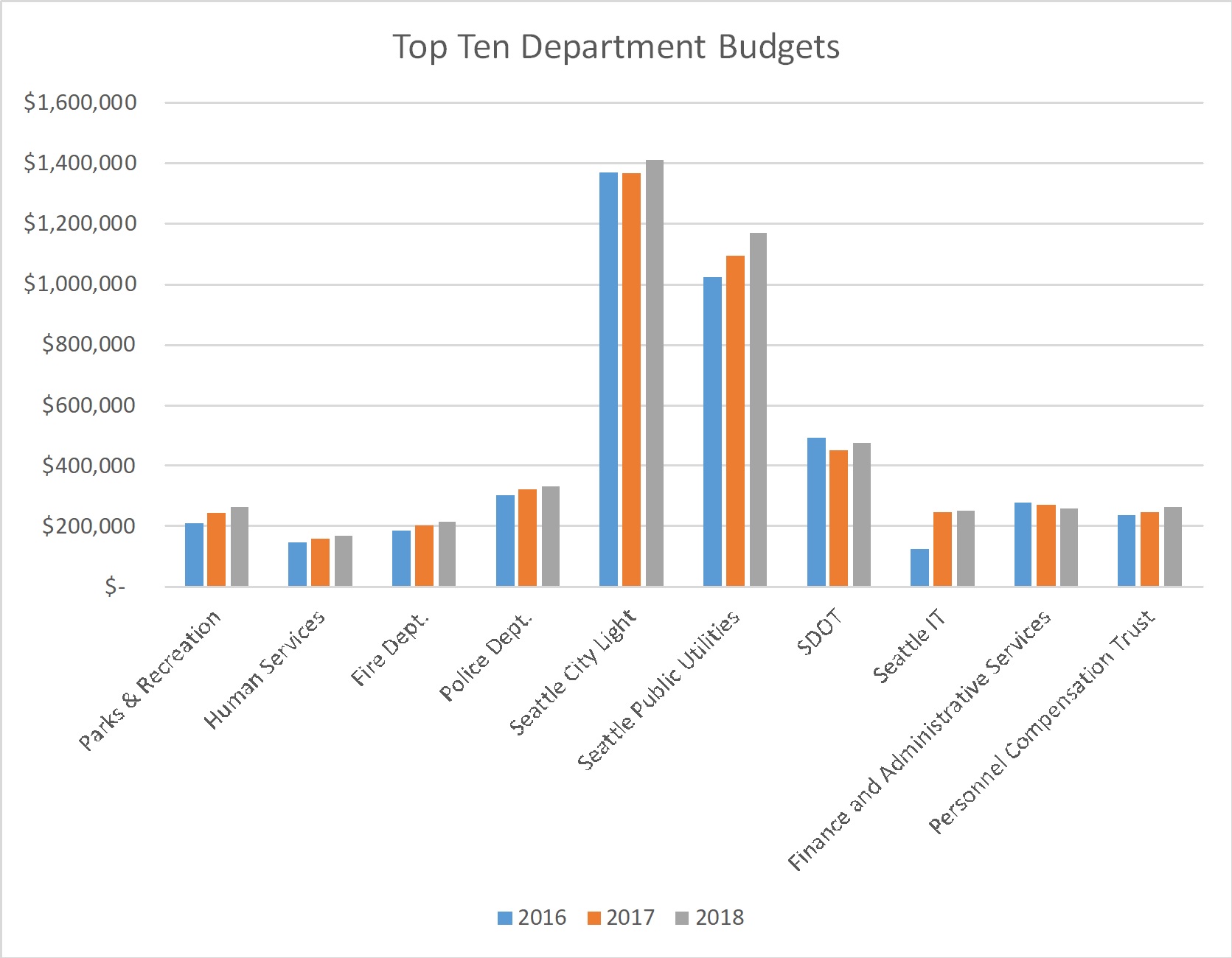 Seattle Public Utilities is rising because of large capital expenditures on the Ship Canal Combined Sewer Outflow project as required under a consent decree with the EPA, and on its part of Move Seattle Levy projects.

The top ten departments make up 86% of the city budget, and 115% of the overall budget increase from 2017 to 2018; that is, money is consolidating into the largest departments at the expense of the smaller ones. 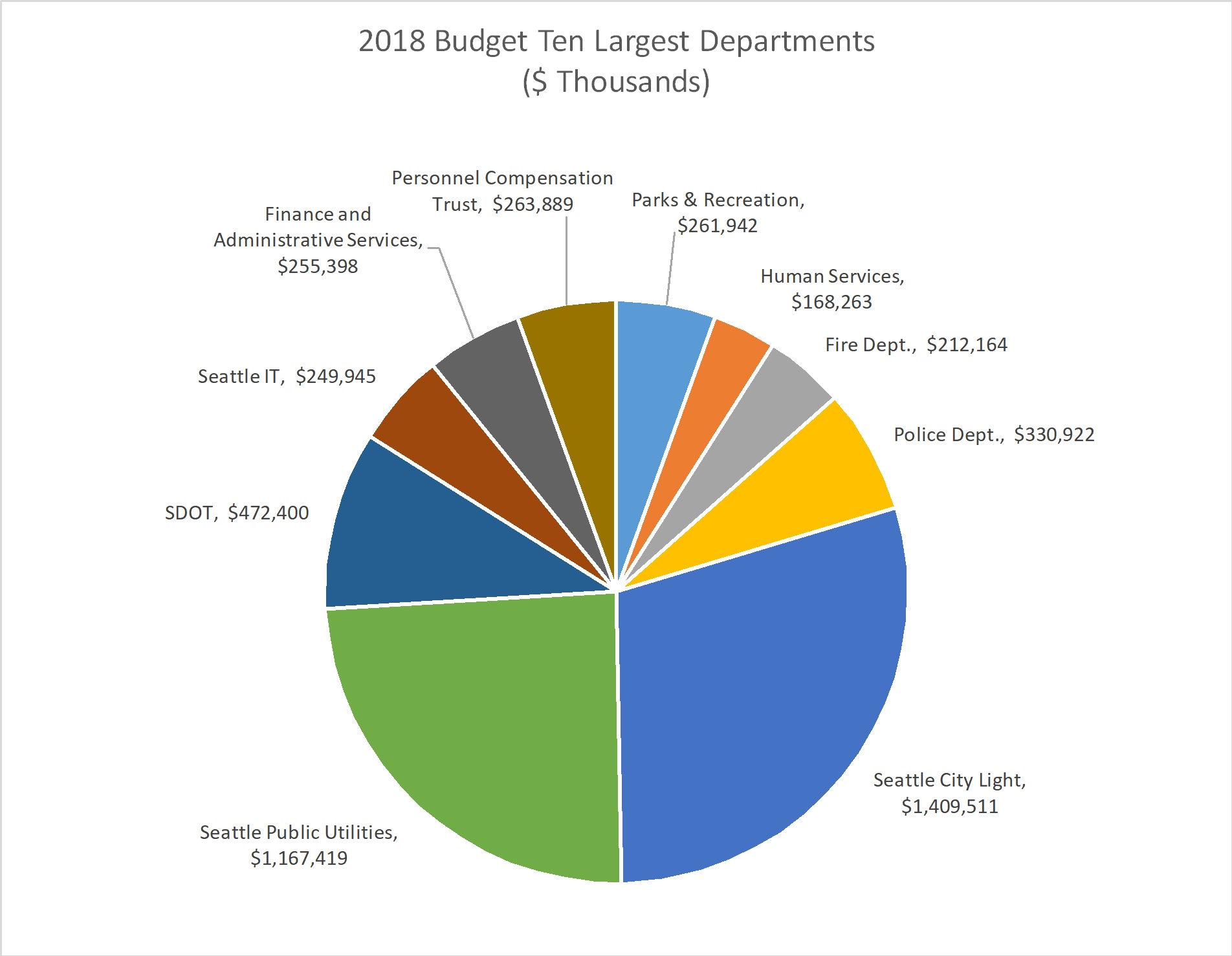 The two utilities (SPU and SCL) are 46% of the entire budget, and 54% of the top ten. Those are interesting statistics to understand the relative size of those organizations, but since they are operated as separate businesses with revenues and expenses that aren’t commingled with the rest of the city departments, it’s not directly relevant to managing their budgets.

Without new revenue sources, there isn’t a lot of exciting work to do on the 2018 budget; there are $68 million dollars of new revenues, and some required new expenses — in particular the Fire Department and OPA/OIG expenses, and inflationary adjustments across the board. That doesn’t leave the Council much to work with; they will mostly be spending their time on one or two percentage points of the entire budget.

If the recently-passed income tax survives its legal challenges, then it could provide a new infusion of cash in 2019 (it officially takes effect this coming January, but won’t be collected until April of the following year).  But without that, any big, bold ideas will require equivalent cuts to an existing program. Last year the Council members tweaked tax rates and license fees to increase revenues a bit, but they will need to get creative this year to find new sources of revenues.

Thursday the Council will get its first chance to grill the City Budget Office on the details of the Mayor’s proposed budget. Then it rolls up its collective sleeves and starts rewriting.