Late last week, the City Budget Office provided the Council with updates on its revenue projections as well as a verbal overview of the Mayor’s proposed 2018 budget. As the Council starts working on their own proposals this week, here’s a summary of what the budget office told them, as well as highlights of some of the more interesting details in the budget proposal.

Let’s start with revenue projections, which are driven largely by economic forecasts.

As a reminder, the post-Great Recession recovery in the U.S. has been one of the longest since World War II — but also the slowest, with average GDP growth around 2%. 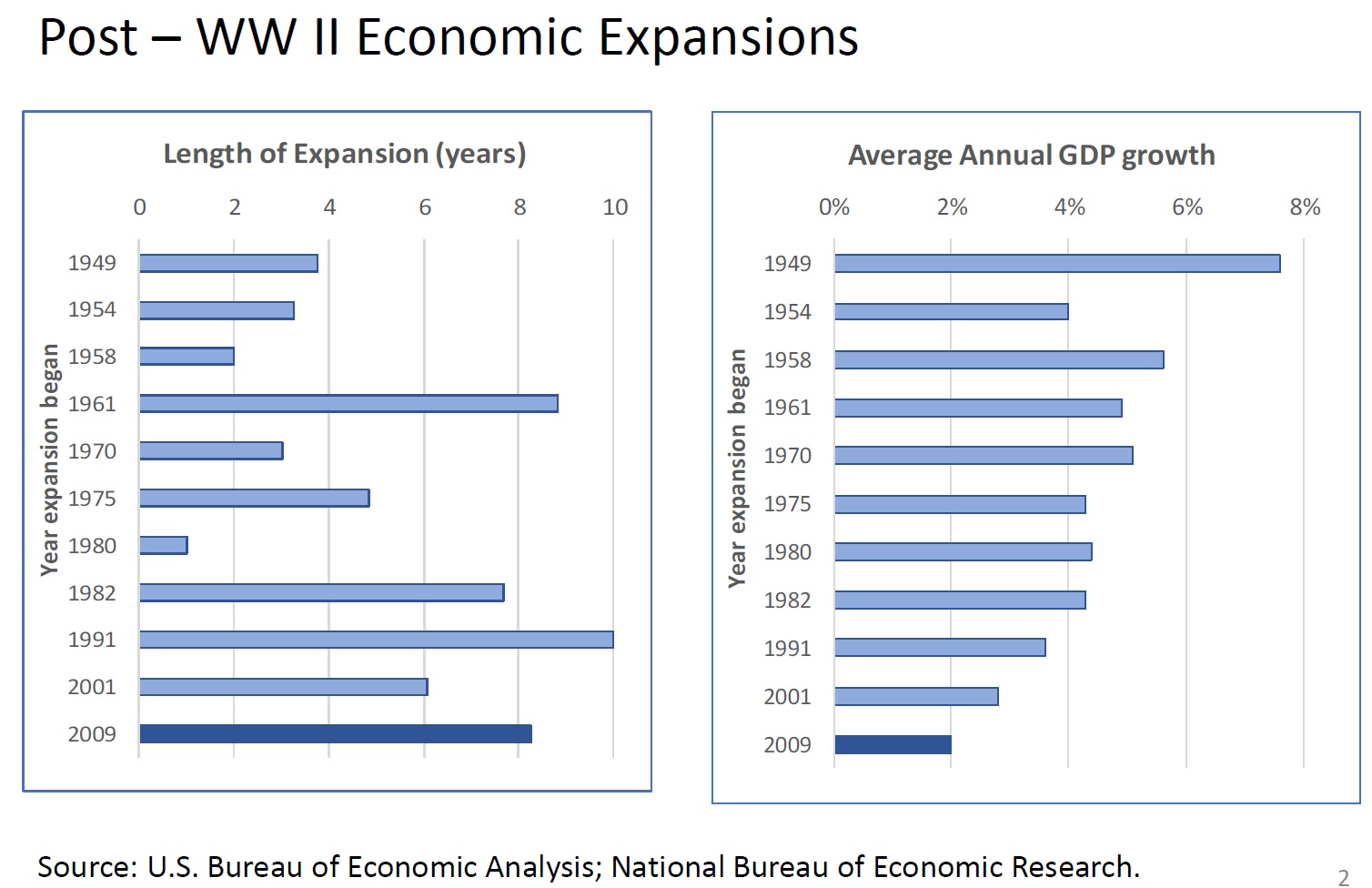 That is expected to continue over the next few years. The general consensus is growth hovering around 2%, with perhaps a slight bump up in 2018. 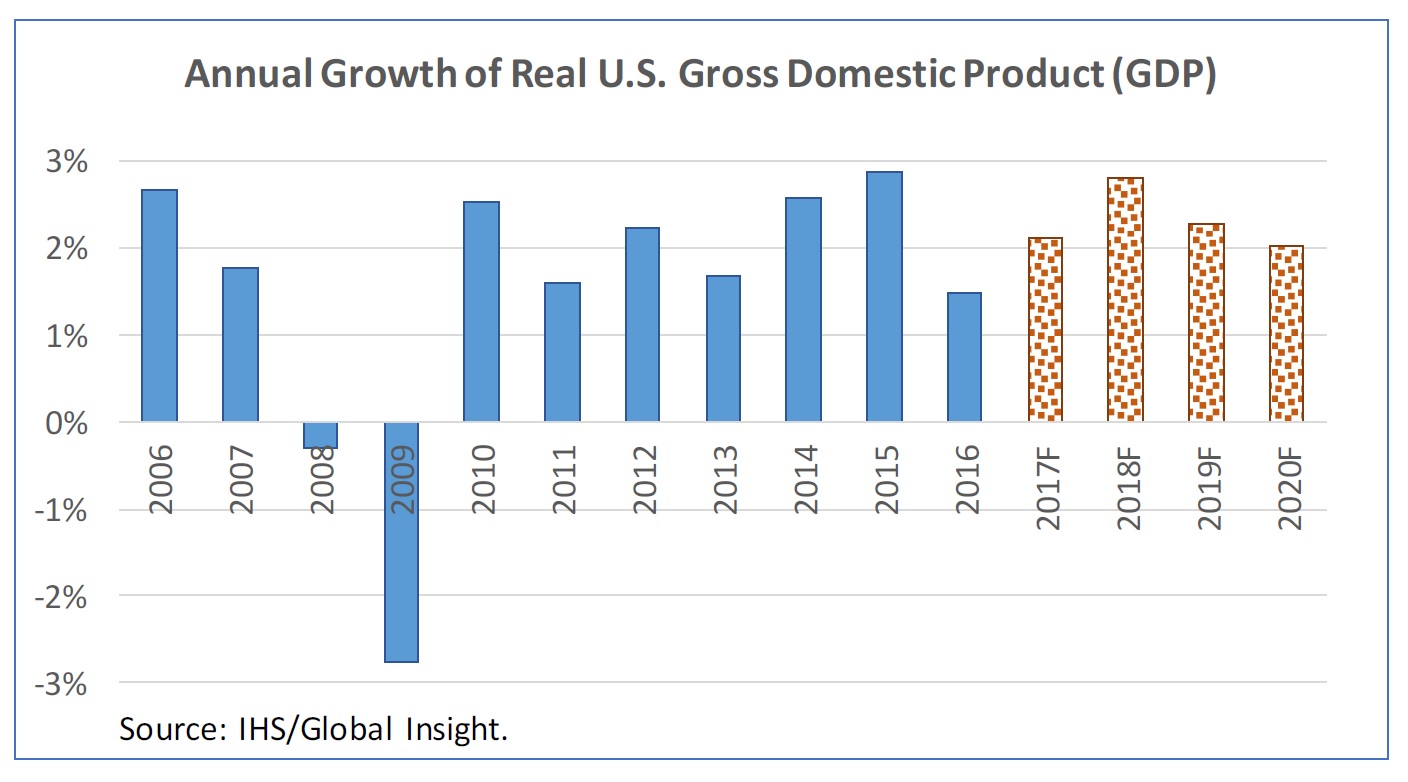 Economists suggest a 10% chance of a recession in 2019, with a 25% chance of a “policy-induced slowdown” — i.e. the Trump administration does something that hurts the economy, such as escalating tensions with North Korea or starting a trade war. Others, such as Windermere Real Estate’s Chief Economist Matthew Gardner, are now predicting a short and shallow recession beginning sometime in 2019.

Seattle’s economy has been faring just a bit better, with local employment as a proxy for overall growth. 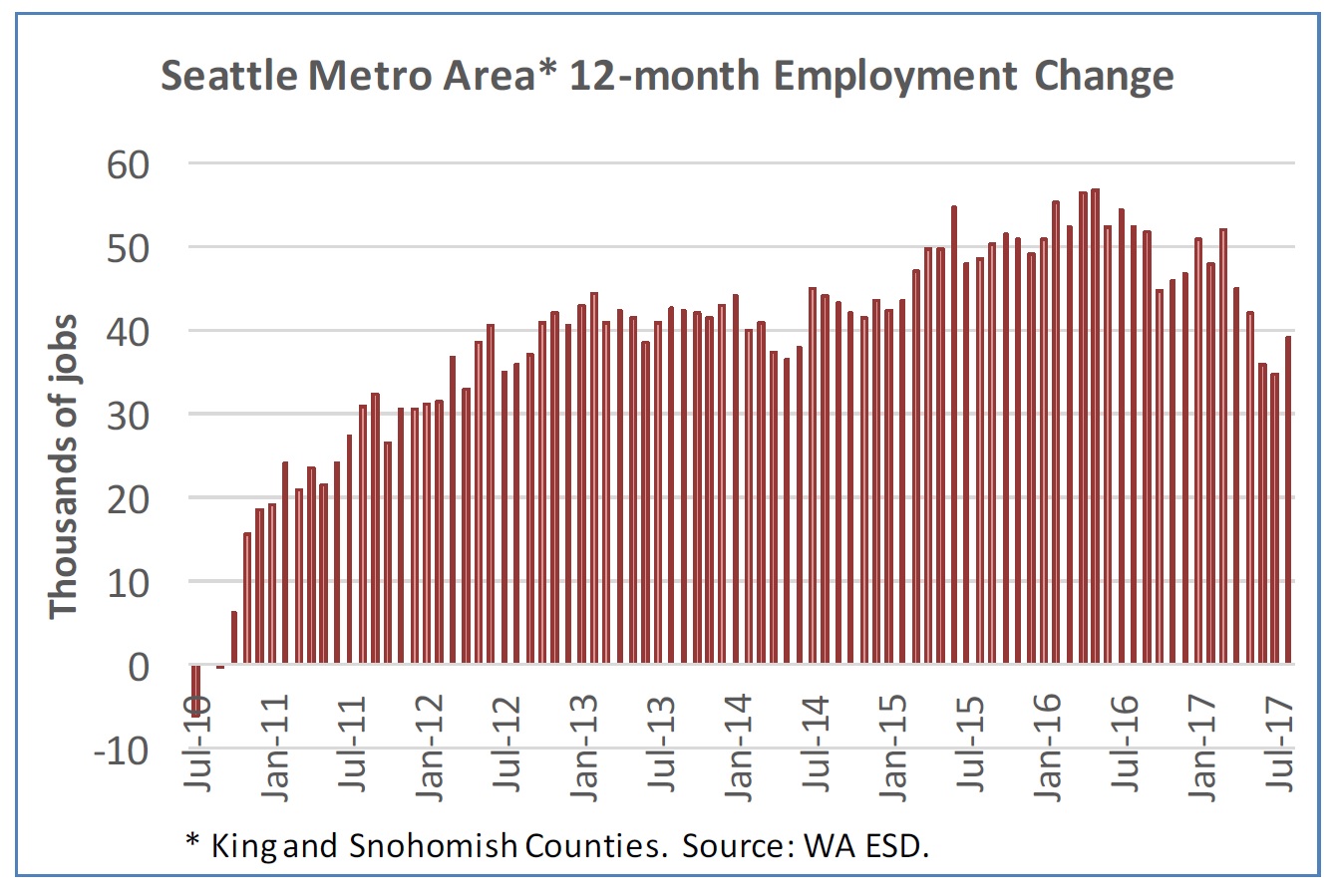 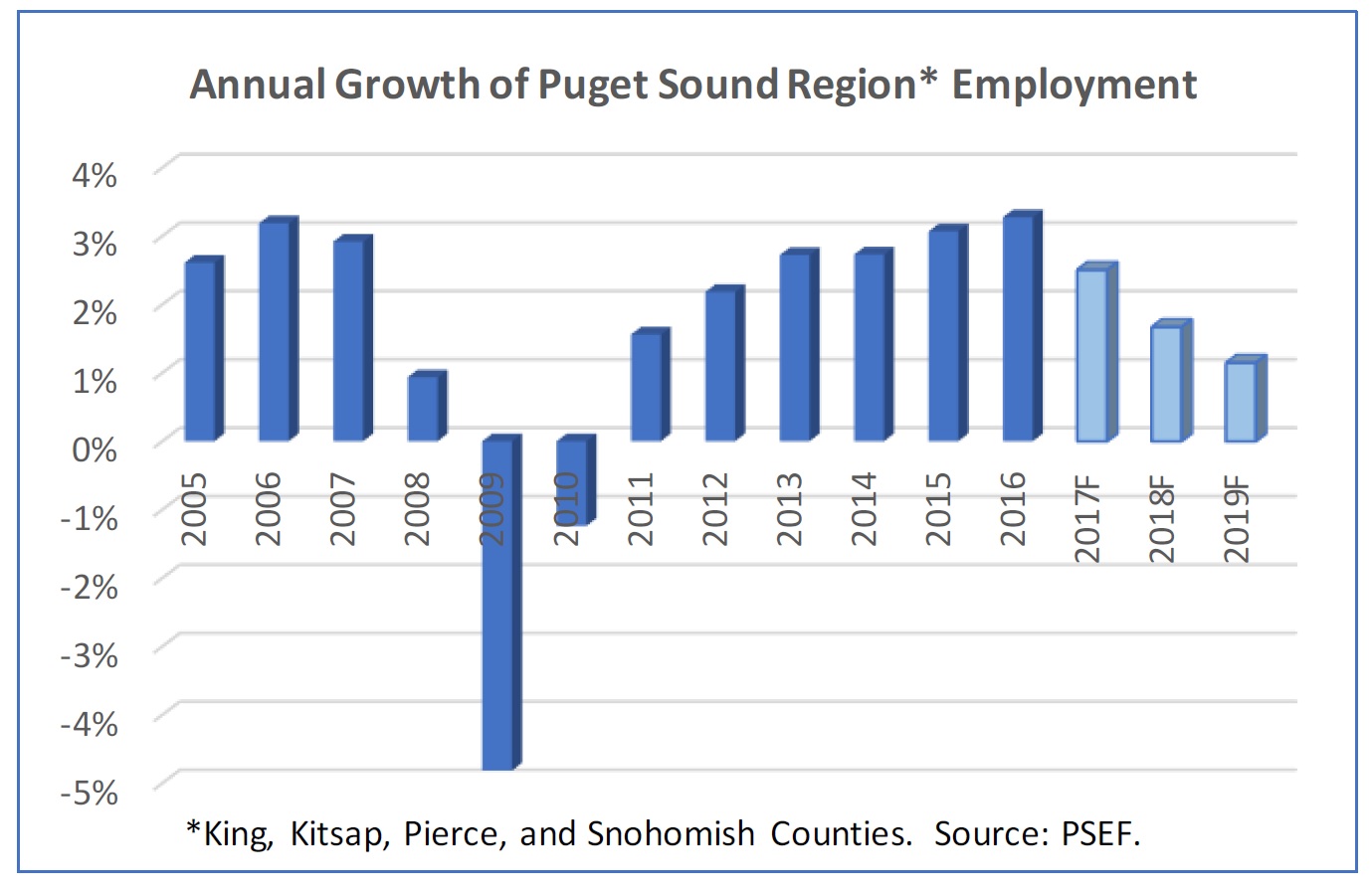 But as you can see, growth has been softening here as well, a trend that is expected to continue into 2019.  The trend is being driven by three sectors responsible for  the most local growth: aerospace (i.e. Boeing), non-store retail (i.e. Amazon), and technology (Microsoft and the collection of smaller companies moving into the area). 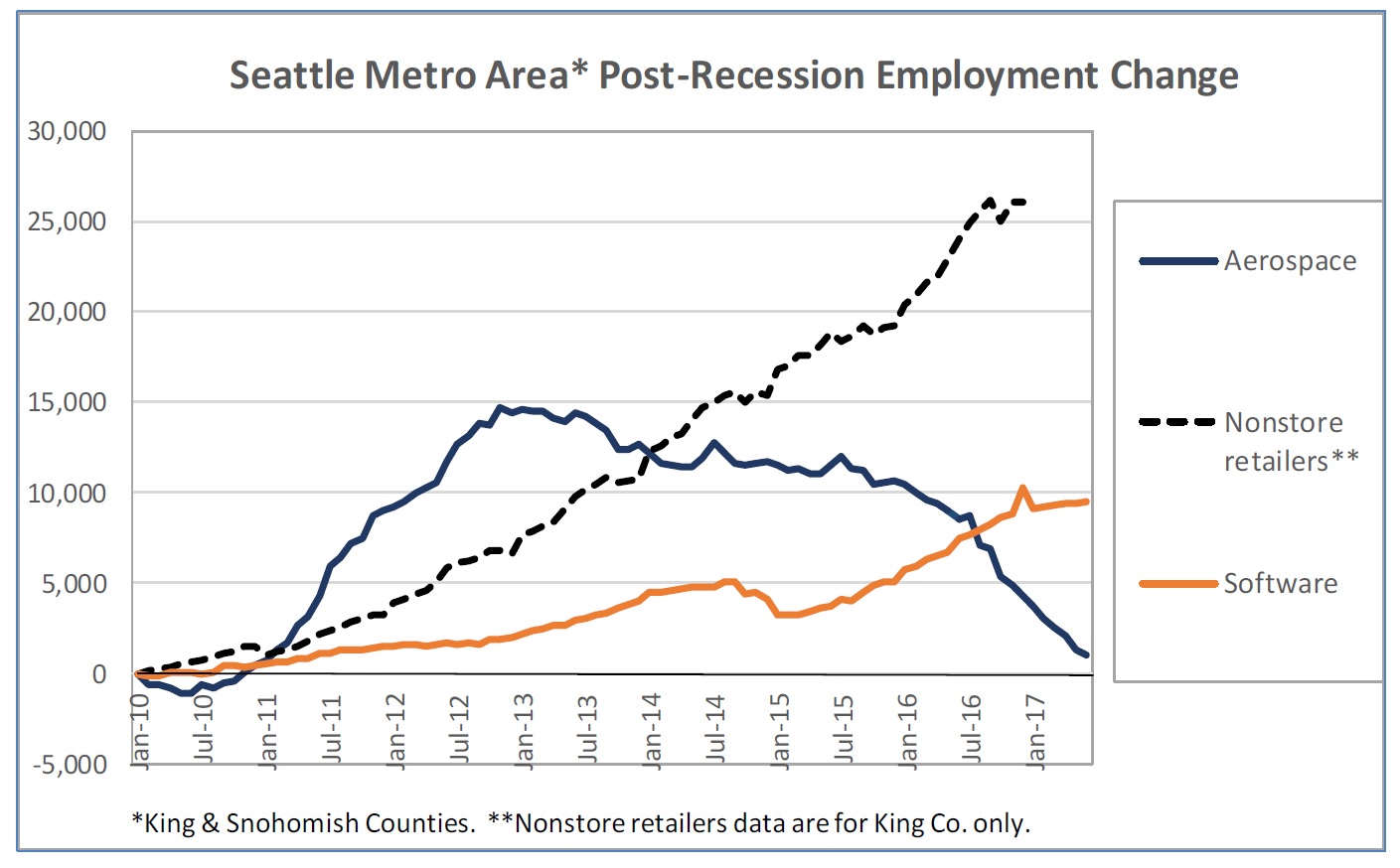 The big driver of employment growth in Seattle for the past few years has of course been Amazon, though technology has been a modest contributor as well. But Boeing has actually come full circle since the recovery started: after going on a hiring spree up through 2012, they have been reducing their workforce and are now back down to the size they were in mid-2010.

The other industry we need to look at to understand the local economy is construction. Count the cranes downtown, and you know we’re in a construction boom. But there are clear signs now that the boom as peaked and might even be starting to soften. For starters, construction employment has flattened. 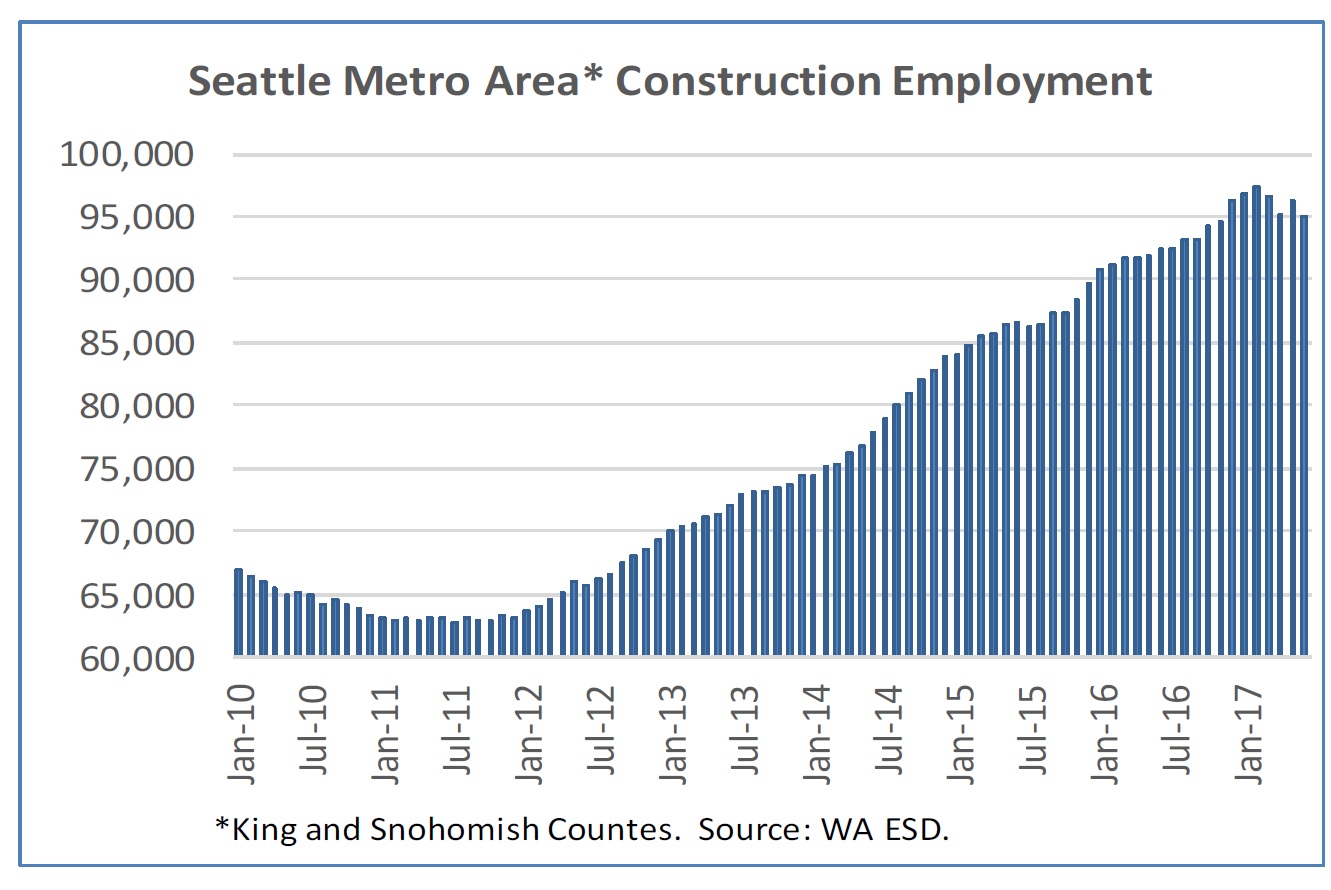 That may be at least in part to a shortage of construction workers, which has been widely reported recently. But construction permits have also flattened, which is a leading indicator for how much construction we’ll be seeing 1-3 years out. 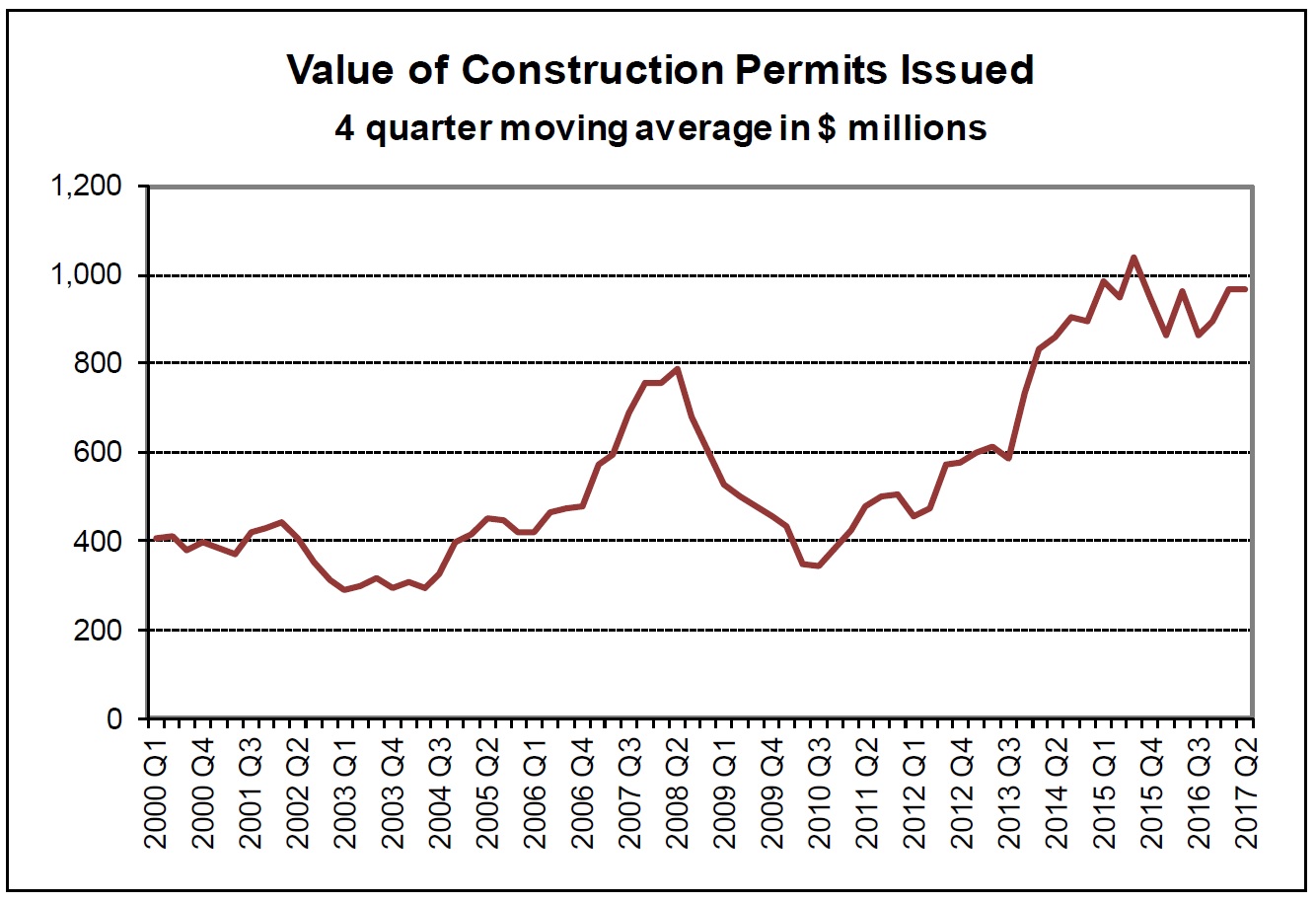 Construction is a major source of the city revenues. The business itself generates B&O tax, as well as sales taxes for materials purchased. It also increases property taxes as projects finish, and it creates Real Estate Excise Tax (REET) when property transactions complete (such as when a new home or building is sold). 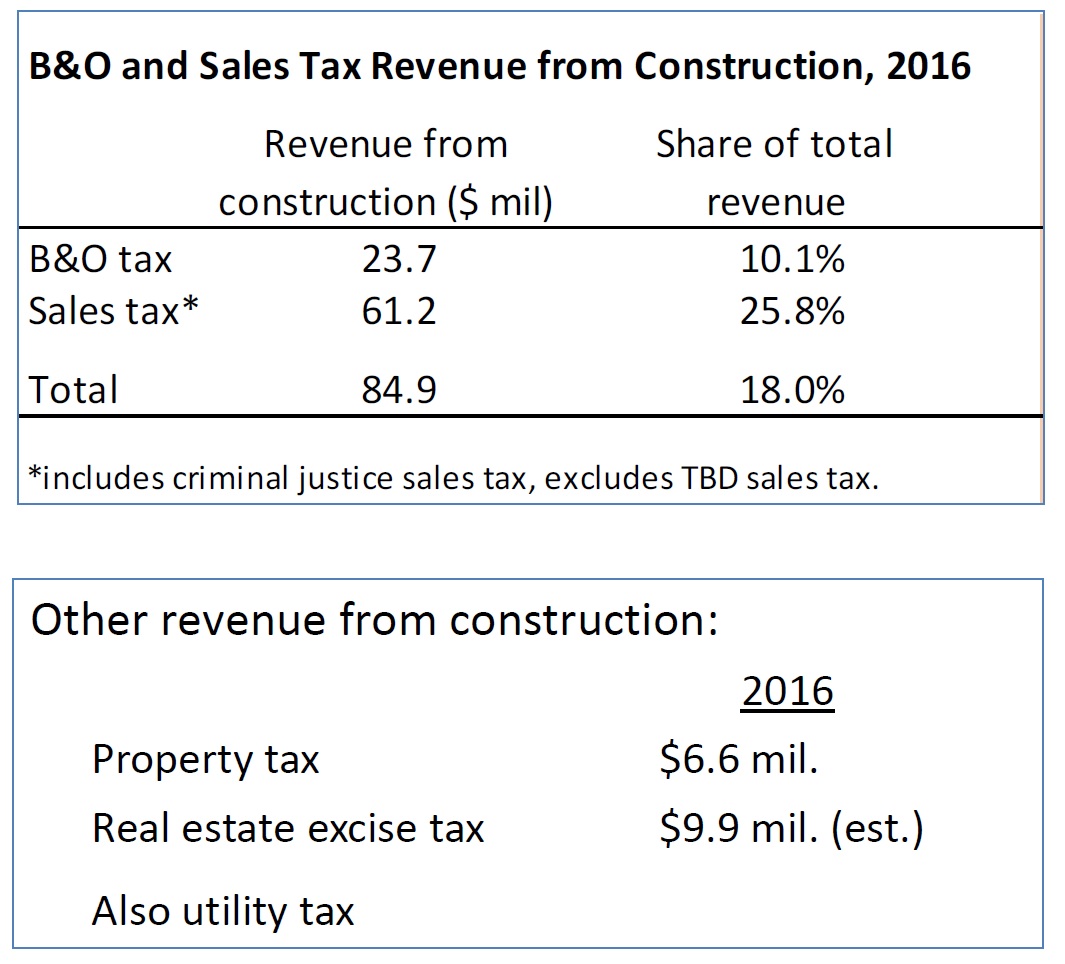 Real estate excise taxes are known to be a highly variable source of revenues for the city, since the sale of a single highrise tower (and not necessarily a new one) can contribute a substantial amount of REET to the city’s coffers. The developer-driven construction boom has significantly increased REET lately, with a significant shift to residential projects as the industry tries to catch up to the local housing shortage.  Unless the economy drives off a cliff again we’re unlikely to see the kind of sharp drop-off in REET that occurred in 2008, but even a softening in construction will likely see it drop a bit. The city budget deals with this by using REET revenues for one-off and short-term projects, such as major maintenance and refurbishment of buildings, rather than long-term commitments like debt service on municipal bonds issued by the city. There are plenty of short-term needs so the city won’t have trouble finding uses for its REET revenues; nevertheless it has already flattened and is unlikely to grow in the coming years. 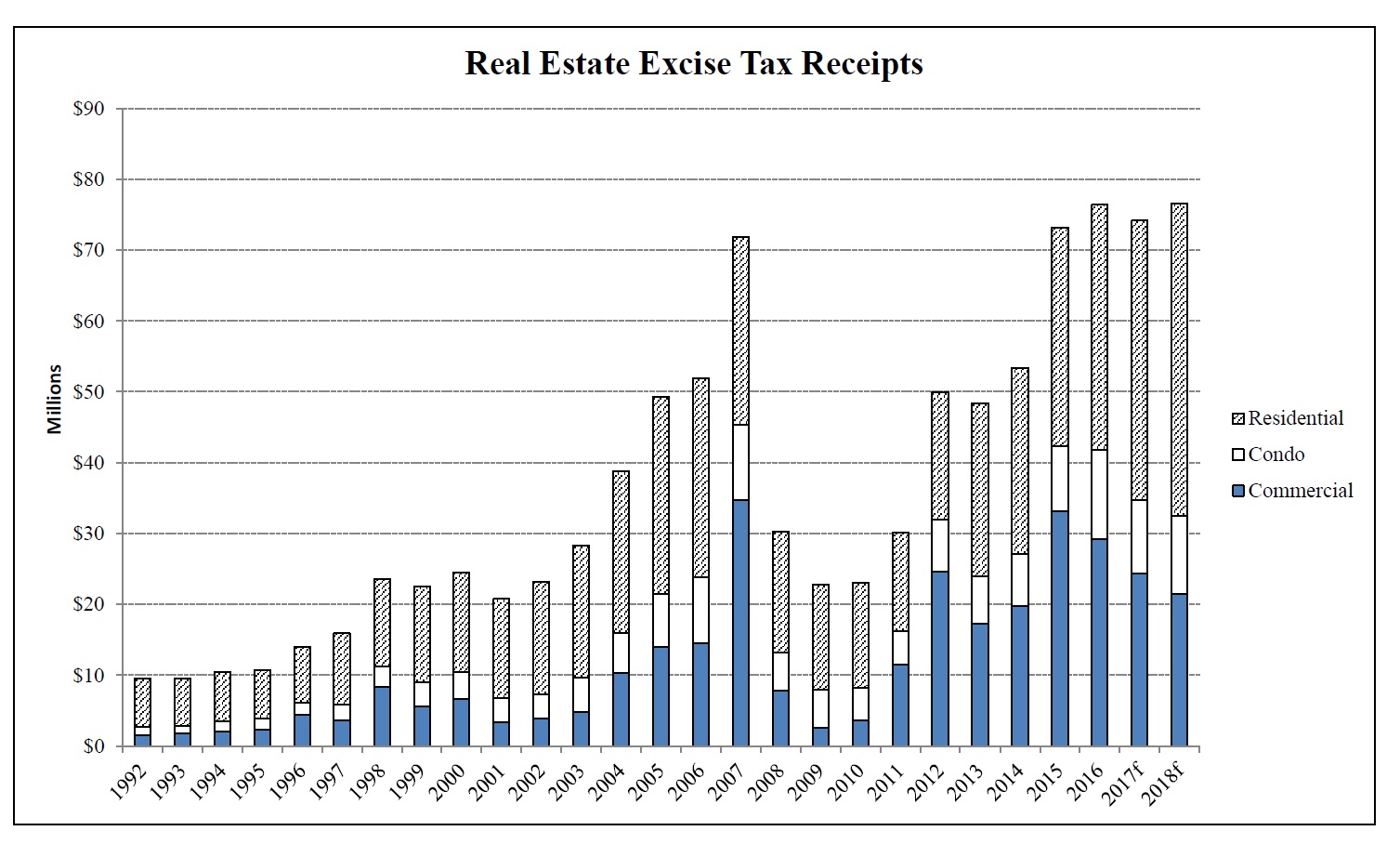 Sales and B&O taxes have also begun to soften, and are projected to flatten out at around 3% — a little above local inflation, but not a comfortable margin. 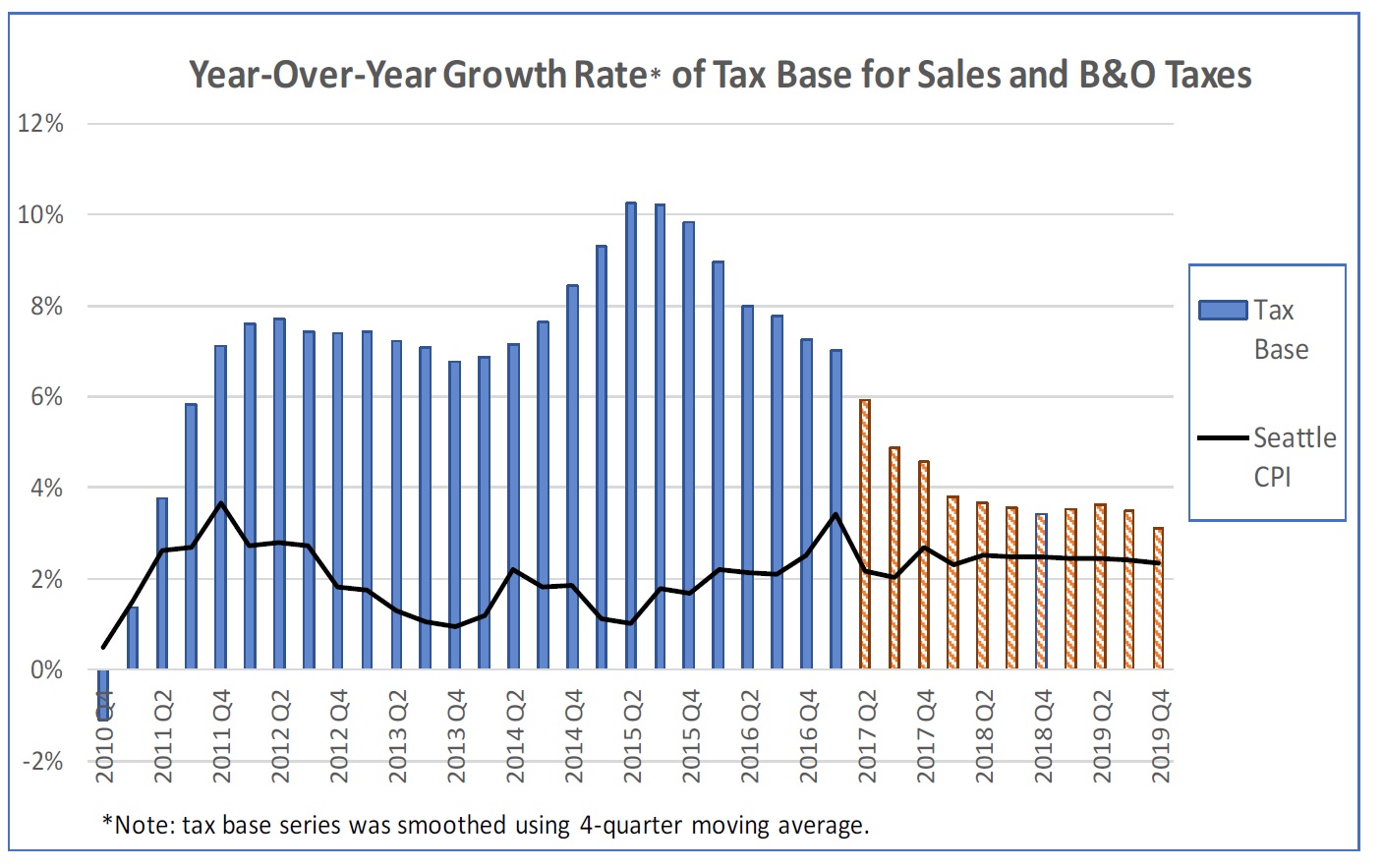 One of the reasons for this is the telecommunications tax. 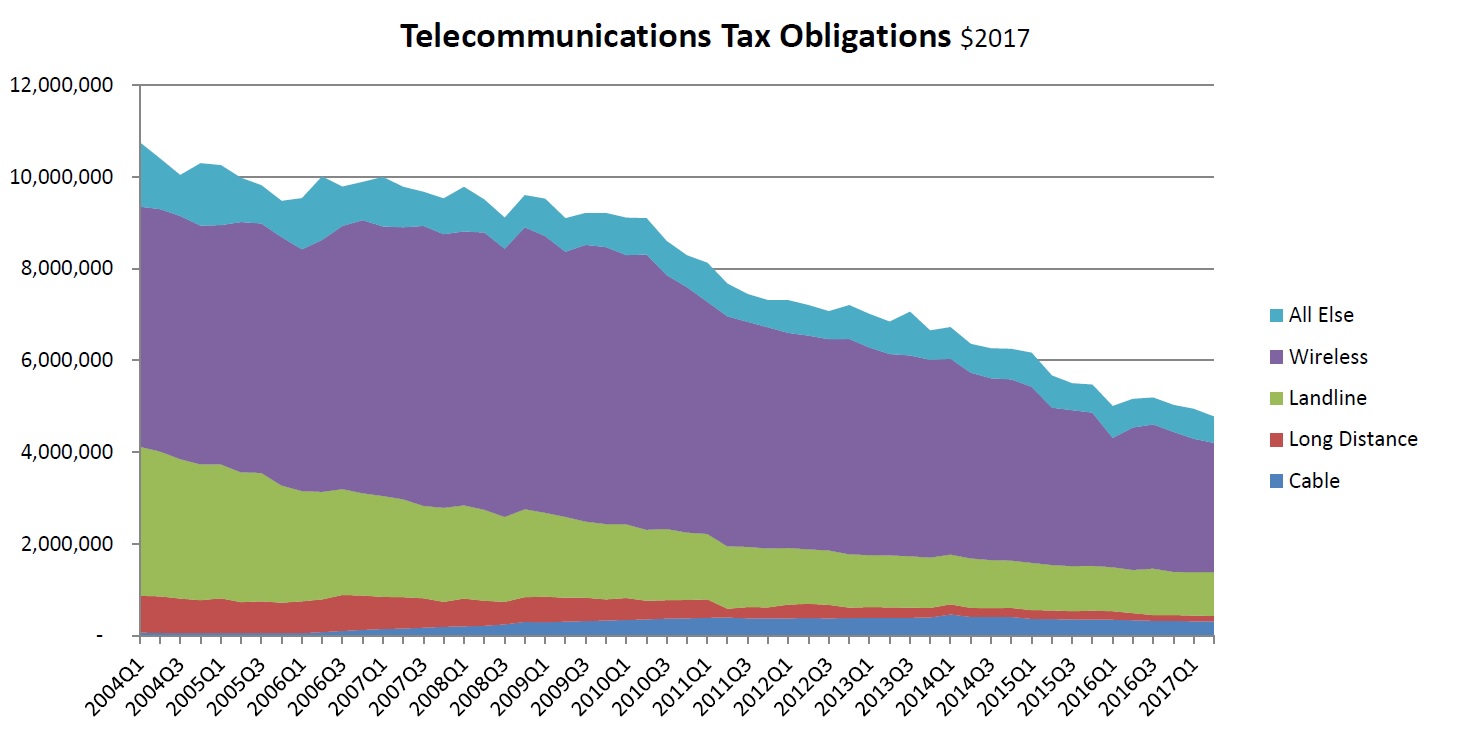 People have been dumping their landlines as mobile phones have become ubiquitous. Also, mobile plans have switched from charging for voice and text to charging for data, and federal law prohibits local municipalities from taxing data. So these shifts have significantly dropped telecommunications tax revenues over the past ten year.

So that’s the big picture: no good news, some potentially bad news a couple of years out, and “no news” in the immediate term. That means the revenue outlook for 2017 and 2018 has not dramatically changed from six months ago. The 2018 General Subfund revenue forecast is up $26.7 million, about 2% from the April estimate — and almost $15 million of that is from the new “sweetened beverage tax” recently passed.  And the REET revenue forecast has actually decreased slightly. 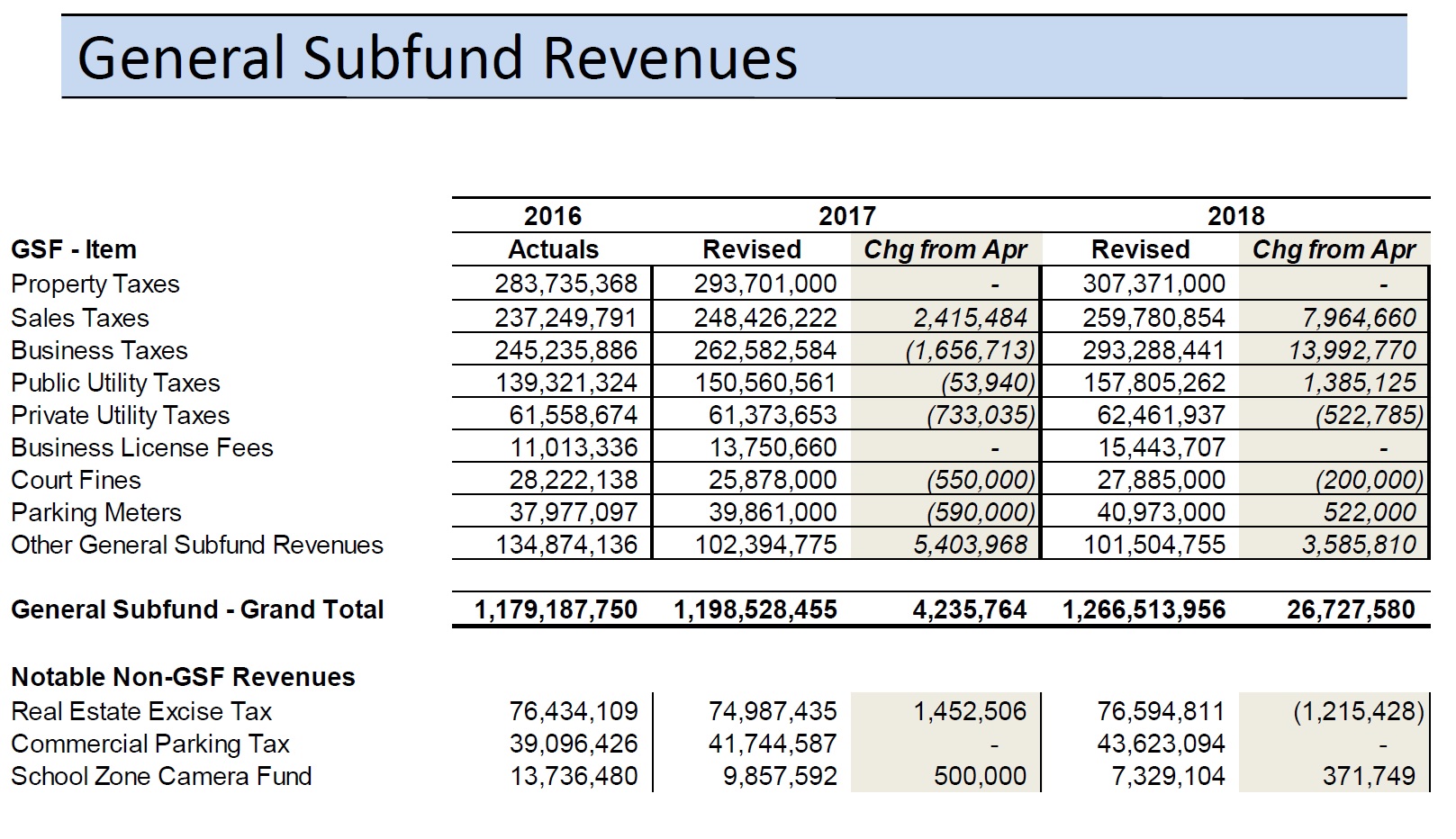 This means that the Mayor and the City Council don’t have much in the way of uncommitted revenues to spend, and in the words of Budget Director Ben Noble, the Mayor’s budget merely makes some changes “on the margins” from last year’s endorsed 2018 budget. In order to make meaningful funding changes, they would need to either find a new source of revenues, or reduce funding for some existing program. Both are unlikely to happen.

Here are some notes on what the Mayor’s budget actually does:

Last week, new Budget chair Lisa Herbold published a memo to her colleagues laying out principles for making changes to the Mayor’s budget, an update to the emo that former budget chair Burgess had sent out earlier.  Herbold also send out an updated calendar for the Council’s budget process. It makes reference to the meetings this coming week related to choosing an new Council member. It also pushes out the second public hearing to allow members of the public to react to the first “balancing package” after it is published.

As a reminder: the first public hearing on the 2018 budget is this Thursday evening.  You can find the complete proposed budget here.