The City of Seattle has been studying what to do about buildings with unreinforced masonry (URM) for over twenty years. Soon it might actually do something about it, despite the hefty price tag.

Let’s start with the basics: what is unreinforced masonry, and why is it a problem?

Prior to 1945, many brick buildings were designed so that floors and roofs extended into the load-bearing walls, but weren’t actually bolted to them; they just rested on them. 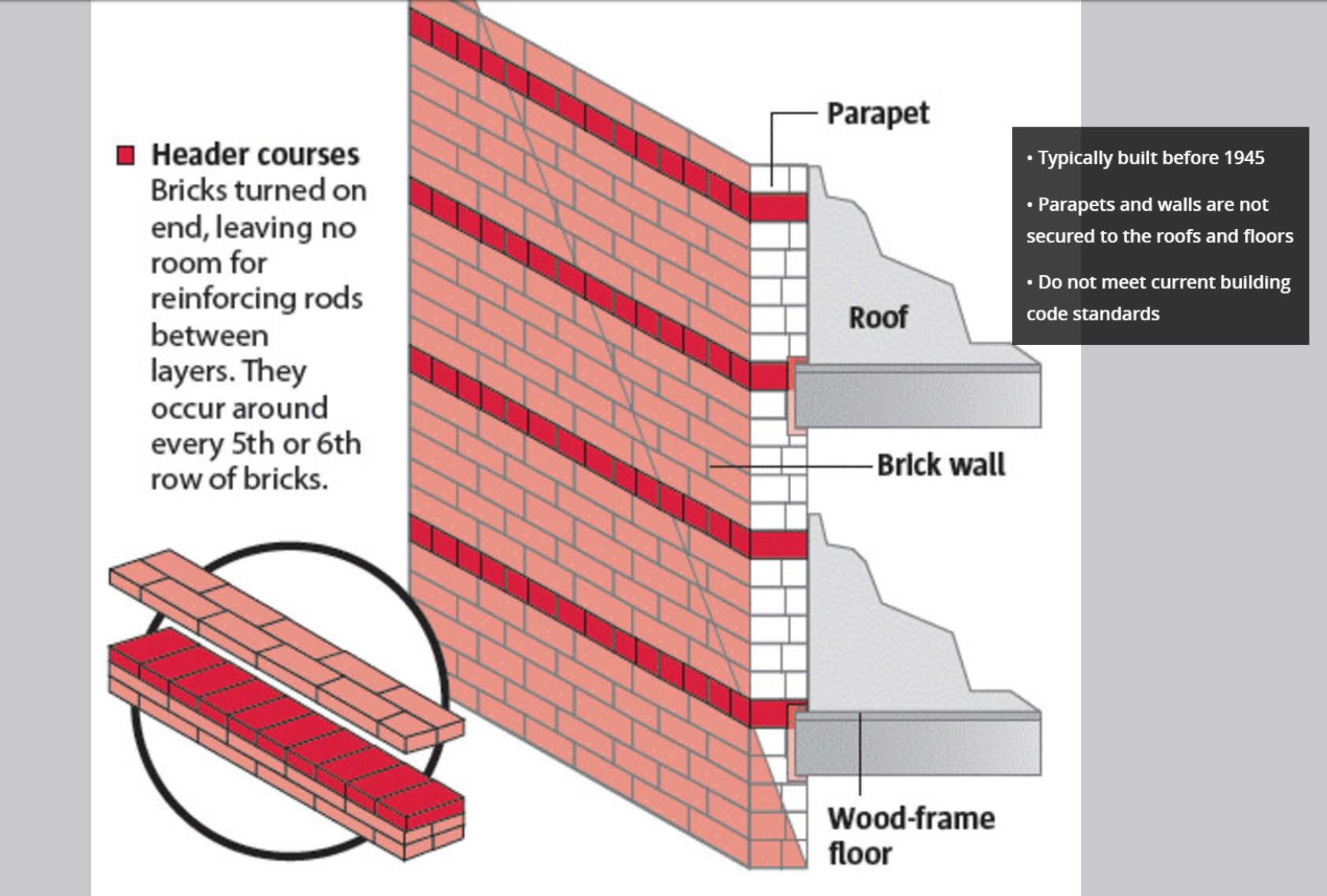 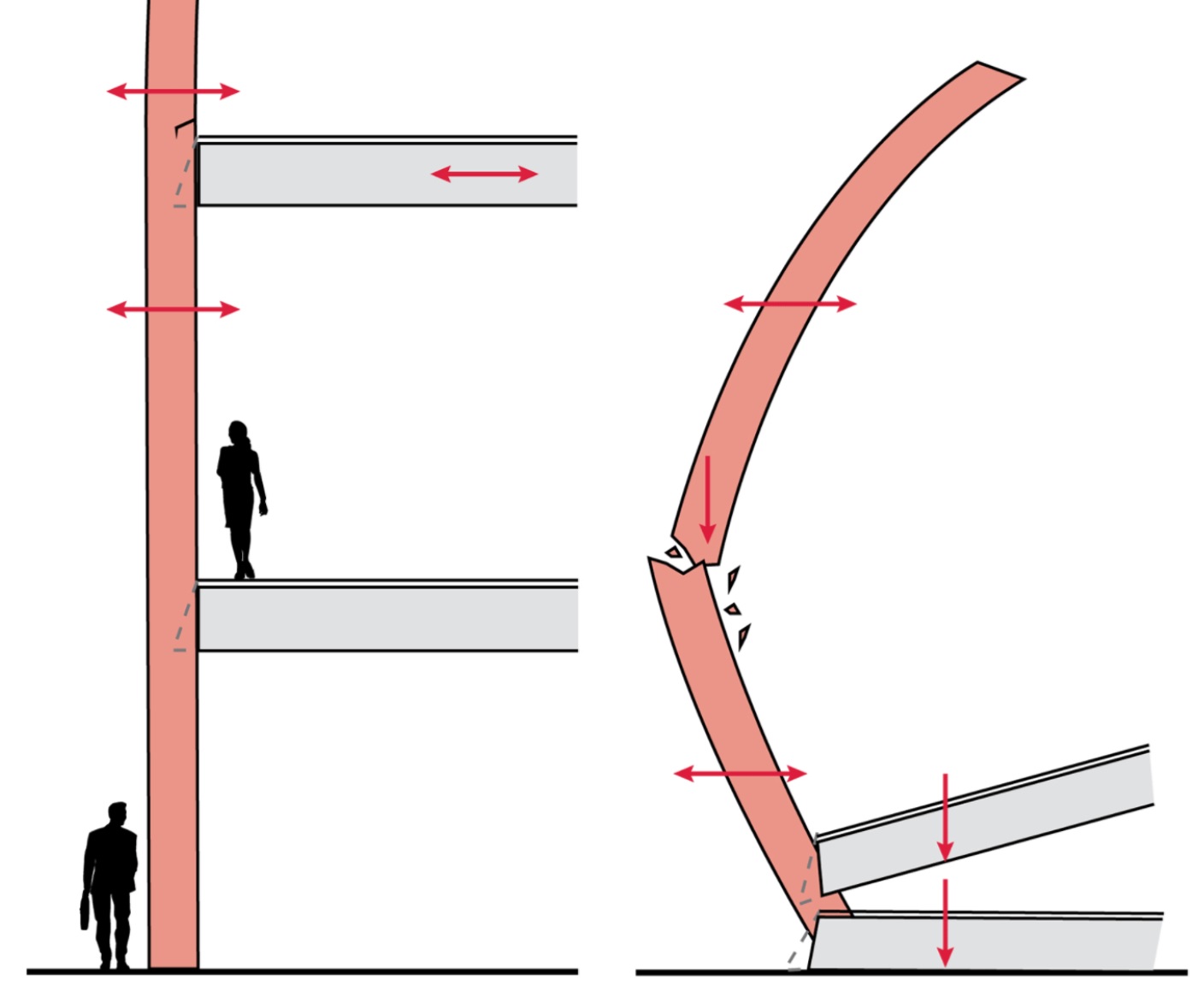 The 2011 earthquake in Christchurch, New Zealand is a textbook example of what happens to unreinforced masonry buildings in an earthquake. 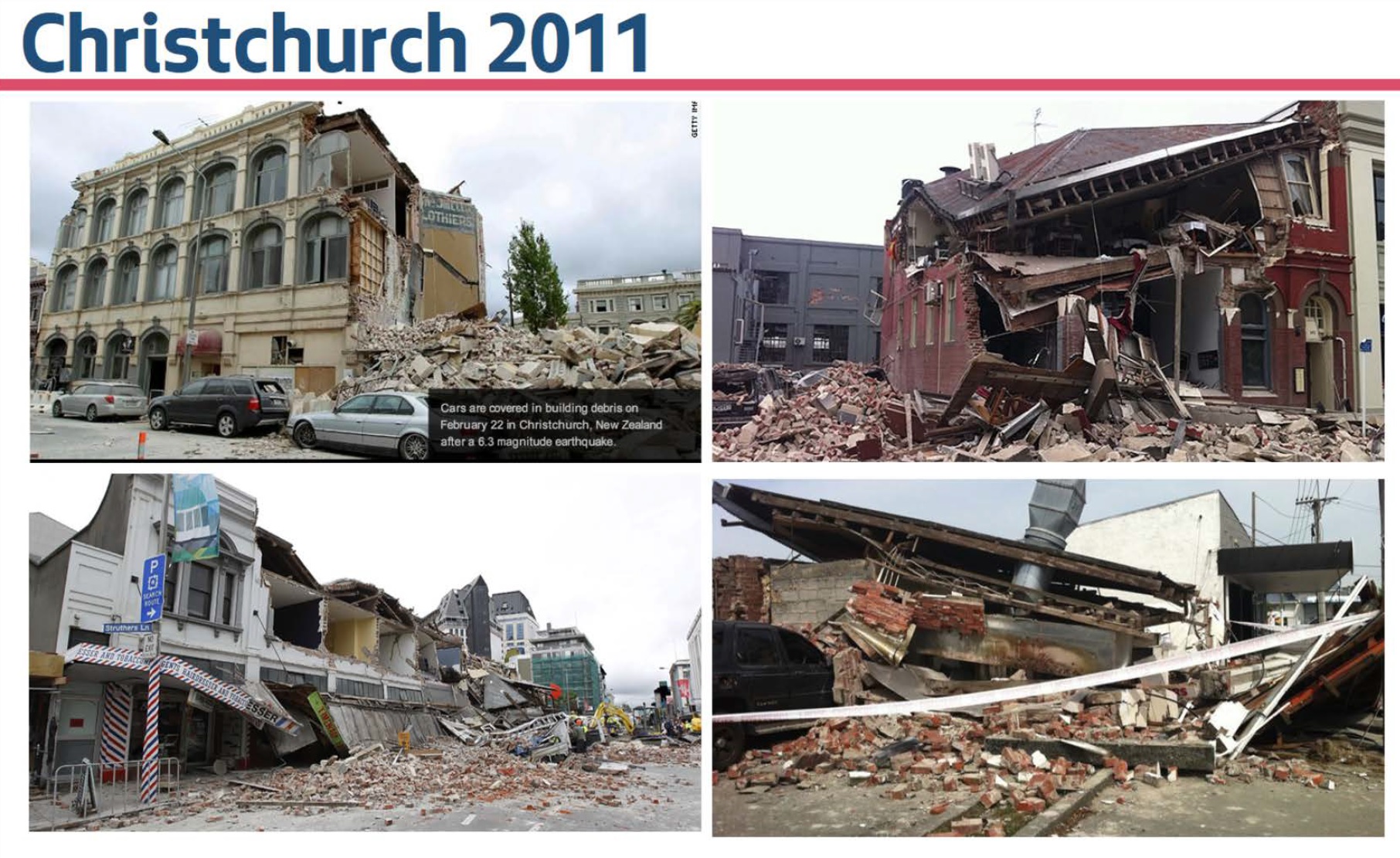 And here’s a video of what it looks like when a URM building collapses. During Seattle’s 2001 Nisqually earthquake, several URM buildings were damaged and rained debris down on the streets. Here’s a look at the damage done to the historic Cadillac Hotel, and the extensive work it took to restore it.

According to the city, Seattle has about 1,150 buildings with URM bearing walls, excluding single-family homes and duplexes. They are spread throughout the city, with large concentrations downtown, on Capitol Hill, and in the Chinatown-International District. They make up 26 million square feet of floor area, and 33,000 people are in these buildings on a daily basis as either tenants doing business or as residents. 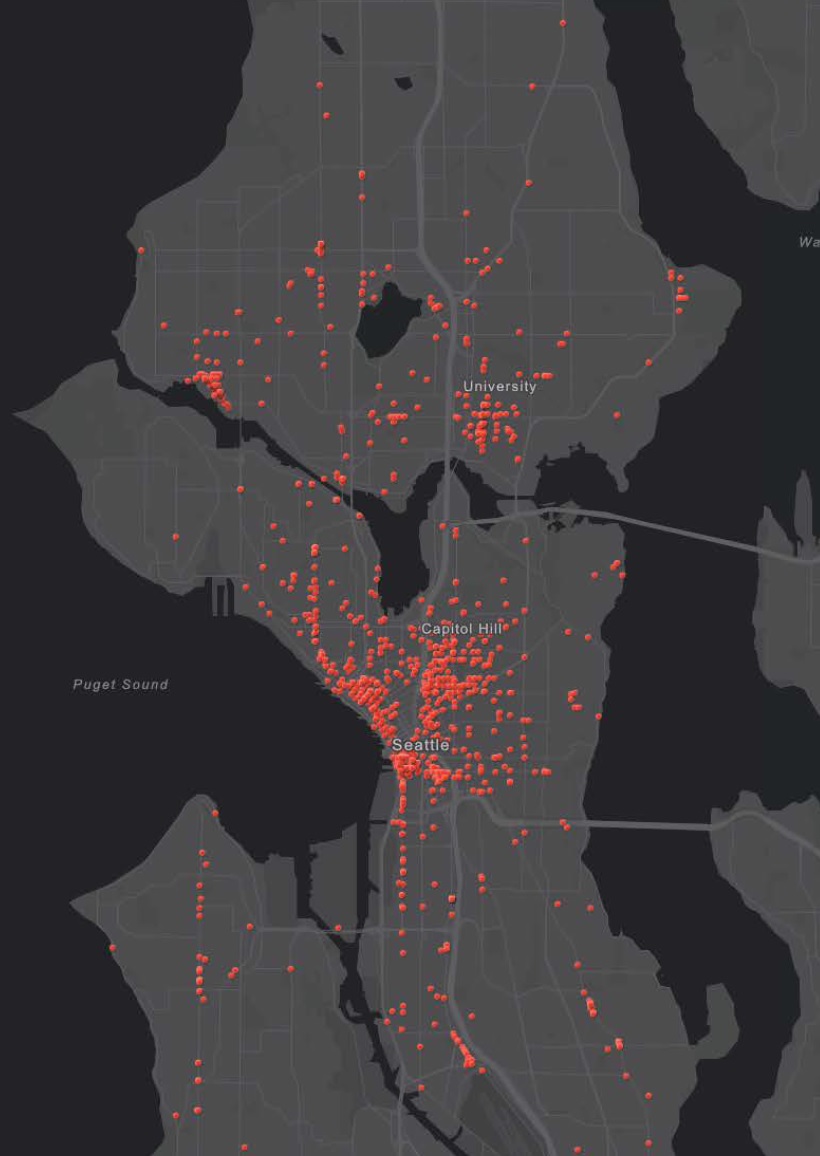 The city started trying to legislate this problem away in the 1970’s, but the current effort began in 2008. 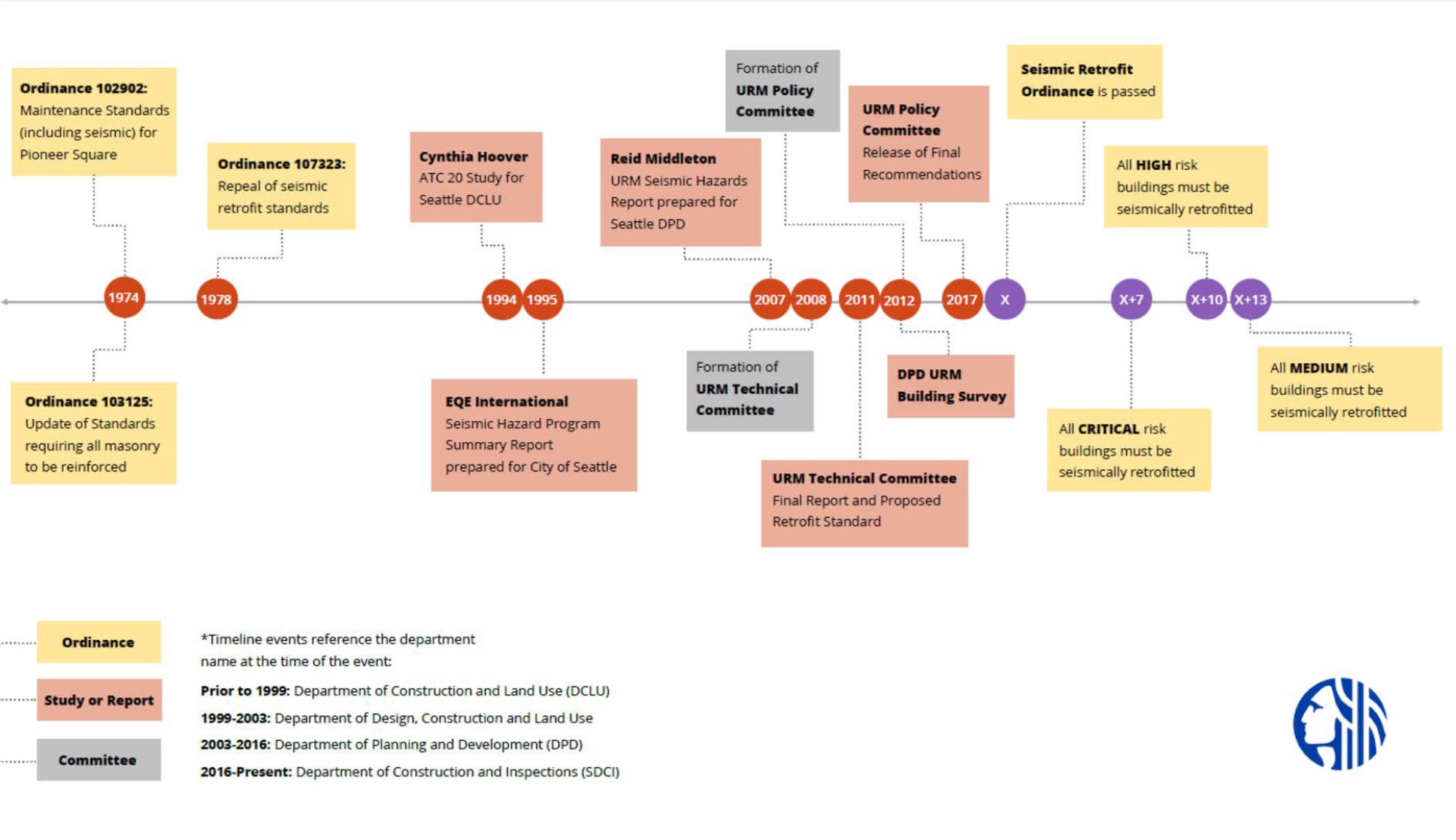 Here’s how the most recent report from the city described earlier failed efforts to tackle the problem:

Unreinforced masonry buildings are not a new issue for Seattle. In the 1970s, the Seattle City Council passed several ordinances requiring all URM buildings to achieve a given structural standard. The ordinances were eventually repealed when talks between the City and building owners met an impasse due to the cost of implementing the upgrades. SDCI resumed efforts at creating a citywide policy by forming URM policy and technical committees in 2008. The technical committee ultimately recommended adopting a modification of the Bolts Plus retrofit standard commonly used in California. The technical committee recommended the modification (described below) to better address life safety concerns. Policy Committee discussions ultimately were unable to move forward to generate a recommendation primarily due to the cost of retrofits. At the time, the estimate for a retrofit ranged from $5-40 per square foot.

The effort restarted in 2011 with the creation of a new Policy Committee to recommend a new retrofit policy. Recognizing that cost would once again be the key issue, in 2014 it asked the city to do a census of buildings with URM. It also set up a finance sub-committee to investigate various options to help building owners fund retrofit work.

Out of all those efforts came:

The most recent version of the policy recommends grouping URM buildings into three categories:

The policy suggests that retrofitting all of the buildings should be mandatory, but critical ones should be done within 7 years, high risk within 10 years, and medium risk within 13 years. Understanding that retrofit work needs to go through several phases (assessment, permit application, permit approval, and construction), the differences allot more time for less severe buildings to get through those phases — and also buys them more time to raise the necessary funds to pay for the work.

The city estimates it will take anywhere from $5 to $60 per square foot to retrofit a building, depending on what work is needed. This is based on the “bolts plus” approach adopted in California several years ago, which requires:

Some buildings might need additional bracing and strengthening if the walls are too thin, to bring them up to the strength necessary to support the bolts. 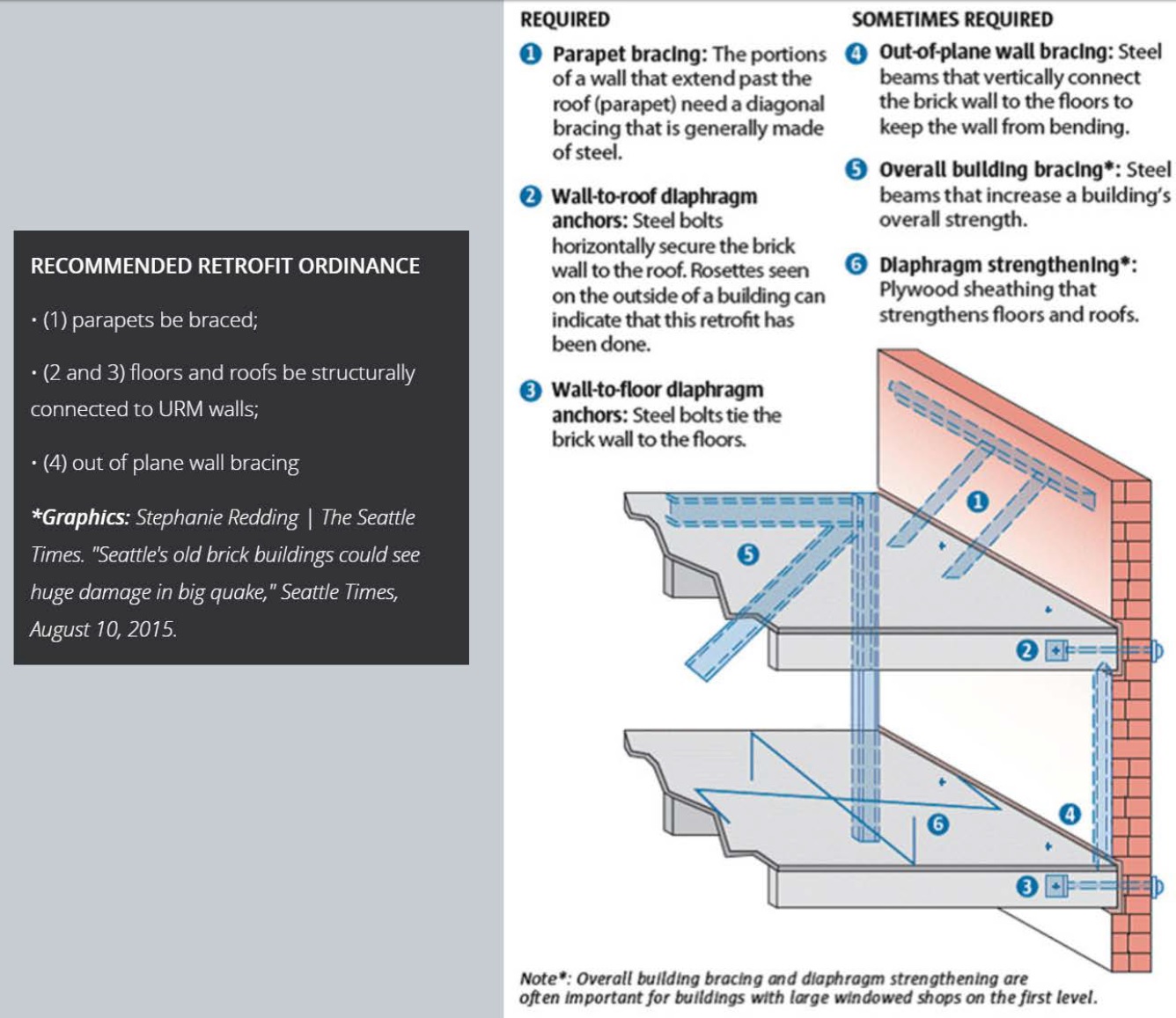 The city estimates that to retrofit all 1,150 buildings would cost as much as $1 billion. That number is a bit squishy, because the city’s records don’t include complete and detailed information on which buildings have already received some level of retrofit over the years. On the other hand, it’s important also to recognize that adopting the “bolts plus” standard is already a compromise that recognizes the high cost of retrofitting the buildings; it is intended to be a “life safety” measure to ensure that everyone can get out of the building and no one is hurt by falling debris if an earthquake happens. It won’t ensure that the building survives the earthquake intact.

Another problem is equity issues related to retrofitting URM buildings.  Older, URM buildings tend to be affordable commercial and residential buildings, so anything that happens to them will have a disparate impact on underserved and underrepresented groups in the city who are more reliant on those buildings. They will be impacted by short-term displacement if they need to move out while the retrofit is being done. Worse, a retrofit might get rolled into a larger renovation of the building, which could lead to economic evictions if the landlord decides to raise rents afterward.  But the flip side is that an earthquake that makes URM buildings uninhabitable — or injures or kills their inhabitants — has an even more devastating impact on those underserved communities.

All of this points to the need for work on funding mechanisms for getting the retrofits done and for mitigating retrofits’ impact. The subcommittee looking into this issue came up with several options that can be pursued for obtaining funding: 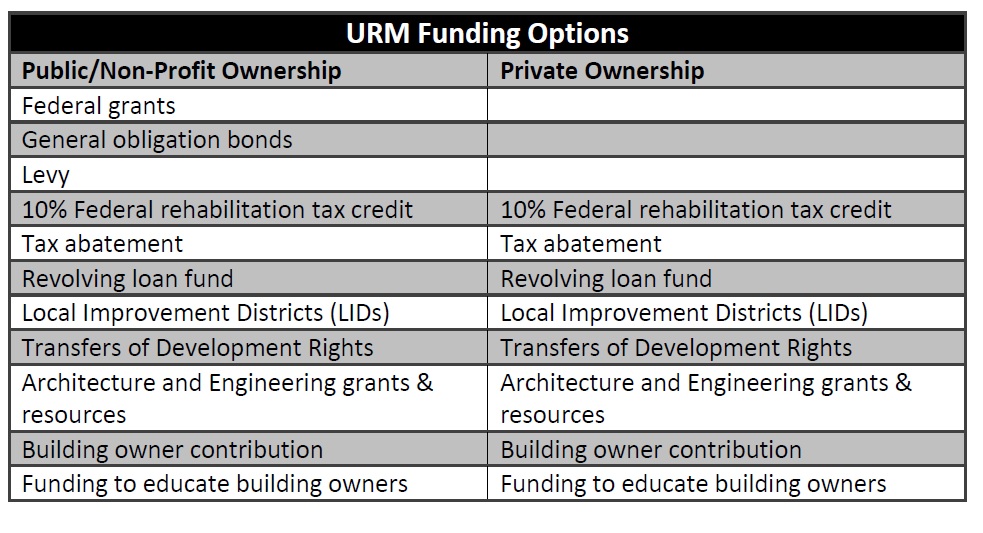 Some of these require changes in state laws, such as a tax abatement for retrofitting expenses. Others, such as issuing bonds or a Local Improvement District, require voter approval. Few are easy paths. All the more reason why the timeline needs to be so long for getting the retrofits done: it will take time and effort to raise funds, even through private-public partnerships. The policy committee noted that this could be particularly burdensome on small businesses and small property owners.

A piece of good news here is that the city has been proactive over the past few years in moving forward retrofitting efforts for critical buildings, most of which are publicly owned. Several are already in the permitting phase.

The city would prefer to use a carrot rather than a stick to encourage URM retrofits, but at the end of the day it will also need to decide whether to make retrofits mandatory, and what the penalty will be for missing the deadline. That will be a difficult policy question. In 1974 it passed an ordinance making seismic upgrade mandatory, only to repeal that ordinance four years later when the cost became prohibitive in the aftermath of the “Boeing bust.” Right now the local economy is strong and construction is booming, however it’s unclear what the future holds over the next thirteen years.

Having briefed the Council this morning, it’s now in the Council members’ hands to decide how to move these recommendations forward in 2018: whether to once again make retrofit of URM buildings mandatory and under what timeline, which financial assistance programs to pursue, and whether ancillary programs such as the Tenant Relocation Assistance Ordinance should be extended to provide additional aid for tenants displaced by retrofit work. Council member Bagshaw has been vocal about the need to address this issue for some time; it wouldn’t be surprising if she sponsored legislation to adopt the policy committee’s recommendations.

Here’s the city’s Department of Construction and Inspections web page with a wealth of information on unreinforced masonry buildings. You can watch this morning’s Council briefing on the topic here.