The biggest piece of bad news in the proposed budget package that Mayor Burgess delivered to the City Council was a big deficit in a line-item that almost no one has heard of: the Judgment and Claims Subfund. Subsequently, it became a point of debate between the two candidates for City Attorney, incumbent Pete Holmes and insurgent Scott Lindsay, with accusations that Holmes has been mismanaging his budget for outside counsel.

Let’s dig in to the Judgment and Claims Fund, look at what it is (and isn’t), and understand why it’s so far over budget this year.

Here’s the description of the Judgment and Claims Subfund, from the 2018 Budget document:

The Judgment/Claims Subfund provides for the payment of legal claims and suits brought against the City government. The subfund receives revenues from the General Fund and the utilities (Seattle City Light and Seattle Public Utilities) to pay the judgments, settlements, claims and other eligible expenses. Unused balances, if any, remain in the fund and may reduce the contribution required in succeeding years.
The General Fund-supported departments with 2% or more of historical Judgment/Claims costs make premium payments to the subfund directly from their budgets. Finance General covers premiums for departments with less than 2% of historical Judgment/Claims costs. Revenues from the utilities are budgeted based on expected expenses, but they only pay actual expenses as they are incurred.

If that leaves you scratching your head, you’re in good company. Let’s unpack it.

The fund was created in September 2001 by a City Council resolution, “in order to improve risk management controls and accountability within the Seattle City Government and to manage claims in a consistent and comprehensive manner.”

Under state law, people and institutions who think they have been wronged by the city government can file a claim with the Department of Finance and Administrative Services (FAS) for monetary compensation. FAS adjudicates that claim and may resolve it by offering a payment, transferring it to another agency, or denying it. If the claimant disagrees with FAS’s resolution, then FAS passes it off to the City Attorney’s Office (CAO) to handle any subsequent litigation.  The CAO may in turn settle it for a payment, or shepherd it through the court system which may result in a judgment against the city. If a judge rules against the city, then the CAO may end up making a payment for damages as well as reimbursing the claimant for their legal costs to litigate the matter through the courts.

The Judgment and Claims Subfund is a pot of money that carries a balance over across years, primarily used to pay for:

The fund also pays for two additional types of expenses:

Note that this is just about claims and litigation, not other legal work such as contract negotiations or drafting and reviewing ordinances on behalf of the Mayor and City Council. Also: the city’s two big utilities, Seattle City Light and Seattle Public Utilities, run as independent companies and reimburse the Judgment and Claims Fund for any expenses paid on their behalf so while the CAO works on their behalf their net effect on the J&C Subfund is zero.

The problem with trying to budget for this fund is that at the time the Council writes the budget it has little idea how many claims will be filed against the city, what judgments will be made against the city by the courts, and what kinds of settlements it will need to negotiate in the coming year. This is addressed in the resolution that set up the fund by directing that the city should deposit into the Judgment and Claims Subfund budget each year an amount equal to the average actual expenditures from the fund for the previous five years. On top of that, state law requires that the fund maintain a certain minimum balance as a trust fund to guarantee payment on public improvement contracts the city signs; that amount is currently $6.5 million, so if the current balance falls below that amount the city must increase its contribution.

The good news is that in some years the Judgment and Claims Subfund is under budget, and the remaining balance is carried over to the following year up to 50% of the expected annual expenditure. The bad news is that since the budget is an average over five years, statistically half the time the fund will be over budget. Here’s how it’s looked for the past several years: 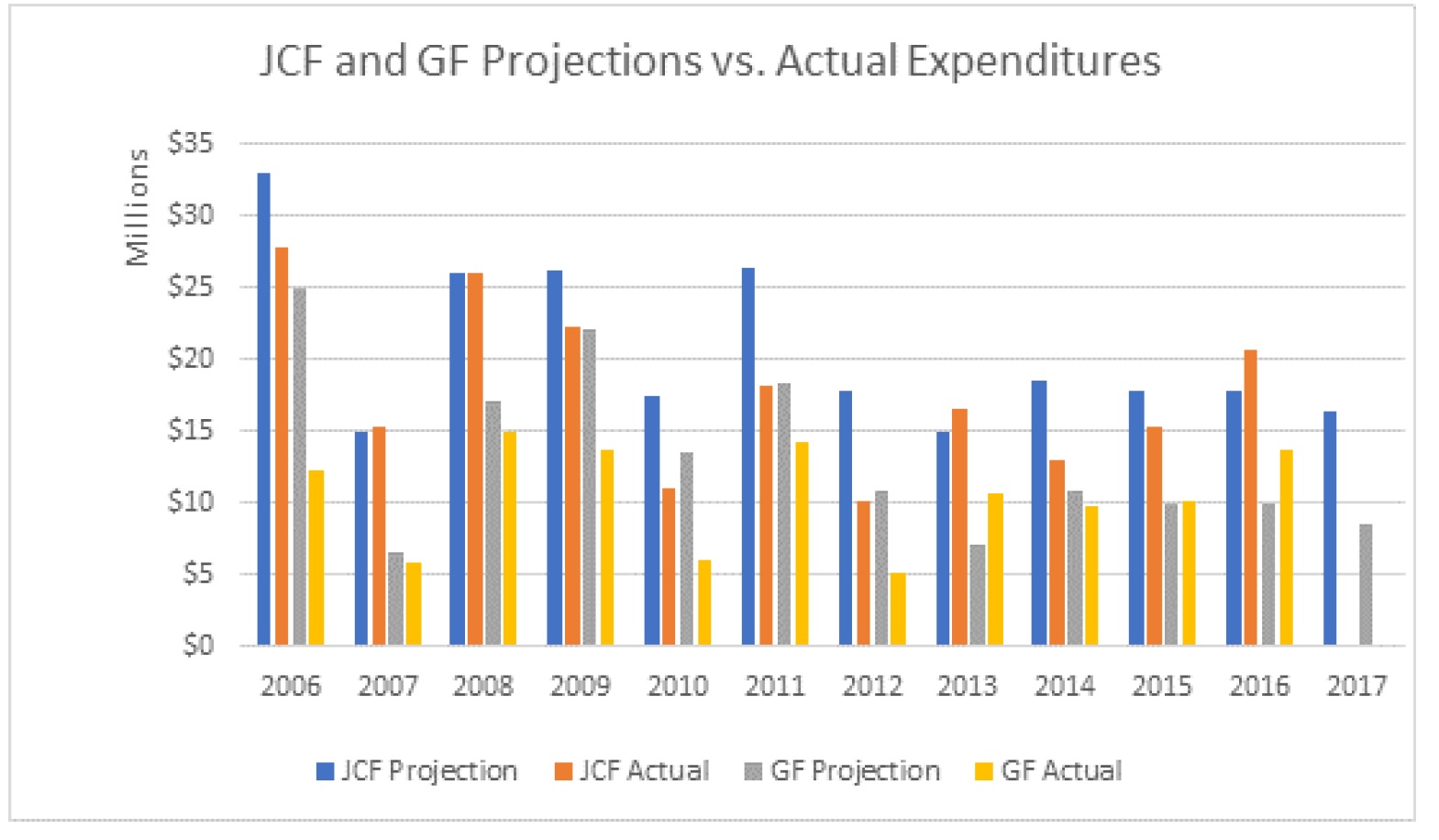 “JCF” is the entire Judgment and Claims Subfund, including Seattle City Light and Seattle Public Utilities, while “GF” is all the rest of the  city departments excluding those two (the ones whose budget comes out of the General Fund). You can see that the actual expenses vary considerably — especially if you include the utilities.

This year the city contributed $16.3 million into the J&C Subfund, with about $3.8 million to cover FAS claims and $12.5 million for the City Attorney’s Office settlements, judgments, and litigation expenses.  As of the end of September, FAS has settled 723 claims for a total of $2,336,930; they are roughly on track to stay within their budget.

Unfortunately, the City Attorney’s Office has already spent $13 million this year, with a whole quarter left to go. That’s about $4 million over where they were expected to be at this time. But before we start assigning blame, let’s look at how the money was spent, and how much of it is actually under the control of the CAO.

According to the CAO’s records, the year-to-date numbers roughly break down as follows:

Let’s look at the big-ticket item first: the settlements and judgments. The $9.2 million represents payouts on 45 separate cases in 2017. Seven of them collectively were worth $7 million.  The CAO provided me a list of those seven cases: five involved the Department of Transportation, and two involved the Police Department. There were five settlements and two judgments. The largest payout was $3.5 million for a settled case. The other 38 smaller cases had an average payout of around $53,000.  Assuming the City Attorney’s Office is doing a decent job of negotiating appropriate settlement amounts, this all seems pretty routine for a city of 700,000 people. If anything, one might raise an eyebrow at the number of big payouts tied to SDOT negligence, but that’s an issue to take up with Scott Kubly, not Pete Holmes.

Now let’s turn to the issue that Scott Lindsay raised: whether the city is overusing and overpaying outside counsel. One would expect the City Attorney’s Office to turn to outside counsel when they need expertise in an area of law beyond what their own staff has (either specific domains or niche activities like arguing a case in front of the Supreme Court), or when their current workload makes it impossible for them to keep up with case schedules for filings and hearings. The CAO provided me a list of the eight cases that racked up the highest outside counsel bills to-date, collectively totaling $1.5 million — over half of the total outside counsel expenses.

Over $500k went to one case: the ACLU’s lawsuit over homeless encampment sweeps. It’s been a very busy case with lots of motions and briefs filed. Three other cases relate to the city’s ordinance authorizing Uber and Lyft drivers to unionize. Certainly several of them represent specialty areas of law where the CAO might not have in-house expertise.

In the meantime, according to CAO spokespersons the office has handled entirely in-house several of the other high-profile cases, including:

It’s difficult to argue that the CAO is overusing and/or overpaying outside counsel as a general rule. If we looked through all the contracts we might find some cases, but at an average rate of $400 an hour (depressingly typical for law firm rates) $2.7 million represents 6,700 hours — just over three people fulltime for a year. Given the department’s needs for specialist lawyers in several arcane areas of law, that certainly seems within the bounds that one might expect. As a point of comparison, the City Attorney’s Office 2017 budget is $27.3 million, with approval for 183 internal employees (attorneys, paralegals, and administrative staff). That mostly goes to personnel expenses, but also includes funding for legal expenses and outside counsel to support all of their non-litigation work on behalf of the city. Yes, outside counsel are, as a rule, ridiculously expensive. You could argue that it would be cheaper to hire more in-house attorneys, but that might not be wise for short-term fluctuations in needs, and more to the point the attorneys with the needed expertise make far more money in private law firms so the city would have great difficulty in hiring them.

The bigger issue — also not directly under their control — is simply the sheer number of court cases the CAO is managing right now. In addition to the $4 million overrun so far, the CAO has asked for an additional $8 million supplement for the rest of the year (covering judgments and settlements, outside counsel, and litigation expenses), putting it a total of $12 million over budget. They are asking for the supplement in large part because their court calendar is full:

If you look back at the chart of historical J&C Subfund spending, you’ll notice that there were several years in which the General Fund portion was in the $13-15 million range. This year is certainly a high-water mark, due mostly to the settlements and judgments. If the city continues its current spending rate, it will end up paying about $4 million this year on outside counsel (plus another $1.2 million for outside counsel supporting the two utilities’ litigation); that’s a rounding error in the city’s $1.2 billion operating budget.

The bigger concern is the 2018 budget. Last year’s 2017-2018 biennial budget endorsed a J&C Subfund contribution of $15.2 million — over a million less than the 2017 figure. That figure was, of course, calculated using the official 5-year average formula. But the actual expenses have been trending up since 2012 with a big spike this year so it makes little sense to budget an unrealistic, lowball figure. In a weak nod to this trend, the Mayor’s budget adds an additional $1.2 million to the 2018 J&C budget, bringing it up to par with the original, wholly insufficient 2017 budget. That hardly seems enough, unless the payments for judgments and settlements were to drop off substantially next year.

So what should we take away?