Monday afternoon Budget chair Lisa Herbold released her “revised balancing package” proposal for the 2018 city budget. Tuesday morning she begins to lead her fellow Council members in deliberations and votes on the items in the package.

The big contentious issue, the employee-hours tax (or “HOMES tax,” or “head tax”), is still in the package, and in fact will be the first item up for discussion and vote. It won’t be pretty.

There are four established votes in favor of the employee-hours tax: Herbold, O’Brien, Sawant and Harris-Talley. As of their most recent public comments, the other five members oppose it for assorted overlapping reasons. Given a lack of majority support, it was strange for Herbold to include it in both her initial and revised balancing packages, along with a proposal for a $12.95 million interfund loan so they could spend 2019 head tax revenues and $12.95 million of corresponding expenditures on the homeless crisis response and affordable housing. Nevertheless she did, which means that those opposing the tax have the unpopular task of voting to remove those items from the budget.

Last year, the Council approached voting on the budget line-items by gathering several budget items together into “consent” groups that can all be approved in a single vote. They do this to save time; the revised balancing package contains 161 separate items, most of which are not controversial. However, any Council member can request that any item be removed from a consent group so that it can be voted on separately if she or he objects to the specific bundling of the items together. Expect the Council to follow the same basic process this year.

The first section of Herbold’s revised balancing package is everything related to the employee-hours tax: the bill establishing the tax and its administration; a $12.95 million interfund loan; seventeen expenditure line-items totaling $12.95 million that are intended to be funded by the interfund loan;  and a Statement of Legislative Intent related to issuance of $50 million in bonds in 2019 to be paid back using revenues from the tax.

The grouping also includes two nearly-identical Statements of Legislative Intent (SLIs), one from Herbold and the other from Harrell, that would convene a “stakeholder process” similar to what was used for the $15 minimum wage, to develop recommendations for an employee-hours tax; if the Council chooses to vote down the tax (and all the corresponding expenditures), it could choose to approve either of these as an alternative — in anticipation of enacting the tax in the 2019 budget.

The agenda is clearly set up so that all of the employee-hours tax items can be considered as a single consent group. The Council members can pull out the two competing SLIs and then take a single up-or-down vote on the tax, loan and expenditures. If they vote “no,” they can then pick an SLI to adopt as an alternative.

This is high-stakes poker, and Herbold has gone all-in. It seems her bet is that with a list of seventeen highly desirable line-items in front of them, her colleagues will feel the pressure to vote “yes.” To add even more pressure, Sawant has rallied her supporters in the Housing for All Coalition to call and email Council members, and to show up at meetings and demand they approve the employee-hours tax; in fact, they showed up Monday afternoon as well, commented at great length during the public comment session (dressed in black, speaking on behalf of homeless individuals who have recently died in Seattle, and leaving red roses in their memory on the lectern), and regularly interrupting the Council meeting to shout at the Council members their demand to approve the employee-hours tax. 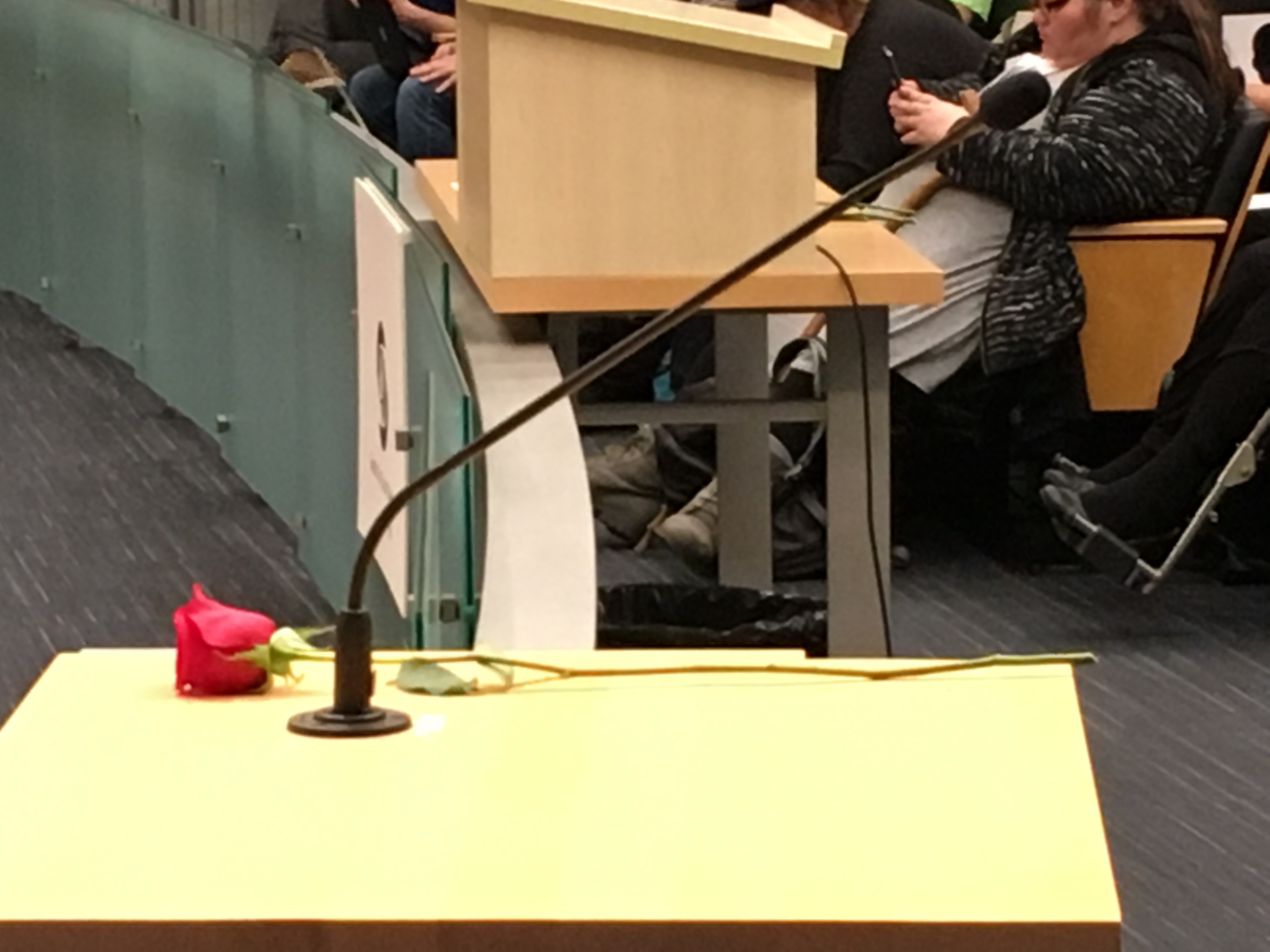 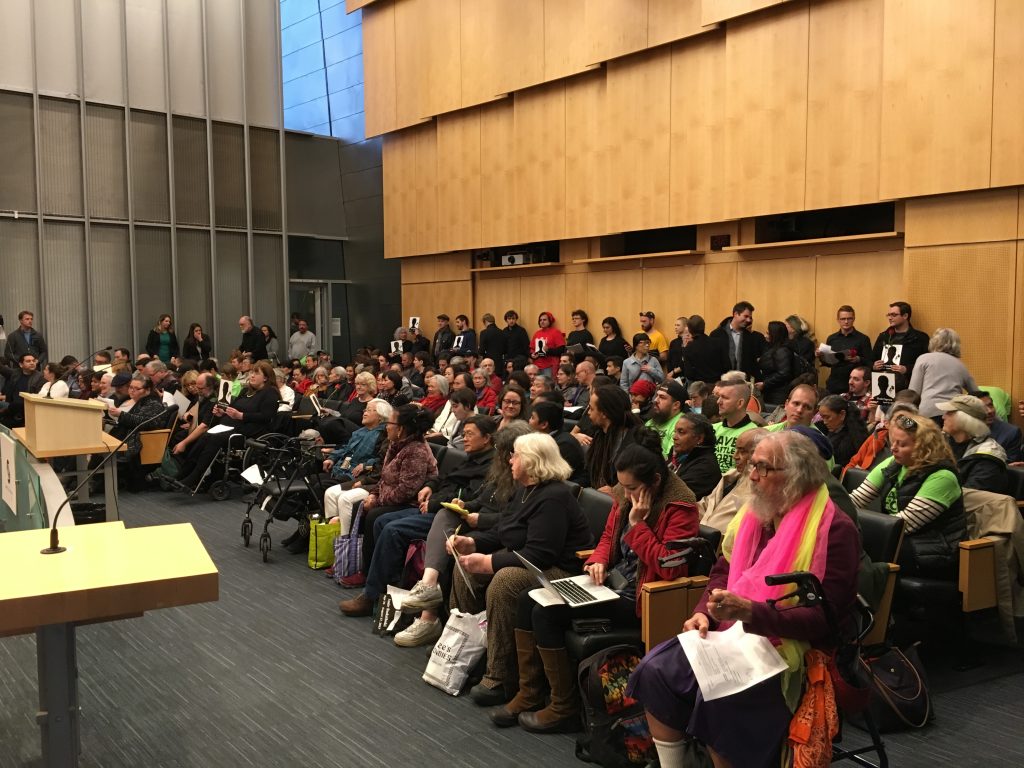 There is resentment and frustration among some of Herbold’s colleagues that she is using her position as Budget chair to force them to vote to remove both the tax and specific new appropriations to address the homeless crisis, rather than forcing the minority of Council members who support the tax to vote it in and then propose how to appropriate the revenues. Also, Juarez can’t be happy that one of her signature efforts, expanding the successful  LEAD program into her district, is now attached to the employee-hours tax (which she opposes). Expect a lengthy and heated debate at Tuesday morning’s budget committee meeting, after a lengthy and heated public comment session.

Several other items of note are also in the revised package, many of which were in the initial balancing package and were discussed at length last week. Those include:

Notably missing from the revised balancing package is last week’s proposal from Sawant, Harris-Talley and O’Brien to “stop the sweeps” by prohibiting homeless response funds from being spent to remove camps other than is specific areas (such as sidewalks, school grounds, and active park areas). Instead, Herbold’s own competing proposal was included that restricts encampment removal spending to only those procedures allowed under the MDAR rules.

Council members have one more shot at getting a proposal included in the budget by introducing (or re-introducing) it this week; that requires getting a majority of Council members to explicitly vote for it. Also, any proposal put forth this week must be “self balancing” by identifying a revenue source to offset any additional expenditures. It’s likely Sawant will do that with her “stop the sweeps” proposal; it won’t pass, but Sawant will force her colleagues to vote against it as a matter of record. Beyond that, given the difficulty the Council had in identifying alternative revenue sources to a employee-hours tax, it’s unlikely that many new proposals (or previously rejected ones) will be introduced, particularly any that cost money.

The Council has scheduled morning and afternoon sessions on both Tuesday and Wednesday in order to get through the budget items. The employee-hours tax will take a large chunk of time, as will the homeless encampment removal proposals. Also, there are a number of pieces of legislation that accompany budget requests (included at the end of the balancing package as “related legislation”) and may seem some amendments this week before passing out of committee. But pretty much everything else has been debated to death, so unless a Council member introduces something new and controversial, the rest of the budget approval process should proceed rapidly.