In order to dig themselves out of their budget hole (after failing to enact an employee-hours tax), the City Council raided the Mayor’s budget today. Their additional cuts today, on top of a couple that were already in their budget, lopped over $1 million from a budget originally proposed to by $6.4 million — about a 17% cut.

Several of the Council members, with the notable exception of Johnson, tried to justify it after-the-fact by claiming that they were resetting the Mayor’s Office budget back to a “baseline.” They also pointed out that former Mayor Murray was paying may of his staff high salaries (while his predecessor McGinn had a larger staff at lower salaries, Murray preferred fewer staff at higher salaries). Johnson, in turn, noted that the Council had made few cuts to its own much larger budget ($16 million).

Mayor Burgess, who leaves office in two weeks, issued an angry rebuke to his former Council colleagues on behalf of his successor, Jenny Durkan.  Council member Harris-Talley gave an equally angry response, pointing out that Burgess had tried to cut the Mayor’s budget when former Mayor Mike McGinn came into office. But let’s put that sideshow aside.

There are four interesting questions to ask about the Mayor’s budget:

First question: is the big cut unusual or unprecedented?  Here’s a graph of the year-to-year changes in the Mayor’s Office budget since 2000: 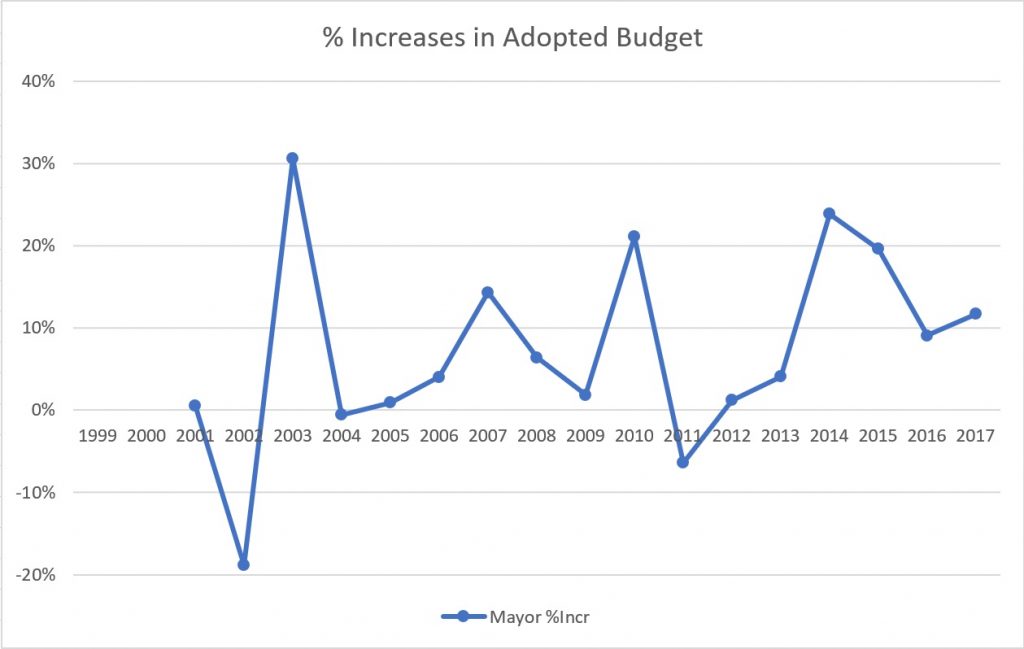 A big drop isn’t without precedent: it happened in 2002, a post-9/11 recession year.  But cuts of any size in the Mayor’s budget are extremely rare. If we compare it to the Legislative Branch and the overall city “general subfund” budget, we see this: 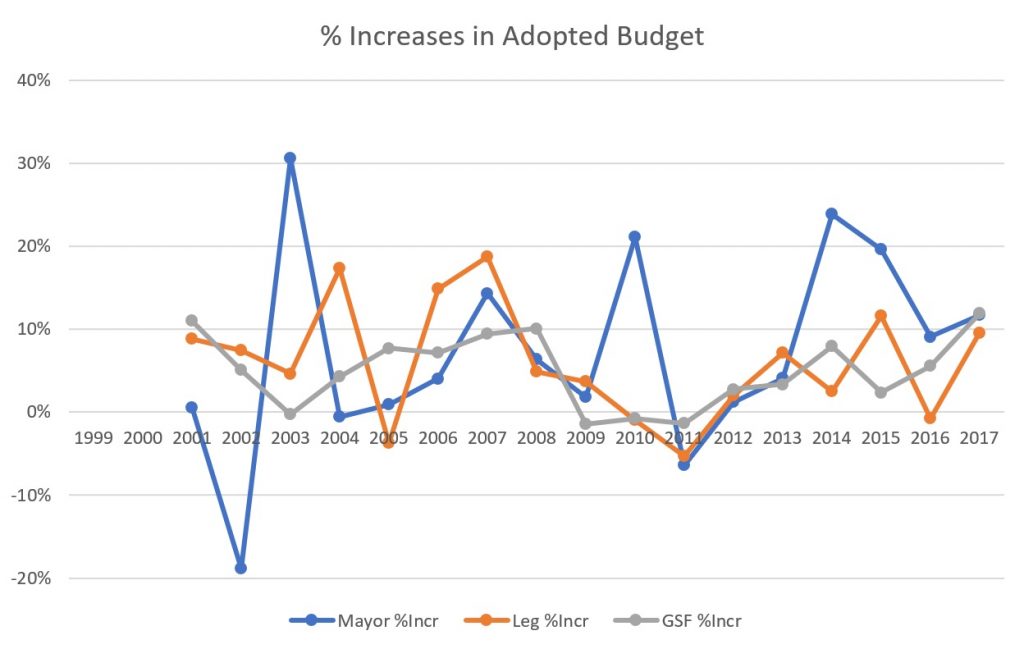 That’s pretty messy, but there are two take-aways:

If you squint at the chart, it also sort of looks like the legislative department’s budget tracks pretty closely to the total budget.  And if we compare them, we see that is, in fact, very much true: 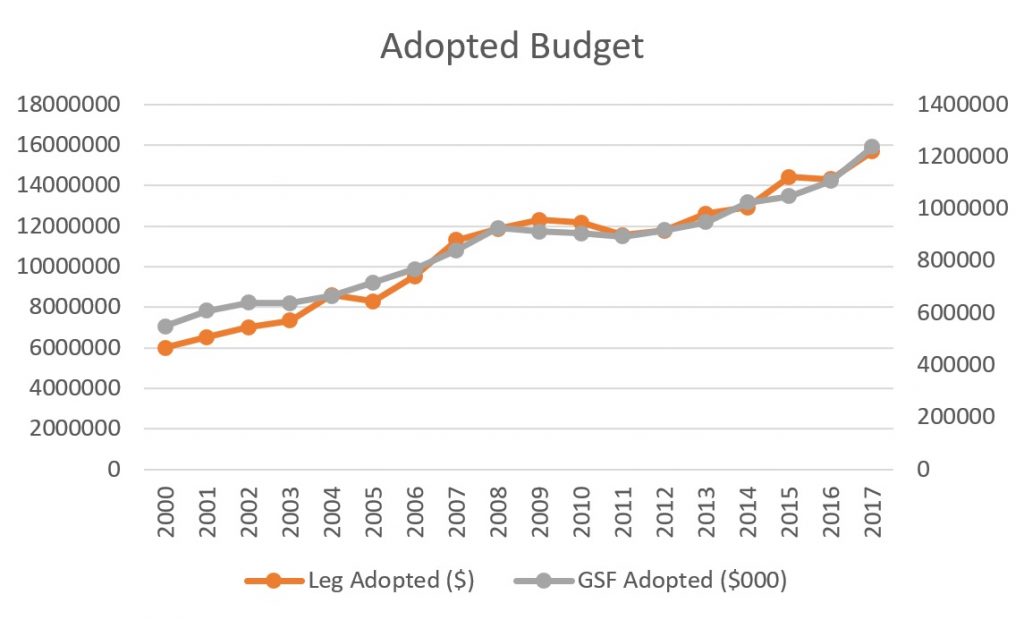 Given that budget cuts are rare, we would expect to see the Mayor’s Office budget going pretty steadily up over time too, and it does: 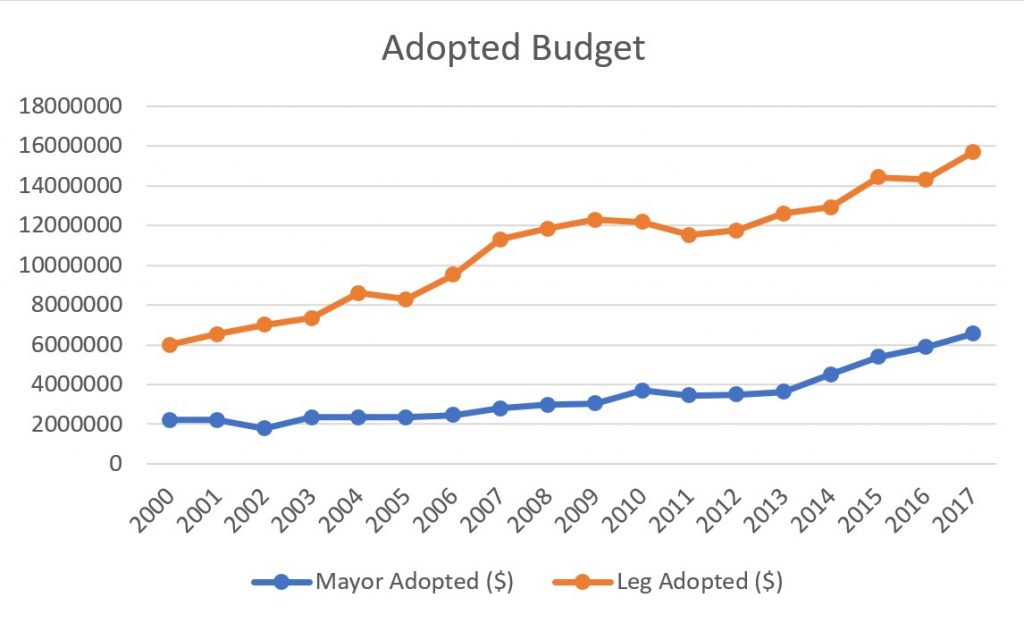 But here’s the big insight: 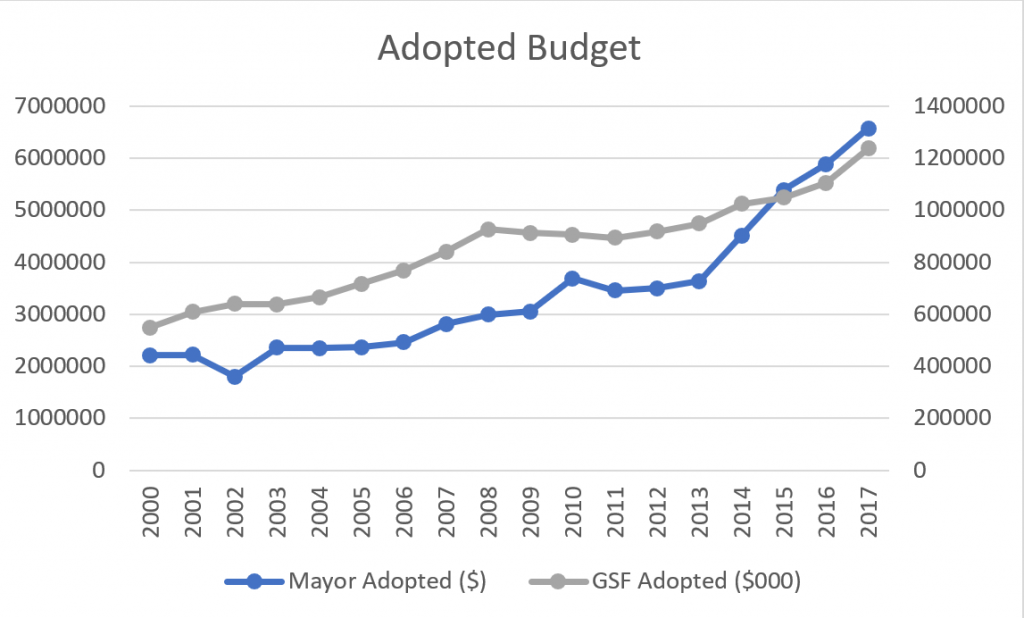 Since the beginning of the century, the Mayor’s Office budget has been lagging behind the growth of the city budget as a whole. It was flat under McGinn (who was dealing with the Great Recession), and only recently did Murray get it caught up to where it arguably should be. And now it’s poised to take another big drop, if the Council has its way.

That leaves one remaining question: historically, what happens to the Mayor’s Office budget in the first year of a newly-elected Mayor? Here are the stats:

There’s certainly no recent precedent for resetting the budget to a “baseline,” and in fact there’s no precedent for the first year of a Mayor’s term to be unique in terms of the budget. The dominant factor is the one that drives the budget as a whole: the economy.

To the extent that there is a budgetary, policy or political imperative to reset the Mayor’s Office budget to a baseline, the most logical one is the General Subfund — to which it finally caught up last year after lagging for 15 years. That would argue for cutting in the range of $200,000 to $400,000 from the proposed 2018 budget, not $1 million as the Council did today. Now, this gets a little tricky because the Mayor’s proposed budget transfers 6.5 positions and $372,000 from the Mayor’s Office over to another department, and we should interpret that as moving the baseline down, not a budget cut, since the city’s overall budget doesn’t change — stuff just got moved around. Other than that, the Mayor’s Office budget is flat. So when we add in the 2018 proposed budget to our graph, it looks like this: 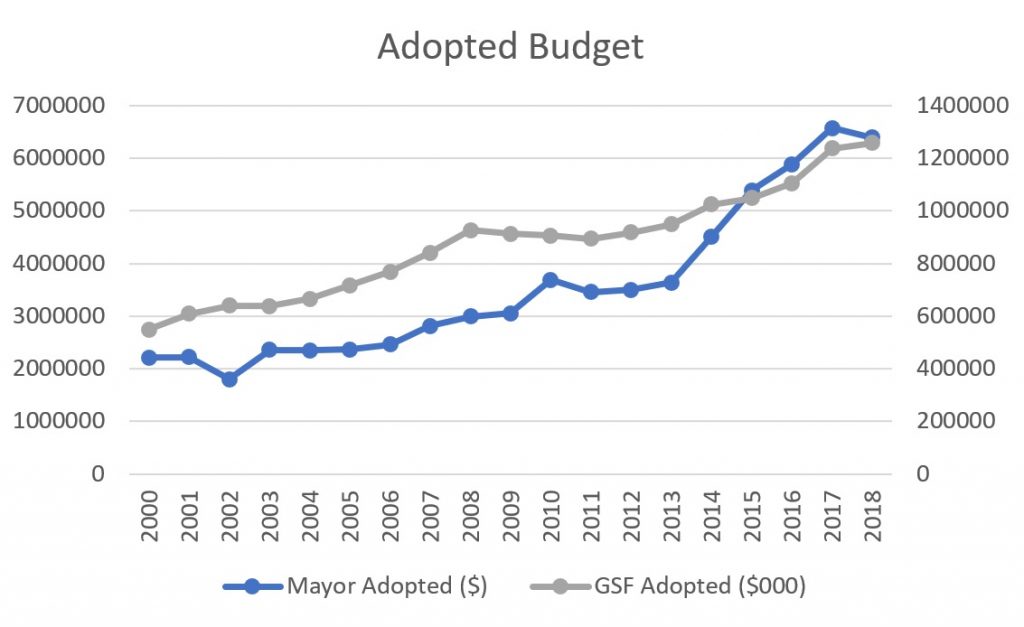 The important thing to notice is that the city-wide budget is modestly increasing (just under 2%). If it had dropped 17%, then it would make perfect sense to make a dramatic cut to the Mayor’s Office. But it didn’t, so if we want to track to our adjusted baseline you could still cut $200-300 thousand and be in the ballpark. Anything more than that and we’re lagging overall growth again.

And just for completeness’ sake, the proposed Legislative Department budget grows 2.3% in 2018, so it’s slightly outpacing the overall budget but well within expected year-to-year volatility. So there’s at least a bit of room to tighten the belt there too.

Of course, at the end of the day, this isn’t about math, it’s about policy and politics. The Council’s job is to control the purse strings. Money lets you get things done, and granting or withholding it is a political act of bestowing on a department or official the capacity needed (or lack thereof) to accomplish certain goals. By dramatically cutting the Mayor’s Office budget while maintaining its own, the Council is making a clear statement about what they expect to happen next year.