The City Council is considering a plan to expand the Seattle Asian Art Museum in Volunteer Park and extend the Seattle Art Museum’s lease on the property for an additional 55 years. The plan has many supporters, as well as a dedicated set of opponents.

In 2008, the citizens of Seattle passed the Parks and Green Spaces Levy, which earmarked $9 million for seismic and other upgrades to the building. But the plan was shelved when the recession hit.

In 2011, the city passed an ordinance committing $11 million to upgrades and restoration, and to planning for another expansion of the building. That set in motion a cooperative plan between the city and the Seattle Asian Art Museum (which is operated by the Seattle Art Museum), the result of which is the plan before the Council now — with a bigger price tag for the city. 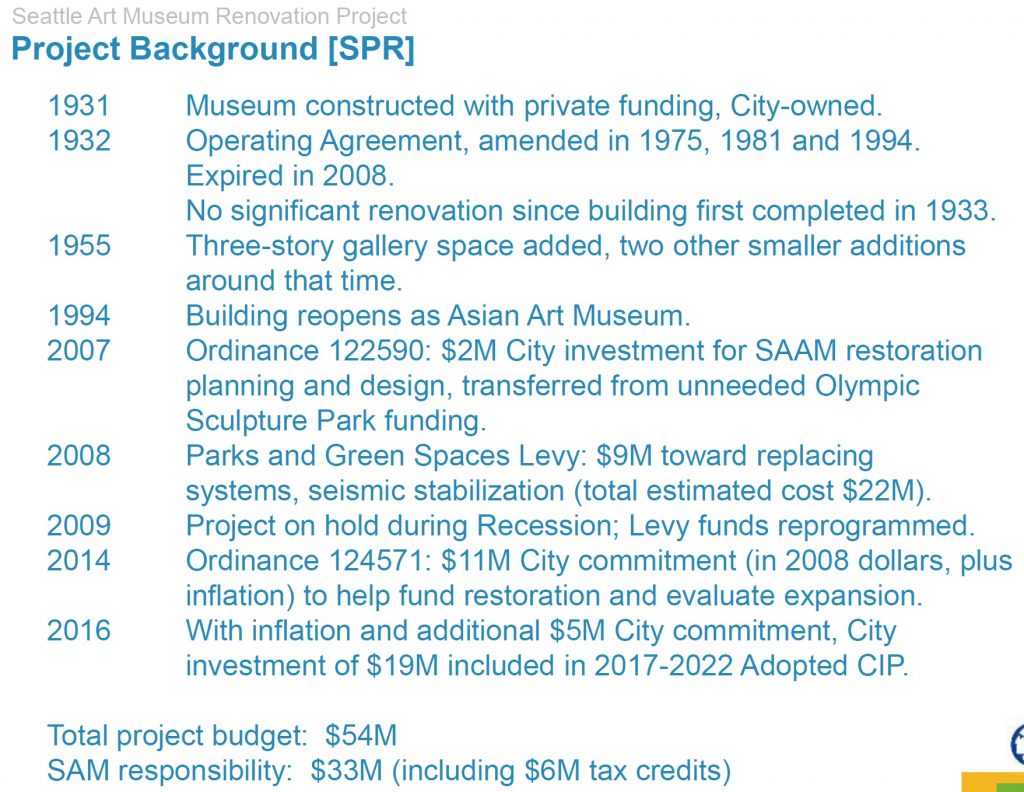 The building sits in the middle of Volunteer Park, an interesting arrangement. The park is in a residential zone where museums are not allowed, making the building a “nonconforming use.” To be fair, the building predates the zoning, but nevertheless expanding it requires an explicit exemption by the City Council. The city has prepared a land use amendment that will do exactly that: it carves out an exception solely for this building.

Since it’s a city-owned building, and city dollars will partially fund the project, the Council must also approve the redevelopment and expansion agreement. Attached to the project is also a 55-year lease extension for the museum.

Let’s dive into the details of the project.

Here’s an aerial map of Volunteer Park, with the existing building circled. 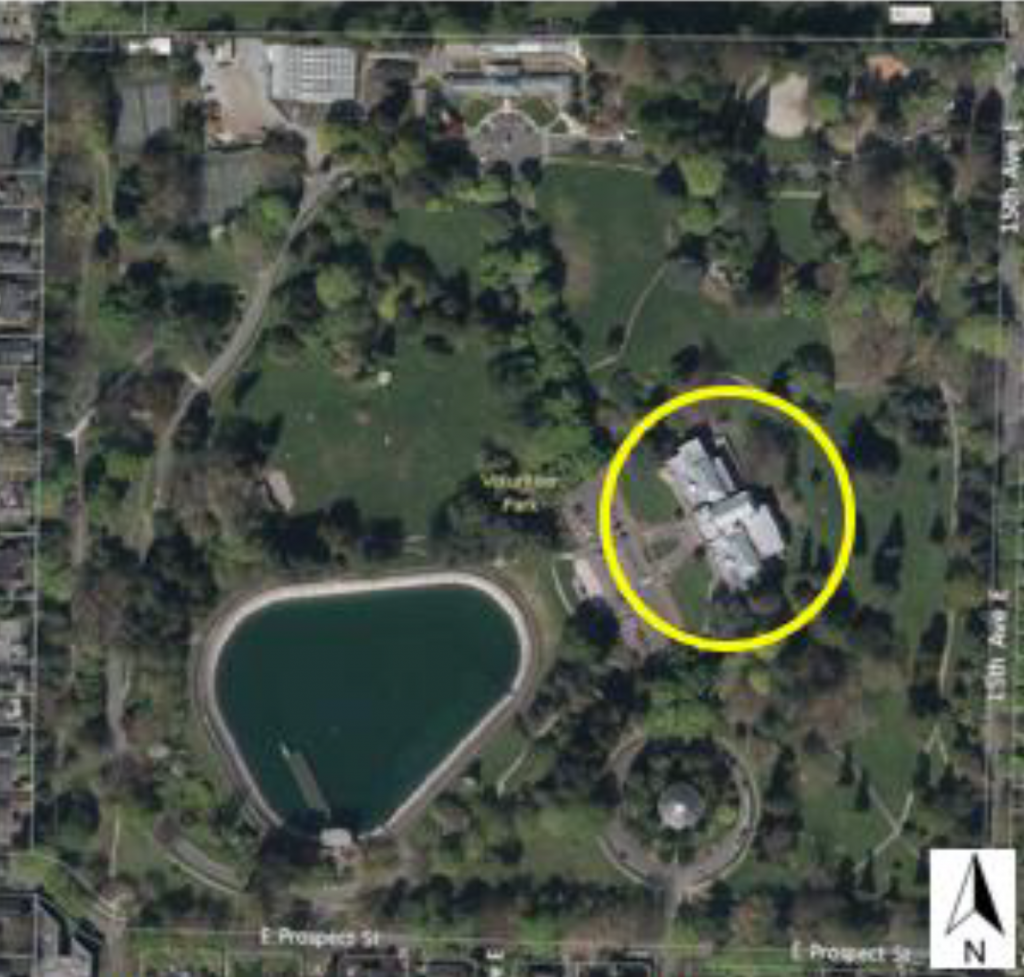 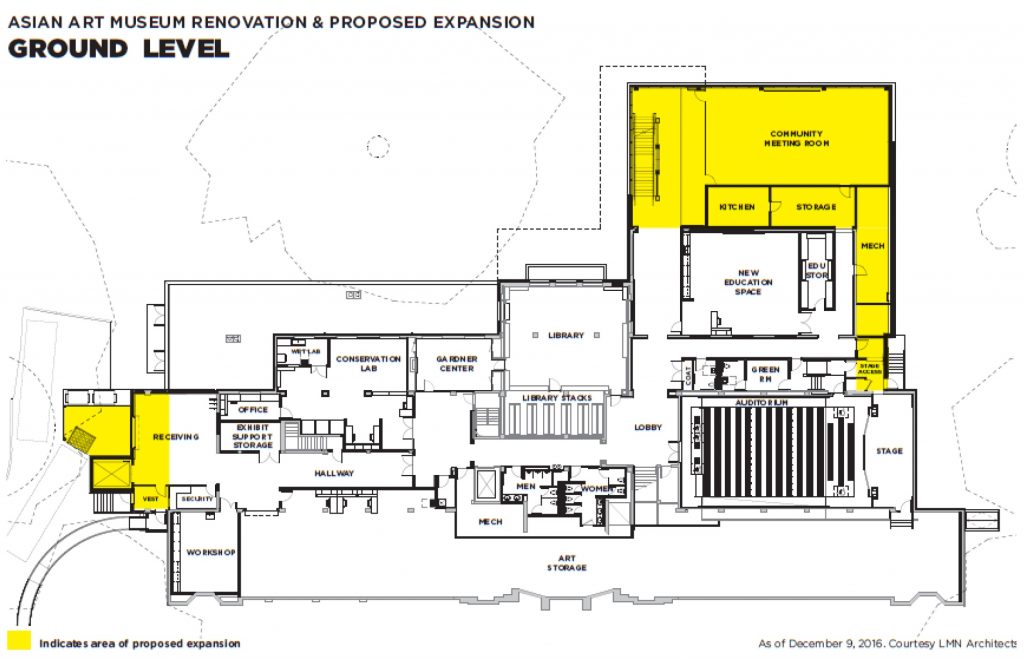 And here’s how it would look on the park map: 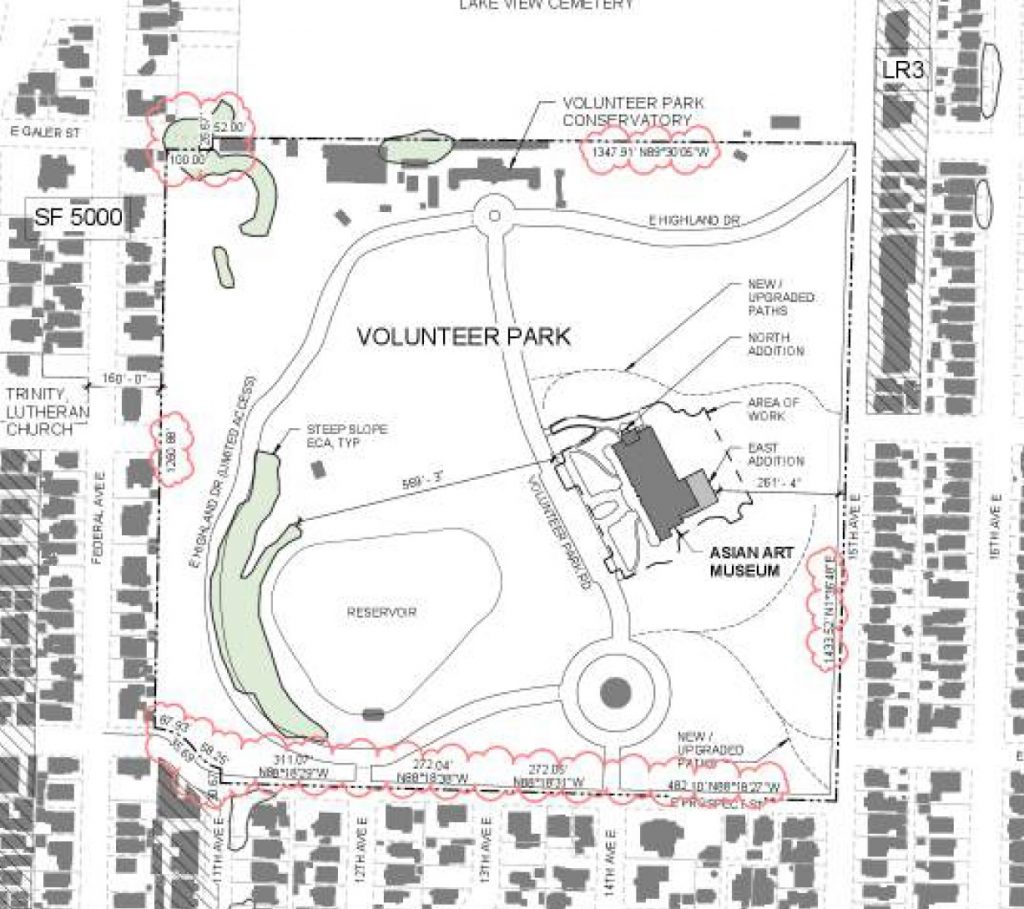 The expanded building’s footprint would be 23,700 square feet, an increase of 4900 square feet. The new building would take up 1.1% of the park’s land.

There are three floors through much of the building, including in most of the expansion, so the actual usable floor space increases more — from the existing 50,345 square feet to 64,250. The land use exemption that the Council is considering would limit the expansion to 15,000 additional square feet of floor space, so at 13,900 the plan is safely under the limit.

The building itself is classic art deco architecture, and a historic landmark. Here’s the front (west-facing): 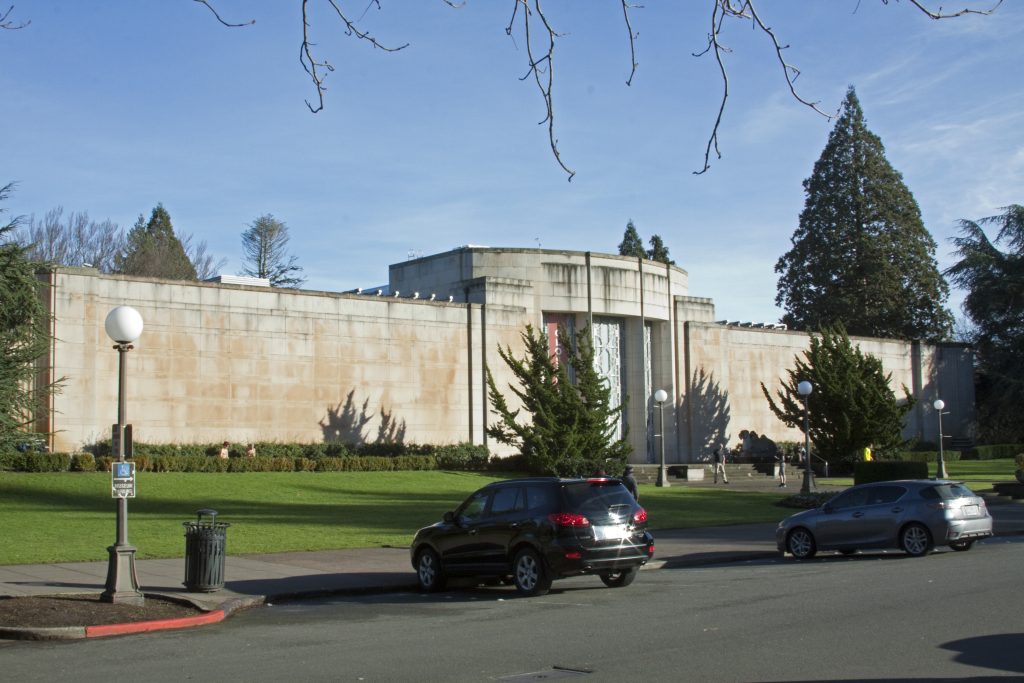 It has a beautiful sandstone façade, but is clearly in need of repair and restoration. In 1994, the city approved $400,000 for emergency structural repairs it discovered while studying the excessive wear and discoloration of the façade (which it determined could cost as much as $2 million to address).

The east-facing rear of the building originally looked like this:

During the first building expansion in 1954, the front was retained intact but several changes were made to the rear, including pushing the southern half out farther east. 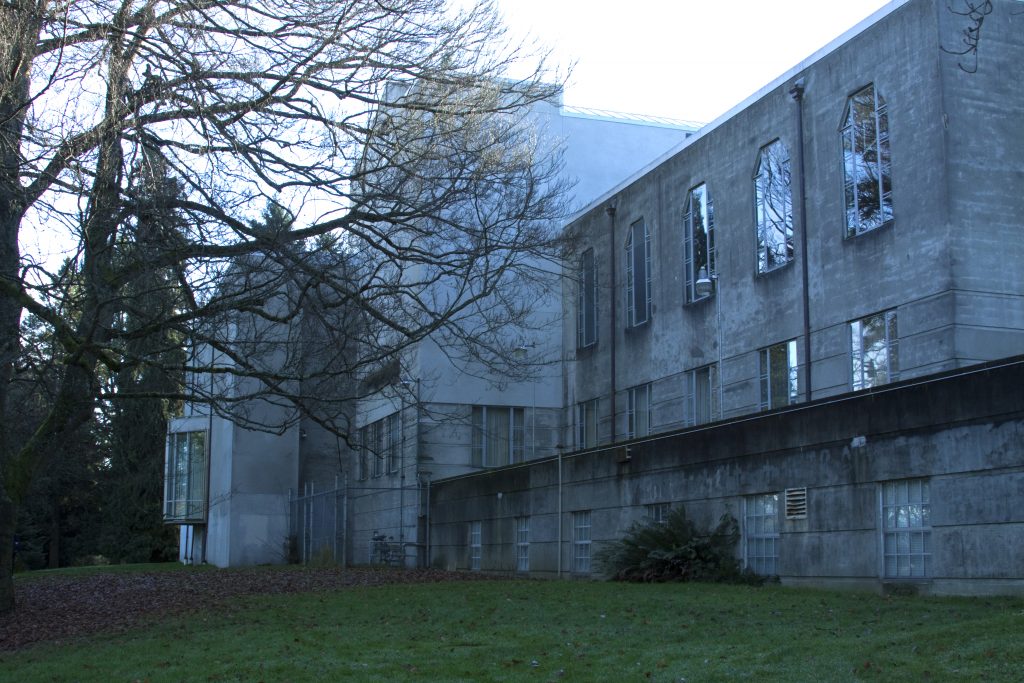 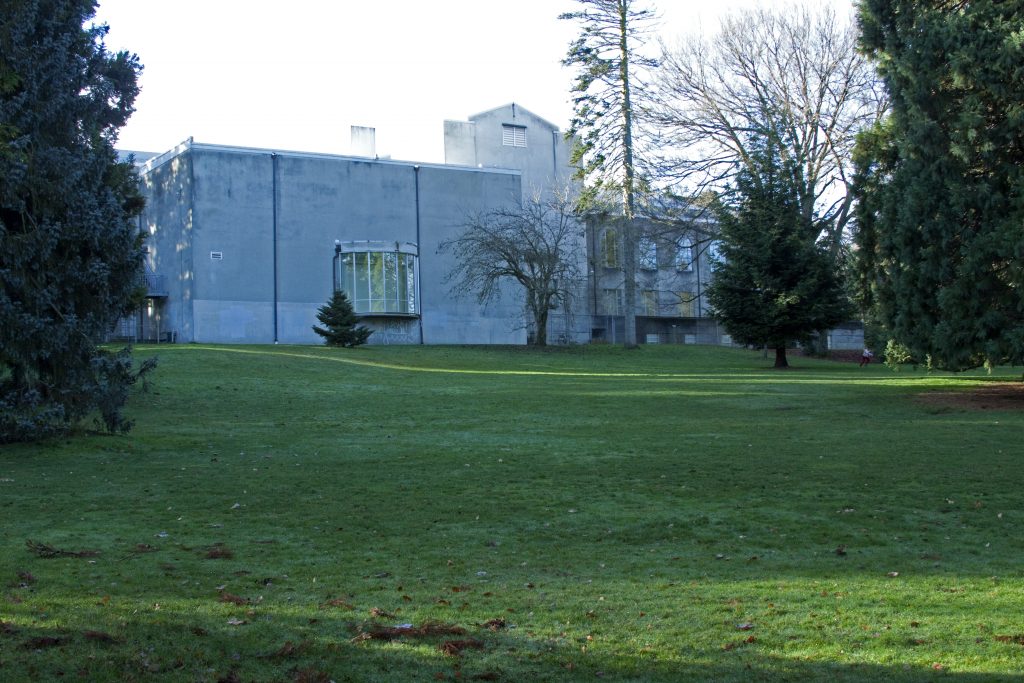 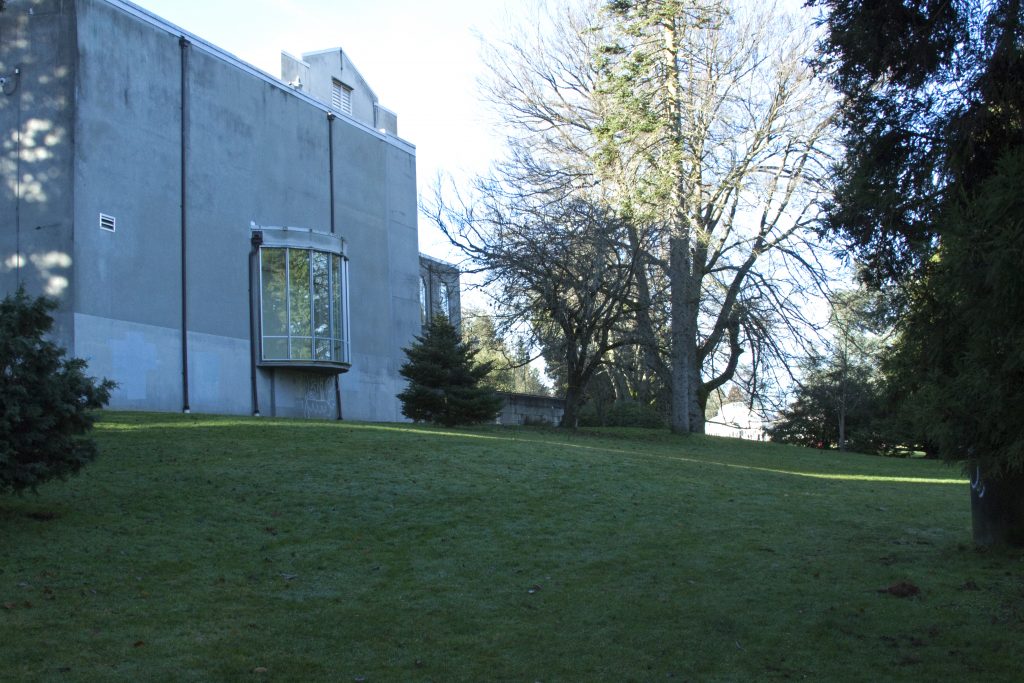 Here’s the southeast corner of the building: 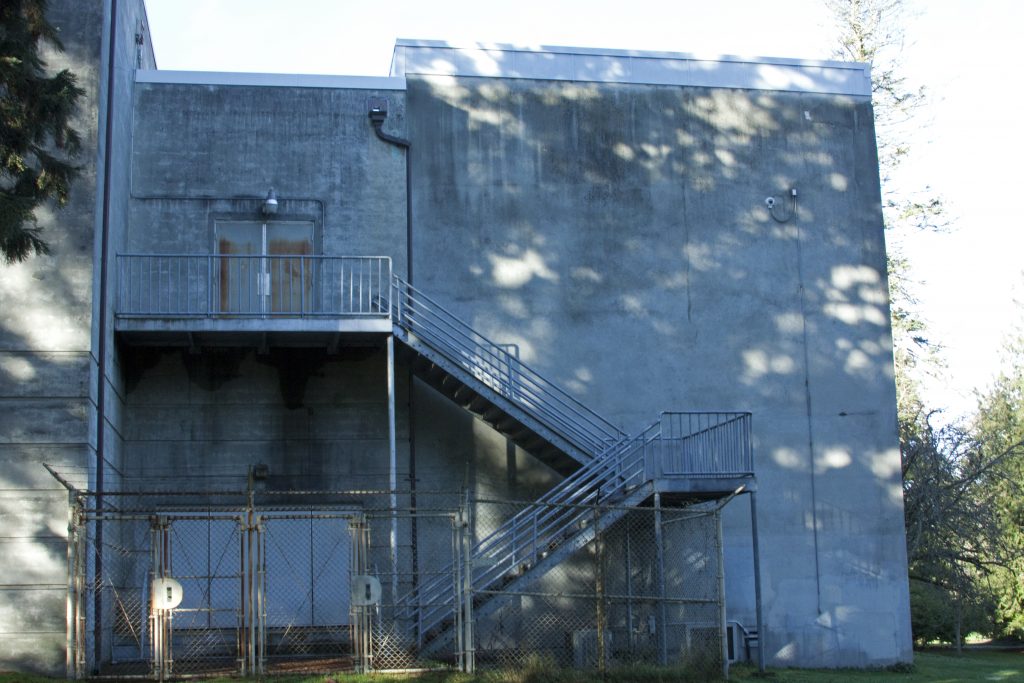 And here’s the north corner, including the loading dock: 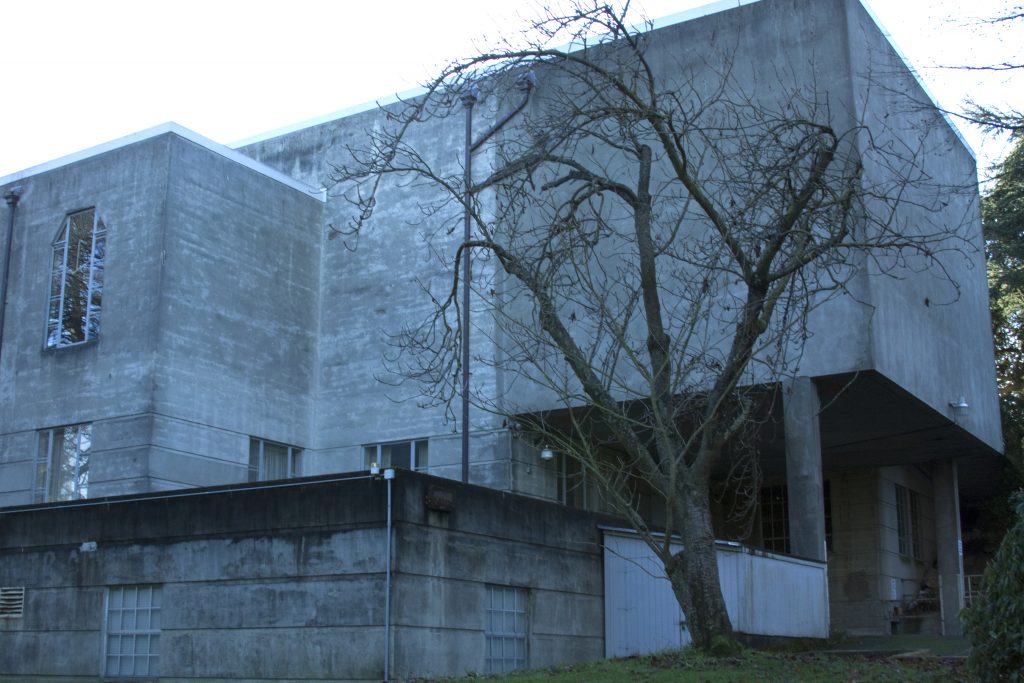 Let’s be honest: it’s a sad-looking building from the back.

The new expansion does three things. On the north end, it replaces the existing loading dock and adds a new freight elevator. On the southeast end, it pushes the 1954 expansion out further east. In the center of the rear face, a new middle-floor glass walkway is added. The new expansion adds a significant amount of exterior glass, with the intent of bringing more of the surrounding nature into the experience inside the building. 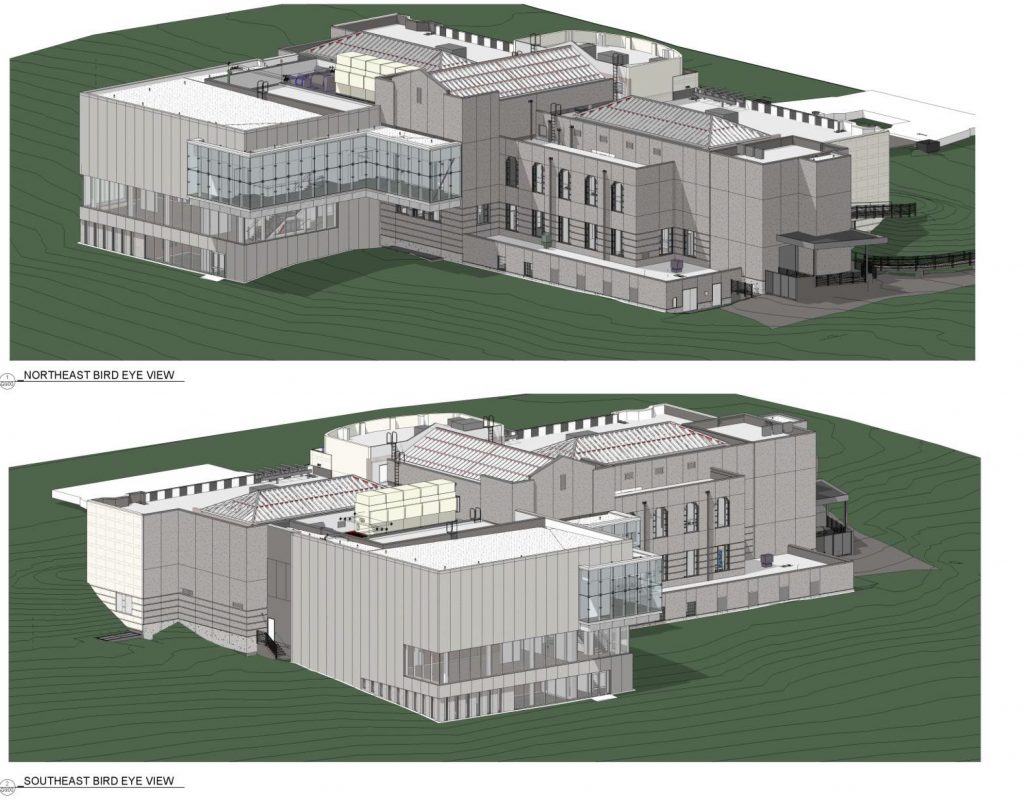 So let’s look at the concerns raised by the opponents of the plan.

First, does it encroach upon the valuable park and open space in Volunteer Park?  Barely; the building expands from 0.8% of the park land to 1.1%. 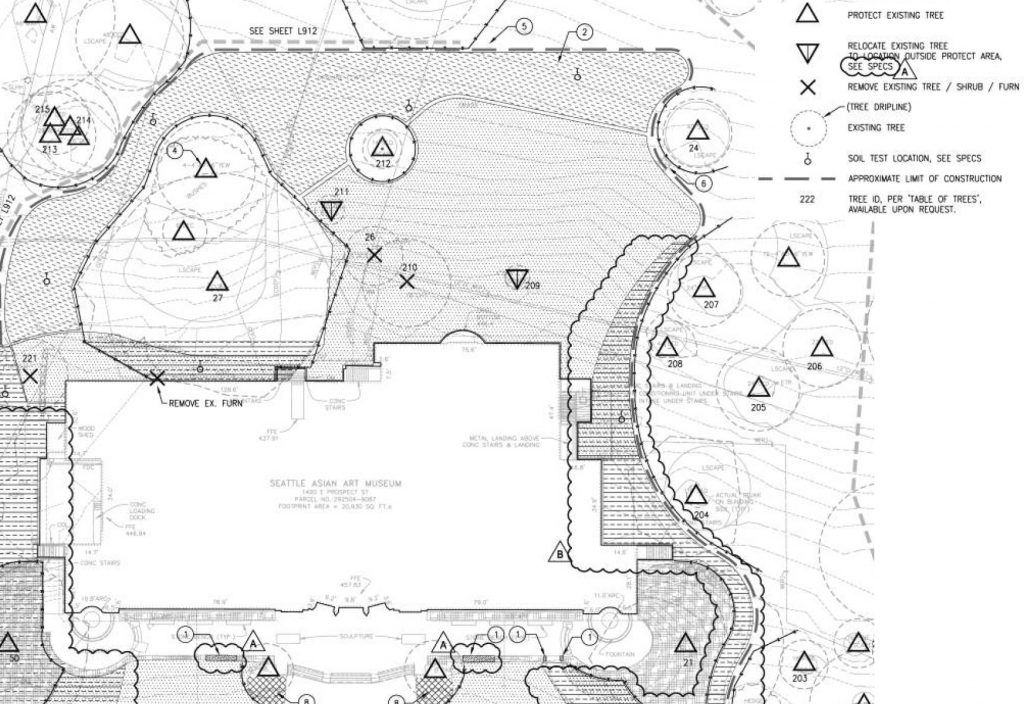 Four plants are removed, and two are relocated. Click on the photos below to see them: 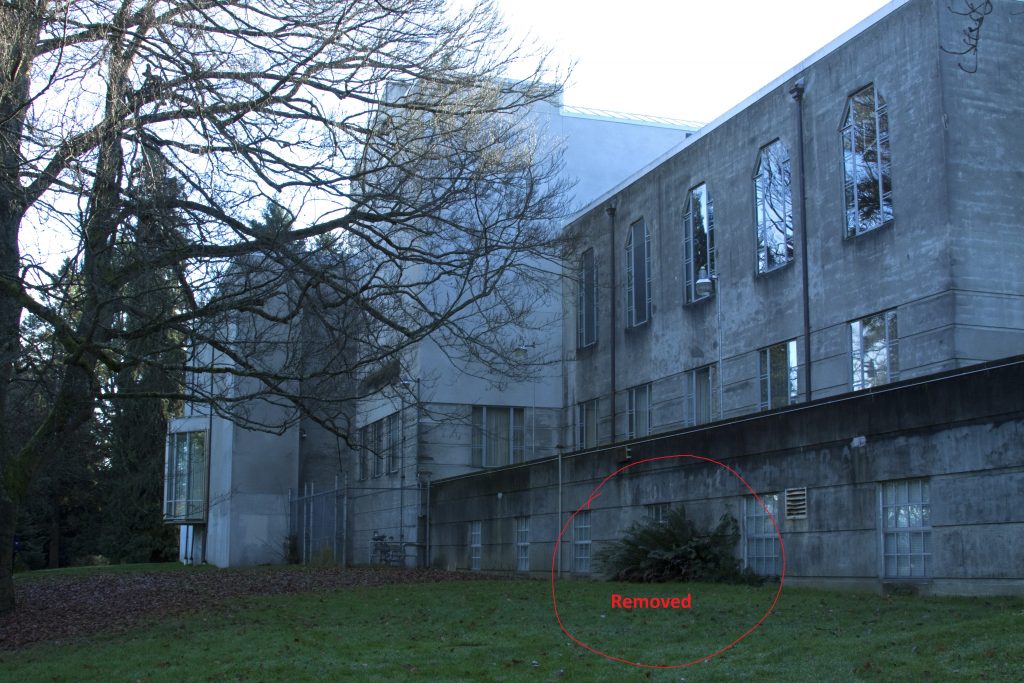 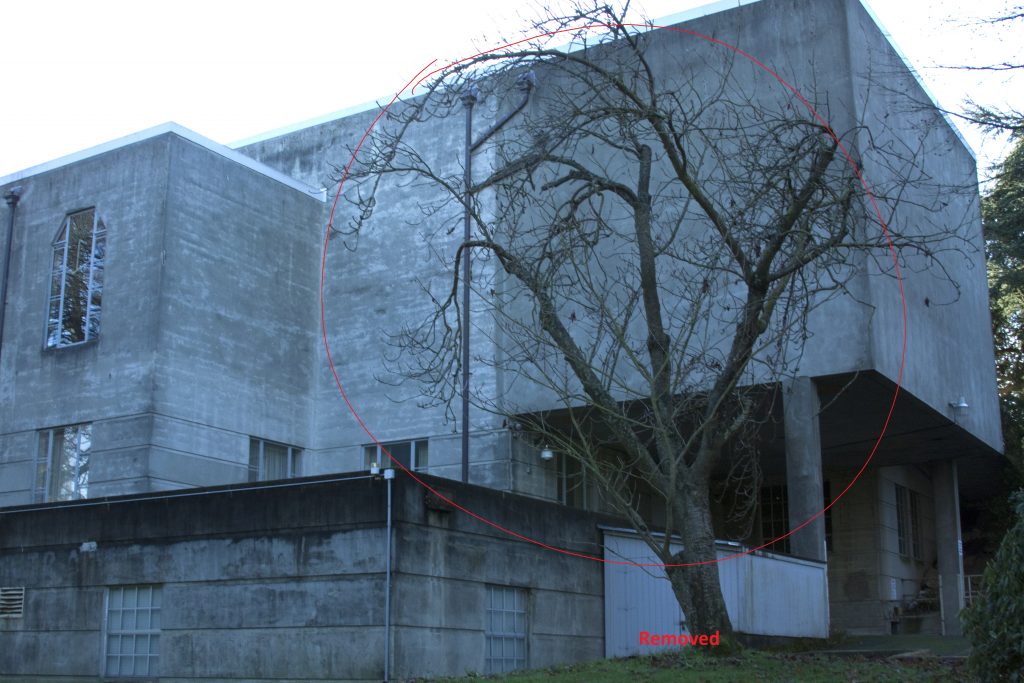 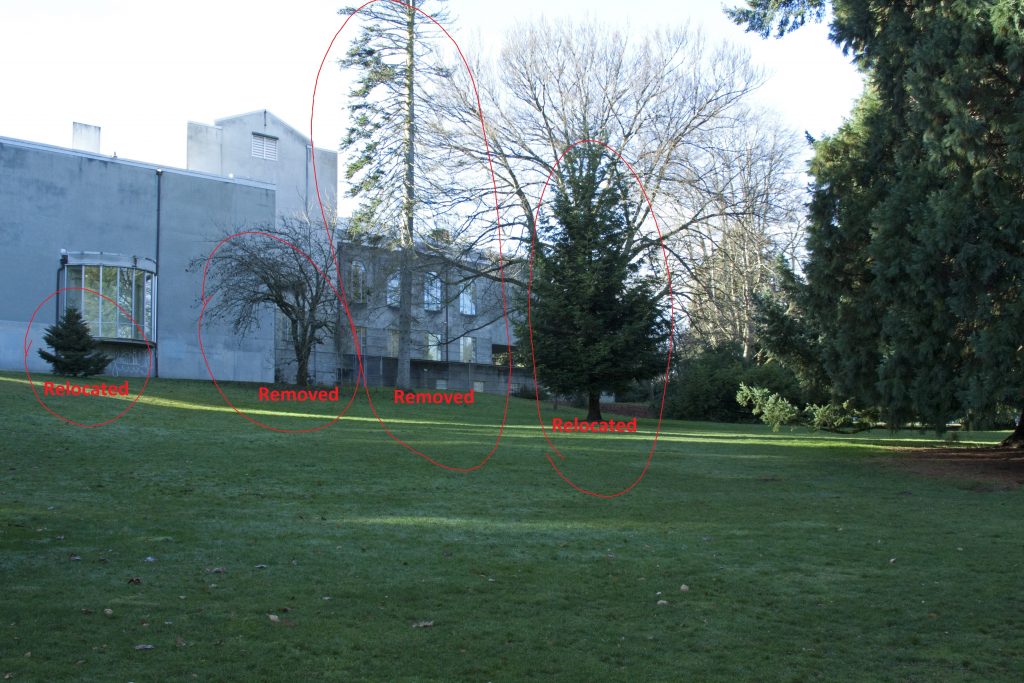 Are these plants consequential? The tall tree in the bottom picture brings me some heartache but that’s the only one of the six; the tree on the north side of the building (middle photo) is arguably too close to the building, and its lean and overhang suggest that if its root system hasn’t already done damage to the building’s basement and foundation, it will when it inevitably falls.

The critics also assert that the open lawn space is important to the park, while supporters of the project claim that it’s underused and “unactivated” park space that invites crime and drug users. When I walked around the space over the weekend, on an unusually warm and sunny January afternoon, there were several people walking dogs through the area, and even one brave couple relaxing on a blanket on the somewhat soggy grass. There were no signs of  drug paraphernalia, which might simply mean that the Parks Department is doing a good job of cleaning up the area. The graffiti on the building, though, is disconcerting. The area is adjacent to 15th Avenue and (as can be expected for parklands) is not well lit. To that point, the critics argue that the large amount of glass windows and doors in the proposed expansion areas would ruin the natural feel of the park in this area; unlike most city parks which close at dusk, Volunteer Park is open until 10pm. No doubt the proposed expansion will “activate” this part of the park with museum-related foot traffic and gatherings. 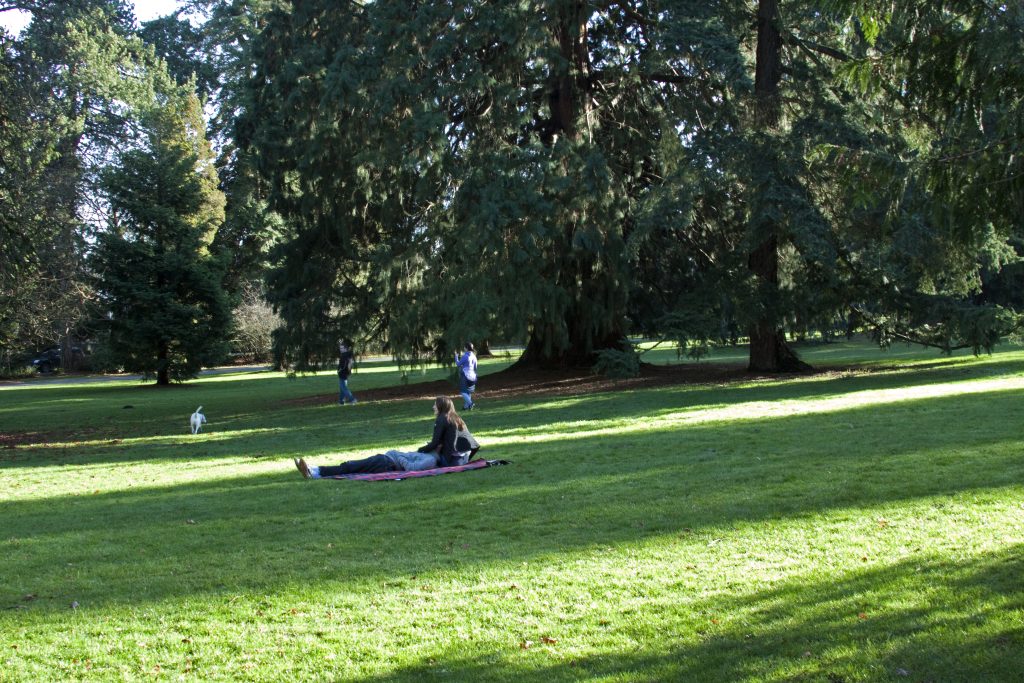 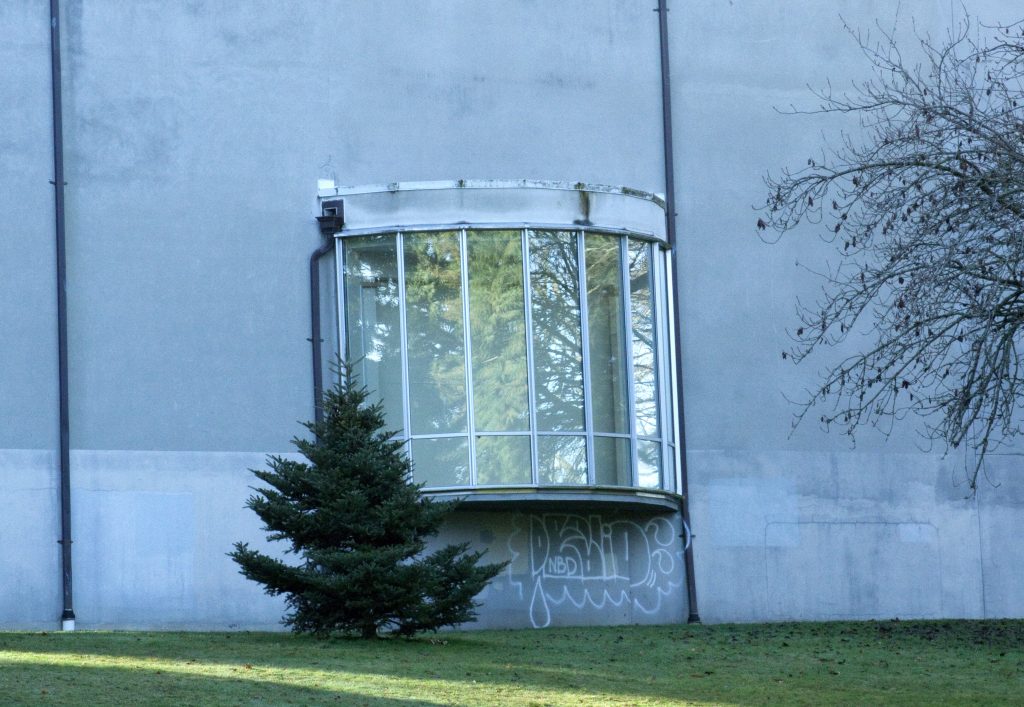 Third, as to the building height and slope: the opponents make much of height restrictions that they say the proposed expansion would violate because it would be built into sloping terrain. The letter of the law measures building height by the point in the building with the highest altitude above sea level, and the expansion areas don’t increase that.  Also, the existing building has three floors, though the “basement” level only has half-windows. You can see that clearly in the photos above, particularly of the northeast corner.

The new expansion does indeed bring the building farther down the eastern slope, dropping ground level by about five feet: less than half a floor, but enough to expose the lower half of the basement level. You can see the drop on the contour lines in the construction drawings (click to zoom). 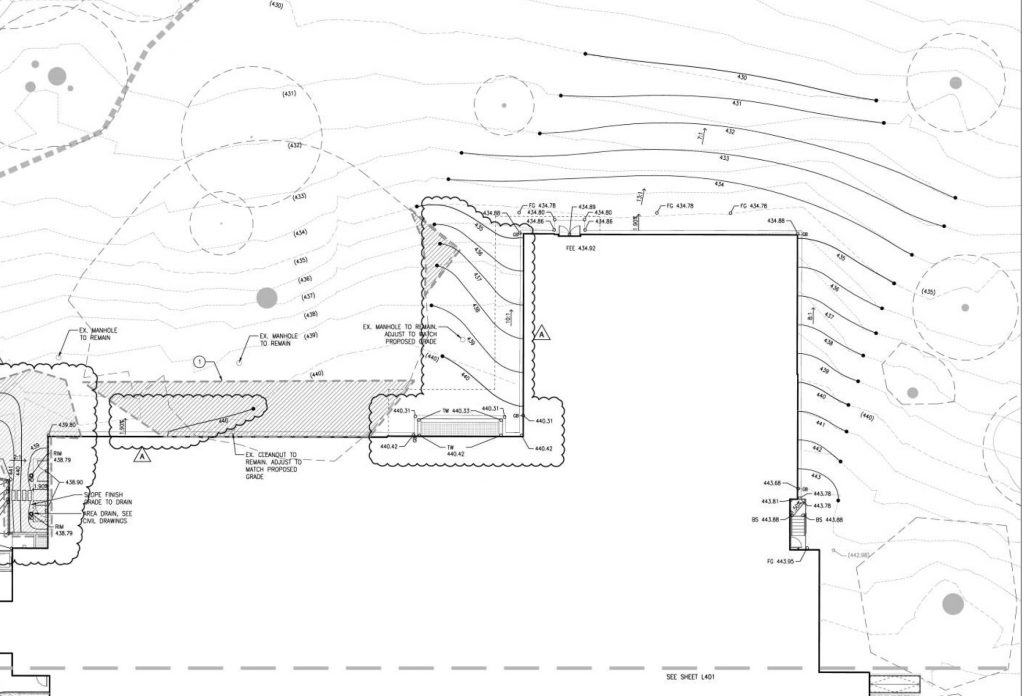 The old low point was 439 feet above sea level (ASL) in the northeast corner, and 440 feet ASL in the southeast corner. With the proposed expansion, the new low point is 435 feet ASL. It doesn’t add any more floors to the building, either above or below the existing ones. It doesn’t lower the basement level or raise the roof line.

Finally, there is the issue of the lease, and the city’s commitment to major maintenance for 55 years. That is an interesting policy question, which the City Council should consider carefully. Keep in mind, though, that it’s a city-owned building that has historic landmark status, and the building has been leased continuously to the Seattle Art Museum continuously since 1931 — 86 years.  The building isn’t going away (nor should it), which means that even if the city terminates its lease with SAM, the city is still on the hook for maintaining a historic landmark that it owns.

In December when the lease extension was first presented to the Council, Council members Juarez and Harrell criticized the package of public benefits that it contained, mostly for its lack of quantifying the value of the benefits and the detail of the outreach programs. Since then, the city and SAM have sweetened the deal. 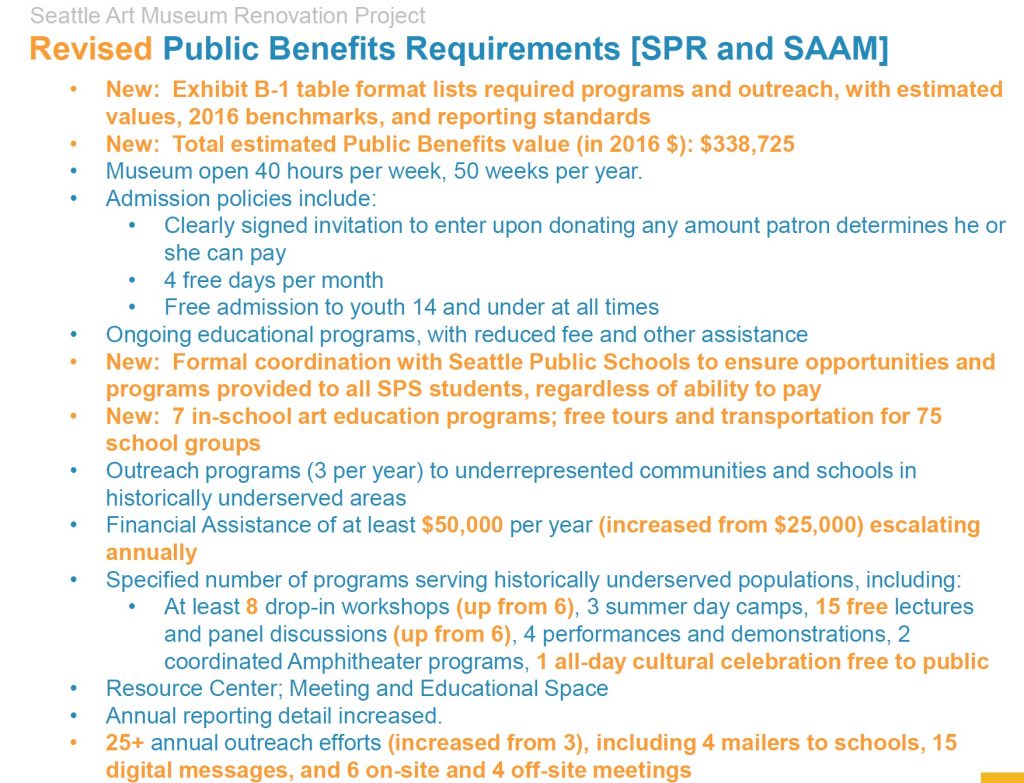 In 1975, the lease was amended to set admission fees at $1 per person.  In 1994, another amendment was signed that changed it from a required admission fee to a “suggested fee” of $8.50 consistent with what SAM was asking at its new downtown location — but anyone who couldn’t afford that could gain admission simply by paying what they believed they could afford, as little as one cent. That policy will continue on with the new lease agreement, though the “suggested admission fee” will adjust over time.

The agreement — technically a “lease and operating agreement” — is a little unusual in that SAM pays no rent, and in fact receives payments from the city for ongoing operation of SAAM. 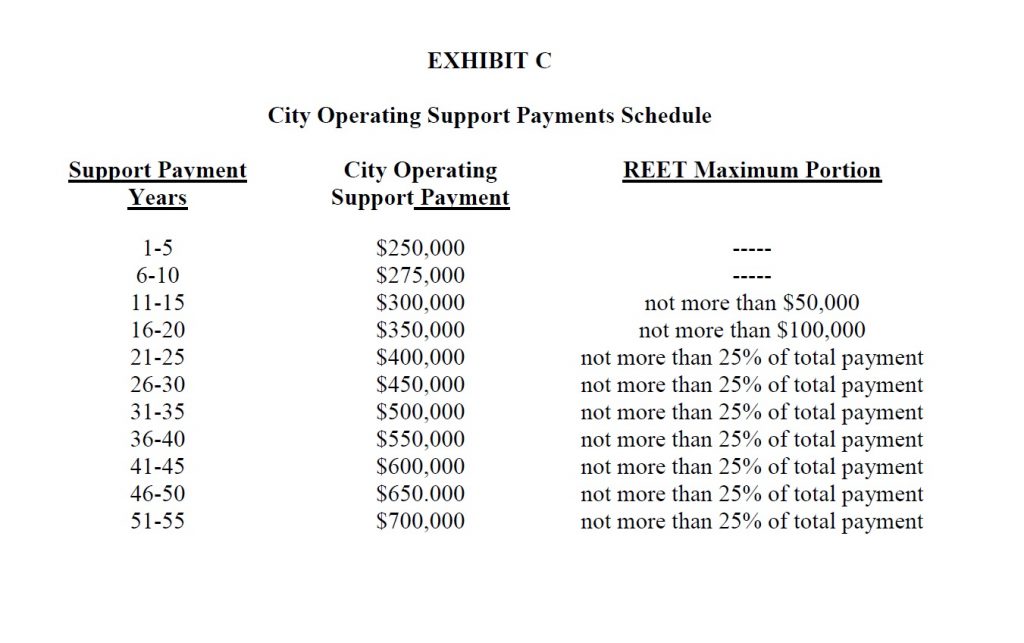 Apart from its own internal operating expenses, SAM must also cover “all routine and regular repairs and maintenance” to the building.  It’s not unusual for non-profits such as SAM to be subsidized by local governments, so if it helps you can think of it as separate rent payments from SAM to the city and subsidies from the city to SAM, collapsed into a single payment structure. Still, the numbers get large in the out-years, so the question of a 55-year commitment is valid and should be considered carefully by the Council.

There’s one final bit of legal tidying-up that needs to be reckoned with: Voter Initiative 42, passed directly into law by the City Council in 1996. It sets the rules by which the city can dispose of park property, or change the use of city property from “park and recreation” to other uses. Doing so requires the city to pass an ordinance declaring that it was necessary to do so, and to receive equivalent property in return that would be dedicated to park and recreation use. Some opponents of the SAAM expansion believe that the project violates Initiative 42.  The city believes that operation of SAAM is a “recreational purpose” and in fact spells that out explicitly in the proposed ordinance ratifying the lease and operating agreement. However, that question might form the basis of a legal challenge to the expansion plan.

The Council will continue its deliberations on the SAAM expansion this Wednesday afternoon, when these and possibly other issues  will be on the table.