This week the City Council will take up some proposed changes to the city’s laws prohibiting discrimination by explicitly broadening the definition to include sexual harassment and extending the time allowed for filing charges.

All four currently have essentially identical definitions for discrimination. The legislation would extend that definition to include sexual harassment, which is in turn defined as:

“Sexual harassment” means unwelcome sexual advances, requests for sexual favors, sexually motivated physical contact, or other verbal or physical conduct or communication of a sexual nature between two or more individuals if:

1.  Submission to that conduct or communication is made a term or condition, either explicitly or implicitly, of an individual’s employment;

2.  Submission to or rejection of that conduct or communication by an individual is used as a factor in decisions affecting that individual’s employment; or

3.  That conduct or communication has the purpose or effect of unreasonably interfering with an individual’s work performance, or of creating an intimidating, hostile, or offensive work environment.

It’s an interesting legal approach. Both state law and Seattle Municipal Code list “harassment” as a criminal violation, but the definition is narrow and many forms of sexual harassment would not necessarily be included. Rather than broaden that definition to be more inclusive, the city is arguing that sexual harassment is a form of discrimination on the basis of sex and therefore a civil rights violation enforced by the Seattle Office of Civil Rights (SOCR). I asked Herbold (by email) why she chose this approach, and she responded:

“SOCR only enforces civil claims that can be filed as an administrative charge, as opposed to dealing with harassment as a misdemeanor that would go through SPD and the City Attorney’s office.   This is the specific issue identified in my 1/12 letter to the Mayor (attached). It is also an example of how Councilmembers internally try to focus our individual efforts on those issues related to specific departments within our own committees.  Amendments to the SMC related to malicious harassment would rightfully be heard in Councilmember Gonzalez’ committee.”

The act of defining “sexual harassment” turns out to be a double-edged sword, as explained in a memo by the Council’s central staff (emphasis mine):

Currently, the SMC does not define “sexual harassment.” Defining the term will make explicit what the City considers to be sexual harassment, which could be helpful in clarifying whether a person is experiencing it or another type of illegal sex- or gender-based discrimination. It could also explicitly inform persons not aware that the City’s anti-discrimination laws provide them rights and remedies of which they can take advantage. For a person considering whether they have an actionable claim, it would create an easily referenced code definition. However, there may be unintended consequences associated with codifying this definition in an ordinance.
Neither federal, state, nor city statutes codify a definition of “sexual harassment.” Thus, rather than interpreting an existing definition, the courts have developed a body of case law interpreting how illegal discrimination on the basis of sex in the form of sexual harassment must be proven to establish a successful claim. Creating a static definition in the SMC would set a standard for proving a claim that may or may not be consistent with existing case law, narrow the universe of circumstances and behaviors currently encompassed in the case law regarding sexual harassment, and limit judicial interpretation in cases brought under a City court claim to how the SMC defines the term.

The penalties for violations differ significantly between harassment and discrimination under the Seattle Municipal Code. A conviction of harassment under the city’s criminal code carries a penalty of up to $5000 and/or one year imprisonment.  Violating the various provisions of the civil rights anti-discrimination code carries different penalties, mostly civil instead of criminal:

Currently complaints of discrimination must be filed within 180 days for three of these four categories, and within 1 year for the fourth. The proposed legislation would extend the deadline to either 12 or 18 months. The logic behind this for discrimination cases in general is that it may take more than six months for the discriminatory behavior to become known. For sexual harassment, the reasoning is more specific. As Herbold explains, “It often takes time for people to come forward because of shame, fear of reprisals, denial, history of prior sexual violence, and lack of information about what constitutes sexual harassment and how to report it.”

State law requires most complaints with its Human Rights Commission to be filed within 180 days, though real estate unfair practices can be filed up to a year afterwards and whistleblower retaliation up to two years.

The Council’s central staff explained the reason why two of the new statutes of limitations (SOL) are 12 months and the other two are 18 months (emphasis mine):

Here’s a handy chart from the staff memo with the relevant city, state and federal statutes of limitations (click to expand): 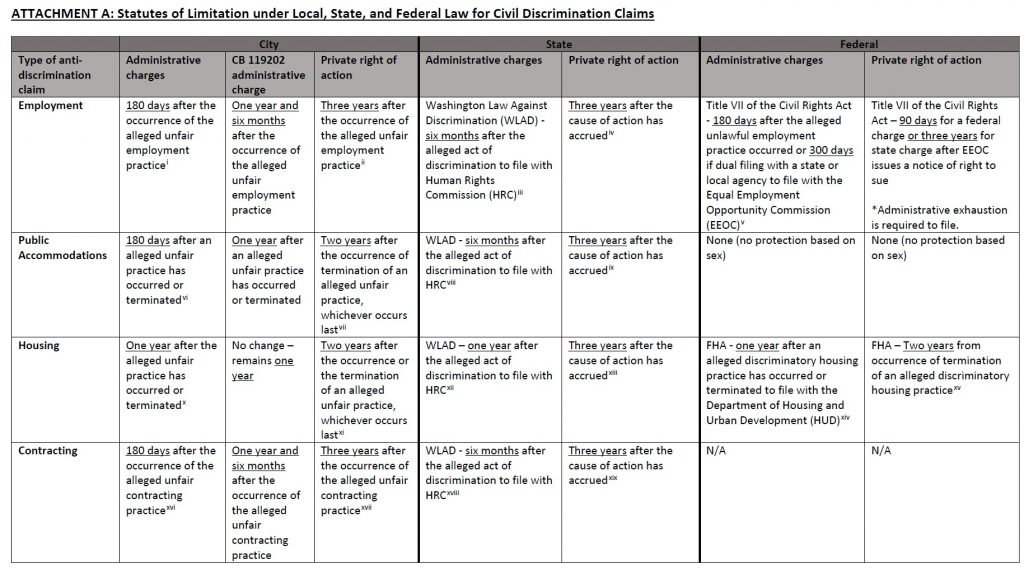 The legislation will be taken up Tuesday morning in Herbold’s Civil Rights, Utilities, Economic Development, and Arts Committee.