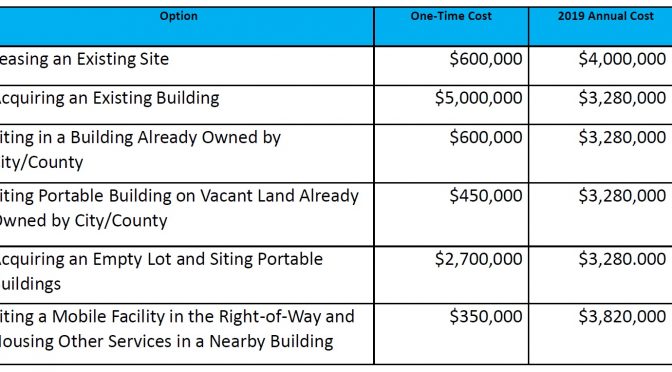 The city has published a feasibility study on establishing a “safe consumption” site in Seattle, and for the first time we have a sense for how much it might cost.

Last fall as part of the budget process, the Council set aside $1.3 million for establishing a safe consumption site, along with a proviso:

“None of the money appropriated in the 2018 budget for the Human Services Department (HSD) may be spent for the establishment of a Safe Consumption Site until HSD has conducted an assessment of the project and filed a report of the assessment with the City Clerk. The assessment must include a full cost estimate and a location for siting that HSD deems viable, and a scope and timeline of necessary capital improvements to create the Safe Consumption Site. “

Last week, the Finance and Administrative Services and Human Services Departments sent a memo to the Council delivering that feasibility study. They will present their findings in person this Thursday morning to Council member Mosqueda’s Housing, Health, Energy, and Workers Rights Committee.

They looked at six different options for how to site the facility:

The startup timeframes vary widely, from as short as six months for options 1,3 and 6  to as long as 3 years for option 2.

The costs are also varied, especially for initial build-out: from $350,000 for option 6, up to $5 million to acquire a new building. After build-out, the ongoing annual costs range from $3.4 million to $4.1 million. Here’s a chart they made that lays it all out (click to expand): 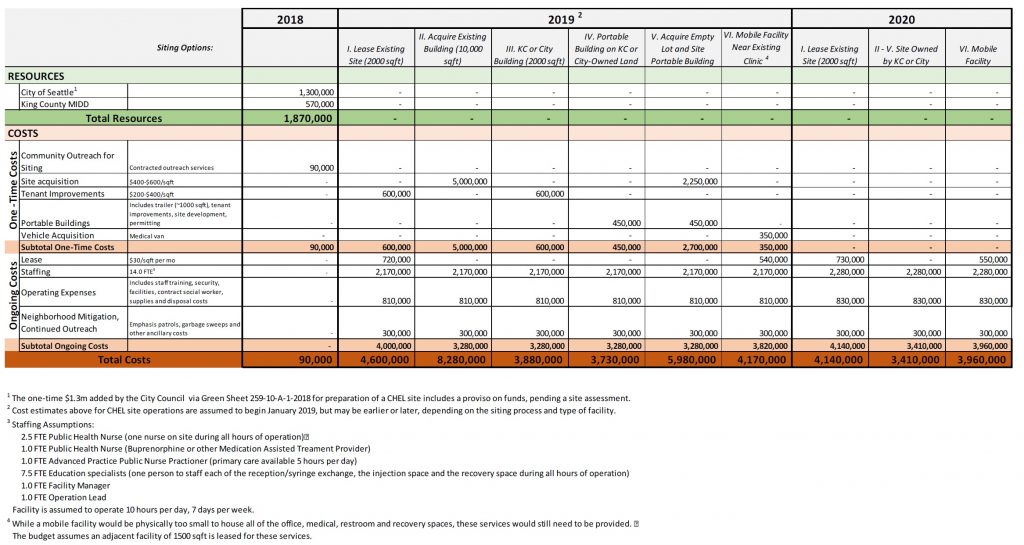 And here’s a high-level summary:

Part of the costs is for community outreach, both for the initial site selection as well as $300,000 per year for “neighborhood mitigation and continued outreach.” That includes “emphasis patrols” and garbage sweeps.

The report explains that the City of Seattle and Public Health of Seattle-King County (PHSKC) will share responsibility for site selection. PHSKC will provide data on where heroin deaths have occurred, as well as expertise on operating medical facilities. The city will provide information on neighborhoods and areas that “meet the criteria for siting,” and ensure that public safety departments are part of the decision-making process.

The report also says that PHSKC will be responsible for operating the safe consumption site, either entirely on its own or by contracting out some services to partner organizations. It doesn’t specify, however, how the city and PHSKC will share the costs.

According to the budget proviso, the report is also supposed to include a viable site, so the city’s work is not yet done. That task will be the most difficult part, and if the city is smart it will include community outreach into the siting process so it doesn’t run into the same issues as with the siting of the Navigation Center.

There’s a lovely little catch-22 here: the outreach related to siting will require FAS and Human Services to tap into the $1.3 million the Council reserved, but the proviso says that the money can’t be touched until a viable site is identified.  It’s easily solved, though: the Council just needs to amend its proviso — if it’s happy with the cost estimates.

That said, if the outreach and site selection is successful and proceeds apace, the $1.3 million isn’t nearly enough to cover startup and first-year operational costs for a safe consumption site under any of the six options, so either the Council will need to find more money, or PHSKC will need to bring some money to the table later this year.